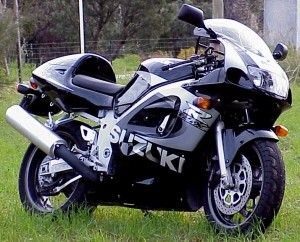 he GSX-R 600 is a race-replica if there ever was one.  Racer boy ergonomics, peaky top-end power, reasonable brakes and fantastic

Surprisingly enough though I didn’t find the little GSX-R that uncomfortable (I am 179 centimetres tall), the riding position does put a little bit too much weight on your wrists around town, but no worse than other sportsbikes, in fact I would say it is more comfortable than many.  Now I bet your thinking, where did he ride it ? To the shops and back.  On one of the occasions I had the bike we did a 500 kilometre day with no problems.  A reader just rode around Australia on a 1997 bike so they can’t be that bad in the comfort department.

Luggage can be strapped to the GSX-R quite easily as it has 4 large hooks below the fairing under the passenger seat. Of course the seat your straps wrecking the paint work.  On that note the Suzuki’s paint work is not as hardy as that produced by some of the other manufacturers and is the quickest to lose it’s lustre.

In the looks department my personal favourite is the traditional white & blue model, but I think if you went to the time or expense of getting the rims polished on the black and silver model it would look fantastic.  The GSX-Rs have always been some of the greatest looking bikes and these latest ones are no exception.

Suzuki have cut a few corners to keep the price down below the 13 grand mark.  The most obvious one being an un-polished pipe and daggy looking muffler.  My first addition would be a better looking exhaust system, then ditch the rear footpegs and trim the rear fender down a little  to clean up the look of the back of the bike.  Some mirror located indicators (ALA Blackbird) would complete the look and really make it stand out from the crowd.  Of course there is plenty of race fairings and solo seat tail panels available for the GSX-R so if you really want to be different grab some aftermarket fairings, paint them up the colour of your choice and customize to your hearts content.

Instrumentation is fairly good for this class of bike with a digital odometer and two tripmeters.  These can be selected on the LCD panel that is mounted in the conventional speedo.  The tachometer contains the temperature in centigrade on it’s LCD panel along with a low oil pressure warning light.  A bank of four idiot lights are to the right of the gauges and contain lamps for neutral, indicate, fuel and high beam.

he engine is a 10,000 rpm + or nothing happens kind of unit.   Carburation could also be better, with the bike being a pit of a pain in the mornings.  When starting the bike it was impossible to keep a steady amount of revs up without it climbing to over 4000 rpm on the choke, so I would then back the choke off slightly and the revs would fall down below 2000 rpm and it would stall.  Very annoying indeed, but this may be rectified by some careful tuning at it’s 6000 kilometre service.

The GSX-R feels reasonably slim between the knees, it’s very light weight is instantly felt as soon as you climb aboard.  The bike is claimed to weigh in at just over 170-kilos dry and I have no reason to doubt it as wet weight measurements have put it around the 200-kilo mark.

When out in tighter bends the peaky top-end can make you feel like a budding Doohan.  You approach a corner hard on the brakes, changing down furiously to keep in the powerband.  If you don’t do this it responds a little asthmatically.  If you get it right though you really do feel like a boy racer and enjoy the hell out of this bike.

For me this was one of the main fun factors that made the gixxer so enjoyable, you can really feel as though you are getting the best out of the GSX-R when riding it hard.  It rewards you with the most magnificent turn-in of any bike I have ridden.   You can be a ham-fisted ape and brake until the apex, then just slam it on it’s side and the front just dig’s in with total confidence, doing things like this on some softer bikes is a recipe for disaster.  The little GSX-R 6 however just giggles at you and dares you stick it in harder next time around.  If I was in the market for a race-bike I really think the GSX-R 600 would probably be my choice, probably ’cause I am one of those ham-fisted apes I spoke of earlier.

It is surprising to me however that Suzuki did not choose to put some better brakes on that magnificent chassis. The brakes are quite good, but these days we have come to expect brakes that are better than good.  These have room for improvement.

The clutch is typical Suzuki fare, excellent.  The gearbox on this test bike still felt a bit tight as it had less than 4000 kilometres on the clock.  This like the rest of the bike was at it’s best when being ridden hard with plenty of revs onboard.  I am sure the gearbox will get better at the lower speed stuff as soon as it has got more mileage under it’s belt.

The 1999 GSX-R600 has been subject to a recall for the replacement of it’s cam-chain tensioner which has become prone to not keeping much tension at all.  The kit (supplied and fitted at no charge under warranty) fixes the problem of cam chain tension but also unfortunately can shorten the life of the timing chain.

I would still expect the GSX-R to out live a few of it’s competitors though as the GSX-Rs have always been reasonably strong.  You see a lot more old GSX-Rs getting around these days than you see YZFs or ZXRs and that is something that may influence your buying decision when these bikes hit the second-hand market. 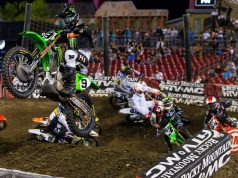