For those of us who truly carry red blood in our veins, there is not much you can fault when looking at the new CRF450R.  (Ed’s Note – Mark has won Australian Supermoto, Dirt Track and Long Track Championships on Honda and his family ran a Honda dealership many moons ago.)

The Honda in my opinion is the sexiest 450 in its class. The radically new Yamaha YZ450 certainly comes close but in aesthetics at least the Honda is still the best looker of the 450 bunch.

Enough about the looks, as I have been told for a long time by mum that looks aren’t important; it’s what’s on the inside that counts. It was time to put my mum’s theory to the test and take this new weapon from Honda for a spin.

The test took place at Terry Hay’s Racetech Suspensions Headquarters in Wallacia. We owe Terry a big thanks for letting us use his track at short notice, and after a quick inspection it was easy to see that this track was going to throw up more than enough challenges for the Honda and give us a good indication of how this bike was going to perform.

In 2009 Honda launched its all-new Fuel Injected CRF450 with a host of major upgrades, not only to the styling, but also to the engine. Electronic Fuel Injection, along with completely new bodywork saw the 2009 model receive the biggest updates since the bikes’ inception in 2002. For the 2010 CRF450, Honda has tweaked a number of small yet significant workings in a bid to have the machine continue its strong sales and race track results. Both the engine and chassis have come in for some upgrades. The ECU programming has been altered to help the off-on throttle response. This is an upgrade designed to help with rider feel while exiting the corners and provide better control. There is also a new engine auto decompressor system, which enables easier kick starting.

On track, the Honda has a very useable spread of power, with great low to mid range torque. The bike definitely started a lot easier than the 2009 models that I have ridden and I think the CRF450 is by far the narrowest to sit on out of the big four Japanese manufacturers. This makes the bike feel responsive and nimble and you could be quite easily mistaken for thinking you were seated aboard a 250. While the CRF engine is tractable and smooth off the bottom, it does lack a little of the top-end horsepower that the Yamaha and Kawasaki have and also that some of the earlier model CRF’s were renowned for. Tractability is impressive with the fuel injection change definitely making it easier to get on the throttle. This was very noticeable at Terry’s track as it was dry and slippery with a few off-cambered hard pack corners. This would usually throw up a challenge for the bigger bore machines, but the Honda was fluid in being able to put the power to the real wheel.

The suspension has also come in for some minor improvements both front and rear with a redesigned piston in the rear shock aimed at providing a smoother ride and better acceleration over rough terrain. The front oil height has changed along with some valving adjustments and a new oil seal for the front forks. The rear suspension felt great on the rough sharp edged bumps and didn’t seem to have any problems in tracking in a straight line while accelerating hard over some rough patches. The front suspension handled the bigger bumps and over jumps with ease although felt a little firm on the little bumps. Probably the biggest positive chassis-wise for me with this bike is its steering. It feels the steepest in its class and holds a line under trailing throttle no problem at all. It allows you to maintain your body weight nicely over the centre of the machine and inspires confidence in getting the bike in and out of the corners quickly.

My only real criticism comes in the form of front brake and clutch. The rear brake works a treat but the front brake lacks initial bite and this progressively gets worse over the course of a moto. This criticism is not levelled at Honda solely as all of the Japanese 450s that I have tested this year suffer from the same problem. They just need to put a bigger rotor on as standard. The clutch feels better than the 2009 model but the lever action still feels a little strange and on a tight MX track the free play increased slightly over the course of a moto.

Overall the 2010 Honda CRF450 is a great motorcycle, its engine is smooth and tractable, ergonomics sensational, and looks like sex on wheels. As for Mum’s theory…. well in this, case looks do count and so does what’s on the inside!

Honda and Yamaha will once again go toe to toe in a battle for supremacy on the sales front with their 450 motocross machines. Each bike as always has its positives and negatives. On the chassis front I think the Honda just sneaks ahead of the Yamaha as the red bike turns and holds its line mid corner a little better, but the engine in the Yamaha best the Honda’s power delivery and the ease with which mapping changes can be done on the Yamaha gives it another ace up it’s sleeve.

Only a true back to back slugfest on a variety of terrain will really settle the Honda versus Yamaha score once and for all. But here Trev has asked me to pull no punches and tell it as I see it. Well after testing the two machines over two consecutive days, but at two very different tracks, and I reckon the Yamaha is the slightly better package over all. That said however, they are not miles apart and Suzuki’s RM-Z450 is also worthy of being in the same ring.

We also have to take into consideration that we are still to test the 2010 Kawasaki KX450F. If Chad Reed’s recent domination in the 2009 Super X series is anything to go by, the KX450 might just be the surprise package. Stay tuned, for the Kawasaki KX450 test before Xmas.. 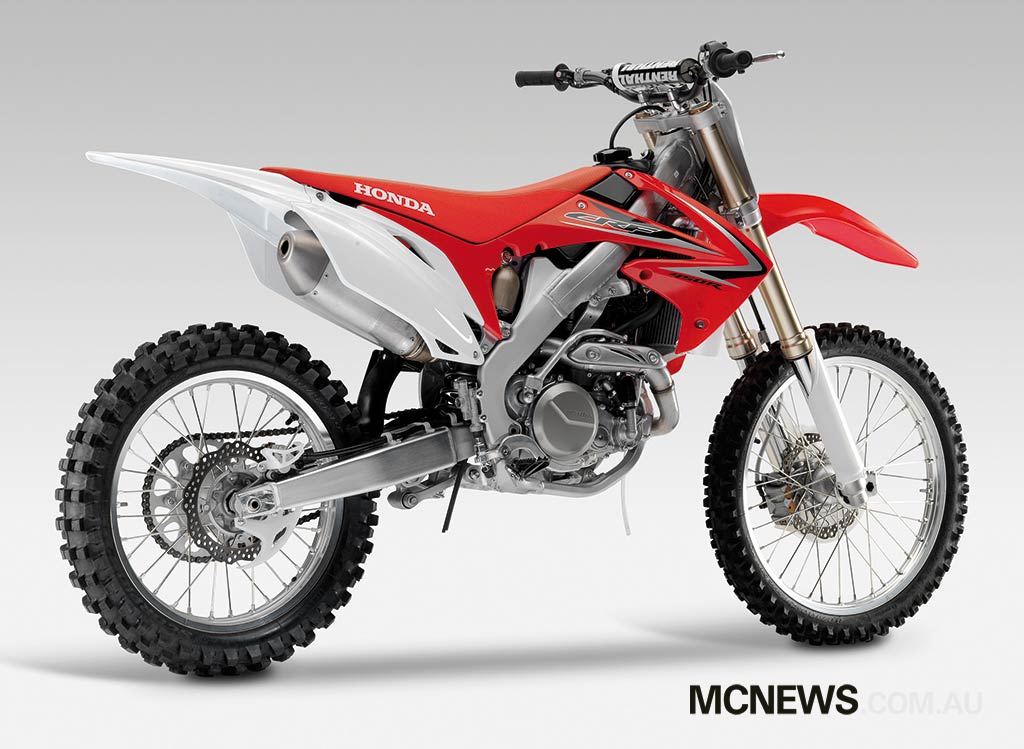