There can be no understating the importance of BMW’s R 1200 GS to the marque. It is the biggest selling roadbike in a number of European countries, selling in numbers that dwarf the relatively tiny size of the Australian market. Over the past three decades, GS has formed a legend of its own and is at the forefront of the current adventure-touring boon to motorcycling.

I first came to respect the R 1200 GS after it underwent a huge revamp in 2004 which improved the dynamics of the machine out of sight. Steady improvements and clever implementation of electronic systems, that themselves seem to take another huge leap forward every couple of years, along with little nips and tucks here and there have since honed the machine in to a truly formidable, all-roads touring weapon. The final innovation that really gave me the, ‘I would definitely like to own one of these’, feeling was the move to twin-cams in the last iteration of the air/oil-cooled Boxer. This gave the engine that last bit of top end shove that I always thought the machine lacked, to really provide everything for this hoon. It was the final piece that completed the puzzle and gave the GS that extra pep up top to round out the package as a do-it-all machine.

For 2013, BMW jettisoned all these finely honed pieces and have replaced them with an all new board game. Almost every component is new, yet it still feels unmistakably GS, just better in every way.

The on-road performance has clearly reached new levels. A well ridden example of the outgoing model could be hustled very fast, especially in tight and twisting terrain. The new one does it faster, easier, safer and more comfortably. It feels every inch like the next generation of machine it is.

Less steering effort, faster and more accurate change of direction, vastly improved stability at lean thanks to more sporting sized rubber, to the way the new engine pulls out of the turns, it is all a big step forward that has made the GS a more formidable weapon than before.

The semi-active suspension helps the machine hug the road. Entering a turn, the front firms for braking while maintaining enough suppleness to deal with surface irregularities. On exit the rear permits just enough sag to provide good drive while leaving enough travel and damping in reserve to deal with any bumps. Without fuss or any intervention from the rider it just adapts and continuously adjusts to give the rider the best contact with the road.

On some of the best undulating ribbons of tight and tortuous pieces of blacktop in the Victorian high country I could not fault the suspension one iota. You hardly even notice the electronic suspension doing its thing until you think about how impossibly composed the bike remains under maximum duress through a tortuous ribbon of undulating bitumen. Repeat that same piece of tar on something similar without the on-the-fly suspension electronics doing their thing and just what has been going on underneath you really hits home. It just plain works.

It is better than having an Ohlins technician along for the ride. This thing interprets its own data to adjust on the fly better than I could explain to a suspension tech what the bike was doing wrong in the first place!

This technology is available elsewhere and not exclusive to BMW. The difference that BMW make is, in my opinion, that their team of test riders and engineers calibrate and map these systems better than the others. The Japanese brands should either offer them salaries they can’t refuse or abduct them.

The engine shares only its bore and stroke with its predecessor, every component is new. It has more balls everywhere with impeccable throttle response and is smoother through every part of the RPM range. It really leaps out of slower turns on a delightful rush of torque that actually hits pretty hard when ‘Dynamic’ mode is dialled in. The previous twin-cam Boxer was deceptively fast, the new donk makes more of a statement when the twist grip is hit hard. This adds up to more riding pleasure for the aggressive rider.

Bottom end response is crisp and very strong, the mid-range sublime but some might be disappointed up top. Personally, I can’t say I was. But if powering out of 150km/h+ sweepers are your game then the extra motor of something more powerful than the 125hp of the GS might be more up your alley. In the real world the GS has more than enough oomph for any given situation. For those that like their grunt delivered a little softer and the traction control system more responsive, Rain or Road modes can be selected. There is still ample grunt available to short-shift and just ride the huge wave of bottom end torque between bends without fuss, and with a little less shudder than before when asked to pull out of the basement.

Off-road the more potent engine is perhaps a little harder to manage and definite benefits are derived from selecting Enduro mode which softens response and allows a little more freedom to slide. The Enduro Pro mode is enabled by fitting a plug under the seat into the wiring loom and is recommended only for very experienced riders. Enduro Pro mode gives a more aggressive throttle response, and allows much more lurid slides before the traction control system kicks in. This is the mode experienced off-road riders will enjoy most. Badly corrugated sections of dirt road though still need the traction control system to be switched off as the rear tyre consistently fails to stick to terra firma over the corrugations and sends the traction control system in to meltdown.

Ground clearance is improved over its predecessor. Off-road ability is also improved thanks to the dynamic suspension; the limiting factor off-road is still rider confidence and the size of the machine. The performance differential off-road is not enough, I feel, for most to bother upgrading from the previous model just yet. On road however, the difference is marked and if you like to play hard the upgrade may prove well worthwhile as the new bike is clearly faster everywhere, with less effort and more safety.

The gearbox is also a little sweeter, but still not the most positive cog swapper in existence. The move to a wet slipper clutch from the previous dry clutch set-up is an excellent improvement. The gearbox itself now resides for the first time inside the engine cases in a departure from the previous bolt-up gearbox arrangement. The shaft drive system has also switched sides and now transmits the torque to the left side of the wheel. Despite running on an identical wheelbase as the previous model the new swingarm is over 50mm longer, a significant step forward aiding stability and drive.

The 305mm front disc rotors are now clamped by radially mounted Brembo Monobloc calipers. The rear brake has grown from 265mm to 276mm and is operated by a Brembo two-piston caliper. The brakes are ace and backed up by a brilliant ABS system. It is amazing just how far ABS has come in just the past few years, and for the first time ever I can honestly say I would still leave it on for most dirt sections, only disabling the system for extreme descents that are probably not too smart to be doing on a GS anyway.

The brakes are linked, with application of the front brake also adding a slight settling application of the rear brake. There is no doubt it aids stability and safety under maximum braking effort. If you think differently and this scares you in some way, get over it, you are wrong. With Enduro Pro mode selected off-road, the GS will allow the rear wheel to be locked without disengaging the excellent ABS system on the front.

The calibration, effectiveness and ease-of-use of all the electronic systems have all taken a leap forward – a leap that can be felt clearly from the saddle, without any doubt. And they are now even easier to switch through on the fly than before.

Wheel sizes are up and all launch bikes sported the optional ($580) spoked rims. The front is now a 120/70-19 mounted on a 3-inch rim (previously 110/80 on 2.5” rim) while the rear is now a 170/60R-17 on a 4.5” rim (up from 150/70 on a 4-inch rim). It is a widely known fact that off-road the wider the rim the more susceptible it is to impact damage. On the dirt component of the launch two riders dented their Metzeler Karoo shod front rims to the point of deflation. They were then unable to inflate the tyre unless the tyre pressure control valve was removed and a tube inserted. Now these particular two guys have always appeared to me to have no sympathy for their machinery in the way they ride, and they could have just got unlucky. But it must be said, that I have done heaps of off-road riding on the previous model and haven’t seen rims get dented as bad as these.

For the road component of the launch the machines were shod with Metzeler Tourance Next rubber, the new generation of the popular Metzeler dual-sport tyre. They performed brilliantly. Chasing Cam Donald on a tight and tortuous tarmac section on a hot day, the rear just sliding a little as I cracked the throttle hard at apex with the red mist seriously on. I had rarely ridden this hard, and certainly not in recent times; you feel a bit invincible on the new GS such is its excellent composure. My machine was running 40psi in the rear and 34 up front, after inspecting the tyres at our Merrijig overnight stop I would suggest this is pretty much the right combination. For future shipments we believe more than half will wear Michelin’s freshly released Anakee III, which is also an ultra-impressive latest generation of tyre technology. We rode a Michelin shod R 1200 GS in Portugal and found them mighty impressive, with perhaps even a slight wet-weather advantage over the Metzeler and the tread pattern suggests better off-road performance than the Metzeler, which I think might have a slender advantage on hot dry tarmac.

The adjustable seat for both height and front-to-rear angle is an absolute gem and the GS does a pretty good job of keeping the rider from getting knocked about by the air-stream. The effectiveness of the Dynamic ESA will also contribute greatly to all-day riding comfort as it successfully isolates you from the lumps and bumps of the road.

Optional equipment over and above the $21,250 base price of the GS includes the aforementioned spoked rims ($580), Cruise Control ($500), Alarm system ($505), the optional low seat (790-810mm versus the standard 850-870mm) is free at time of purchase but the optional low suspension will set you back a quite reasonable $250. The real boon for shorties is that for the first time the low-suspension option can now be had with ESA, this will make many people very happy indeed.

The $3150 Dynamic Package includes traction control, dynamic ESA, LED head lights, on-board Computer Pro, loom for GPS and daytime riding lights. My personal preference for spec’ would include the Dynamic Package, spoked rims and cruise control which would bring the price to $25,480 plus on roads.

Unless you can afford one, I suggest not test riding a new GS on your favourite mountain roads. Or you might be going into debt and BMW dealers will be only too happy to sign you up to their, admittedly quite excellent and industry leading, finance package. Don’t say you weren’t warned… 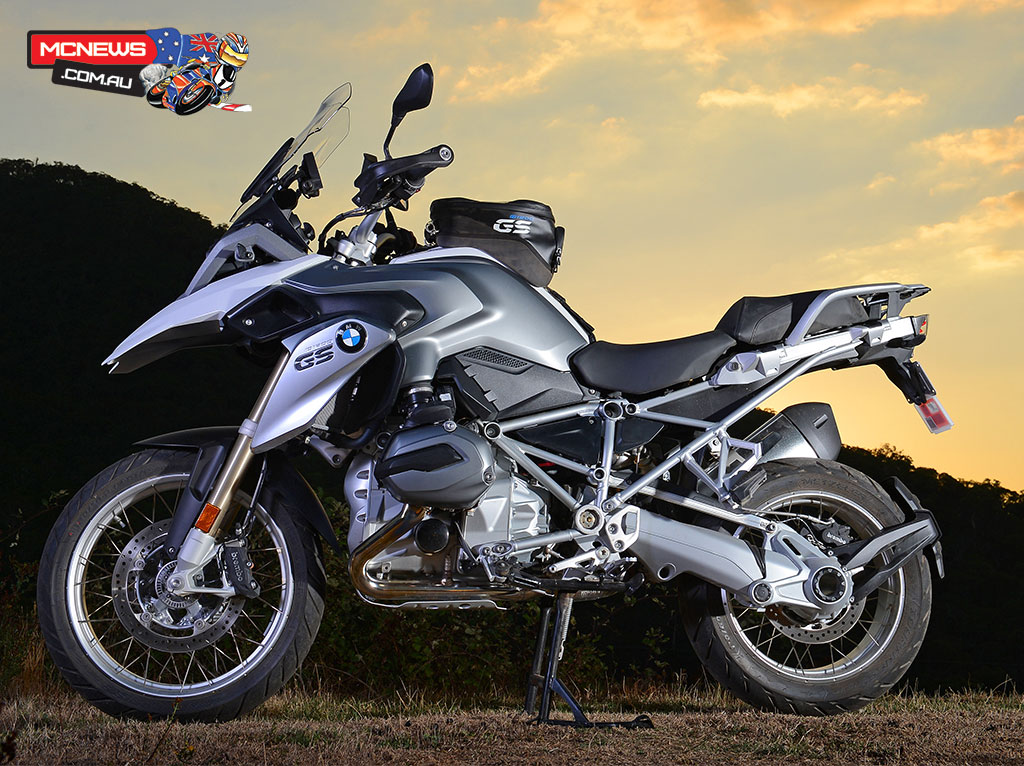 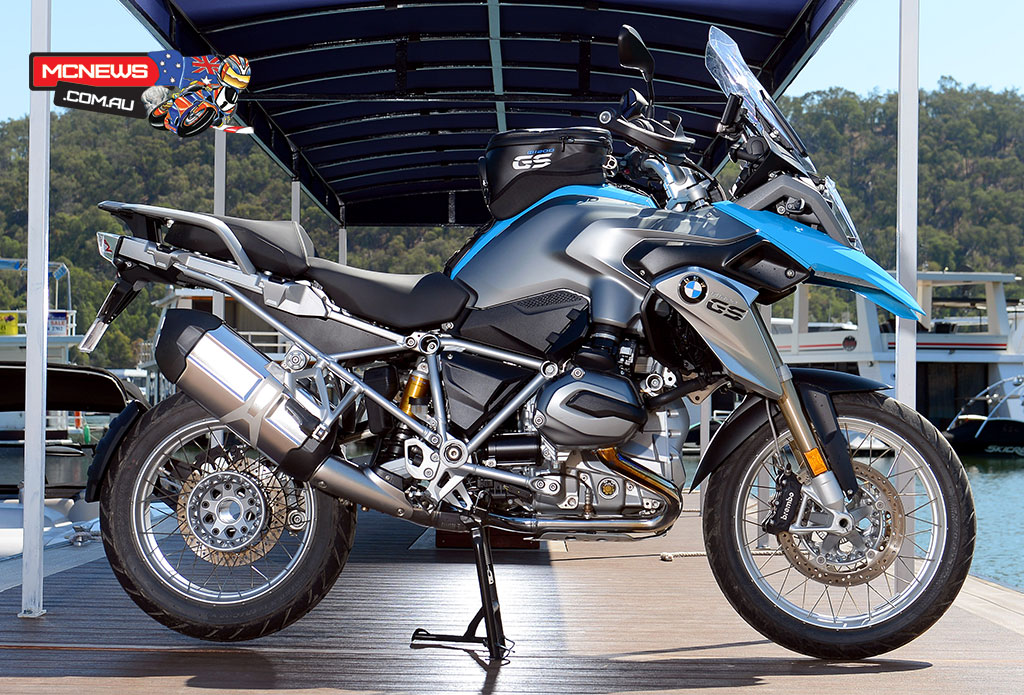