The 2014 AMA Pro SuperBike championship chase went into the Subway SuperBike Doubleheader at Road America separated by just a single point at the top of the order. Three hard-fought days of excitement and drama later, the series left Wisconsin even tighter than it arrived.

Just two rounds and four races into the 2014 campaign, this year’s early season title fight has taken shape as a three-way scrap featuring the three-time king, the perennial contender, and the hotshot upstart.

Monster Energy Graves Yamaha’s Josh Hayes was the weekend’s biggest mover, springing right back into championship contention despite his DNF in Daytona. However, it didn’t come easily.

The Mississippian, who had previously demonstrated an unquestioned mastery of Road America, found himself mystified by his rookie teammate’s incredible speed around the four-mile circuit.

The 39-year-old Hayes came into the venue having won five straight at the track, including two perfect weekends in a row. However, 21-year-old Beaubier came out swinging. The reigning GoPro Daytona SportBike champion posted the fastest time in both the opening practice and provisional qualifying on Friday. Then on Saturday, he topped second qualifying and absolutely dominated the all-new Qualifying 3 session, in which the top 12 qualifiers squared off with a clean slate to determine the race’s front four rows.

Hayes struggled to find an immediate answer for his immensely talented new teammate and rival.

“That’s a good question,” said Hayes when asked how Beaubier was so quick so early in his SuperBike career. “I haven’t really sorted it out yet. Even looking at the data, it doesn’t make sense when I look at it. He’s got a pretty good feel for things. … As far as the riding goes, we’re very, very different riders. It’s been interesting to see what he’s doing when I look at it and try to figure it out. I don’t know that I can turn into riding like Cam Beaubier, but maybe I can improve some things that I do.”

The stage was set for an epic tilt in Saturday’s 13-lap contest. Yoshimura Suzuki Factory Racing’s Martin Cardenas clung on over the race’s opening half, but the sprint to the flag was all Hayes and Beaubier.

Hayes clawed back from nearly a second down and capitalized on a Beaubier mistake to claim a near-two-second advantage of his on with just four laps remaining. However, the rookie ran Hayes down, and overhauled his legendary teammate on the final lap to score the second AMA Pro SuperBike victory of his young career.

“Josh was riding awesome, he was so strong on the brakes,” Beaubier said. “That made it really hard to pass anywhere. I knew that once I got past Josh I had to go. I had to put my head down and see what happened. I saw ‘.5′ on my board and I kept pushing. I made a couple mistakes and almost crashed in the first corner and Josh went by me. Then I over-broke myself going down into turn five and I thought it was over.

“I put my head down and pushed as hard as I possibly could. I was making a couple mistakes just trying to catch back up, but I was able to close the gap with about a lap and a half to go. I got by him in the first corner. I knew he was super strong on the brakes so I just tried to block the inside a little bit and I made it to the finish.”

Beaubier knew coming into Road America it would be tough to beat Hayes.

“Josh has this place dialed,” said Beaubier. “Coming into this weekend I knew I was going to have to do everything I could just to stay on pace with him. To come out like I did … I can’t think of a better day. That was probably the best race of my career right there.”

While Beaubier threatened to steal the show and firmly establish himself as the man to beat in 2014, inclement weather and inexperience caught the rising star in Sunday’s rematch.

Beaubier crashed out of a fight for the lead with Hayes and Cardenas near the Sunday race’s midpoint. The skies opened up a short while later, bringing out a red flag and race restart. Beaubier reentered the race from pit lane, despite being a lap down.

He ran off track once and then crashed a second time in the difficult conditions. However, his persistence paid off in the form of a 13th-place result, allowing him to stay atop the championship fight with 89 points and two race wins to his credit.

Hayes, meanwhile, called on every bit of racing experience to tiptoe around the circuit in the rain, showcasing the full depth of his skills. In the end, the race was red-flagged a second time just as Hayes was about to take the checkered flag, earning him his second win of the season.

As a result of his weekend one-two finish, Hayes is back within one victory of taking the title lead with 84 points.

“I’m really happy for my team,” Hayes said. “Big thank you to Monster Energy Graves Yamaha for providing me with what I need to win races.”

The win was SuperBike victory No. 43 for Hayes, and it’s not one he’ll soon forget.

“It was harder than the hardest lap I’ve ridden around this racetrack just to negotiate around,” said Hayes.

The late downpour didn’t favor Cardenas, who dropped from victory contention to a seventh place result. However, it did work out for the title hopes of his Yoshimura Suzuki teammate, Roger Hayden.

Hayden wound up earning third in the wet to go along with his fourth place showing on Saturday. Despite admitting Road America has never been one of his strongest tracks, the Kentuckian actually managed to make up a point on Beaubier on the weekend and is now even with him at 89 points.

“Things are coming along,” Hayden said of his first season with the decorated Yoshimura outfit. “I struggled this weekend but that was more the rider. I’ve always struggled at this place, never really did any good. I went faster than I ever have here, so I’m happy about that. I’m glad to get out of here with some decent points and go on to these tracks with the points lead, I think. Now I get to go to some tracks I’m really good at, so I’m looking forward to it.”

“(Saturday’s) race was pretty good,” said Cardenas after picking up his second podium of the season, “especially the first part. The last half I lost contact with the guys, they were faster than me. I did the best I could but I didn’t have anything for them in the second half of the race.”

Among the next group of finishers, two riders in particular have stepped up early in 2014: ADR Motorsports/Sic/Motul Fly Racing’s David Anthony and Yoshimura Suzuki Factory Racing’s Chris Clark.

Anthony has reconfigured his team this season, allowing him to focus more on his riding, and it’s paid dividends. The Australian has finished in the top five in all four races this season, including a skillful charge up to second in the wet at Road America.

“Definitely, things are coming around this year,” said Anthony. “We’re putting the effort in and changing things around and doing things a lot differently. In the past, I’ve been the main guy behind the team, but I’ve been able to step back this year. I brought in some good people and that’s the difference. I can focus on riding which I’ve never, ever been able to do. It’s always been business first and then riding, but now it’s the other way around. I was actually a little disappointed with the weekend. I’ve been fifth pretty much the whole time, a second off where I need to be. I was down in spirits all weekend. To get a podium, the way it ended up, yeah it’s good. But we need to find something at the next couple tracks for sure.”

Meanwhile, Clark scooped up his third fourth place finish of the season, and even pushed Hayden for a podium at stages during Sunday’s race.

“It was definitely an experience, that’s for sure,” said Clark. “I’ve really been focusing on the rest of the season as a whole. The Yoshimura Suzuki crew did a great job, so I have to thank the team for a positive weekend overall. On Sunday, fortunately, my crew was able to make a decision that benefitted us for the restart. I started seventh and then got up to fourth. But then it was just pouring rain and I could hardly see, so I just tried to hold on and not take too many risks. I think at Barber, we’ll have another good result because the Yoshimura Suzuki GSX-R1000 is working well, so I’m looking forward to it.”

KTM/HMC Racing’s Chris Fillmore was hoping for a big weekend at the HMC crew’s home track – even if Road America’s characteristics don’t suit the RC8R as well as those of some of the upcoming circuits. However, Fillmore struggled with nagging electrical issues throughout the weekend. Still, he and his crew managed to fight through the difficulties enough to snag finishes of fifth and seventh place.

Several others managed to score at least one top-ten result on the weekend. Foremost Insurance Pegram Racing’s Larry Pegram continued to acclimate to the EBR 1190RS and rode it to sixth on Sunday, while Team AMSOIL Hero EBR’s Cory West took his EBR 1190RS to ninth the day before.

“Well, Saturday didn’t start the best but we rallied back,” Ulrich said. “We discovered a small problem with the electronics this morning on the bike we’ve been riding. I really like that bike because it has some different components on the chassis and it was the bike we ran our best time on. Unfortunately, it developed a small misfire, and we diagnosed it and thought we had it fixed. I went out on the parade lap and another problem surfaced, so we had to come in and start on a spare bike instead.

“(Sunday’s) wreck was a little mistake. I was riding really hard to keep up with the guys up front. Sometimes when you’re pushing the limits, you fall off. Overall, it was a good race up until then. It’s disappointing to end up in the gravel trap, but the good thing is we’re okay. Unfortunately, the bike broke a handlebar from the fall, so we were unable to continue. We had a strong ride going but I am a little disappointed after last weekend

“I went over two seconds faster than I did last year here. That shows the progress we’ve made, but based on how I was having to ride the bike (Sunday), it seems like we have some more progress to make. We’ll learn from this, go to Barber, and try to continue to improve. We live to fight another day.” 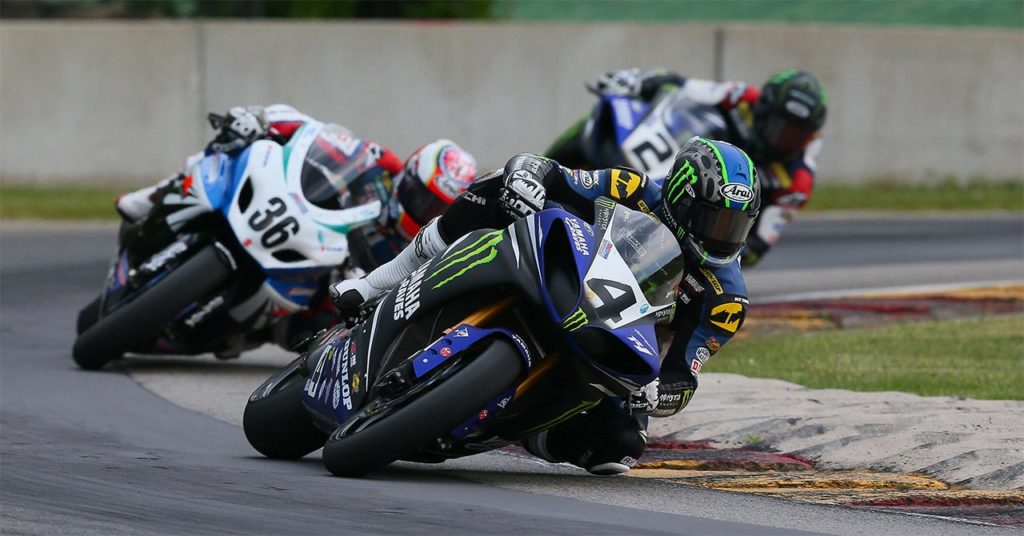 Round 3 of the 2014 AMA Pro Road Racing season will take place at Barber Motorsports Park in Birmingham, Alabama for the Triumph SuperBike Classic on June 21-22.