Shane ‘Shakey’ Byrne leads the MCE Insurance British Superbike Championship into Kent for his home round at Brands Hatch this weekend (18/19/20 July), but the triple title-winner is under increasing pressure from his rivals.

Byrne has won six of the eight races this season for Rapid Solicitors Kawasaki, but Australia’s Josh Brookes and Japan’s Ryuichi Kiyonari have beaten him this season and are both setting their sights on a winning performance at Brands Hatch. Milwaukee Yamaha’s Brookes has won four of the last five races on the Grand Prix circuit and, after a recent test in Japan ahead of the Suzuka Eight Hour race, is anticipating a strong weekend.

Brookes said: “At Knockhill we weren’t miles off but it just didn’t work out and we came away with no podium credits, so I left unsatisfied and now we want to get to Brands Hatch and go for the wins. This weekend I am focused on Shakey and trying to beat him. He is the one at the top of the standings and therefore he is the one we need to finish ahead of on track. My team-mate Tommy (Bridewell), and also James (Ellison), can throw in good races, but for me there is only one person I am focused on.”

Brookes holds second place in the standings by just three points from Lloyds British GBmoto Racing Kawasaki’s James Ellison. The Kendal-based rider had his run of podium finishes cut short at Knockhill in Scotland, but is aiming for the team’s first win in the Superbike class this weekend.

Ellison said: “I have written off Knockhill as bad luck and now we have to come back stronger at Brands Hatch. I think the Grand Prix circuit means we will have four or five of us fighting for the wins and you need to be on the ball from the start. I am aiming for wins and I have been from the start of the season. Perhaps it will happen at Brands Hatch – the team’s home round, which would be one of the best places to celebrate!”

All eyes will be on triple champion Ryuichi Kiyonari this weekend after his stellar performances at Knockhill which saw him claim his first race win since 2011 and BMW’s first in the history of the Championship.

Kiyonari said: “I want to show that I wasn’t just lucky at Knockhill and I can fight with the top group. The bike is getting better all the time and we know BMW and our team can win. Before people said ‘Kiyo is finished’ and now I have shown I can still win. I just need to push hard, concentrate and keep winning because we want to fight for podiums at every round.”

Tommy Bridewell (Milwaukee Yamaha), Chris Walker (Lloyds British GBmoto Racing Kawasaki) and Stuart Easton have all scored podium finishes but are yet to score an elusive win this season, whilst American John Hopkins and Czech Jakub Smrz are pushing for their first top three finishes of 2014.

Milwaukee Yamaha head to Brands Hatch in Kent this weekend for the fifth round of the MCE Insurance British Superbike Championship as both Josh Brookes and Tommy Bridewell prepare to battle for victory on the Grand Prix circuit.

Brookes arrives at Brands Hatch in second place in the standings and has shown strong form on the Grand Prix circuit in the past – the Australian has won four of the last five races on the 2.433-mile track. The Australian returns to MCE BSB action feeling confident of a return to the podium following a recent test in Japan ahead of his appearance in the Suzuka Eight Hour race.

Bridewell heads to Kent targeting a return to the top three after missing out at Knockhill last time out and is feeling bullish about his hopes for the weekend. The Devizes-based rider is yet to score a victory in the championship, but is determined to add to his podium finish from the second race at Snetterton to build on his fourth place in the overall standings.

Brookes said: “I know all of the tracks, but with each one I seem to anticipate the performance of the Yamaha, because different circuits suit different bikes. At Knockhill we came away with no podium credits, so I left there unsatisfied. That was on my mind but we want to get to Brands Hatch and go for wins. It has been good for me to go to Suzuka for the test since Knockhill, although it is a completely different motorcycle and track, it resets your mind and I think I am coming back this weekend sharper.

“This weekend I am focused on Shakey and trying to beat him. He is the one at the top of the standings and therefore he is the one we need to finish ahead of on track. My focus is to beat him in both races. My team-mate Tommy (Bridewell) and also James (Ellison) can throw in some good races, but like I say, for me there is only one person I am focused on.

Bridewell said: “I was a bit disappointed to not have been on the podium at Knockhill, so I want to come out fighting at Brands Hatch. We have shown good form over the past few rounds and we have made some big steps forward and have shown we can be consistent. The team has worked hard to turn the season around after the first two rounds where it wasn’t quite right for me and if we can make that same progress this weekend then we can be fighting for the wins – one hundred percent.  I can’t wait to get started this weekend now.” 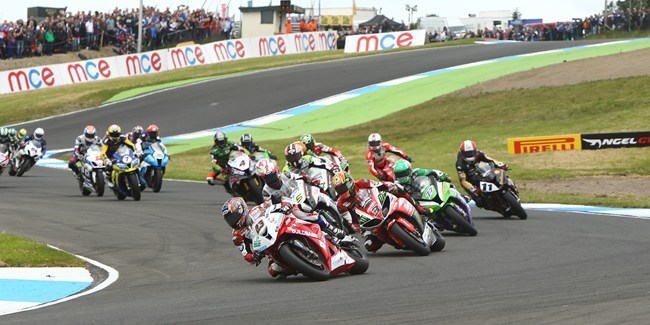 Tom Sykes - In search of the perfect lap

Gallery B from Winton ASBK Testing