by Trev
in ASBK, BMW News, Formula Xtreme, Motorcycle News, Motorcycle Racing
A A
Share on FacebookShare on TwitterShare

RRR: Glenn Allerton, congratulations on your third Australian Superbike Championship, only two rounds in the ASBK this year, but it sounds like that last round was pretty hard fought with a fair bit of competition from your former teammate Linden Magee and also Jed Metcher, who as you mentioned, is also a World Champion as well.

Glenn: “Yeah, thanks Phil, it wasn’t an easy way to win the Championship, it was a very tough weekend, with the changeable conditions all the time. The races on Sunday were run in patchy conditions with still a fair bit of water on the track and we had slick tyres, which is not ideal al Phillip Island, but it feels great to be a three times champion.”

RRR: And one of the things about that Phillip Island is that it’s hard to try and figure out what tires you’re going to use, because the track has a habit of drying pretty quickly but also rain can come at any time and you’ve got to make a decision that’s going to last for the entire race distance, haven’t you?

Glenn: “Absolutely, once they call the race a wet race and whatever tyres you go out with, they’re not going to stop it for you if you’re on slicks and all of a sudden it rains. We’ve had that situation a couple of times in the Evo Unlimited races throughout the weekend, where we started out on a drier a track and then it rained on half the track and we had to stop and make a decision to go full wets. But like you say, this is the sort of track that dries very fast because of the high winds there and the new surface, it drives very quickly. But on the weekend we were lucky enough to get through both races on the superbike with slick tyres without having to stop the race, but especially the last race was very dicey though, through turn 12 and all the way to the finish line was completely wet and actually with spray coming off the bikes and we were on slick tyres, it’s one of the fastest corners in the country, it was difficult but still a lot of fun.”

RRR: I reckon your years and years of experience at running at the front of the Australian Superbike Championship was probably one of the reasons why you realised in race 3 that there was no point throwing the Championship away and trying to win the race, that you just did what you had to do to try and bring the bike home and score the required points.

Glenn: “No. I mean, if you watched the result, you probably would think that, but during the race, at the start, I was thinking I needed to stay on but towards the end of the race I got pretty keen on trying to win the race. And I was actually leading and we had a small problem with the fuel starvation with the bike and it’s an issue that we haven’t had before, but the second as I came out of Honda corner on the last lap, had a big surge and lost power and then it cleared itself and then I made it all the way up by the top of circuit and as I came out at turn 11 it shut off completely, but you know how much momentum we have on drive between turn 11 and turn 12, so we still had enough momentum to roll over the finish line and still finish second, so that was pretty lucky.”

RRR: Now, one of the other things about the weekend was that you didn’t just wrap up your third Australian Superbike Championship, but also the Evo Championship as well, tell us the difference between the two motorbikes. I think unlike World Superbike where Evo is the lesser spec, in the ASBK this year Evo was the higher spec machine.

Glenn: “Yeah, basically it’s an unlimited category, you can run whatever you brung. So you can run whatever you want in there and it was the biggest field and you know it’s funny, everybody wants to go at production racing, but if you looked at the fields in both series it’s the unlimited field that has the biggest grids, so I don’t think that argument’s settled, that production racing is the way to go. But I actually raced the same bike all weekend, I raced my FX-ASC bike all weekend, because we wanted to do some development work and try and make the front end work a little bit better, because Phillip Island is a very front end orientated circuit. And we made some gains there because when we get to Winton we’re really going to need the front end to be working strong, because it’s a very front end heavy track with a tight switchback, so that was the main focus and obviously to try and win the Championship, that was just going to be a little cherry on top of the pie. And to be honest with you it’s hard to believe that I’m three times Champion, when I started out on this journey if you were going to tell me I was going to win three Superbike Championships I probably would have called you crazy.”

RRR: The other thing is though too that the relationship you have with Wayne Hepburn, Shane and all the guys at the NextGen Motorsports team, that really started quite a few years ago when essentially you were a battling privateer trying to run your own team and they came in towards the end of the year I think it was and gave you a little bit of assistance and brought you in under their wing, they were actually running Shannon Johnson I think on the KTM at the same time, but it’s been a fantastic relationship ever since then.

Glenn: “Yeah, absolutely, I was in a really tough situation where I’d been Australian Superbike Champion and then just missed out on the championship, but in my eyes I probably should have won it, but that’s how racing is in, in 2009 I just missed out and then 2010 somehow I managed to find myself without a ride, I don’t know why, the powers that be just made a decision and I’m sure if they look back on it now they probably regret it, but I was lucky enough to from a relationship with Wayne Hepburn to start with and as the years went on Nathan Webb came on board and he’s been a big help, and Shane Kinderis, basically he does all the hands-on work and it’s a lot of effort to try and organize one superbike and at some points we’ve had three riders on the team so they’re putting a huge effort in and it’s a little family atmosphere and we seem to be able to get the best out of whatever the situation is, we always seem to get the best out of it and yeah, it’s been great to win two championships for them.”

RRR: A couple of other guys that are usually in that team weren’t able to be there on the weekend, I think Wayne was one of them, it would have been pretty special for you to give him a call after the final race and say that you’d won that Championship.

Glenn: “Yeah, Wayne and Nathan were on the GS Safari, they rode GS 1200s for the BMW GS Safari from Darwin all the way to Cairns and they were out of range, so we haven’t been able to talk to them yet, so I think they finish up today and they’ll be back in range and we’ll be able to have a chat. Obviously they put in all the infrastructure in place and then the hands-on stuff that happens over weekend, there’s already personnel set up for that, so yeah we just went to the track and did our job. But it wasn’t easy on the weekend, had some stiff competition, like you said, Jed Metcher, he’s riding really well and Linden Magee had a really good weekend for him and he was my teammate last year and I’m happy that he’s got up to speed, because he tries hard and so does Jed Metcher, he’s had a few injuries this year and he’s putting in his own money to make it happen and hats off to those guys for putting in such an effort and even though I didn’t win the race, that last race, I feel like I should have won the race, I’m still happy to see Jed win a race and the whole crew that he had there worked their butts off and I’m happy that they can get a win and it keeps everybody involved in wanting to go racing.”

RRR: Speaking of going racing, you’ll be doing that again this coming weekend with the fourth round of the ASC at Winton Motor Raceway, you’ve already mentioned it’s a very front end circuit. You’ve probably got some bits of the track that will really suit the BMW whereas other sections of the track might suit some of your competitors a little bit more.

Glenn: “Yeah, we’ve had some problems with our bike, it probably should be faster and mid-corner than what it is right now and we’re working on that. Whether or not we’ve done enough we’re going to find out at Winton for sure because that’s the track that I feel is going to be the hardest one for us to come away with a victory, and if we can manage that, then I think we’ve done a really good job, because you know it’s a very bottom end, power orientated track where you need good ground off the corners and I feel like even though the Yamaha lacks top end compared to our BMW, it’s very good off the turns and the Yamaha boys ride the bike to its strength and they get off the corners really well, so I think they are going to be very strong and, as we’ve seen throughout the whole year with the Honda winning every round, the Honda guys are going to be very strong and there’s four of them to choose from, so you could pick any winner from me or three Yamaha’s or four Honda’s, so it could be anyone’s race and it’s really just going to come down to who plays it smart and hopefully the weather holds off and we’ll have some good racing.”

RRR: Can’t wait to get down there and witness all you guys in action. Glenn, congratulations on winning that third Australian Championship, very well deserved I might add and can’t wait to see you in action at Winton.

Glenn: “Absolutely, I’ll see you down there.”

Action gets underway at Winton Raceway today for the fourth round of the Swann Australasian FX Superbike Championship. 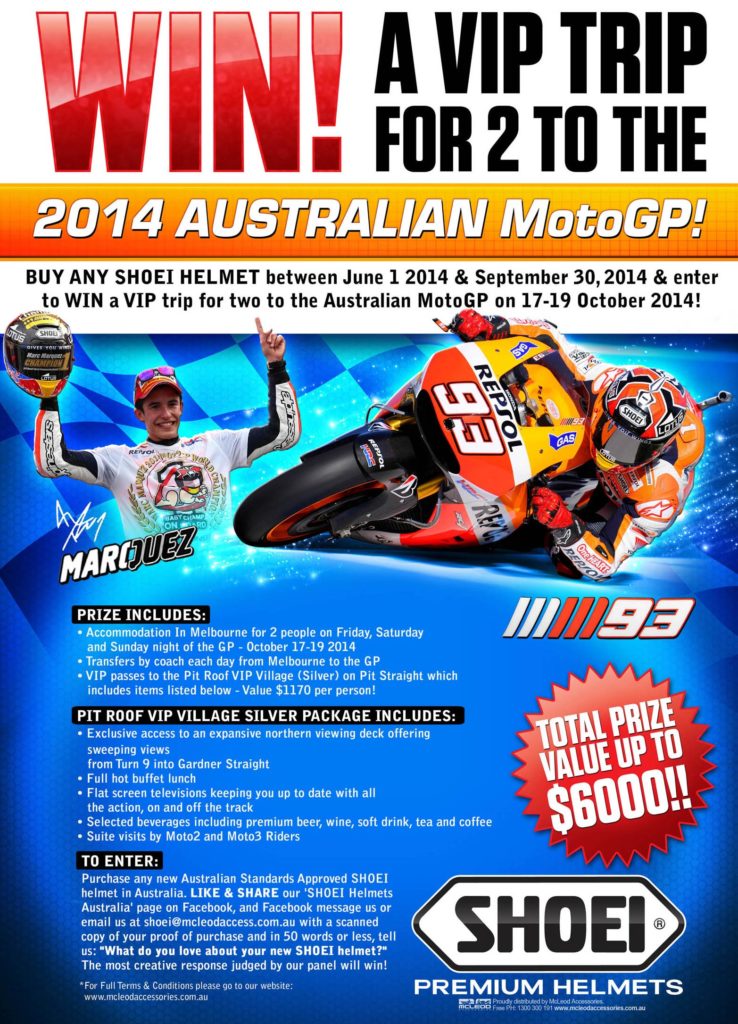