by Trev
in Motorcycle News, Motorcycle Racing, Uncategorized
A A
Share on FacebookShare on TwitterShare

Michael Dunlop joined Steve Hislop and Phillip McCallen on 11 wins at the Isle of Man TT Races fuelled by Monster Energy when he took Friday afternoon’s PokerStars Senior TT race, the second year in succession when he’s won 4 races in a week.

The BMW Motorrad rider was down in seventh at Glen Helen, the first timing point,  on the opening lap but steadily moved through the leaders on the opening lap.  He eventually took the win by exactly 14 seconds from Honda Racing’s Conor Cummins with the Tyco Suzuki of Guy Martin in third.

With conditions all around the Mountain Course remaining perfect throughout the 6-lap race, the second Tyco Suzuki ridden by William Dunlop held the lead in the early stages, ahead by 1.3 seconds at Glen Helen with Cummins and Martin in second and third from Dean Harrison, John McGuinness and James Hillier.

William still led at Ramsey but Michael was beginning to make his move, closing the gap to just one second and by the end of the lap Michael was in front. His lap of 130.628mph gave him a 0.8s lead over Martin with Cummins, William Dunlop and Harrison in hot pursuit, just 3s covering the top five.

On the second lap, Dunlop and the BMW really began to make their mark on the race and with a new lap record, for the Senior race, of 131.668mph, he went 7.7s clear as he came into the pits for his first stop. William had edged out Martin for second as Cummins slipped back to fourth. Harrison remained in fifth as a slow starting Bruce Anstey moved up to sixth.

Lap three saw some major changes though and while Michael remained in the lead, Cummins and Martin moved up to second and third respectively as William Dunlop crashed at the Les Graham Memorial, the 28-year reported to have received a suspected broken leg and was taken by airmed to Nobles Hospital. Harrison was also out, retiring at Sulby.

The gap between Michael Dunlop and Conor Cummins went up to 13s at Ramsey on the fourth lap, but by the pits and the second stop, it was down to 9.5s as Cummins was the quickest on the fourth lap at 130.499mph. Martin was 10s further back in third, with Dunlop having caught him on the road, as Anstey, Hillier and McGuinness now slotted into fourth to sixth.

At Glen Helen on the penultimate lap, just 7s separated Dunlop and Cummins with the former circulating on the road with Hillier, McGuinness and Martin also encountering heavy traffic. However, the Ballymoney rider fought his way to the front of the quartet and once there he was able to build a slightly more comfortable lead.

By the end of the race, the margin was 14s as he swept to his 11th win of his relatively short TT career, with Cummins again justifying Honda’s faith in him in 2nd, 9.6s ahead of Martin who had to settle for third and his 15th TT podium.

Just like twelve months ago Anstey and Hillier battled all the way to the chequered flag, this time for fourth, and it was again the Kiwi who prevailed, this time by 1.4s. Meanwhile, McGuinness, sixth at the end of the opening lap, duly completed the race in the same position to end a difficult week with a solid finish.

Josh Brookes put behind the disappointment of Wednesday’s Supersport race, when he was knocked off by Lee Johnston at Creg ny Baa on the final lap, to finish in a strong seventh with Dan Kneen, Michael Rutter and David Johnson rounding out the top ten after clawing his way back through the field after the tyre change, his first set causing him problems early on.

There was another sensational performance from newcomer Peter Hickman who not only took 11th place but also set the fastest ever lap by a first timer at the Mountain Course with a stunning lap of 129.104mph.

He was the first privateer home ahead of Ian Mackman (15th) but Ivan Lintin’s 16th place was enough to see him wrap up the TT Privateer’s Championship with 97 points overall.

John Ingram and Philip Crowe were reported off at Governors and Gooseneck respectively but both were reported as OK.  Martin Jessop, also off at Governors, was taken by ambulance to Nobles hospital with a suspected broken collar bone, while Austrian Horst Saiger was conscious after an incident at Gardeners Lane and taken to Nobles with a leg injury.

With beautiful sunny weather bathing the island, Harrison grabbed the early lead at Glen Helen on the opening lap, his advantage over Hillier just half a second as Cowton slotted into third ahead of Jamie Hamilton, Olie Linsdell and Keith Amor. There was disappointment though for Ivan Lintin, the fastest qualifier, as he only got as far as Union Mills before retiring.

As the lap progressed, the gap between the front two was increasing all the time and with a first lap speed of 117.897mph, Harrison already had a comprehensive lead of almost ten seconds. Hillier had extended his gap to Cowton too, the margin now 8.4s, as Amor, Hamilton and Linsdell continued to hold onto their top six places but another pre-race favourite Lee Johnston was another early retiree.

The majority of riders opted to pit at the end of the first lap but one man who didn’t was double Manx GP winner Michael Russell and the leaderboard took on a different look through Glen Helen on lap two. Harrison still led Hillier by ten seconds but Russell was now up to third, just two seconds behind Hillier but only half a second clear of Cowton.

It was clear that it wouldn’t be until Glen Helen on lap three that the leaderboard would settle down again after all the pit stops had been made but at the end of the lap the order was Harrison, Hillier, Cowton, Amor, Hamilton and Russell. Russell then pitted but his race was over shortly after when he pulled in at Quarterbridge.

By Glen Helen on the third and final lap, Harrison’s lead had now risen to 18 seconds although Cowton was only four seconds adrift of the 2013 race winner. Amor, Hamilton and Linsdell remained in fourth, fifth and sixth as Harrison, Amor and Hamilton circulated in close formation.

The Bradford rider was able to control the race in the closing stages and he took the win by 14.6s to emulate the feat of his dad Conrad in Saturday’s opening F2 Sidecar race, the first time a father and son have taken wins in the same week.

Hillier was secure in second and took his third podium in the class in as many years, with 2012 Newcomers Manx GP winner Cowton having a superb ride into third. Amor, Hamilton and Linsdell had no dramas on the final lap and filled out the top six.

2012 race winner Ryan Farquhar took seventh ahead of Dan Cooper, Michal Dokoupil and newcomer Martin Jessopp who had a great ride into tenth. Fellow debutante Danny Webb was only two further places back in twelfth. 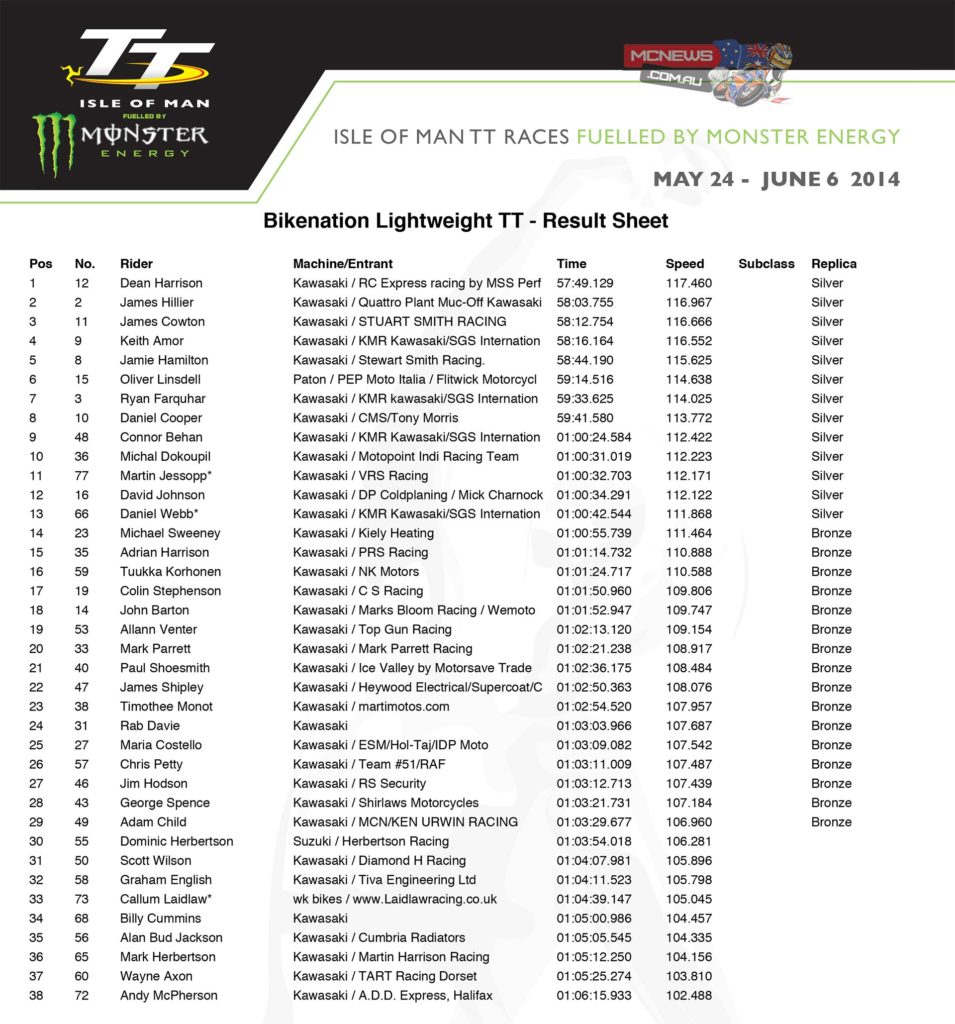 Ivan Lintin’s 2014 Isle of Man TT Races ended in superb style on Friday with the Lincolnshire rider being crowned a deserved TT Privateer’s Champion. Riding the Taylor Lindsey Racing Honda’s, the Bardney-based rider finished all five races inside the top five and with two maximums, he took the title with 97 points, 19 clear of nearest rival Russ Mountford.

Friday’s 6-lap Senior race, the final event of the week, saw Ivan clinch the title as he came home the third privateer to finish and in 16th place overall. Riding the 1000cc Taylor Lindsey Superstock Honda once more, a stunning opening lap of 125.627mph, easily his best ever lap around the Mountain Course, elevated him into 16th place. More laps in excess of 124mph allowed him to maintain his position and he duly took his fifth top twenty finish of the week.

Earlier in the week, Ivan had one of his best ever TT rides when he lay in a stunning fifth place in the early stages of Wednesday’s second Supersport race with numerous‘factory’ riders behind him. An opening lap of 124.339 on the Taylor Linsdey Racing Honda, another personal best in the class, placed him in sixth place only two seconds behind works Yamaha rider Josh Brookes and ahead of Suzuki and Kawasaki riders Guy Martin and James Hillier. Another 124mph+ lap maintained his sixth place at half race distance and although he slipped back slightly on the final lap, he still finished in seventh place, and the first privateer home, for another silver replica.

There was heartache for Ivan though in Friday morning’s Lightweight race, particularly as he’d topped the practice leaderboard on the McKinstry Racing Kawasaki, the only rider to lap in excess of 117mph. Starting at number one, hopes were naturally high of a podium finish at least but it was all over before it had really begun as he was forced to retire on the approach to Union Mills, less than three miles into the race.

As well as ending race week as the TT Privateer’s Champion, Ivan won three silver and two bronze replicas and increased his best ever lap speeds in the 600cc and 1000cc categories to 124.339mph and 125.627mph respectively.