Australia’s Alex Cudlin (QMMF Kawasaki ZX-10R) has claimed a fourth straight Qatari Superbike Championship victory after taking out race one of the final round of the series at the Losail Circuit in Doha, Qatar, on 7 June.

The Taree resident went into the final round holding a 26 point lead in the series over BMW’s Nasser Al Malki, who had closed up in the standings after Cudlin retired in the second race of the penultimate round with an electrical problem.

For Cudlin, his aim for the final round was clear: get to the front early and pull a large enough gap to win race one and the championship. After qualifying on pole position he did just that, taking the lead early and streaking away to yet another race victory, giving him an unassailable lead in the championship with a race to spare.

It was good fortune Cudlin won that first race, because the Aussie was forced to retire with a broken chain three laps from the end of race two while leading. It was a dramatic finish to the season and his second mechanical retirement in as many rounds. As such, it was Al Naimi who took out the closing race of the 2014 season, with Cudlin’s QMMF teammate Prinz taking second from Al Sulaiti in third.

Alex Cudlin: “I’m absolutely wrapped to have won my fourth straight Qatari championship. When I started with this team and championship back in 2010/11 I didn’t think I’d win four in a row, so it’s a great feeling. It was a strange end to the season with the mechanical dramas – despite all the race wins it just proves nothing is ever a done deal in motorsport. It was a shame Al Malki’s BMW had problems and we couldn’t fight until the last race. He has been a standout this year, getting faster and faster every race.

I’d like to thank my QMMF team, my personal sponsors and the Qatari Federation for giving me the opportunity race here. Qatar has almost become a home away from home lately and I’m very grateful for the support.

I haven’t decided on my future as yet but I hope to be back here with the number one plate again in 2015 to go for five championships in a row.”

Cudlin will now turn his attention to the remainder of the Superstock World Endurance Cup, the next round of which is the 8 Hours of Oschersleben in Germany on 23 August.

2014 Qatari Superbike Championship, after round seven of seven. 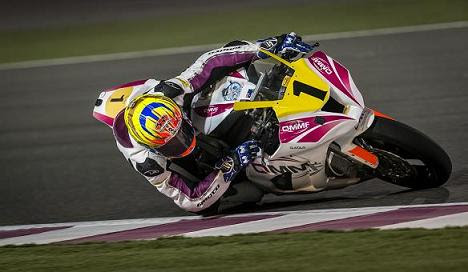