by Trev
in Motorcycle News, Motorcycle Racing, Real Road / TT
A A
Share on FacebookShare on TwitterShare

History was made in the opening race of the 2016 Isle of Man TT races, fuelled by Monster Energy, as Michael Dunlop shattered the lap and race records to record the first ever sub-17 minute lap of the Mountain Course to win the RST Superbike race.

The 27-year old’s first two laps were both under 17 minutes, the quickest being 133.393mph to win by 19s from Ian Hutchinson, who was also inside the outright lap record, with John McGuinness claiming third. His race winning time was a staggering 1m15.643s inside the old race record. 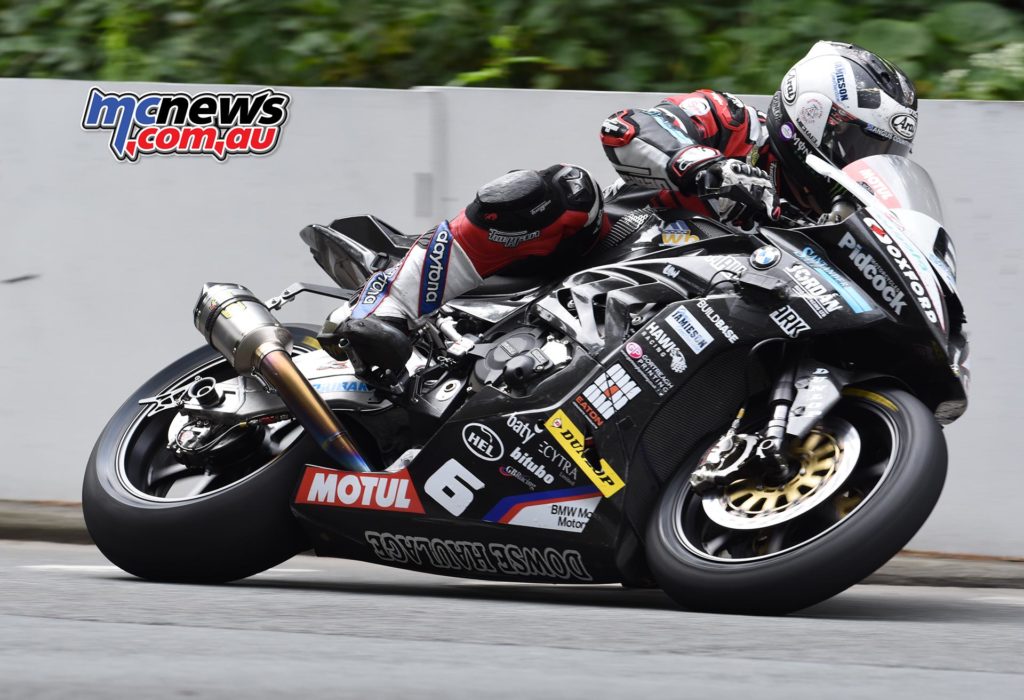 Dunlop signalled his intentions from the off, taking the lead at Glen Helen on the opening lap from Hutchinson by two seconds with James Hillier a further two seconds back in third. Michael Rutter, Dean Harrison and Conor Cummins completed the top six but the latter was soon out, retiring at Ballaugh.

By Ramsey, Dunlop had doubled his advantage over Hutchinson with Hillier still in third from Harrison and Rutter as McGuinness moved up into the top six.

Dunlop was on lap record pace from a standing start though and with a sensational lap of 133.369mph, he recorded the first ever sub-17 minute lap which gave him a 3.6s lead over Hutchinson whose lap of 132.892mph was also inside the old outright lap record. Harrison had taken over third from Hillier with McGuinness and Rutter now the top six, the quartet having all lapped at more than 130mph..

Hutchinson caught McGuinness on the road and his second lap was almost identical to his first at 132.884mph but Dunlop went quicker still and his second lap of 133.393mph extended his lead to 7.5s. Harrison was still in third but McGuinness was on the move and was up to fourth, only a quarter of a second adrift. Hillier had dropped back to fifth as Peter Hickman moved up to sixth.

Dunlop made over four seconds on Hutchinson in the pits and the lead was now 15s at Glen Helen with the Ulsterman having the Bingley rider in his sights on the road. Harrison was still secure in fourth with Hickman and Rutter now the top six as Hillier ran into trouble and dropped back to 13th.

By the end of the fourth lap, Hutchinson, McGuinness and Dunlop were all circulating on the road together with the Honda man getting back ahead of Hutchinson for a brief period. Also going great guns was David Johnson, the Norton man moving up to seventh after a lap of 129.473mph.

As the race entered its final third, the top three were secure in their positions but the battle for fourth was going down to the wire and by the end of lap five Hickman had moved ahead of Harrison albeit by 0.355s. Bruce Anstey had moved up into the top ten on the RCV213S, lapping at more than 130mph for the first time on the machine, as Hillier clawed his way back up to 11th.

At the head of the field though, Dunlop, Hutchinson and McGuinness were comfortable in the podium positions and although the latter lapped at 131.538mph on his fourth lap he was unable to make an impression on the front two so Dunlop swept to his 12th TT victory with Hutchinson having to settle for second and McGuinness third.

Further back, Hickman was charging and after lapping in excess of 131mph on his fourth lap, he posted his best lap on the sixth and final lap with a speed of 132.465mph to take his best ever TT position in fourth with Harrison and Rutter completing the top six.

David Johnson’s excellent ride on the Norton ended with a brilliant seventh place and a new best lap by the Norton at 130.872mph with Anstey – 12th on lap one – Gary Johnson and Lee Johnston completing the top ten.

In the race for the TT Privateer’s Championship, Daniel Hegarty took the maximum 25 points after finishing 13th overall, also posting a new personal best lap of the Mountain Course at 128.341mph.

John Holden and Andy Winkle claimed their second win at the Isle of Man TT, fuelled by Monster Energy, five years after their first win, when they benefited from the final lap retirement of Ben and Birchall. The Lancastrian pair took a dramatic victory by almost a minute from Peter Founds/Jevan Walmsley with brother Alan Founds, partnered by Aki Aalto, in third.

The Birchalls had a 34s lead when they stopped at Sulby Crossroads on their final lap although they did have the consolation of a new outright lap record of 116.798mph.

With 17-time Sidecar TT winner Dave Molyneux and passenger Dan Sayle non-starters after a problematical qualifying week, the Birchalls were first to leave the line shortly after 4pm, after the race was originally red flagged following an incident at Rhencullen, and they led at Glen Helen first time around, 1.3s clear of Holden/Winkle. Reeves/Farrance were only a tenth further back in third with Ian and Carl Bell in fourth from Peter Founds/Jevan Walmsley and Karl Bennett/Lee Cain.

By Ramsey, the Birchalls had added a further second to their lead but Reeves/Farrance had dropped seven seconds to Holden/Winkle and seemed to be without the pace to challenge the front two. Indeed, they slipped back to fourth behind the Bells at the Bungalow. Another team in trouble were Bennett/Cain who retired at Sulby Crossroads.

An opening lap of 115.543mph gave the Birchalls a significant advantage of 8.1s over Holden/Winkle and Reeves/Farrance who had reclaimed third from the Bells although it was tight with just half a second separating them. Founds/Walmsley were still in fifth with brother Alan moving up to sixth.

The first seven crews were all over 110mph but at the front of the field the Birchalls were pressing home their advantage and by Glen Helen on lap two, their lead had increased slightly to 9.2s. The Bells were now back into third and, although they were 17s behind Holden, the Bedlington based pair had edged away from Reeves/Farrance, with the difference now 4.3s.

A second lap of 116.798mph – a new lap record – saw the gap between the Birchalls and Holden/Winkle grow to 24s but the Bells were out of luck having stopped at Barregarrow Crossroads to make adjustments. That promoted Reeves/Farrance back up to third as Founds/Walmsley closed to within 0.7s, Founds/Aalto and Matt Dix/Shaun Parker now occupying the remaining top six places.With first and second places now seemingly secure, all eyes turned to the battle for third and, sure enough, Founds/Walmsley had moved into the final podium spot at Glen Helen albeit by just half a second from Matt Dix/Shaun Parker.

However, there was drama on the final lap and after passing through Ballaugh with a 34s lead, the Birchalls retired soon after at Sulby Crossroads promoting Holden/Winkle back into the lead. Soon after, Reeves/Farrance were also out having stopped at Glen Duff.

It all meant Holden/Winkle came home for their second TT win – their first since 2011 – with the Founds brothers, Peter and Alan, claiming their maiden podiums with Jevan Walmsley and Aki Aalto in their respective chairs.

In a race of high attrition, Steve and Matty Ramsden secured their best ever position in fourth as Dix/Parker and Wayne Lockey/Mark Sayers completed the top six, all three crews setting their best ever laps. For the Ramsdens, a final lap of 111.387mph was their first above 110mph.

There were also impressive perfromances from newcomers Mick Alton/Chrissy Clancy and Lewis Blackstock/Patrick Rosney, the duo finishing in 13th and 14th place. Alton set the best lap by a newcomer driver with a speed of 108.008mph.

CU Events Ltd announced that Australian sidecar driver Dwight Beare, 27, originally from Melbourne, Australia who was a resident of Onchan in the Isle of Man was killed following an accident near Rhencullen during today’s Sidecar Race 1 at the Isle of Man TT Races. The race was immediately red flagged.

Dwight’s passenger Ben Binns from the Isle of Man was airlifted to Nobles Hospital where he was described as being stable with a fractured ankle.