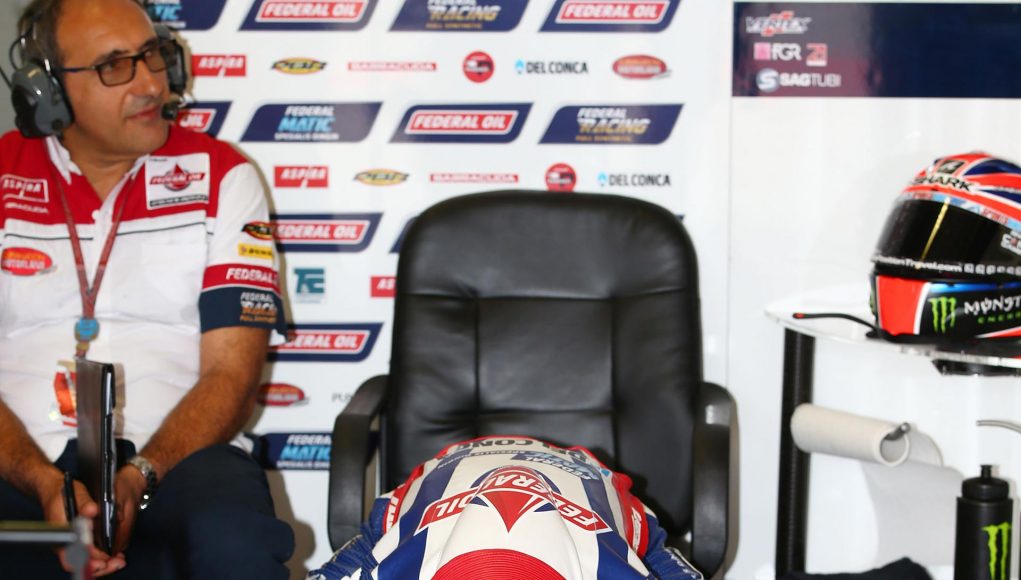 History can be an easy thing to remake when the cards fall right. In 2016, MotoGP has now rewritten it – but it’s been nothing but easy for those who have penned their own chapters in the season that has now seen the most different winners in a single year since the dawn of the world championship in 1949. Chapter eight was written at Misano World Circuit Marco Simoncelli and it was Repsol Honda rider Dani Pedrosa holding the pen.

Pedrosa took his 29th premier class win and 103rd podium at the Italian track as he fought back up from a tough qualifying position on the third row, and in doing so kept his fantastic record of a race win in every year of his MotoGP career in tact. After a tough season and then a corner turned at the post-race test in Brno, the ‘Baby Samurai’ returned to the top step in spectacular style, taking first teammate Marc Marquez, then the Movistar Yamahas of Jorge Lorenzo and Valentino Rossi as he charged for the flag and crossed the line with a healthy margin – unstoppable and uncatchable in his race rhythm.

“It was a great race, and it has been a long time since I’ve had these feelings. Even I was surprised by the performance I put in today because I hadn’t expected to go so fast; we were fantastic. The key was the pace; I was able to fight my way through, especially in the final part, and being consistent allowed me to catch the riders at the front. It’s very nice for me to take a victory again, after all the effort made by those who have been with me in this challenging season so far: my family, my team and my fans. It has been very difficult, so I’m very happy for all of them. Today I enjoyed myself, although I was a little worried about the choice of front tyre because I hadn’t used it in hot conditions. In the end we were focused and everything went very well; it was an opportunity we had to take advantage of, and I think we achieved a great victory.”

Lorenzo got the jump from pole, leading the field into Turn 1 as the Mallorcan so often does, with front row starters Rossi and Maverick Viñales (Team Suzuki Ecstar) going head-to-head for P2 and the Italian coming out on top. Pedrosa got an incredible start from P8 to move him up into the front group, joining Viñales, Andrea Dovizioso (Ducati Team) and Marc Marquez (Repsol Honda Team) in the squabble for P3.

Rossi soon struck back to sit up teammate Lorenzo at the final corner and push the reigning champion wide, taking the lead and leaving Lorenzo and Marquez to chase him down – with Pedrosa the fastest man on track and setting a new lap record. Making a move against his teammate look easy and getting down into the 1:32s, Pedrosa was on the charge.

Setting his sights on Lorenzo and slicing through, the number 26 fixed his crosshairs on the race leader in Rossi’s backyard before passing the Italian with an aggressive move to sit him up and concentrating on making a gap at the front.

Untouchable and back with a bang, the incredible ride through from P8 was completed as Pedrosa shook off a helpless Rossi to cross the line with a healthy margin, as history continues to be made with the eighth different winner in 2016.

Marquez suffered a tough race to head over the line in P4, but retains a healthy 43 point lead in the title as the paddock head back to Spanish soil. Viñales completed the top five, beating home rider Dovizioso and temporary teammate Michele Pirro (Ducati Team) to the honour. Cal Crutchlow (LCR Honda) had a solid ride to cross the line P8 ahead of Monster Yamaha Tech 3 rider Pol Espargaro, and it was a fantastic showing from Alvaro Bautista in Aprilia Racing Team Gresini’s home race as the Spaniard completed the top ten.

After qualifying for the race Jack Miller did not start. Miller was forced to withdraw from the San Marino GP on race morning. Throughout practice and qualifying the physically demanding nature of the Misano circuit caused him a lot of problems with the right hand he injured in a warm up crash at the Austrian Grand Prix. The Australian informed the team this morning that he was not fit to ride. The team respected his decision and will now monitor closely his recovery. Only once the full extent of the injury is known, as well as the expected recovery time, will a decision be made as to when Miller will return to action.

“Misano is a much more physically demanding track to ride than Silverstone and my right hand has been getting worse each day. Every time I got off the bike the swelling was more. It’s not painful, but I was lacking power in the hand and you need to have that here for the hard braking areas. I thought long and hard about it last night, but it simply wasn’t safe for me to ride a 28-lap race with this problem. Now I am focussed only on recovery and getting back on the bike as soon as I am fully fit again.”

MotorLand Aragon now awaits: no longer enemy territory for Pedrosa, Marquez or Lorenzo as the flyways approach – and the season finale in Valencia gets ever closer.