Katoomba in the Blue Mountains, 80km west of the NSW capital, played host destination to the 2017 launch of the new range of adventure bikes from Austrian manufacturer, KTM. The line-up for this launch includes the new 1090 Adventure R, and its bigger Super Adventure siblings, the 1290 R and 1290 S variants.

Most manufacturers are putting some serious work into this segment as overall sales across all segments are soft in the first quarter of 2017.

I am really interested to see what KTM has come up with to stay at the pointy end in the adventure stakes, and after just recently coming off a two-day adventure in the Victorian highlands aboard the new BMW R 1200 GS Rallye X, it will be interesting to note the differences between the German and Austrian built motorcycles.

Since the inception of KTM’s adventure range, they have manufactured over 75,000 adventure branded motorcycles. Reliability is taken seriously, with the KTM development team subjecting their engines to a grueling program. The engines are subjected to more than 100,000km of endurance testing before their reliability is deemed satisfactory.

For 2017, there have been some significant changes to both the 1290 Super Adventures and the 1090 Adventure, with the bigger sister now sporting a distinctive new LED head light.

Now I will be honest, when I first arrived at the launch and saw all the 1290s lined up next to each other, my immediate thought was, ‘What the hell is that light!’ But as time passed and I got to understand the whole process and features, I finished with an appreciation and attraction to this prominent new trademark feature.

I would like to say they handed me the keys to the 1290 Super Adventure S, but that would be a small lie as it doesn’t actually have a key! The ignition is activated by a transponder that needs to be in close proximity to the bike. Essentially like keyless entry for cars.

No more putting your helmet and gloves on to realise you still have the key in your pocket after refueling. A new button on the right control unit acts as an On/Off button. Once activated you just press the start button to fire the big twin into life. The fuel cap is also keyless and will remained unlocked and ready to open for 60 seconds after the ignition has been turned off at the fuel bowser.

This new system had mixed feelings among the other riders on our journey, but I thought it was a great new feature. The only thing that took a little getting used to was when switching the ignition on, as you need to wait for three or four seconds for the TFT display and ECU to become active, before hitting the start button. If you try to speed this process up, the bike doesn’t respond until it’s ready.

The new dash layout with its 6.5” TFT display is absolutely stunning and is one of the most impressive features on the motorcycle. Once the ignition is activated this 6.5” display bursts into action. It is clear and easy to read and is very easily customised to what you would like to have displayed.

It is finished with an anti-glare surface and is light reactive, meaning that is adjusts to ambient light. As we were out on the bikes all day and didn’t arrive back till after sunset I got to sample the display in both bright daylight and darker night conditions, and it was a treat in both.

Out on the road and after the mundane ride down the hill from Katoomba towards Lithgow on the Great Western Highway, where we are barely able to get over 70km/h for what seemed like an eternity, we turn off and head towards the Jenolan Caves.

Finally, we can give the big girl the fuel it has been so desperately waiting for. The engine is amazing and is based on the 1290 Super Duke R’s 1301cc V-twin donk and, with some refinements, topping out at a whopping 160hp with 140Nm of torque.

The figure that you notice on the road is the 108Nm of torque available at a mere 2500rpm. What does that mean? Wheelies and plenty of them! This bike accelerates through the gear box with ease and with the aid of the power shift, gear changes are smooth and seamless.

The hydraulically operated power-assisted slipper clutch combined with the up/down quick shifter makes back shifting without the clutch a breeze. On closed throttle a quick depress on the gear lever activates a spike in engine rpm allowing the gearbox to easily find its lower option.

Even if the compression is a bit high, the slipper clutch takes over and controls the chatter to allow for smooth gear shifting. I found the gearbox in general a little heavier and not quite as smooth as the box in the Rallye X.

Ergonomics can be adjusted to suit a variety of different sized riders and I did play with the easily adjustable windshield on the 1290 S. After a couple of attempts, I found I could adjust it with the new self-locking winder while riding. Foot pegs can also be adjusted further forward and down by 10mm, although I found them fine in their standard position.

It was three-degrees Celsius when we left Katoomba, and the mercury didn’t rise above double digits for more than an hour after we stopped for lunch. I don’t think my hands have ever been that cold and I was slightly surprised that KTM don’t offer heated grips as a standard feature. They are available along with a host of other goodies as a genuine power part however.

As the road twists and turns in front of me I decide to have a play with the suspension. The Super Adventure S is suspended by WP forks and shock, and this derivative has the semi-active option with four modes. All able to be controlled quickly and on the fly from the control unit on the left handlebar.

Comfort, Street, Sport and Off Road modes quite quickly change the suspension’s characteristics from soft and compliant through to firm enough to head off road. The suspension control unit then matches the damping requirements in real time to the surface conditions.

The rear spring pre-load has four different settings as well, to accommodate solo, solo with luggage, two-up and two-up with luggage. The TFT display also allows you to see which mode both suspension and pre-load are set to at all times. I opted for solo street mode for the majority of the ride that I did on the 1290 S.

The suspension works fine and it corners well, feeling firm enough under heavy braking and with the options available I’m sure most riders will find a setting that suits their needs. The 1290 S also has a WP hydraulic steering damper as standard. The S model is designed to spend most its life on the black stuff, but as we found, it handles the open dirt roads with ease as well.

Dry weight is a claimed 216kg and this motorcycle for its size doesn’t feel overly big or hefty to ride. It is comfortable just meandering along at 100km/h, but quickly comes to life at the twist of the throttle. The electronics package has been designed with Bosch and features some quite cool features.

With traction control, you get the pretty standard four mode options with Rain, Street, Sport and Off Road.  It is also now lean sensitive, which is next level and found on a lot of sports bikes. It works in changing power output depending on the lean angle.

Most of my time in the saddle is spent in Sport mode or with traction control and ABS disengaged completely. Sport mode allows the bike to drift without too much intervention and it works great. I still prefer to disengage TC when I am wanting to have a bit of a go, as I still like to know that I have total control.

I must add that although the bikes we tested had the power shifter, this is not standard feature on the 1290 Adventure S or R models, but is available as part of what KTM have labelled a travel pack. The travel pack also includes Hill Hold Control. When stopped on an incline,Hill Hold Control the bike holds the brake on to help stop you rolling backwards. The travel pack also has the KTM My Ride which allows you to Bluetooth your phone through the TFT display to control incoming calls and audio player. You can receive calls or change tracks by the left control unit.

There is even a storage compartment for your phone with a USB plug, so you can charge your phone while riding. That’s thinking, although I’m not sure you would get any of the modern big screen phones in there.

I was really looking forward to the return sector of the journey from Sofala back to Katoomba as we where swapping over to the R going version of the 1090 and the 1290. This for me was going to give me a real idea of a direct comparison between the GS and the Super Adventurer R, as I spent the majority of the ride on the BMW R 1200 GS off road on cool single and fire trails.

But circumstances where not favouring us, with the late arrival into Sofala of the dirt group and the fact that we needed to get back to Bathurst to re-fuel. This meant that the only time I got to experience the R on the dirt was to take a quick photo opportunity at the back of Lithgow power station. I was a little disappointed, and hence my review is just on the 1290 Super Adventure S.

Here at MCNews we will do our best to snaffle both the 1090 Adventure R and 1290 Super Adventure R, for a shake down on the dirt roads around my home town of Tamworth. Stay tuned. 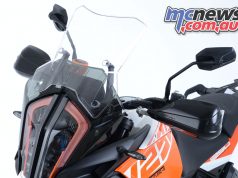 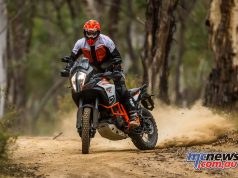 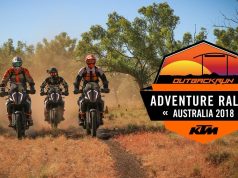