Boris gives us his take on the Mamba resurgence

The Factory Ducati garage must be one of the world’s weirdest places at the moment.

Here’s Dovizioso, the new Great Italian Hope after miraculously reinventing himself as a competitive rider in 2017, is once again crashing his brains out in 2018 – Catalunya, Le Mans, and Jerez, have all conspired to force-feed Dovi face-fulls of gravel and shame.

He’s now back in eighth place just behind his team-mate, Lorenzo. They have the same amount of points, but Jorge has won more races.

And that is also a big part of the weirdness that doubtlessly permeates the Ducati team.

We’re seven races into a 19-race season. And Lorenzo, who was had been flubbing helplessly around pretty much every race-track since he signed up with Ducati last year, is now strutting around like he is once again King Of The World.

He has won two races on the trot. And not just won them. He has dominated, leading both virtually from start to finish and reeling off those metronomic OCD laps like he is back riding his old Yamaha.

What’s changed? Well, according to the noises coming out of Ducati, it was all down to reconfiguring the petrol tank and giving the Mallorcan somewhere to rest his mighty arms during a race.

Of course, it may well have been just that. Sometimes the most banal things make the most difference.

The Ducati team has spared no effort to make its 20-million-Euro purchase happy. Lorenzo’s seat has been reconfigured dozens of times. His bikes’ ECUs have been mapped, re-mapped, un-mapped and de-mapped, then discarded and replaced with different ECUs. Winglets have been tweaked, pared down, lessened, increased, removed and replaced. Tyres have been tested, and every permutation of rake and trail, from 21-inch-over-chopper to unicycle have been tried. Nothing worked, and then suddenly everything worked.

So I’m thinking it’s maybe more than just a comfier tank for his arms.

Lorenzo approached Honda (probably quite early in the season) and Honda snapped him up for 2019 and 2020, making the announcement immediately after the Mugello round – a race which Lorenzo won so very convincingly.

He then just as convincingly backed it up at Catalunya.

And like I said, he was not just winning, but winning in a way that left his opponents in disbelief. Even Marquez, who still leads the championship and will be Lorenzo’s new team-mate (is anyone else wondering how soon that’s all going to go to shit?), cannot keep up with him.

So you can only imagine how weird the vibe in the Ducati garage is at the moment.

Here’s the racer y’all paid megadollars for and he’s been demonstrably crap. His team-mate, who was only ever considered a competent journeyman racer who is getting paid an eighth of what Lorenzo was signed for, suddenly starts dicing with and beating the freak Marquez. And then, just when both Ducati and Lorenzo have decided to go their separate ways, Lorenzo starts winning races.

I would pay good money to sit in on the management meetings of the last few weeks.

So yes, Lorenzo won at Catalunya. Iannone, who has never stopped fancying himself as a player, did poke his Suzuki up the front during the first lap, but was rapidly swallowed up by Marquez, who was in turn swallowed up by Lorenzo – who then proceeded to reel off 1.40s every lap bar the last one. That was a 1.41 because he was waving and showboating to the crowd. It was an astonishing display on his part.

Oddly enough, the post-race plastic hammer-wielding and Lorenzo Land flag-planting, seemed very suddenly out of place for me.

I felt like punching him in the head a little bit, especially when he started bonking his team with the hammer in Parc Ferme after the race.

As one of my friends commented after the race: “He is a strange little man, who when properly moved, rides like a god, but remains strange.”

Behind Lorenzo, it was processional. Most of the racing was for fourth, fifth, and sixth, and featured Crutchlow, of course. Iannone, who had a crack on Lap One, faded quickly back to race with Cal and with Zarco, who is still obviously suffering an ocean of shame after Waterlooing out in his home race and now seems unable to get his Napoleon on once again.

Vinales is also not nearly as wonderful as he believed himself to be some time ago. His starts are solidly the other side of terrible, and while he manages to qualify well, he cannot get his Yamaha off the line with anything resembling meaning. But he does seem to come a bit good towards the end of the race.

Dani Pedrosa, who looks like he might be racing a satellite Yamaha next year if the rumours are true, acquitted himself as he usually does in what is obviously the twilight of his career. He terrified Crutchlow, kept Vinales at bay, and finished in fifth.

Up the front, Marquez rode a mature and measured race. Lorenzo is no threat to the championship at this stage, so Marquez was perhaps not as motivated as might have been to push a little harder to try and catch him.

And they are going to be team-mates next year.

Marquez had already added another major notch to his Freakshow Belt during FP4. Coming hot and hard into the third-gear Turn 14, his front-end slid out…and kept sliding out as he somehow held the whole impending leant-over catastrophe on his right knee, before levering it up and carrying on. I have never seen anything like it in more than 30 years of watching MotoGP and I cannot believe even now that I saw it last weekend. He is some next-level special.

But will he win the championship? Maybe. But maybe not. The old yellow war-horse is second on the table and not all that far away at the moment. Rossi scored another podium at Catalunya, his third in a row, and lies a mere 27 points shy of the lead. That is not a lot with so many races to go.

As a fan, I want him to win his tenth – probably more than even he does. And while nothing is impossible in MotoGP, such an outcome is unlikely. Maybe. Shut up.

Of course, the rest of the paddock is bunched up behind The Doctor with serious intent. Vinales is on 77, Zarco on 73, Petrucci on 71, Crutchlow on 69 (once again and seemingly forever in sixth place somewhere), and right behind him are Lorenzo, Dovizioso and Iannone who all have 66 points.

There really is nothing in it at all.

Catalunya did its bit to help create this wonderful points-table bunching. Twenty-six riders started the race. Only 14 finished. Even Morbidelli, who fell off, remounted and came last, scored points.

The only thing of note here is that Scott Redding and Karel Abraham did not fall off. But the attrition rate was pretty high.

Cheese and tulips await the circus at the Cathedral of Speed in Assen next. And Assen is another one of those tracks where astonishing and unexpected things happen.

But then, that seems to be precisely how this season is unfolding anyway. 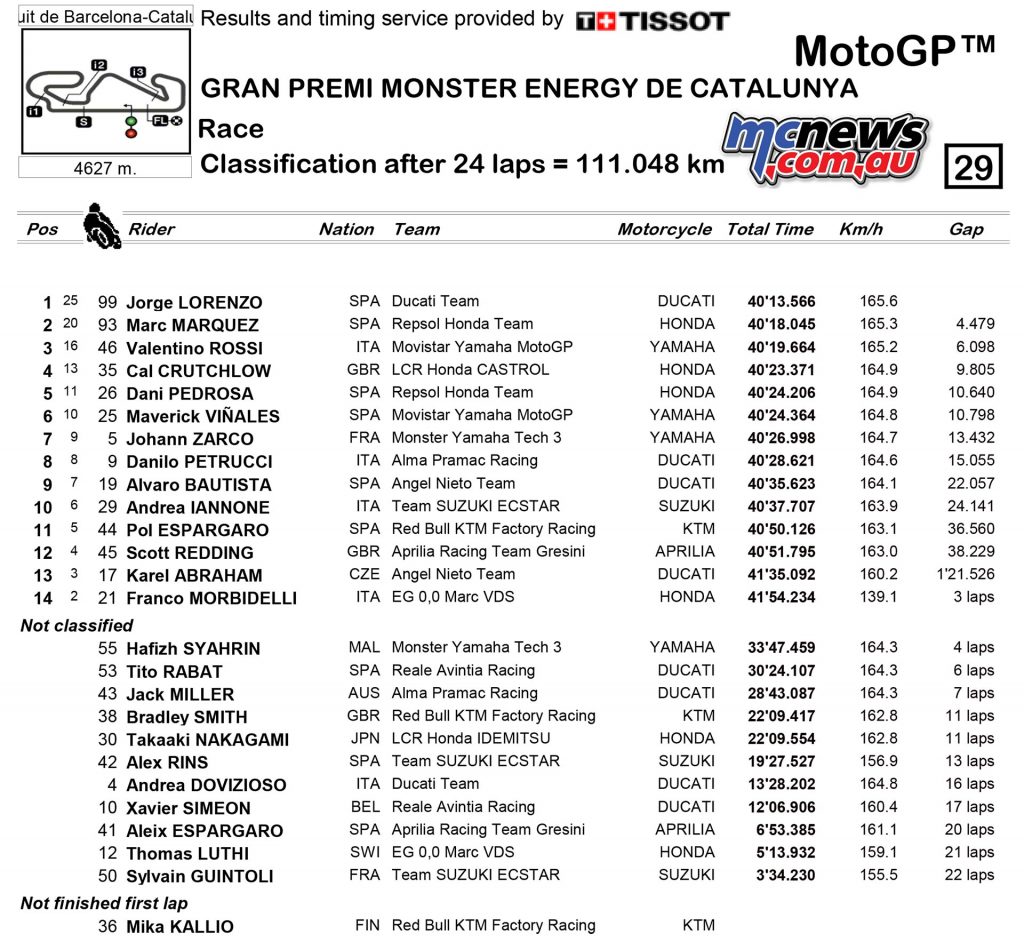 Marquez extended his Championship lead to 27-points, but Rossi remains his closest challenger – and the ‘Doctor’ has often been the master of the TT Circuit Assen.

Despite a lack-lustre start to the season Maverick Vinales has still been racking up points and lies third in the standings ahead of Zarco and leading Ducati contender Danilo Petrucci.