The 35-minute ASBK Timed Practice session here at Phillip Island this morning was a fairly busy affair as riders and their teams searched for extra milliseconds of speed ahead of tomorrow’s two 12-lap races.

Mike Jones changed a shock and some engine braking settings on the DesmoSport Ducati during the session as they honed the 1299 Panigale Final Edition. His best of 1m32.735s came halfway through the session but the Queenslander had also done a 1m32.745s on only his second flying lap, and a 1m32.896s on his 15th and final lap of the session.

In contrast Wayne Maxwell and Ecstar Suzuki are obviously confident of their set-up as the #47 Suzuki only really turned in three flying laps. Also, of course, a tyre conservation strategy as Maxwell saves a front tyre for the Q2 session.

Those three laps by Maxwell though certainly sent a well loaded shot across the bows of the competition though. A 1m32.981s on his first, then a session topping 1m32.727s on his second, followed by a 1m33.149s on his third before he returned to the pits.

Troy Herfoss put in nine-laps over the course of the 35-minute Timed Practice session to end that session third quickest.

Cessnock Kawasaki privateer Matt Walters was next quickest, 1m33.289s his fastest lap on a domestic Superbike around Phillip Island. The 26-year-old has recently shed 6kg and is now really starting to enjoy the latest model ZX-10R more than ever, remarking that he had not felt as comfortable on a Superbike since his long lost love that was his 2011 model.

Bryan Staring was fifth this morning ahead of Josh Waters, Daniel Falzon, Mark Chiodo and Glenn Allerton while Cru Halliday rounded out the top ten ahead of Damon Rees. Many of those riders only put in a few laps as once confident that their automatic promotion through to Q2 was achieved they chose to rest on their laurels and save their tyres.

The new look Saturday format for 2019 sees Superbike competitors out for that aforementioned 35-minute ‘Timed Practice’ session. The times from that session then decided the ten riders that automatically qualified for the Q2 session. The riders from 10th back in the Timed Practice session then had to fight it out in a Q1 session, with the top three in that session then promoted into Q2, making for a final 12-rider tussle over the first four rows of the grid. A little like we see in MotoGP these days.

Cru Halliday predictably topped that Q1 session early on but on track action was stopped only a minutes into the session when a few Cape Barren Geese decided to wander on to the track, just after Siberia. It gets awfully messy if you meet one of these seven-kilogram geese at speed, let alone very dangerous.

Riders were back on track after a short delay but Aaron Morris was quickly out of the action after going down at turn eight.

Jamie Stauffer moved up to second momentarily before being pushed back to third by Damon Rees. Cru Halliday improved his time to strengthen his hold on P1 with a 1m34.176s.

Alex Phillis put in a determined charge to try and break into that top three but couldn’t quite manage it, thus it was Halilday, Rees and Stauffer that went through to the Q2 session.

Mike Jones dropped in a 1m32.634s on his first flying lap to clearly signal his intentions and then immediately returned to the pits.

Wayne Maxwell put in a 1m32.889s before returning to the pits and halfway through the 15-minute session the top five were all in the pits while the order was Jones, Maxwell, Waters, Walters and Staring. Herfoss then promoted himself up to third in the order with six-minutes remaining, a 1m33.108s the time but he then went quicker again on his next lap to push up into P2 on a 1m32.860s. With four-minutes remaining all the other top runners were exiting pit-lane and lining up for their final time attack.

Daniel Falzon and Mark Chiodo the first to improve but then Matt Walters gazumped them all with a 1m32.545s scorcher! What a lap from the Matt and dad team that is the Cessnock Kawsaki squad!

Mike Jones then dropped in a 1m31.995s to go P1, only a tenth away from the outright race lap record he set here earlier in the season on a ZX-10R.

He was then marginally quicker again through all the splits on the next laps bar the last one, he lost a little time through the last sector and failed to improve further.

Wayne Maxwell then went P2 with a 1m32.321s to push Walters back to P3 as the chequered flag came out and that was it. 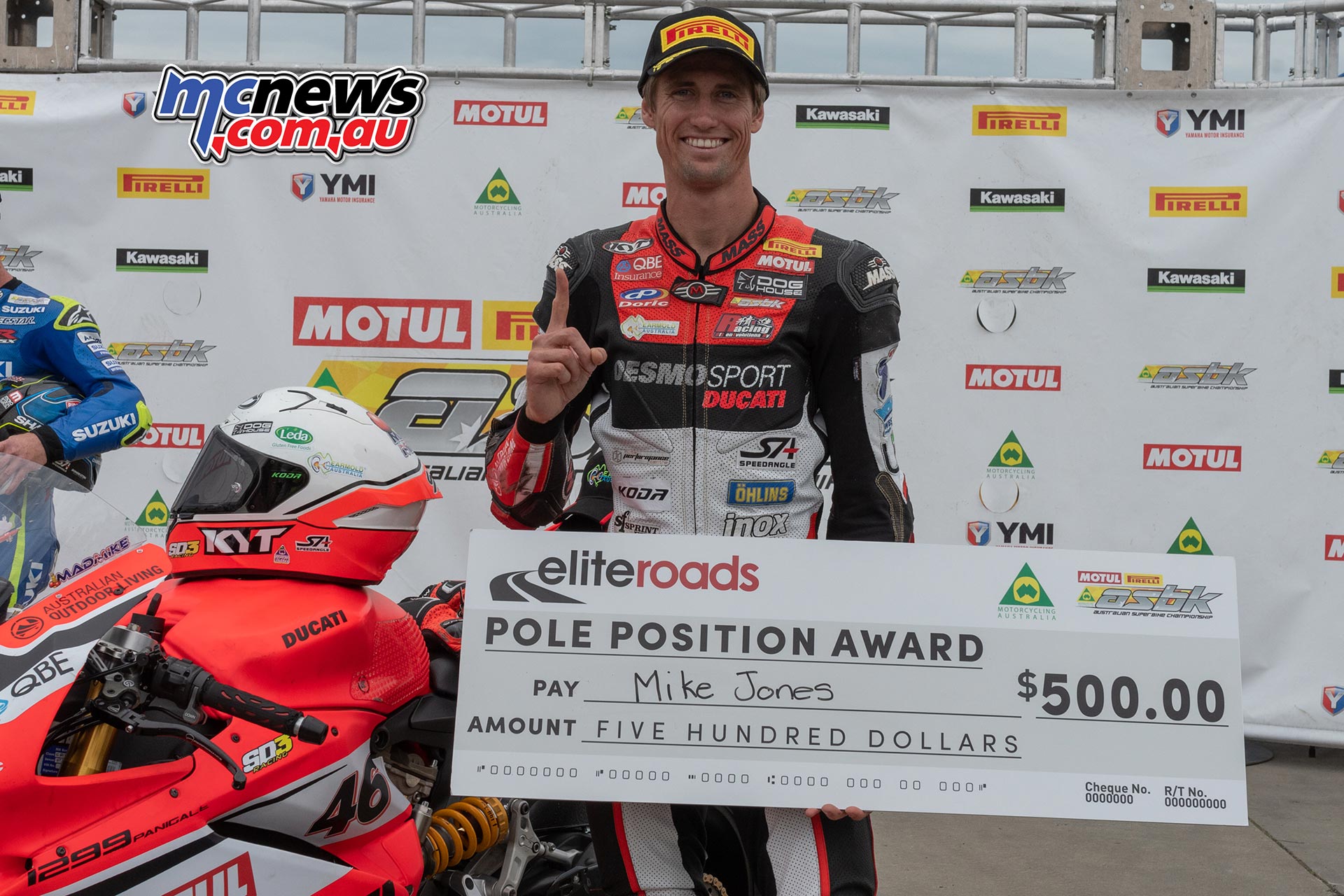 With pole position Mike Jones extends his championship lead by another crucial point and will line up alongside Wayne Maxwell and Matt Walters on the front row.

Troy Bayliss had taken part in Friday Practice to gain more set-up time on the V4R Ducati but is not racing this weekend.