Ferrari does the MotoE double at Misano | Hook P10/P12

The third round of the inaugural MotoE World Championship marked the first double-header round for the new battery powered racers.

Italian Matteo Ferrari became MotoE’s first two-time winner after the 22-year-old took the victory in both Saturday and Sunday’s seven-lap bouts at Misano.

Australia’s Josh Hook finished tenth on Saturday and did not manage to improve on that score on Sunday, when the 26-year-old took a 12th place finish.

On Saturday home hero Matteo Ferrari (Trentino Gresini MotoE) claimed a magnificent maiden MotoE World Cup victory after a hugely dramatic Race 1 with the Italian holding off Hector Garzo (Tech 3 E-Racing) and Xavier Simeon (Avintia Esponsorama Racing) on the final lap to take the Cup standings lead. The three crossed the line covered by just over half-a-second after another top showdown, but there was big drama too.

“It’s been an incredible win in front of my home crowd and with two really good rivals like De Angelis and Simeon. They were both very fast and setting up corners in a very good way, so overtaking wasn’t easy. At the right time I completed the passes, improved my rhythm and kept the lead. I would really like to thank my team because the bike was perfect: a set-up change we did yesterday put us in perfect conditions despite a really hot track. It’s true, we’re first in the championship, but I’m only thinking about tomorrow’s race and obviously we’ll try to go for the same result.”

Polesitter Alex de Angelis (Octo Pramac MotoE) got the holeshot from pole as Ferrari and Simeon slotted in behind the race leader on the opening lap, but the field remained a long freight train of riders early on. After crashing in E-Pole, then-Cup leader Mike Di Meglio (EG 0,0 Marc VDS) made a good start from the back of the grid to get up to P14 initially, but the first drama hit not long after as his bike ran into issues on Lap 1, giving the standings an automatic shake up as he retired not long after.

The next drama wasn’t far behind as at Turn 6 on Lap 2, Niki Tuuli (Ajo MotoE) attacked up the inside of Mattia Casadei (Ongetta SIC58 Squadra Corse) but with the door closing, both went down in a domino crash, with Casadei then collecting the luckless Bradley Smith (One Energy Racing) too. Round one winner Tuuli was later found to have broken his femur in the incident which of course side-lined him for Sunday’s race.

Smith was able to get going again, albeit at the back of the pack, and with so many leading contenders either out or looking like scoring little points it meant the fight was on at the front to not only claim victory, but to stake a claim in the overall standings. As the dust settled it was De Angelis still leading the way from Simeon and Ferrari, with Garzo then getting passed by Eric Granado (Avintia Esponsorama Racing) in a stunning move. Soon after, however, before the Brazilian then crashed at Turn 14 and brought his comeback from P16 on the grid to a halt.

What more could happen? Well, something was about to. De Angelis had slipped to P3 and with four laps to go, the Sammarinese rider suddenly highsided out of contention on the exit of Turn 5 – rider ok.

“It’s a shame. After a great start, the race pace in the first two laps was excellent. The battle with the podium group was “intense”. Then unfortunately I lost the rear and crashed. We’ll try again tomorrow.”

De Angelis’ demise left a three-way fight at the front between Ferrari – who was now race leader – Simeon and Garzo. Nothing split the trio in the latter stages and heading onto the last lap, just 0.3 covered them.

Ferrari, though, was faultless. As Simeon looked for a way through the Belgian was instead attacked by Garzo at Turn 11 and the Spaniard took over in second, but time was running out for the Tech 3 rider to try and make an assault on the win. In the end, Ferrari was able to stay just far enough out of reach, crossing the line just ahead for his first win in the Cup and, after all the drama, the points lead to boot.

Garzo kept second and took his first podium and some valuable points after his early end to the race in Austria, with Simeon taking his second successive podium in third.

“I’m really happy, it’s my first podium! We have been trying all season so far and finally we managed to achieve it. Yesterday has been really difficult for me, my team was working nearly all night to fix the bike and they did a great job, so huge thanks to them! We know since yesterday, that we have the pace to fight for the podium and finally we did it. I hope to continue like this for the rest of the year.”

Jesko Raffin (Dynavolt Intact GP) was fourth not too far further back to pick up his best MotoE result yet, with LCR E-Team’s Niccolo Canepa battling Raffin to the flag – ultimately losing out but also claiming his best finish of the season.

Sete Gibernau (Join Contract Pons 40) took P9 at a track where, despite his huge experience on two wheels, he had no prior running, with Josh Hook (Octo Pramac MotoE) completing the top ten.

“We worked a lot on the set up to get a good feeling and in the end we managed to improve. The start today was not good but I’m sure we can have a better race tomorrow.”

Bradley Smith eventually fought back to P12, taking a few valuable points. After all the drama on Saturday it was Ferrari who took the series lead on 47-points, ahead of Simeon on 45.

“It was an unlucky day. The opening laps weren’t the best. I didn’t feel completely comfortable with the bike. The accident was unfortunate. We all went strong into Turn 8 and an incident between two other riders sent me down. Luckily for me, I was able to finish and get some points. It’s the best of a bad situation, but we have to take away the good things. Tomorrow we have another opportunity. This is obviously not the way I wanted to finish the race. It was not my fault, but these things can happen, especially when you start from far back. Now I’m 7 points behind the series leader, and we’re focusing on the second race.”

There’s no place like home to do the double and after claiming victory in Race 1, home rider Matteo Ferrari (Trentino Gresini MotoE) did it again on Sunday morning at the Gran Premio Octo di San Marino e della Riviera di Rimini, getting to the front and able to pull out a lead that proved unassailable.

Tech 3 E-Racing’s Hector Garzo took second once again, coming out on top in a multiple-rider tussle on the final lap, with Mattia Casadei (Ongetta SIC58 Squadra Corse) snatching the final place on the podium at the final corner.

Ferrari was right in contention from the off, however, glued to the back of De Angelis as Maria Herrera (OpenBank Angel Nieto Team) made some serious headway on the opening lap to grab P3. Ferrari then took the lead at Turn 2 on Lap 2, with the top six locked together and separated by just 1.3. Soon after though, Lap 3 saw de Angelis have a big moment coming up the hill on the exit of Turn 7, creating breathing space for Ferrari. And he made the absolute most of it, edging away and leaving the rest of the field to fight it out for second.

De Angelis was the first one out of podium contention as his race then ended with a crash – a fast one at Turn 13, but rider ok. That left Garzo, Casadei, Niccolo Canepa (LCR E-Team) and Herrera all in that scrap, with Smith, Eric Granado (Avinita Esponsorama Racing) and Jesko Raffin (Dynavolt Intact GP) just off the back of that group in a battle for sixth.

It all came down to the last lap – and the last sector. Garzo was a little wide at the fast Turn 11 as the riders headed around it for the final time, back into the clutches of those on the chase, with Canepa trying to make a move stick on Garzo for second at Turn 14. The latter held the outside line and, subsequently, had the inside for Turn 15. But then, Casadei pounced for third. The Italian ducked underneath compatriot Canepa at the final corner.

Up the road, Ferrari took win number two of the weekend, with Garzo just holding on to second and Casadei securing the remaining place on the rostrum. Canepa missed out by just 0.055, with Maria Herrera only a tenth in further arrears as she completed the top five and took her best result in the Cup so far. 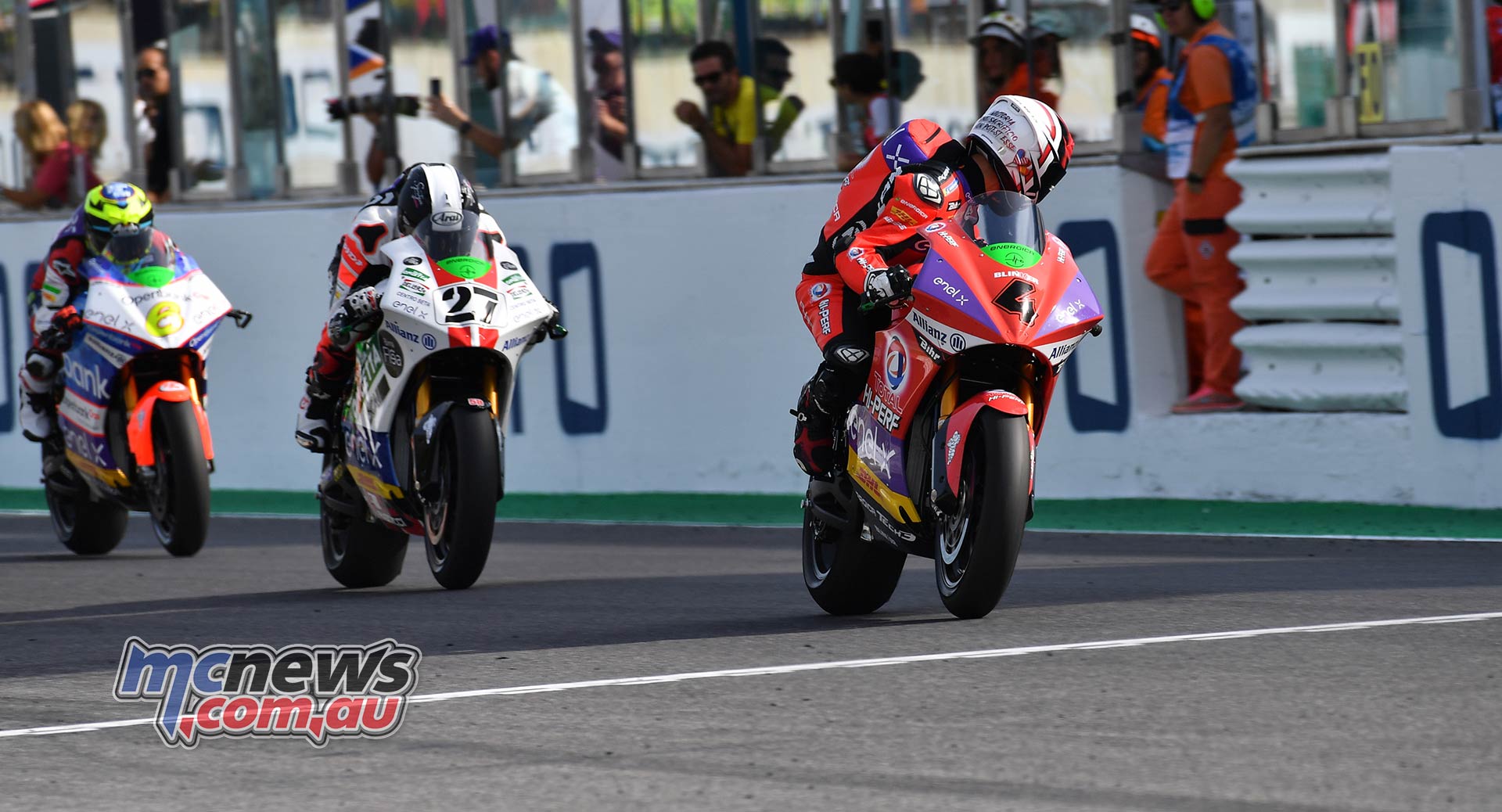 In the battle for sixth, Granado prevailed. Raffin also got the better of title hopeful Smith as the British rider picked up P8, with Nico Terol (OpenBank Angel Nieto Team) claiming his second top ten of the weekend in P9. Former former title leader Di Meglio closed out the top ten from the back of the grid, having crashed in E-Pole.

The FIM Enel MotoE World Cup took another twist at Misano, with Ferrari now taking a healthy 19-point lead in the standings to Valencia and Garzo the man just behind him. Just two races remain, and next it’s Garzo’s home turf…make sure to tune in for the season finale from the 15th to 17th November.

“It was a completely different race compared to yesterday and with the team we decided to go for a much more aggressive start to try and dictate the pace from the beginning. We managed to do so and things went the way we wanted. We’re very happy and maybe we weren’t expecting to do so well, but we were still a bit sure of it. It was also a little bit about luck, because after the start I was almost caught into Simeon’s crash, who fell off really close to me. Things went well, so now we try to confirm the same type of result at Valencia in November.”

Josh Hook crossed the line in 12th place and now has 20 points on his tally, ranking him 16th in the series thus far.