Fire on the mountain

by Boris Mihailovic
in MotoGP, Motorcycle News
A A
Share on FacebookShare on TwitterShare

If I was a cruel and evil cuss, I’d be lobbying to have every round of every MotoGP at the Red Bull Ring. It is fast, it is savage, and it certainly answers Russell Crowe’s eternal question: “Are you not entertained!?”

Hell yes, I am entertained.

Where else on this planet would I behold an elderly Spanish millionaire rocking a pair of lederhosen, those amazing German leather sex-shorts, like a Sound of Music extra? Love your work, Carmelo.

Where else could I see men literally defying death at speeds I cannot comprehend, on bikes I will never ride, with skills I could never match?

On what Earth would I have seen a man leap from a bike traveling at 230km/h, which then hit an air-fence and burst into flame, and walk casually back to his garage as if it was nothing of any moment? You try jumping off a bike at 20km/h and see how that goes for you.

We all returned to the same track, but with a different name for the round, seven days after Vinales and Rossi missed being slaughtered by centimetres. We were all still raw emotion. But to not watch this round was unthinkable.

Surely it would not be as astonishing as the previous round? Surely the Race Gods would pause to draw a breath?

Nah. They doubled down.

The concerned Austrians had managed to extend the air-fence on that fateful corner, and added some catch-fencing above it in case Morbidelli and Zarco, or someone else, felt like throwing their race-bikes at the sun.

Boris on the GP of The Americas | Brains or balls…?

The riders examined it, and deemed it a pretty good effort in the time the Austrians had to actually “do something”. I’m tipping there might be a redesign of that whole section next year.

Anyway, the weekend opened with the news that Zarco would be starting his race from pit-lane. This was his penalty for “Irresponsible riding” in the incident with Morbidelli at the previous round.

Oliveira was still full of hate for Aleix Espergaro, and the pair were looking daggers at each other during practice. There were also daggers being cast towards the recently created Stewards Panel and its seemingly unequal calls.
Aleix took time out from hating Oliveira to comment.

None of this was of any concern to Marquez, who looks like he’ll be sitting out most of the remainder of the season. It seems his injury, and the second operation to repair the plate he allegedly broke opening a window, is proving problematic.

I hope he makes it back before the end of the season, but I have a niggling feeling there’s more to his injury than HRC is letting on. It would be a shame to have such an extra-terrestrial talent end his career in such a way, but crueller things have happened.

As a result of the new Yellow Flag rule, which cancels a rider’s lap-time if a rider in front crashes and the Yellow Flag is displayed, I’m noticing the racers are starting to charge harder earlier in Qualifying and the crucial FP3. Clearly, they’re hoping to avoid losing a lap-time late in the session if someone goes down.

I’m also noticing Takaaki Nakagami has seemingly pulled the Idemitsu fairings off his bike and put them on Marc’s factory Honda. He was blazing in Qualifying, and was sat beside Pol on the grid. Had his last lap not been cancelled because he exceeded track limits, he would have been on pole.

As it was, the top four, Pol, Taka, Mir and Miller, were separated by 900ths of a second. Zarco would have been up there too. His qualifying time was a blistering 1:23.632, but he was waiting to start in pit-lane. 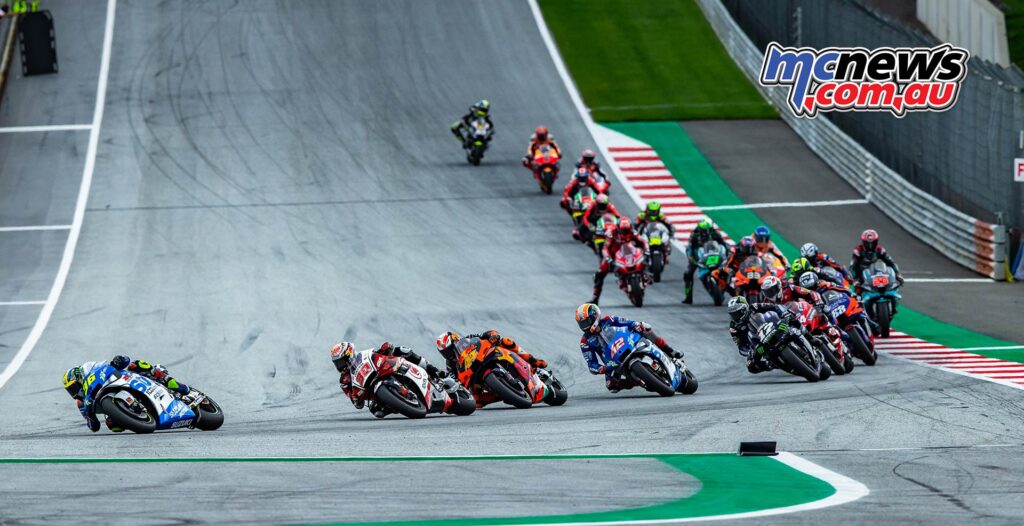 When the 28-lap race began, Mir ran so wide into Turn One it looked like he was leaving to go to town. Somehow he kept his place out front, and the next few corners were hard-core for the front-runners. Pol was originally in second, but Miller had him in Turn Four, and then when Nakagami also passed Pol, I thought his head might explode. It seemed Pol was once again to be cheated out of winning on his KTM.

Mir’s excursion in Turn One led to a penalty forcing him to drop a place, and by the end of Lap One, it was Miller, Mir, and Taka, with Pol close behind.

Even Rossi began to move. The Doctor had started way back in 14th after an aimless Practice and Qualifying, but he was in ninth by the end of the first lap.

Dovi, who had also started the race rather indifferently back in eighth, was moving forward and starting to torment Vinales, who had begun in a hopeful fifth. Binder also wished to play and was soon behind Rossi after a dreary qualifying session which saw him start in 13th.

Fabulous was nowhere to be seen by anyone except Bradl, Smith, and Rabat. He was back in 14th and being chased by Cutchlow who looked to cement his hold on his now traditional 15th place in Austria.

By lap three, Binder was the fastest man on the track, and Rins was starting to worry Pol for fourth place.

Up front, first Miller and then Taka passed Mir, but Mir instantly fought back, and the front three were clearly going to brawl every lap.

Two laps later, Binder passed Rossi and started to hunt down Oliveira for eighth, Mir passed Miller to take the lead, and Zarco, the Marseillaise playing loudly in his head, was now the fastest man on the circuit, having started from pit-lane.

Mir raged on in front, with Miller and Nakagami duking it out behind him.

And right about then, just as Binder passed him for seventh, Vinales started riding backwards again. Ahead of him Dovi was cruising in sixth, unable to match the pace at the front or make any gains on Rins or Pol, who were just ahead of him.

Zarco was now in 19th, with visions of Napoleonic glory in his eyes, and Binder passed Dovi for sixth place, sandwiching the soon-to-be-unemployed Ducati rider between him and Oliveira.

Back in the field, Vinales had obviously entered some new level of Hell. Alex Marquez passed him, and since Alex Marquez only ever passes Smith or Rabat when they faint, there was clearly some technical issue with Maverick’s Yamaha.

Mir was now once second clear of Miller, and with 14 laps to go, Nakagami jammed it past Jack on Turn 10. Miller responded by out-dragging him down the straight, but Nakagami came at him again on the following lap and made it stick.

Binder was now closing in on Rins, which is when Maverick jumped off his bike at 220-odd km/h.

As you can imagine, these blokes don’t often jump off their bikes. The are normally spat off them. But at the end of the main straight, Maverick clearly bailed out. The newly brake-free Yamaha continued on its way, slammed into the air fence at 140km/h, and burst into flame.

The race was red-flagged as Maverick threw his hands up at the skies and walked dejectedly off the track.

Fifteen minutes later, they lined up once again for Race Two – a 12-lap sprint. Their grid positions corresponded to where they were on Lap 16.

So it was Mir on pole, followed by Taka, Jack, Pol, Rins, Binder, Oliveira, Dovi, and a bemused Iker Lucuona who had passed both Rossi and Fabulous before the red flag came out. Zarco was back in 17th, immediately behind his old mate, Morbidelli.

New soft tyres were served all around, except for Mir, who had no new front tyres of any description, so he went back out on his used medium, but stuck a new soft on the back.

What followed was glorious – a 12-lap, balls-out sprint.

Miller led the charging pack, Mir on his rear tyre, followed by Pol, Oliveira and Binder. Zarco was in seventh. Binder then passed Oliveira, briefly grabbed fourth, then ran wide in a corner and let the Portuguese rider back through. This also allowed Dovi to pass the South African.

Three laps in and there was a freight train of five head-down-bum-up killers on the charge. Miller, Mir, Pol, Oliveira, Dovi and Binder – were all in the hunt for the podium.

Pol then passed Mir, who was starting to struggle with his fading front tyre, and then he passed Jack when he ran a bit wide – which Jack has a habit of doing just when he shouldn’t.

With seven laps left, Miller was back in front, Pol and Oliveira on his tail-piece. Pol hammered past Jack on Turn nine, but Jack was not surrendering. And neither was Dovi, who took fourth over from a fading Mir.

But he was not going to catch the three at the front. Pol, Jack and Oliveira had a slight gap on Andrea, and Miller was determined to stand on the top step of the podium.

The last lap was as vicious and glorious as anything MotoGP has ever offered. Jack and Pol engaged in a battle for supremacy. Pol was being driven by the chance at his first ever win for KTM, and Jack by the knowledge he was now and for the foreseeable future the only hope Ducati had for regular podiums. And he wanted Pol’s head to explode again when he beat him.

They brawled like bag-bound demons, exchanging places, as Miguel followed in third, and on the second-last last corner, Jack forced Pol wide, and grabbed the lead, only to lose it metres later. Undaunted, Jack entered the last corner inside Pol, and forced Pol very, very wide and ran wide himself.

And Miguel Oliveira was there. He took his Tech 3 KTM inside both of them and streaked to the finish line – the first Portuguese rider to ever win anything in MotoGP.

The wash-up for KTM is both wonderful and serious.

When the Tech 3 team cut ties with Yamaha and signed with KTM, people laughed. No-one is laughing now.

And now that KTM has won its second race, the concessions it had (more engines, more testing) are gone. It now has to play with the big boys.

I reckon it’s up for it.

I’m just grateful we all have two weeks to recover before Misano.

It is still anyone’s championship. Look at the standings after this race. Tell me that’s not crazy.

Tell me this whole season hasn’t been crazy. Bet you can’t.