Australia, Latvia and France secure their spots at the 2021 Monster Energy FIM Speedway of Nations Final in Manchester

Australian skipper Jason Doyle was delighted with how his team carried the burden of being qualification favourites as they won Monster Energy FIM Speedway of Nations Semi-Final 2 in Daugavpils on Saturday.

The Roos topped the score chart on 35 points to book their place at the Monster Energy SON Final in Manchester on October 16 and 17.

They are joined by Saturday night’s hosts Latvia and Final Qualifier winner France, as both countries prepare for their first-ever appearances in a world team championship final, where they join hosts Great Britain, plus Semi-Final 1 top trio Poland, Sweden and Denmark.

The Aussies went into Semi-Final 2 as red-hot favourites to triumph, which Doyle admits made their Daugavpils mission even tougher.

So he was pleased to take victory, with the 2017 world champion scoring 23 points from a possible 24, while Aussie champion Max Fricke added 12. 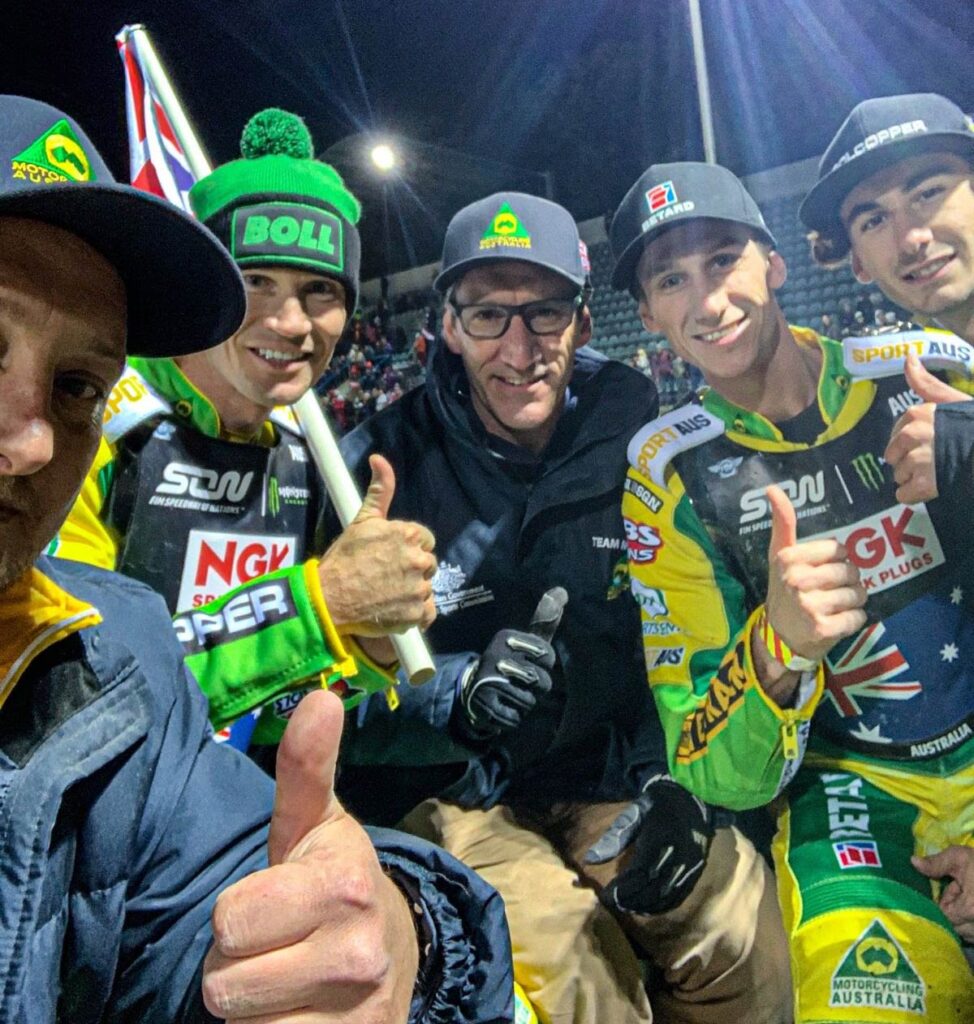 “That win takes a lot of pressure off,” Doyle said. “I hate going into a meeting as the favourite.

“I knew it was going to be tough. We had to work hard in the last couple of heats. Obviously the Latvians are so good around here. It’s their home track.

“We worked our bums off to get to where we were. We knew it wasn’t going to be easy because of the riders that were here.

“We really needed to dig deep in the last couple of heats. Fricke did an amazing job to get us back in there. Getting the win and not having to worry about going through the Final Qualifier is a much easier way to qualify for the heart rate!”

Doyle now heads to Manchester with his Aussie side chasing their first world team title since they won the 2002 FIM Speedway World Cup.

But the Newcastle-born racer knows it will be no easy task in a competition where national pride is always at stake, ensuring riders raise their game to another level.

He said: “We all love riding for our countries. I can speak for every rider here. If you get the opportunity to ride for your country, it means so much.

“We don’t do it for a lot of money; we just do it for the race suit and we are honoured to do it. This showed for every rider. Everyone worked really hard.”

Latvian captain Andzejs Lebedevs is expecting a night of celebration across his home city Daugavpils. His team stormed into their maiden world team final by finishing second on 34 points – ensuring they avoided the dreaded Final Qualifier.

He said: “It’s amazing. We were very nervous about this meeting before because many people came to watch us.

“This is not just my home country. It’s my hometown. This is a small city and everyone knows everyone. My family are here and my friends are here.

“I am very happy to qualify straight through to the Final and make this history we dreamed of before come true. We have made a Final for Latvia and it is an historic Final.

“I have a day free tomorrow, so I think many people will come to the city centre and celebrate this great evening for Team Latvia.”

France skipper David Bellego was elated as he and partner Dimitri Berge held their nerve in the Final Qualifier against third-placed Germany, grabbing a 5-4 heat advantage to advance to Manchester.

They are the first French team to reach a world team final and Bellego insists his side heads to Great Britain next month with no pressure on their shoulders. He said: “I guess it is history for France to go through to the Speedway of Nations Final, so we are really happy.

“It was a hard job tonight, as everybody probably saw, but happy days! We are in the Final.

“We will go there with no pressure. We are happy to make the Final. We have all raced in Manchester before and we know what to expect.”

Before the Monster Energy SON Final takes place, all eyes turn to the FIM Speedway Grand Prix series, which concludes with the epic eWinner Torun SGP of Poland double-header on October 1 and 2.

SGP World Championship leader Artem Laguta and Bartosz Zmarzlik battle it out for the gold medal with just one point separating them ahead of two tense final rounds.

World champion Bartosz Zmarzlik declared it mission accomplished as Poland booked their place earlier at the Monster Energy FIM Speedway of Nations Final in Manchester as Semi-Final 1 winners in Daugavpils on Friday night.

The Poles topped the score chart on 37 points, sealing victory with a 6-3 heat advantage over Finland in race 19 as Zmarzlik stormed to 21 points from a possible 24, while partner Dominik Kubera added 13 and under-21 Jakub Miskowiak chipped in with three.

Despite Danish star Mikkel Michelsen winning an epic heat 21, Swedish pair Fredrik Lindgren and Pontus Aspgren got the better of Leon Madsen to take a 5-4 heat advantage and seal the second automatic qualification place for the Final on 34 points.

This left the Danes on 32 and forced them into the Final Qualifier against the USA, who were fourth on 28. But Madsen and Michelsen held their nerve when it mattered most to book their tickets to Manchester on October 16 and 17.

Top spot belonged to the Poles, though, and while Zmarzlik refuses to get ahead of himself, he’s delighted to be lining up at the National Speedway Stadium as his country seeks its first Monster Energy SON world title.

He said: “I am very happy because the team won and, for us, it’s very good that we achieved our plan. Now we will see you in Manchester.

“I never like to say too much before a meeting. We must go to Manchester and we will see what happens.”

Kubera was handed a spot in the starting line-up at the expense of FIM Speedway Grand Prix star Maciej Janowski. The Lublin racer hopes his efforts in Latvia will be enough to secure his place in the side for the Final.

He said: “I would really like to race and we will see what the coach (Rafal Dobrucki) does. I will try to be the best. I need to change something with the bike and look for something. But we will see.

“We need to work hard, but I felt really good on the team. It was really hard to have a good setup on this track. After many heats, the track was changing. But it was okay. We won and we are in the Final. Now the most important thing will be that meeting in Manchester.”

Lindgren was delighted to lead his side through as he racked up an incredible 23 of his team’s 34 points – dropping just one point over six heats.

The world No.3 is no stranger to the UK, having raced 14 seasons with SGB Premiership club Wolverhampton in two separate spells between 2003 and 2017.

Lindgren has been away for four years and admits there is something he has been missing ahead of his trip to Manchester. He smiled: “I will get a nice English breakfast and be ready for the racing!”

The Swedish skipper added: “We are really pleased to go straight through to the Final with a top-two position. We worked really hard for it. The track was very demanding, so I am very happy we made it happen. Now we will really look forward to Manchester.”

Danish captain Leon Madsen admits he has been struggling with illness in recent weeks, so he was pleased to lead Michelsen home in the Final Qualifier as they beat USA pair Luke Becker and Broc Nicol to take their place at the National Speedway Stadium.

He said: “We did well. We worked very well together. But it was a tough meeting, especially for me because I have been sick for the last few weeks. I still have a lack of energy and power. The last race was really a struggle and I just managed to survive. I was really holding on to the bike.

“But we managed to get through to the Final and I am happy about that. I just have to get back to full health and fitness. I am sure that when I get back fully fit, we will be strong in Manchester.”