Carnage, Confusion and tragedy avoided in Moto3 at COTA

We get the thoughts of Jack Miller, Marc Marquez, Fabio Quartararo and Pecco Bagnaia on the dangers of Moto3

The first attempt at running the Moto3 race at COTA overnight was stopped after Filip Salac went down at Turn 11 which caused a red flag, as the rider needed medical attention. The Czech rider was conscious but had to be stretchered off the circuit.

After a lengthy delay, Moto3 riders again formed up on the grid for what was going to be a reduced seven-lap sprint.  A recipe for disaster if there ever was one, and a disaster is what unfolded.

Guevera had a good lead with four laps to go before a failure of his WP rear shock put the Aspar rider out of the race. The 17-year-old was distraught when he returned to his pit garage and expressed his frustration by booting a few things around in the pit bay.

Guevera’s misfortune handed the race lead to Darryn Binder, who a lap later lost the lead to his Petronas Sprinta team-mate John McPhee.

With three laps to go there was a huge crash on the main straight involving Jeremy Alcoba, Andrea Migno and championship leader Pedro Acosta. Alcoba had clipped the back of Deniz Oncu’s KTM and went down, Alcoba then struck his bike which sent man and machine high into the air, while Acosta went down while trying to take evasive action. 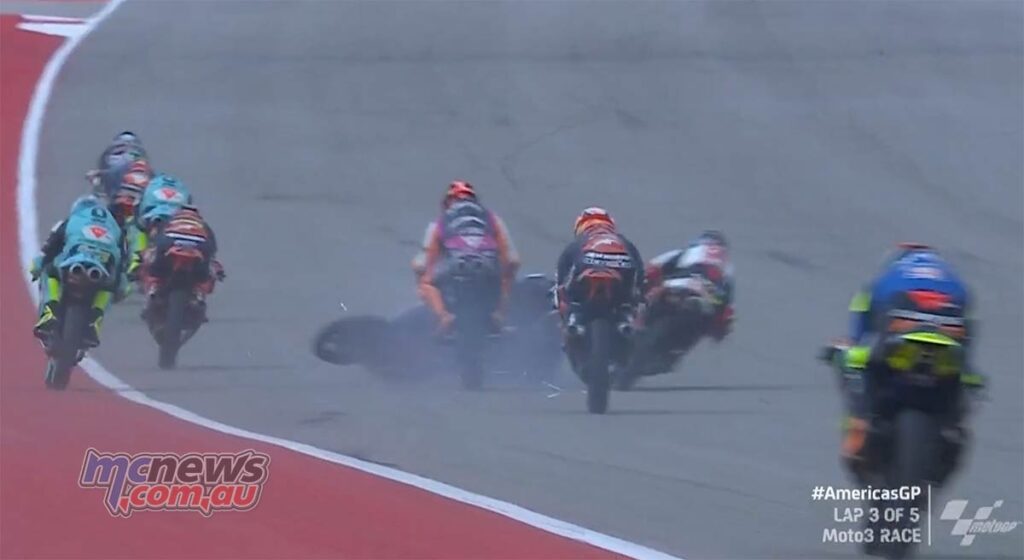 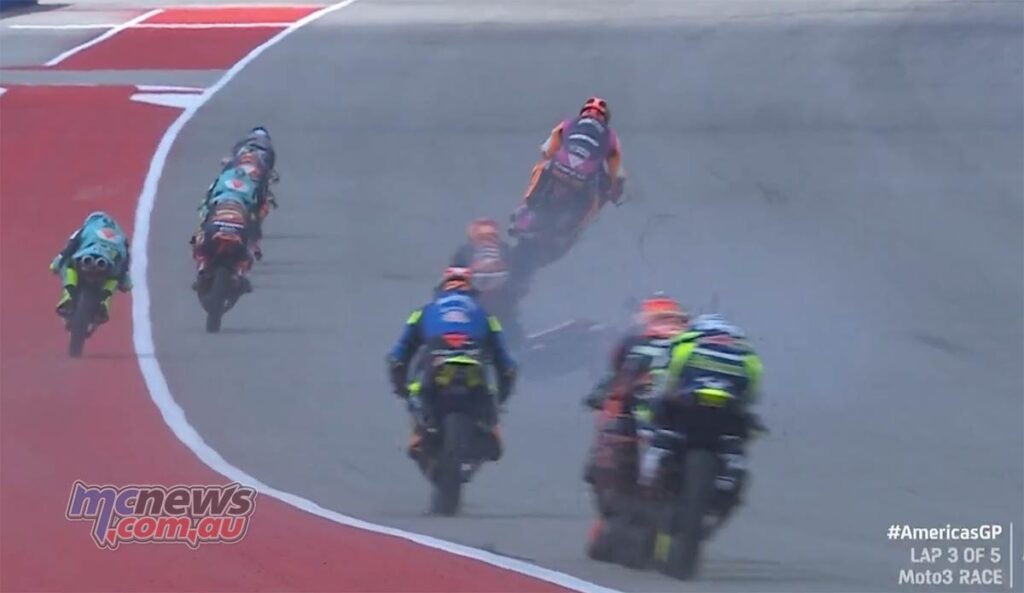 The rest of the field then had to take evasive action to avoid the sliding riders and machines and only had any chance of doing so due to the width of the track at that point of the circuit.

It was a truly sickening incident and an absolute miracle that none of the riders involved were seriously injured. Not one bullet was dodged, but a full clip. They all walked away and the sense of relief up and down pit lane was palpable. It was truly unbelievable that all riders were ok.

Young Turk Deniz Oncu was judged to have caused the incident by swerving on the main straight.

As far as such moves go it was minor, but the events it triggered were explosive. Alcoba was not alongside him and in his field of view, but was on his back wheel, thus it was not an obvious move from Oncu made with malice to obstruct Alcoba, it was just unlucky.

But as we have seen time and time again, in both Moto3 and World Supersport 300, when you have such large fields of riders on machinery that is all virtually identical in performance, on control tyres, it seems that we are always inches from disaster and only luck prevents it.  Sometimes we get unlucky, sometimes we get lucky, today we got lucky.

Prior to the race every rider and team had each been emailed and issues instructions not to swerve down the main straight when in close company with other riders.

Oncu was judged to have specifically contravened those instructions and, subsequent to the race, FIM Stewards issued Oncu with written notice that he would be suspended from the following two rounds of the championship.

I must admit I feel a bit sorry for Oncu in regards to the severity of that penalty. As far as transgressions go, I would say there have been a thousand offences worse than that seen in the championship so far this year. But the officials have drawn a line in the sand, still, if there was no accident resulting from those movements I don’t think Oncu would have scored a penalty, and few eyebrows would even have been raised. They had to be seen to be doing something though, and this certainly puts the riders on notice…

Oncu’s Penalty Notice from the FIM 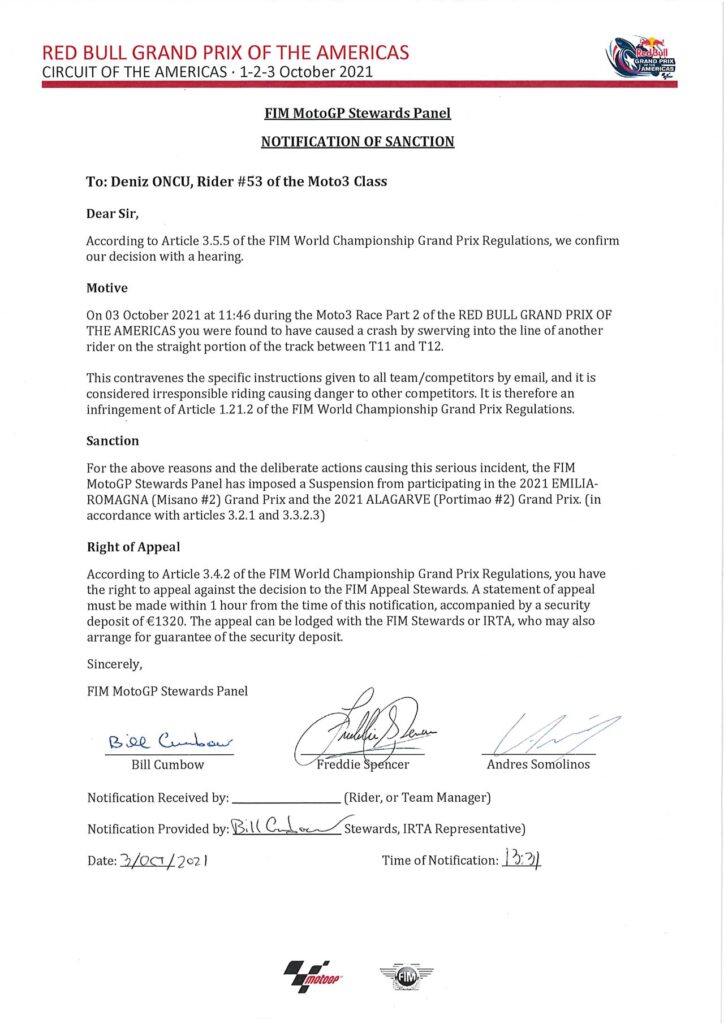 Nobody knew the answer to that question for a long time as there was long ongoing consternation about what would happen in regards to the results.

FIM officials met with team representatives where a somewhat strange decision was made to announce the results of the race from the first leg, before the re-start.  As a result Izan Guevera was deemed the winner from Dennis Foggia and John McPhee. A very strange state of affairs.

Thus it was that same young Spaniard that had been kicking the chairs in his pit bay after retiring with a blown shock, eventually announced as the race winner.  From utter despair, to elation, and the full gamut of emotions in between, Izan Guevera was now a race winner in what was not only his maiden victory, but also his first podium.

“Where do I start? The craziest race of my life. I’m really happy and a result like this has been coming. The race had been going very well for me and the red flag stopped us cold. We started the five-lap sprint but then we broke the rear shock when I was sure we were in a position to win. I didn’t have any words and I still don’t! I’m just really happy that they counted that first race!”

The three unfortunate riders that fell in that huge incident gained a result and important points. Alcoba credited with sixth, Acosta eighth and Migno 10th.

Dennis Foggia gained ground on Acosta in the championship chase though with his 20-points for second place moving him to within 30-points of the series lead. Foggia has been on a roll of late with five podiums in succession.

That was one seriously strange round of the Moto3 World Championship, but it was a round that everyone managed to walk away from, and for that we are thankful.

We also attended the virtual press conferences held after the race to glean some insights into what some of the main men of MotoGP thought about the situation that unfolded in Moto3.

“That was blatant moving on the straight. Shit like that’s been happening all year. Looking back at Barcelona was one race for example where I had my heart in my mouth because of those kind of moves on the straight and today it…..fuck….honestly that was not good. That was really really bad and I’m so happy that all the guys were able to get out you know, especially Acosta and Migno who were innocent bystanders in the whole lot. They were just trying to use the slip-stream like normal human beings and then idiots in front have to go and hit each other and put a bike in the middle of the straight.

“You know, I think the biggest thing is we were lucky it happened here in Texas where the straight, you know where you could land a Boeing 747 on the straight, it’s that wide, so there was plenty of room for other guys to go around but if it had have happened in Jerez or somewhere like that I don’t think the results…..you saw how far the guys were flying and you know, for Pedro to land where he did and then slide down the Armco like he did is fantastic but you know, it could have been much much worse so. They have to think about it but for sure I think that, and the fact they were thinking about starting the race again is stupidity. These guys need to be punished. They need to understand that you can’t do that week in week out because if it continues like that it’s not going to end well.”

“I mean of course today was a scary moment. I mean everybody in my box was silenced because you never know and it’s a difficult situation for the motorcycle world but it’s true that it was the mistake of the movement of one rider that created all these things so I think it’s a very strong penalty of course. Of course, it was not the intention of Oncu but it’s true in end that they must go in that way if they want to stop this movement. You cannot change in the main of the straight the bike or your line too aggressively because then you can create these things so for me, it’s the way to stop, especially in the small categories this kind of movement.”

“Yes, to be honest, the last three accidents we had was in the small categories and I think yeah it’s true that for them the slipstream is really important but there must be something that you can’t change the line on the straight. For me you need to think well on the strategy you need to have in Moto3. I agree it was not the intention of Deniz but unfortunately we need to have I think also during the race big penalties for the ones that make some strange movement on the straight especially.”

“It’s not the first time we see something like this in Moto3. In Barcelona also Rodrigo has done the same but more lucky because we didn’t see any accident. I think that we have seen a lot of strange movements, we are also lucky that we were here, that the straight is very very large and the wall is a bit too far and I think it’s good that he received this type of penalties, but, it’s the only way for sure to start to change something but they have to think on something more because like this will be always very very dangerous.”