After just two years since its introduction, the Speed Twin has already undergone a fairly major revamp

by Rennie Scaysbrook
in Triumph News, Triumph Reviews
A A
Share on FacebookShare on TwitterShare

It almost seems Triumph has a birth right to the modern retro market. That oxymoron of a term has been thrown around by the world’s manufacturers for about 20 years now, ever since Ducati bought out the legendary Paul Smart replicas in the mid-2000s.

However, Triumph has been more consistent in looking backwards to go forwards with bikes like the various Bonnevilles, Scramblers and Thruxtons, not to mention the bike we have on test now in the $20,890 (ride-away) Speed Twin.

The Speed Twin in 1200 form is only two years old, seeing its release back in 2019 as part of Triumph’s 80th anniversary of the first twin-cylinder Bonneville. For a bike aimed more at the café riding crowd, you could forgive Triumph for calling it done and coming back for a revisit in five years, but Triumph’s seen fit to give the 2021 edition a proper makeover.

No doubt the addition of Euro5 compliance was a contributing factor, but there’s still plenty to get excited about. The pulsating British twin pumps out a claimed 73 kW at 7250 rpm and 112 Nm of torque, with the peak torque measured 500 rpm less than in 2020.

This is achieved via a lighter crank, new pistons and cylinder head, revised camshafts and a new exhaust that deftly hides the catalytic convertor and looks like an old-school straight-through system—a look that’s somewhat spoiled by having fugly black end caps fitted.

Despite this minor fashion faux pas, the Speed Twin is indeed a looker. Mixing a modern look and performance via the new 43 mm inverted Marzocchi forks and Metzeler Racetec RR rubber with little retro touches like dual analogue clocks (albeit with small digital faces for trips, fuel, etc) and a flat bench-style seat, Triumph’s styling department has done rather well with the Speed Twin’s aesthetic.

This fact was confirmed when an old bloke who was walking around our photo location took a bit of time to be convinced this was indeed a 2021 edition and not something from the 1960’s. It’s always nice when that happens.

The Speed Twin is more than just a doff of the cap to bikes of yesteryear, it also mimics them in overall size. With a seat height of just 809 mm compared to the 820/830 mm seat heights more commonly found on modern nakedbikes, the Speed Twin feels small.

I’m 183 cm tall and for me the ride position is just too cramped to get anything more than a 45 minute ride before I start to get all bothered, although being a neutral riding stance it’s easy for me to stand and stretch out on the Speed Twin if needed.

That fact alone makes the Speed Twin a frustrating prospect to me, because everything else about the motorcycle is just lovely.

Let’s start with the engine. At 1200 cc, one might think this little donk would be a bit too much unless you’ve got decent miles under your belt but the reality is somewhat different. The Speed Twin has a delightfully smooth power delivery, matched to three engine maps of Sport, Road and Rain.

Although you could probably just run Sport and not worry about the rest as Triumph has done a brilliant job with the throttle mapping so you don’t get a massive hit of torque when you open the throttle while cruising slowly around town.

Having said that, there’s more than enough to get up and boogie. This is a 1200 cc twin, after all, and it’ll be more than capable of hustling up the side of a mountain or when you need to rip through traffic.

The motor spins up surprisingly quickly for a 1200 twin, and the silky smooth throttle response somewhat hides the amount of go clenched in your right hand. It’s geared rather tall, but there’s plenty of performance on offer in third and fourth gears as you zip from corner to corner.

There’s no quick-shifter so gearshifts are done the old fashion way with a clutch, but there’s nothing wrong with that and, again, Triumph’s done well to give you a gearbox that’s as smooth as the engine is punchy.

One of the best parts of the motor is what happens after you crack the throttle. Regardless of my dislike of the black end cap on the pipe, man, that pipe sounds good. It’s got that oh-so-British thump to the exhaust note, making this – along with the company’s three-cylinder nakedbikes like the Street and Speed Triple range – one of the best sounding motors (in my opinion) around. It’s certainly one of the most recognisable.

Triumph claims a wet weight of 216 kg (thanks Triumph, because claimed dry weights are useless) for the Speed Twin with a full 14.5 litres of fuel, so it’s not exactly a featherweight, but what’s there is carried rather well.

It pays dividends not to ride the bike like a lunatic despite the upgrade from skinny, conventional 41 mm forks, to the chunkier 43 mm inverted Marzocchi legs now fitted giving plenty of feel at the handlebars and excellent road holding.

Being a relatively slim motorcycle, the Speed Twin has excellent agility when switching direction, helped in no small part by the upright stance than the wide (ish) handlebars. You’re sitting in a very neutral stance on the Speed Twin, which is fine for the most part but wind protection is next to zero for freeway rides, and the flat bench seat does get pretty hard and uncomfortable after about 45 minutes.

The Speed Twin doesn’t love a rough rider, but instead responds well to the wide corner arches and gentle braking character the aesthetic would suggest.

If you do want to pretend you’re Remy Gardner on a Triumph-engined racer, at least you have decent stopping power in your right hand in the form of Brembo’s radially-mounted M50 calipers and 320 mm discs (up from 305 mm on the 2019 bike).

These are the same stoppers used on the last generation Kawasaki ZX-10R, and although the Italian brake masters have gone up a few grades since with models like the Stylema and Stylema R calipers, they are a damn sight better than the very old school conventionally-mounted calipers from the 2019 bike.

A nice touch from Triumph was to include decent rubber when you pick up a Speed Twin. Metzeler’s Racetec range is indeed very good and to have them fitted to a modern retro gives this bike more grip than it could conceivably need, which is a good thing. Too many times, manufacturers will skimp on fitting good sporty rubber, leaving the choice up to the customer but at least the Hinckley crew has taken this headache away from you.

My time with the Triumph Speed Twin was nice but I have to be honest and say this bike wasn’t for me, simply because it’s too damn small. At my height, I felt everything needed to be stretched out 10 per cent or so, just to give me a bit of extra room in the cockpit, a bit more room for when I do try and turn up the wick in the twisties, a bit more room to make general cruising a little more comfortable. See what I’m getting at here? 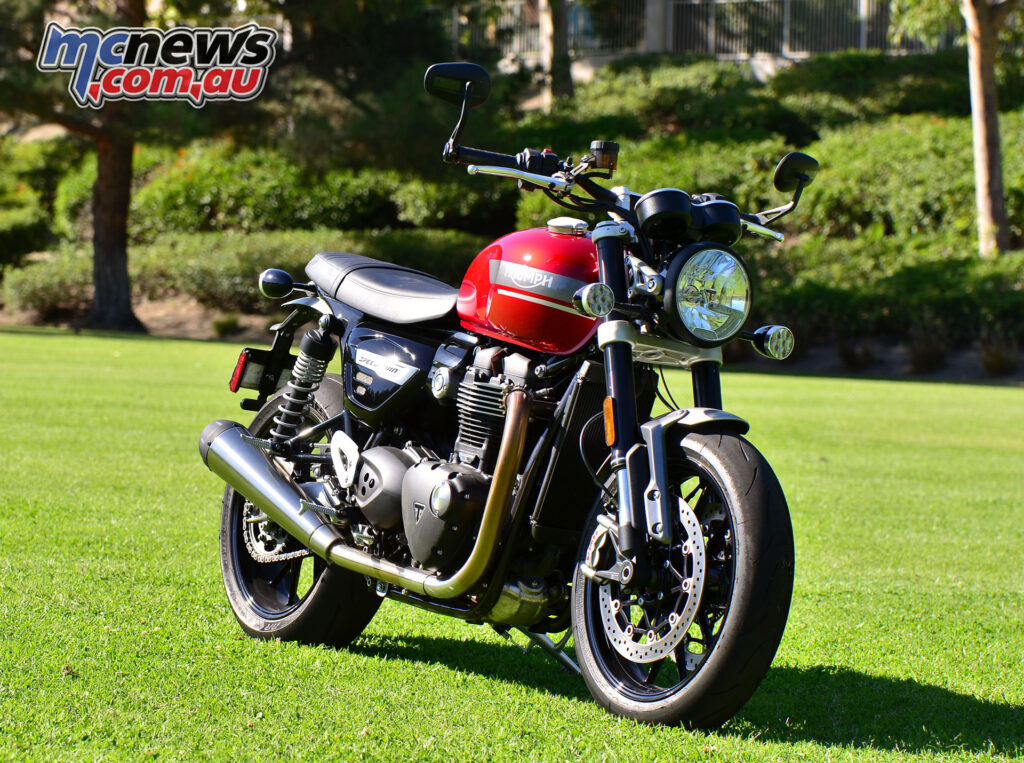 My findings are the most subjective thing of this test (I guess that’s why Trev pays me to write them for him), so if you’re shorter than me, perhaps you won’t have as many gripes.

The size factor is annoying because, as I’ve said, everything else on this bike is really nice. The fit and finish is superb, the chassis a willing and compliant partner – especially given the beefier forks and brakes – and the motor has such a tough, British character to it. Couple these facts with the LED lights, built in immobiliser, underseat USB charging port and traction control and the Speed Twin is very difficult not to like.

If Triumph makes a 1300 cc version that’s a touch bigger everywhere, I’m sold, but I don’t think that’ll be happening any time soon.