Vince Friese and Marvin Musquin both took an early advantage over the rest of the field but Jason Anderson soon joined that party.  The Kawasaki rider dispensed with Friese in no time and also made short work of Musquin.  Made them both look like amateurs really, such was the ease in which he blew past them.

Chase Sexton had an early tumble and was down in seventh place but he regrouped and put his head down and managed to climb his all the way back up to second place by the flag. The untroubled victor though Jason Anderson.

Malcolm Stewart scored the holeshot but then a small bobble allowed Cooper Webb to sneak past him. Mookie came right back at him though to re-take the lead.  Justin Barcia then moved past Webb to take second place before chasing down Stewart and eventually taking the win.  Eli Tomac third ahead of Cooper Webb and Justin Bogle.

Justin Barcia scored a major holeshot ahead of Jason Anderson and Malcolm Stewart while Eli Tomac was fourth ahead of Marvin Musquin and Chase Sexton.

Tomac was through on Mookie on lap two and he then wasted little time closing in on Jason Anderson.  He took his time with the Kawasaki man and didn’t challenge for that second place until he saw a safe opportunity to make the pass with as little risk as possible, but lapped traffic saw him have to delay his moves.

The lappers slowed the front runners quite considerably.  Jason Anderson took the lead nine-minutes in, but then hit the deck after clashing with Barcia and was relegated from P1 to P7.  Coming out the other side of that incident with the race lead was Barcia.  But Tomac was on a charge and looming large… Musquin a strong third, Stewart fourth and Sexton fifth just ahead of Copper Webb and the recovering Jason Anderson.

Eli Tomac took the lead with five-minutes left on the shot clock and once in front immediately put the hammer down and escaped from the clutches of Barcia. Musquin was third and Stewart fourth but a mistake with just over two-minutes remaining saw him on the deck and losing a number of positions,.

Once in the lead Eli Tomac pulled away with apparent ease and with a couple of minutes remaining had four-seconds on Barcia. He backed off in the closing stages but still took a comfortable win over Barcia despite a mistake on the final lap.

Musquin rounded out the podium ahead of an exciting battle for fourth between Sexton and Webb that went all the way to the flag.  It was Sexton by a nose for that fourth place.

Four victories in a row for Tomac. And that win moves him into fifth place on the all-time 450 winners list, one win behind Chad Reed, and only five wins behind Ricky Carmichael.

Tomac now enjoys a 41-point lead over Barcia and Anderson who are joint-second on the points table.

Cameron McAdoo scored the holeshot in the opening 250 Heat after carrying the most speed into turn one to take the advantage ahead of RJ Hampshire and Jace Owen. Jordon Smith was fourth early on ahead of Mitch Oldenburg.

Jordon Smith worked his way ahead of Owen to move up to third place but the order up front remained the same throughout.  McAdoo winning by four-seconds over Hampshire while Smith rounded out the podium a further 13-seconds behind Hampshire.

Jett Lawrence went down along with what looked like a third of the field at turn one, the Aussie teenager having to run back to his bike before eventually getting his race started from 13th place, 12-seconds behind race leaders Pierce Brown and Kyle Chisholm.

Lawrence was an innocent party, getting sandwiched between two riders that went in too hot on the run towards turn one. He was ejected from his CRF250R and suffered a significant tumble that he was incredibly lucky to escape from without serious injury. An amazing escape that could have potentially been season ending. 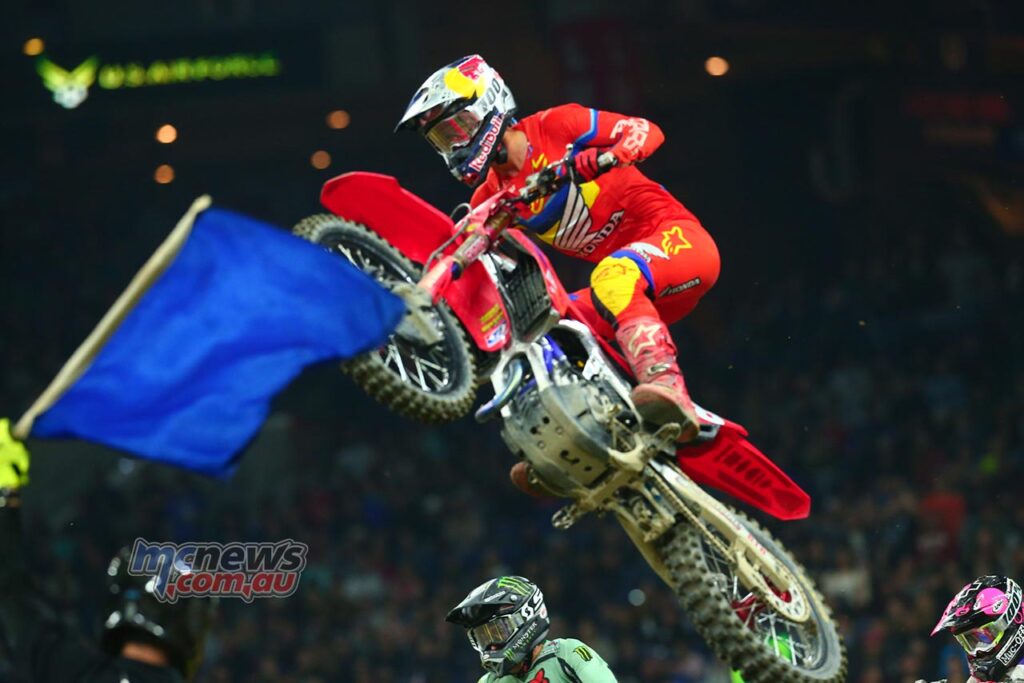 Pierce Brown went down hard while leading with only a couple of minutes to run, he went over the front in the whoops and landed hard into the ground. He was conscious throughout but in serious discomfort and was helped off the field by medical staff. Inheriting the lead was Kyle Chisholm.

Jett Lawrence was up to fifth with a minute and a lap remaining in the six-minutes plus one lap distance. He then worked his way up to second before jumping past Chisholm like he was standing still just after the last lap board. He then went on to pull away by four-seconds on that final lap to take an absolutely amazing victory.

Jett Lawrence’s fastest lap in this Heat was an incredible 2.5-seconds faster than any other rider in the field. And this on a lap that that took less than 45-seconds…

Jett Lawrence scored the holeshot with Cameron McAdoo right on his tail.  This pair have been the pacesetters since Forkner’s demise the other week and thus this had the potential to be an intriguing battle.

McAdoo hung with Lawrence and took the lead just over three-minutes into the Main as soon as he saw a safe opportunity, and immediately capitalised on it. He then pulled out a two-second lead over Lawrence over the course of the following couple of laps, before Lawrence started reeling him back in as the race approached half race distance, just as the pair started encountering lapped traffic.

Lawrence saw his moment to thread the needle in the lappers to pass McAdoo relatively easily and safely.  A lap later though Jett made a mistake that allowed McAdoo to close right back on him after the Aussie failed to clean a triple after getting a bit too sideways on the approach.

Jett regrouped though to again eke out an advantage over McAdoo and went on to take victory by six-seconds.

McAdoo also set the fastest lap of the Main and to underline the superiority of McAdoo and Lawrence, they both finished the race almost half-a-minute ahead of the rest of the field.

RJ Hampshire rounded out the podium, 35-seconds behind Lawrence in what was only a 15-minute race.

Next week Supercross heads to Seattle for the switch back to the 250 West Championship.  Jett takes an 11-point lead into the break, McAdoo still right on his tail…. 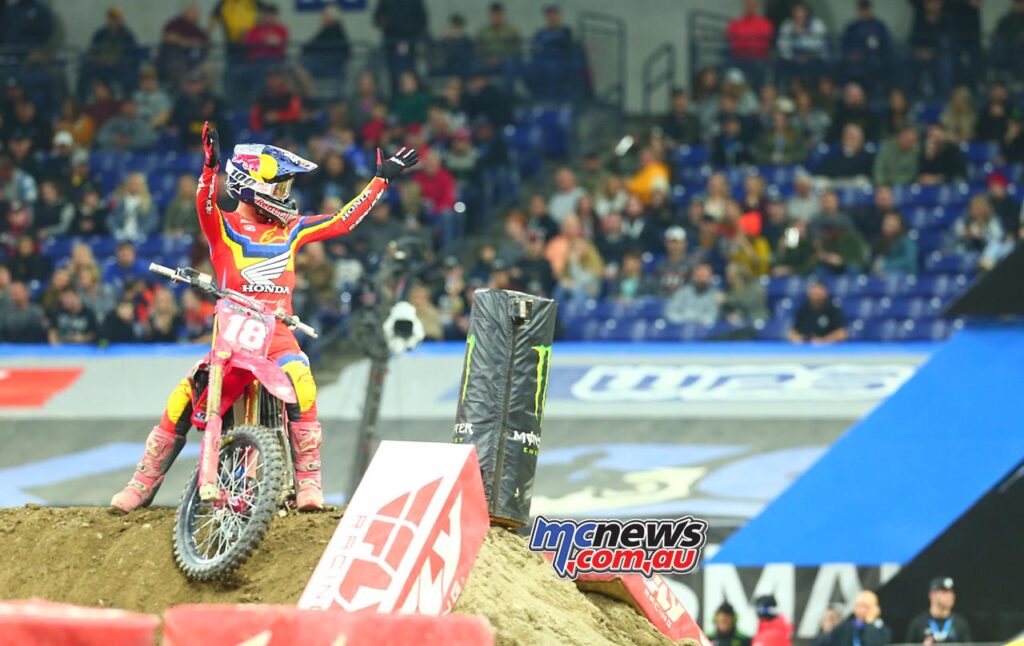