For this fourth round of the 2022 Australian Superbike Championship in Darwin we have a slightly different qualifying format.  All competitors contest a 20-minute Q1 session almost immediately followed by a 15-minute Q2 session for the 12 fastest riders from Q1.  And today tyre preservation will also be very much front of mind for riders and their teams, they need to go fast, but they also need to do as few laps as possible on their rubber as they save wear on their tyre allocation for the three 16-lap races this weekend.

Wayne Maxwell and Bryan Staring both dropped in 65s on their third lap out, a 65.654 for the defending champion and 65.882 for Staring. Maxwell then went quicker again a 65.491, only to be immediately gazumped by Staring who put in a 65.448 on his fifth lap of the session.

Lachlan Epis then joined the Ducati duo in the 65s, a 65.997. That time coming despite having to switch to a different firmware in the BMW ECU.  In a strange twist overnight it seems Motorcycling Australia have now rendered the firmware the team was penalised for using at QLD Raceway (PRO), now the only permissable option for BMW competitors. Thus the BMW Alliance Team had to build new maps overnight to use today, as the maps for the PRO firmware are not interchangeable with the Superstock (STK) firmware.

Cru Halliday, Arthur Sissis and Mike Jones then all went into the 65s to make it six riders in that bracket. Most would now settle despite the session at this juncture only being halfway through. They only need a lap to get them in that top 12 so they can then sit back and wait for Q2 while saving rubber.

Wayne Maxwell didn’t read that script…. The Boost Mobile Ducati man went out again and dropped in a 65.246 with seven-minutes remaining in the session.

Mike Jones was the early pacesetter in the final qualifying session, a 65.411 on his second lap out and Cru Halliday then made it a YRT 1-2.  Wayne Maxwell then leap-frogged them both with a 65.402 but grip was looking hard to find, plenty of lurid layers of Pirelli liquorice being painted on the Hidden Valley tarmac.

Bryan Staring was fourth quickest at this early juncture on 65.848. Josh Waters had dipped into the 65s for the first time this weekend with a 65.943 and was then joined by his Maxima Oils BMW team-mate Glenn Allerton on 65.874.

Staring improved to 65.521 to split the YRT men at the halfway point of the 15-minute session. Daniel Falzon then made a huge leap forward to sixth with a 65.792.

With six-minutes remianing we had eight riders in the 65s just as Mike Jones went top with a 65.330 to lead and Staring improved to 65.374 to go P2 ahead of Maxwell. Then all three of them were quicker again through the opening sector of the next lap….

Jones down to 65.213, Staring 65.330 but Maxwell then lowered the qualifying lap record with a 65.065.  Four minutes to run and we now had ten riders in the 65s after Mark Chiodo and Troy Herfoss joined the club.

Maxwell then dropped in the first ever 64-second lap of Hidden Valley to underline his pace, a 64.962 on his seventh lap with three-minutes remaining in the session.

At this stage Lachlan Epis had not managed to match his impressive Q1 time, a 66.182 only good enough for 11th just ahead of Anthony West. Epis then  dropped into the 65s again, a 65.940, but that still didn’t improve his grid position from 11th as Chiodo in tenth had done a 65.863.

Troy Herfoss then got wound up on the penultimate lap of the session, 65.553 a huge leap forward of more than half a second from yesterday for the Penrite Honda man. That will  be a massive boost to his confidence ahead of the races.

Lachlan Epis improved his standing on his final lap to push Chiodo outside the top ten.

Defending champion Wayne Maxwell will start this afternoon’s 16-lap race from pole position with current championship leader Mike Jones alongside him. With that pole position he also gets one point closer to Jones, the gap narrowed to 22-points. 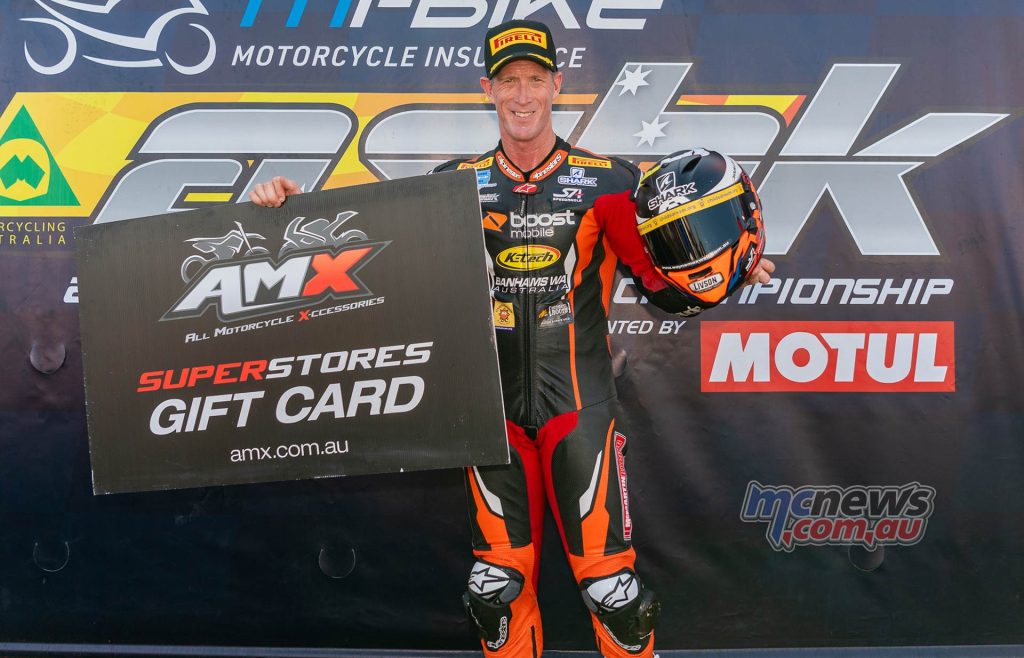 Bryan Staring rounds out that front row ahead of Josh Waters, Cru Halliday and Troy Herfoss.   Josh Waters had improved late in the session and only missed the front row by two-thousandths of a second.

Arthur Sissis heads row three ahead of Glenn Allerton and Daniel Falzon while Lachlan Epis will start from the fourth row.

It is shaping up to be an amazing contest this afternoon…