Peter Hickman has closed out the 2022 Isle of Man TT with an emphatic victory in the rescheduled Milwaukee Senior TT. It was the Lincolnshire rider’s 4th win of the week and 9th of his career. He leaves the island tied with the legendary David Jefferies in the all-time winners list and joins an elite club of just four who have managed a quadruple in a single year at the races.

Once again Hickman had his old rival Dean Harrison snapping at his heels throughout the six-lapper. However, barring a mechanical issue, a Hicky win never really looked in doubt. In the end the Gas Monkey FHO BMW crossed the line 16.9s ahead of Harrison with Conor Cummins in third. Cummins had a fantastic race long tussle with his teammate Davey Todd that kept the punter’s around the circuit glued to their radios, desperate for information from each time-check during the 2-hour race. Todd lost out by just 2.8s at the flag but each of the Milenco by Padgetts Honda men did themselves proud on the day.

The Senior was almost 24 hours late when it got underway at 11am on Saturday. A fatal sidecar crash and poor weather had caused delays on Friday and meant it couldn’t go ahead as scheduled.

There had also been uncertainty over whether the Senior could run at all on Saturday as there was a lack of marshals left on the island. After an appeal that saw Hickman himself (amongst other competitors) call for those willing and able to make themselves available, the race finally got the nod to go on Friday evening.

It was an unusually nervous John McGuinness who led the field away at number one.’ My stomach’s churning’ he revealed on the start line. You couldn’t help but wonder if this was his last ever race on the island.

But there was no room for sentiment as attention turned to Glen Helen on the opening lap. Harrison already led on the road and was half a second up on Hickman, indicating a re-run of their 2019 classic might be on the cards. Todd and Cummins slotted in directly behind the leaders in 3rd and 4th. But Michael Dunlop was surprisingly already off the pace down in 5th. 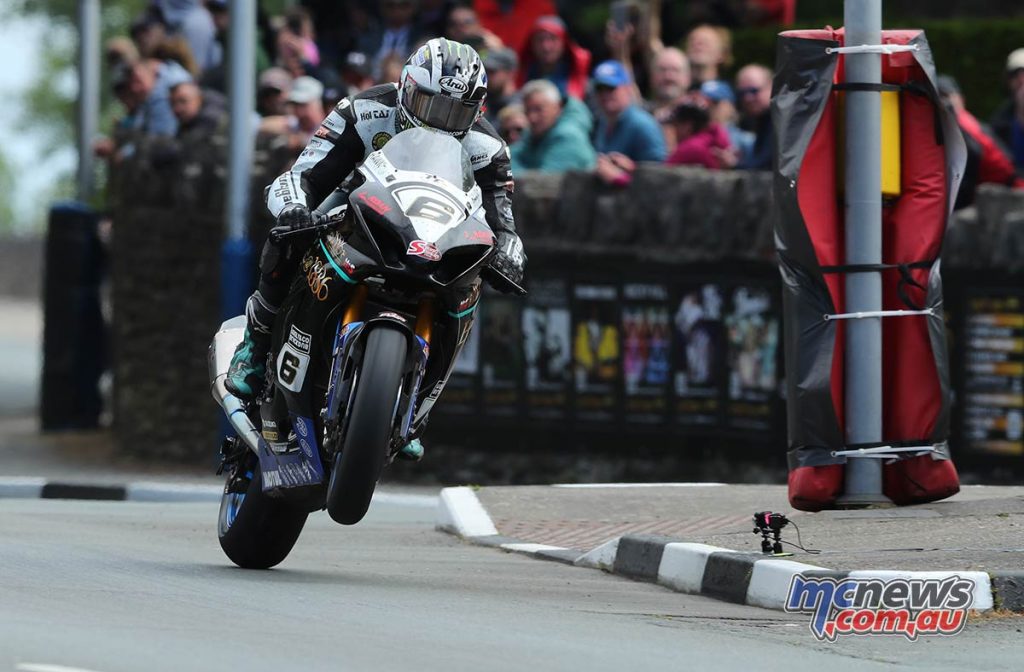 At Ballaugh, Hickman took the lead for the first time and from then on, he was never headed. At each split on that opening lap Harrison would lose 2.5s and trailed the leader by 8.3s at the Grandstand. It would only come to light later that the Bradford rider had suffered a bird strike which had punched a hole in his screen.

The bird caused Harrison all sorts of problems, not least great pain in his neck and shoulders. He still lapped at 131 on that first lap though. And the live feed showed the Dao Kawasaki in a 2 wheeled drift through Greeba – he was clearly minimising the impact of any issues he was experiencing.

Our feathered friends seemed determined to get involved in proceedings. Yellow flags were reported at Quarry bends as a family of ducks crossed the road. Thankfully they all got over safely.

By Glen Helen on lap 2, Hickman had caught Todd on the road and Dunlop had caught James Hillier. But by Ramsey Hickman was with Dunlop. The spectacle of the TT stars riding superbikes together on the Manx roads truly was a sight to see. The pair are the only solo riders to record a win this year.

The traffic clearly didn’t hinder Hickman, for at the end of the 2nd circuit his lead was out to 14.6s.

By the time the leader pitted, Harrison was refuelled and away. Hickman lost a few seconds at his pit stop but it was nothing to worry about.

However, there was some drama in gasoline alley.

McGuinness got done for speeding (he copped a 10s penalty) and James Hillier had a catastrophe when he missed his pit. Davey Todd was on his inside and the OMG Yamaha couldn’t turn in. It wasn’t Todd’s fault – he had his own stop to make, it was simply one of those things.

Conditions for the race were far from perfect. Strong winds were causing all sorts of problems during the race and the likes of Michael Rutter, Mark Parrott and Gary Johnson parked up in the pits due to the dangers presented by blowing gales. Each said they simply weren’t having fun and it wasn’t worth the risk. A fair call to make given the tragic events of the past 7 days.

Lap 3 was fairly uneventful. Hickman’s lead stayed around the 10s mark until the Bungalow when it stretched out to 15.3. When they checked again at the Grandstand, it was 18.6.

On lap 4, the gap between 1st and 2nd remained roughly around 18s but the fight for the final podium spot was really heating-up. It was fractions of a second that separated Todd and Cummins. With Todd seeming to gain an advantage when Cummins hit traffic.

The 2-metre man got caught up in a scrap with McGuinness and Dunlop who were racing for position on the road. In fact, the Manxman towed Hillier back up to Dunlop and this would really aid his final position come the end of lap 6.

The 2nd round of pit stops had less drama, but they did see the demise of the fastest newcomer ever, Glenn Irwin. A disappointed Irwin called it a day as he had an issue with his rear Metzeler – it felt like someone was tapping his back wheel with a hammer he said.

Ears pricked up when Hickman arrived at Glen Helen on lap 5, for he had lost a chunk of time to Harrison on the run from Douglas. At Ballaugh he had lost another second. The fans began to wonder if the BMW was starting to slow as it had in 2019. But it would transpire that there was nothing to worry about; a false dawn for the Harrison camp. The lead was out to 14.7s at the Bungalow and as they started the final lap it had increased to a healthy 16.5s.

A similar pattern emerged on the final circuit as Harrison gained time in the opening miles. However, Hickman was waving to the fans at Ramsey and at that stage the outcome of the Senior was in little doubt

On that final lap Cummins kept Todd consistently at a safe distance of just over 3s which is really nothing at the TT. Todd more or less matched him over every mile but couldn’t eat into the advantage. The locals celebrated in relief when Cummins second podium of the week was finally confirmed at the finish. Todd came home well ahead of Michael Dunlop and James Hillier.

There was news that popular Dominic Herbertson had crashed at Glen Helen on the last lap and was airlifted from the scene. Thankfully, he was later discharged and photos of him on his feet emerged later on social media platforms- a very welcome sight.

But today was all about Peter Hickman and his domination. How long will it last? On current form, it’s hard to imagine anyone having an answer for him on the superbikes any time soon. Despite the close attention of the likes of Harrison, Hickman seems capable of raising his game when needs be. You have to wonder what his tally would be if it wasn’t for Covid. The coming years will be fascinating.

Many regard the Senior TT as one of the finest, if not THE finest prize in motorcycling. It’s impossible not to get caught up in the excitement and the prestige that goes along with seeing the best road racers on the planet compete over six laps for that beautiful, historic trophy. However, there is no denying that today’s occasion had a tinge of sadness – a sombre backdrop due to the events of the past few days. While the dangers are well documented and no one goes to the island against their will, five fatalities in a week is a serious figure to consider and one that’s hard to fathom.

This year had it all. The glory, the excitement but unfortunately also the horror. Today is evidence (if it were ever needed) that no matter what, on the Isle of Man the show will go on. We can only hope that for the 2023 edition, fate will be a little less cruel.