Eli Tomac scored the holeshot from Barcia, Musquin and Anderson. The Yamaha man threaded the needle the best to emerge from turn one with the lead.  From there Tomac and Barcia started to pull away from the field.   Barcia was chasing Toamc hard and was very animated on the bike, while Tomac, although he did make a little mistake here and there, looked like he was on a Sunday ride just conserving energy…

Five-minutes into the Main defending champ Cooper Webb, was down in eighth place and already 20-seconds behind the race leader, presumably suffering a little from the hard crash he sustained during qualifying.

Barcia was a few seconds behind Tomac but then went down in a rhythm section halfway through the Main after clipping a tough block. By the time Barcia was back up to speed he had been pushed all the way down to fifth, losing more than 20-seconds in the incident.

That promoted Anderson up to second place but he was 13-seconds behind Tomac with ten-minutes remaining. Musquin was a couple of seconds further behind Anderson in third. Malcolm Stewart was fourth at this juncture while Barcia and Webb contested fifth place.

Little changed in the latter half of the race.  Tomac just kept clicking off laps before easing off on the final lap to take the chequered flag ten-seconds ahead of Anderson.

Marvin Musquin rounded out the podium ahead of Malcolm Stewart. Justin Barcia won that battle over fifth ahead of Cooper Webb.

Tomac’s 44th victory ties him for fourth place in the all-time winners list with Chad Reed. The 29-year-old will take a 54-point lead over Jason Anderson to St. Louis in two weeks time.

Chase Sexton never made the Main after a brutal crash in qualifying left the Honda man injured.  Cooper Webb had also suffered a heavy fall in qualifying but still braved the Main to put 17-points on the board.

The series now has a small break before reconvening in Missouri on April 9 for the 13th round of what will be a 17-round championship. Tomac could not finish two of the five remaining rounds and still be leading the championship…

Christian Craig fired straight back into form and an early lead in the 250 Main head of Michael Mosiman and Jo Shimoda.  A couple of minutes in Hunter Lawrence moved up to third place, demoting Shimoda to fourth.

Michael Mosiman managed to chase down Craig and then put a pretty tough move on Craig which left the Yamaha man on the deck.  Craig was down in sixth place by the time he was back up and running. To be fair though, Craig should have probably given Mosiman the room he wanted rather than sticking to his line.

Craig’s fall promoted Lawrence up to second place and the Australian then dropped the hammer to try and chase down Mosiman. It only took Hunter a couple of minutes to catch and then pass Mosiman.

Craig was back up to third with nine-minutes left on the shot clock. A couple of minutes later he breezed past Mosiman and left the GASGAS rider in his wake with apparent ease.

With four-minutes plus one lap remaining Christian Craig was three-seconds behind Hunter Lawrence.  That gap ebbed and flowed in favour of each rider as they negotiated lapped traffic. At the last lap board the gap was 1.5-seconds but Lawrence hung on all the way to the flag. 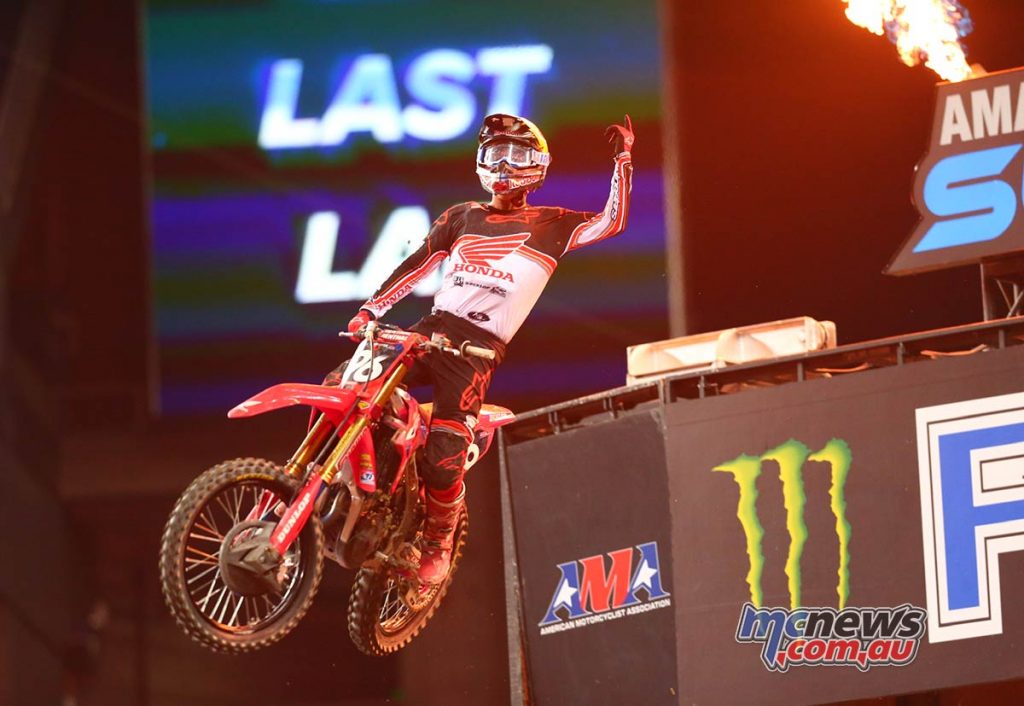 Victory for Hunter but yet another remarkable comeback from behind for Craig in a season where he has so often had to do exactly that.  Is he just unlucky? Or is he not responding to attacks by riding smart and giving his opponents room to pass, as he generally always has the speed to be able to run them down once again.

Craig leads the 250 West Championship by 26-points over Hunter Lawrence. With only three rounds still remaining Craig remains the firm favourite for the title.

Jo Shimoda went for a move on Mosiman at the final turn for third place, but a mistake saw the Kawasaki rider miss his mark and have to settle for fourth. Mosiman rode much of the race with no rear brake after bending his rotor while making a pass early on in the race.

Vince Friese fifth ahead of Garrett Marchbanks and Chris Blose.  Nate Thrasher had been running within the top three before a crash put him back in the pack, he recovered to 11th.

The series now has a small break before reconvening in Missouri on April 9 where it will be back to the 250 East Championship in St. Louis.  The following weekend in Atlanta will see a combined 250 East-West showdown before the East competitors then head to Foxborough the following weekend, then it will be 250 West again in Denver before the East-West final championship showdown in Salt Lake City on May 7.