World Championship leader Fabio Quartararo (Monster Energy Yamaha MotoGP) clashed with his nearest rival in the points table, Aleix Espargaro (Aprilia Racing), early on and crashed out – and the incident also left Espargaro down in P15 and facing a fight back. But fight back he did and that as Quartararo crashed again later in the race, the Frenchman ultimately taking home a nil points and then was also given a Long Lap penalty for the Monster Energy British Grand Prix after the summer break for the overly ambitious move.

Meanwhile, Marco Bezzecchi (Mooney VR46 Racing Team) put in a stunner to follow Bagnaia home with some breathing space and take his first premier class podium, with Maverick Viñales (Aprilia Racing) shooting up from P11 on the grid to third, visiting parc ferme with Aprilia for the first time.

And did we mention Aleix Espargaro’s 2-for-1 on Brad Binder (Red Bull KTM Factory Racing) and Jack Miller (Ducati Lenovo Team) at the final chicane for fourth?!

Rewinding to before all that, Bagnaia launched well and led the field into the first corner, while Quartararo briefly dropped back to fourth when he ran wide as he tried to go with the pole-sitter. He quickly re-passed Jorge Martin (Prima Pramac Racing) and also went down the inside of Espargaro at De Strubben, but then couldn’t keep the RS-GP behind him when they ran up the back straight.

Bagnaia had 0.7 in hand at the end of the first lap, by which time Bezzecchi had passed Miller for fifth, and the rookie was into fourth when he overtook Martin at the start of Lap 3. Miller then dropped from sixth to 10th on Lap 4 when he served his Long Lap Penalty for irresponsible riding in Q2, facing his own comeback.

On Lap 5 though, it was high drama at Turn 5 as the top two in the World Championship came together. Quartararo looked to make a move on Espargaro but dropped his Yamaha and slid into the Aprilia, no saving it. The Frenchman was last by the time he had remounted, and while Espargaro did well to stay upright and avoid a crash, he still plummeted to 15th and was facing one serious Sunday fight back from the gravel.

That left Bezzecchi in second, with Bagnaia’s advantage over the field out to 1.3 seconds and Martin holding third ahead of Binder. The South African was back to fifth when he was overtaken by Viñales as they ran through the Ossebroeken complex on Lap 10, however, with the number 12 on a charge.

A few laps later, De Strubben then bit Quartararo again – hard. The Frenchman had already dropped off the lead lap after a visit to the pits before he fell off for a second time once back out, highsiding on the exit of the slow left-hander. Thankfully, Quartararo got onto his feet and was given the all clear, having adding no injury to the insult of two crashes.

Meanwhile, Bagnaia continued to lead as Espargaro mounted his fightback. The Spaniard was already closing in on the battle for ninth between Zarco and Joan Mir (Team Suzuki Ecstar) when, a couple of positions ahead, Takaaki Nakagami (LCR Honda Idemitsu) was then given a Long Lap Penalty for exceeding track limits, promoting #41 to the top ten. And there was plenty more to come.

Virtually the only thing that hadn’t happened by that stage was rain, but it soon started falling as well. Rain flags and then the white flag, signalling that riders were allowed to change bikes, started to wave, but it never got heavy enough to force them to do so. Still, it made for a tricky period in the race, as Viñales passed Martin for third at the Geert Timmer Chicane on Lap 17, then both Binder and Miller overtook the Pramac rider on the next lap.

For the second weekend in a row, Miller was doing an admirable job of recovering from a Long Lap Penalty, passing Binder for fourth at the start of Lap 21 and wasting little time in closing up to Viñales as he sought consecutive podiums. He looked to have made the move at the Timmer Chicane at the end of Lap 25, but was in a bit too hot and had to bail out of it, which put him back under pressure from Binder.

Up ahead and free of all the mayhem, however, Bagnaia cruised to victory. He eased off at the end, with the winning margin officially only 0.444 seconds after 26 remarkable laps, but it never seriously looked in doubt.

Bezzecchi sent the VR46 team into raptures with his first premier class podium, and Viñales was less than a second further back in third after escaping the clutches of Miller.

Aleix Espargaro, meanwhile, wasn’t done. The Aprilia rider had risen to sixth and that looked like an admirable salvage job, but then he dive-bombed Miller and Binder as they ran into the Timmer Chicane for the final time – and pulled it off with such perfection it’s a contender for move of the year.

Fourth snatched away, Brad Binder would take fifth, ahead of Miller, Martin, and Mir.

Joan Mir had a couple of close brushes after contact with Miguel Oliveira (Red Bull KTM Factory Racing) as they lined up on the grid before a clash with Luca Marini (Mooney VR46 Racing Team) once the race had actually started. Oliveira shed bodywork in that incident but still finished ninth, ahead of Alex Rins (Team Suzuki Ecstar), Enea Bastianini (Gresini Racing), Nakagami, Zarco, Fabio Di Giannantonio (Gresini Racing), and Alex Marquez (LCR Honda Castrol) in the final points position.

Raul Fernandez retired with arm pump, while Franco Morbidelli and Darryn Binder made it three YZR-M1 riders who crashed out of the contest as Yamaha leave the Cathedral pointless, echoing Honda at the Sachsenring.

If Aleix Espargaro had not got pushed out into the gravel by Quartararo this story may have had a different ending, as the Aprilia rider was the fastest man on track for much of the race. Aleix scythed his way back through the field to claim those vital 13-points which closed the gap to championship leader Quartararo back down to 21 points.

Despite a disappointing showing at Assen with 13th place Johann Zarco retains third place in the championship chase, eight-points ahead of Dutch TT winner Pecco Bagnaia. Despite the strength of the Bologna battalion at this stage it looks likely that they will again miss out on the ultimate prize of a Ducati rider being crowned World Champion. Only Casey Stoner has managed to bring that reward to Ducati, and that was 15 years ago…

Now though, the MotoGP paddock now has the summer break to catch its breath before Round 12. The Monster Energy British Grand Prix descends on Silverstone from the 5th to the 7th of August, and there’s absolutely everything to play for.

The Moto2 World Championship sits on a knife edge going into the summer break after Augusto Fernandez picked up his second win in a row, coming out on top in a true classic at the Motul TT Assen. The Red Bull KTM Ajo rider is now equal on points with Celestino Vietti (Mooney VR46 Racing Team), who finished fourth, although the Italian leads as it stands thanks to more wins so far this season. 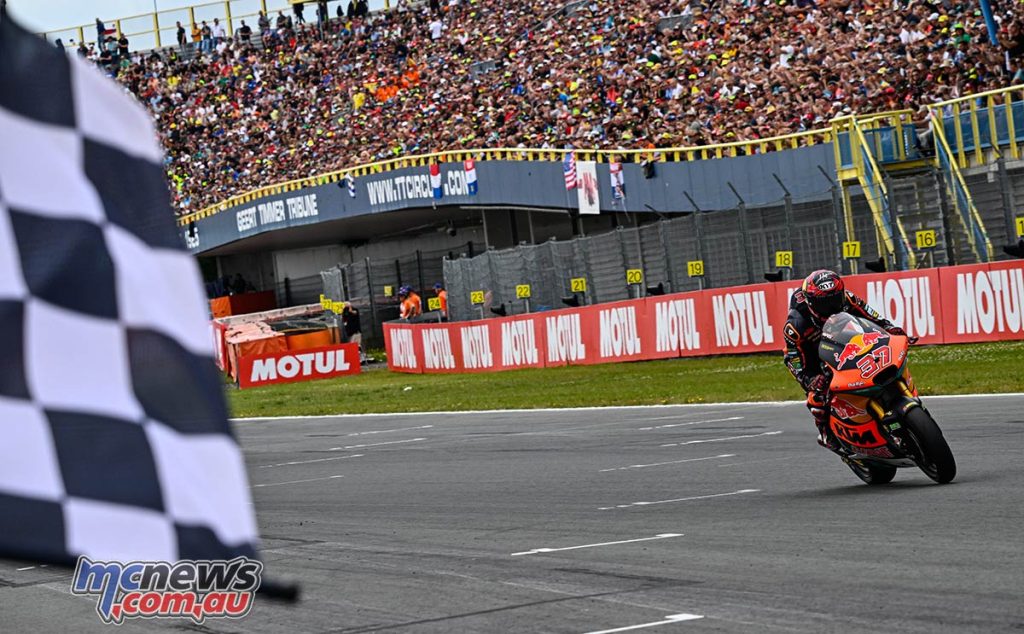 Ai Ogura (Idemitsu Honda Team Asia), meanwhile, sits just a point further back after hauling his way back from as low as 16th to claim second on the day, with pole-sitter Jake Dixon (Inde GASGAS Aspar Team) completing the podium.

Some drama hit for Dennis Foggia (Leopard Racing) as he crashed out, and Jaume Masia (Red Bull KTM Ajo) likewise after the number 5 suffered contact on the final lap.

Young Aussie Joel Kelso got taken out once again. Another rider crashed into him which sent the teenager into one hell of a high-side. It was a sickening impact and despite Kelso remaining conscious throughout it looks likely he has suffered a fracture to his ankle and/or foot.

MotoGP now pauses for the month of July. The season will resume with the Monster Energy British Grand Prix at Silverstone on the first weekend of August – John McPhee’s home round – and where Husqvarna Motorcycles tasted Moto3 success in 2021.

“It took a long time, a lot of training and sacrifice and finally I could win! It’s amazing. This year so far has been difficult, with the injury, but we came back strong and the bike has been very good. It was a great race and I kept behind Izan [Guevara] and had the pace. To win is unbelievable and I want to thank everyone that’s supported me and all my family. Now into the summer break and hopefully the second half of the season will carry on like this and be better than the first.”

Eric Granado (LCR E-Team) was rewarded for his bravery in tricky conditions as the Brazilian took victory in Race 2 of FIM Enel MotoE World Cup at the Motul TT Assen. Granado scythed his way from fourth to the lead in just three laps in a contest which would be cut short due a Red Flag, with points leader Dominique Aegerter (Dynavolt Intact GP MotoE) claiming second and Mattia Casadei (Pons Racing 40) completing the podium.

The Red Flag saw Miquel Pons (LCR E-Team) crash out and suffer contact from Marc Alcoba (Openbank Aspar Team), with the LCR rider conscious and getting a check up at the circuit before heading to local hospital in Groningen for a CT scan to his pelvis.

Before the flag was thrown, however, it was a five-wide run to the first corner when the action finally got underway, with patchy showers having twice delayed the start. Casadei came from fourth on the grid to lead the field into the first corner, while Aegerter fended off an early challenge from Matteo Ferrari (Felo Gresini MotoE) at Strubben, and then again at De Bult, to end the opening lap in second, with Granado just behind them.

The riders had no time to waste, with the delays seing the originally distance of eight laps cut to six, and Granado was a man on a mission. He passed Ferrari as they turned into Haarbocht at the start of Lap 2 although, in doing so, he made room for Pons to follow him. A brief battle between the LCR duo ensued before Granado shook off his teammate and attacked Aegerter.

Incredibly, as the rain flags flew again, Granado passed Aegerter around the outside of the high-speed Ramshoek left-hander, then went down the inside of Casadei when they arrived at Haarbocht again on Lap 3. Ferrari got back underneath Pons three corners further around at the Ossebroeken complex and, unfortunately, that was just the start of the LCR rider’s troubles.

Exiting the following corner, De Strubben, Pons highsided and was thrown from his motorcycle. Running two bikes back, Marc Alcoba was unable to avoid it and also crashed. Alcoba eventually remounted but, as Pons was initially attended to at the side of the track, the race was red flagged during Lap 4. Soon after news came through it would not restart, and instead half points would be awarded.

In the FIM Enel MotoE World Cup standings, Aegerter has now moved to 158 points, but Granado closes in slightly in second on 126.5 points, with Ferrari third but on 112.5. Action in the electric class resumes with the Motorrad Grand Prix von Österreich, at the Red Bull Ring – Spielberg on August 19-21!