“It was good. This morning I was struggling a lot on the brakes. I didn’t remember how hard these types of bikes brake. It was difficult on the first five laps, but then I started to enjoy it a lot. It was great to have that feeling on the bike. I feel good on this track, so I’m confident. My goal is to be on the front row, but we saw how tight the top 10 is today. The first row is my main goal, but if not, we’ll go for second row. I will be fighting for the victory. Looking at the pace, the long-lap penalty will make our life a bit more difficult, but I’m confident. We have to fight for a great race result here.” 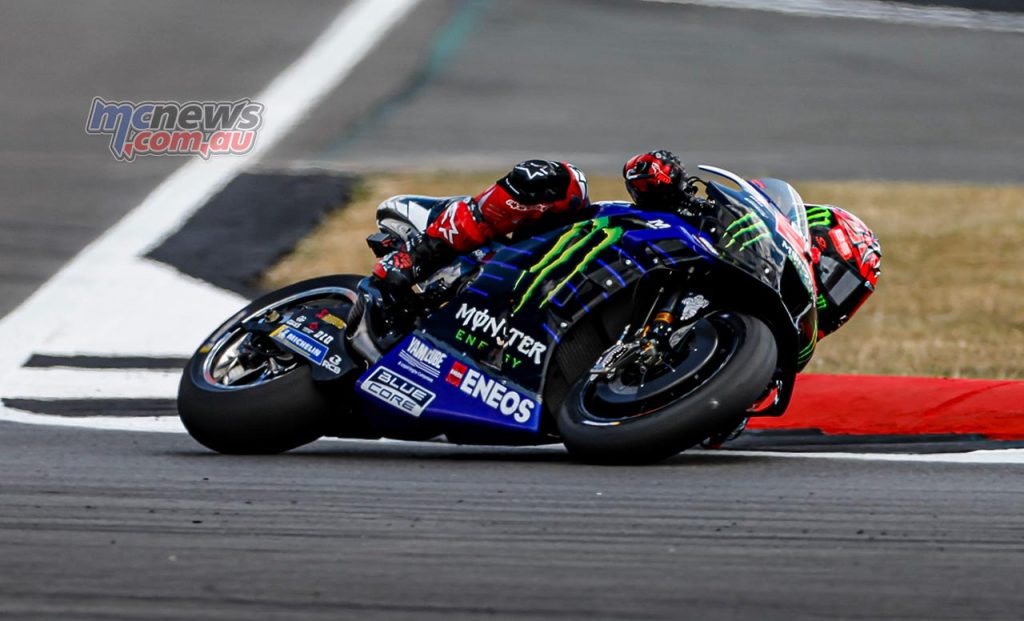 “It’s been a good start to the weekend, and I’ve enjoyed today. We’re working well, and although we weren’t in the positions we expected at the start of the season, we’re continuing to put a lot of effort in and it’s paying off. We want to continue improving, and I feel that we can do that. I’m not very familiar with Silverstone, but it’s a very fluid and flowing track which really suits our bike. I want to be in the top positions for every session, but let’s see what happens when we work on our race pace.”

“I arrived confident here in Silverstone, a track that I’ve always liked, and indeed, the weekend began extremely well! We worked hard throughout the first part of the season and we’re reaping the fruits of those labours now. I’m happy that I felt comfortable in the saddle straight away. From the very first laps, the sensations were good and we were able to do a good job, both in terms of race pace and on the time attack in the finale of the FP2 session. Now we just need to keep it up. We are well aware of how important qualifying is ahead of the race and the goal for tomorrow is to take a spot on one of the front two rows.”

“We got off on the right foot. I was only lacking a bit with the soft tyre but if we consider the gaps, we’re talking about thousandths of a second, so I’m not worried. The Aprilia is working well, as we expected, and along with Maverick, we did a good job that helped both of us. All that’s left now is to keep moving in this direction. The goal for qualifying is the front row, but it won’t be easy. There are a lot of extremely fast riders on this track.”

Miguel Oliveira (Red Bull KTM Factory Racing) next up in P6. The Portugese rider was sporting KTM’s extended exhaust and from the outside, it seems to be working a treat.

Oliveira was just a couple of tenths down on P1, as Rins picks up P7 after briefly sitting top. Enea Bastianini (Gresini Racing MotoGP).

“It was a very good day, coming back strong from the holidays. Today I was initially missing a fast lap, but then I tried the soft tyre in the middle of the session, partly to improve, but also to get the feel of how that compound could be for the race. As always, our bike is working well here, you can see that both myself and Joan are feeling strong. I think it will be a competitive weekend with some close results.”

“It was very exciting to be back aboard the bike today, I was really eager to do so and as a first day, I cannot complain. The first session will be needed to shake some rust off, but overall we went really well, especially in the afternoon’s time attack. There’s a lot to work on still, but we’re starting from a good base compared to how we finish the first part of the season. The new aerodynamics seem to be helping under braking, even though we have to go through the data before drawing conclusions.”

“I’m happy to be back on track with my Desmosedici GP finally. It was a positive first day, and I’m convinced I have a good pace for the race. Towards the end of FP2, I had a crash: the conditions were quite tricky because of the wind, I was too fast at that point, and I crashed. However, we managed to get back on track for a time attack and complete our plan for today. We are working on the basic setup and tyre wear to preserve them as much as possible for the race, which will be very long, with 20 laps planned. I’m confident we can do well tomorrow in qualifying.”

“Not a bad first day of work even if the start was more complicated than expected. I didn’t go badly in FP1, I was fast enough right for the green light and I really like the track riding the MotoGP. Then in the afternoon we managed to make another step forward: the Team did a great job and tomorrow we will continue to focus on the race pace to be ready for Sunday.”

Another key headline sees Francesco Bagnaia (Ducati Lenovo Team) outside the provisional Q2 places as it stands, the number 63 ending Friday in P11 despite a quick start to the day.  That means that Bagnaia, despite the Italian sitting second fastest after the opening Free Practice session, has work to do to try and gain an automatic Q2 place. The Italian is 11th heading into the all-important FP3 session on Saturday morning… although the skies look like they’ll stay dry.

“It was a good first day here at Silverstone, even though I crashed this morning after touching the white line. Unfortunately, in the crash, one of the two front soft tyres we had at our disposal got cut, so we preferred not to use the second one this afternoon, although that compromised my time attack a little. In any case, we started on the right foot: we still have a lot of work to do, but we are much further ahead than expected. I am convinced that tomorrow morning we will have the conditions to improve further and have a good qualifying”.

Remy Gardner ranks P22 at the end of Friday but is confident that he has margin to ride faster and will look to do so on Saturday.

“It was good to be back on the KTM RC16 today and it was a good day overall in Silverstone. We could have done a slightly better time in FP2 but in the end it was not possible as we did not manage to improve all the sectors in one same lap, but I feel like I am riding well. I am on the right track and we will look to go faster tomorrow. I really like this place, so I think that we can have a good weekend here.”

It was almost a two-man show in Moto2 on Friday at the Monster Energy British Grand Prix, with Augusto Fernandez (Red Bull KTM Ajo) and home hero Jake Dixon (GASGAS Aspar Team) duelling it out on the top of the timesheets in both sessions and in their own postcode. The Spaniard took it in the end to end Friday fastest, with Dixon 0.187 back before a 0.369 gap back to another impressive performance from Alonso Lopez (CAG Speed Up).e.

Aussie Moto3 rider Joel Kelso is missing this round as the recupertates from injury.