The paddock at the North West 200 woke on Wednesday morning to the dramatic news that Peter Hickman’s $160k (AUD) courtesy car had crashed heavily into a series of garden walls along the Station Road section of the course sometime around 2am that morning.

The all-green BMW M3 Competition had been presented to Hickman for him to use while at the races by event sponsor, JKC BMW on Monday and featured stickers brandishing his name and North West 200 logos. 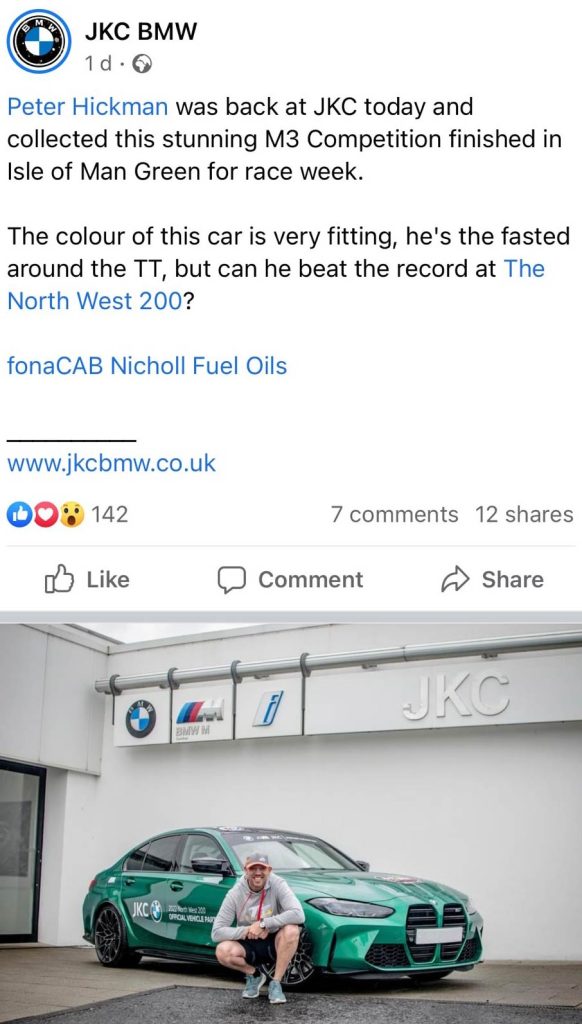 Photos circulating on social media showed the M3 abandoned on a footpath with the front of the car smashed in. 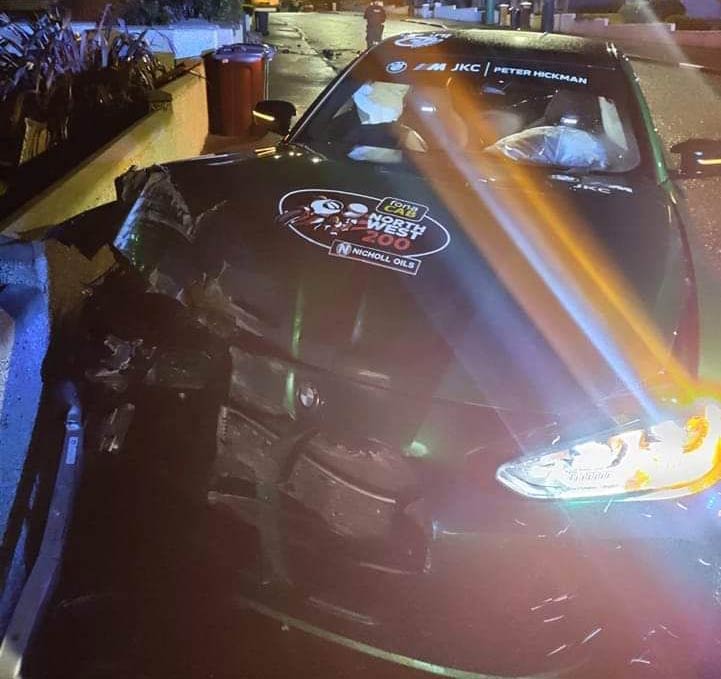 Of course this is hardly the first time where borrowed cars or hire cars have seen racers and race teams get into trouble….Plenty of our own Aussie talent over the years have gone dune jumping in hire cars to the point that they had to climb out of the windows as the frame and doors were so bent from the landings. Or a certain American that turned a car over trying to loop the loop through the Phillip Island tunnel that led those guardrails to be installed…  And a not long ago retired Aussie F1 driver also minced a couple of borrowed high end sports cars over the years on public roads…

The incident could be entirely innocent though, something like a rabid dropbear might have attacked the car and caused the accident….

Police made an appeal for information through Inspector O’Brien who said, “Officers attended the scene where it is believed that a green BMW M3 collided with walls outside a number of properties, causing extensive damage. Significant damage was also sustained by the vehicle.  When officers arrived, there was no-one in the car and at this stage, we are treating this as a hit-and-run road traffic collision’.”

Hickman’s FHO BMW team later issued this statement, “FHO Racing confirm that a vehicle driven by a team technical staff member, together with two other team technical staff passengers was involved in a road traffic collision in the Portstewart area in the early hours of this morning (Wednesday 11th May). No other vehicles were involved and no injuries were sustained by any of the occupants. The matter is being dealt with by police.”

The North West sees the FHO Racing BMW team make its road race debut and they had a tricky opening day on Tuesday that saw the TT lap record man fail to trouble the top of the time-sheets. This controversial incident is far from ideal preparation for final qualifying and the opening races on Thursday. All eyes will be on the Lincolnshire man when the action resumes late today (Thursday).