The official ‘Retro Round’ 6 of the 2022 Penrite ProMX Championship presented by AMX Superstores did not disappoint, as a technical and challenging Coffs Harbour race track gave riders and fans epic battles and on-track action all day long.

With mid week rain clearing to a beautiful day, riders had to navigate a rutted race track that kept them on their toes.

The opening THOR MX1 Moto showcased the battle many have been anticipating with a trademark Holeshot from the #111, HRC Honda Racing Australia’s Dean Ferris. Red Plate holder Aaron Tanti on the CDR Yamaha Monster Energy Yamaha was close in 2nd place from lap 1. From there it was go time, as the duo banged bars around the technical but fast Coffs Harbour track.

Behind the lead duo, Matt Moss on the BBR Yamaha 102 Motorsports crashed on lap 1 in 5th position and be clipped by another rider, ending the Moto for the fastest qualifier from this morning’s AMX Superstores Pole Shootout. 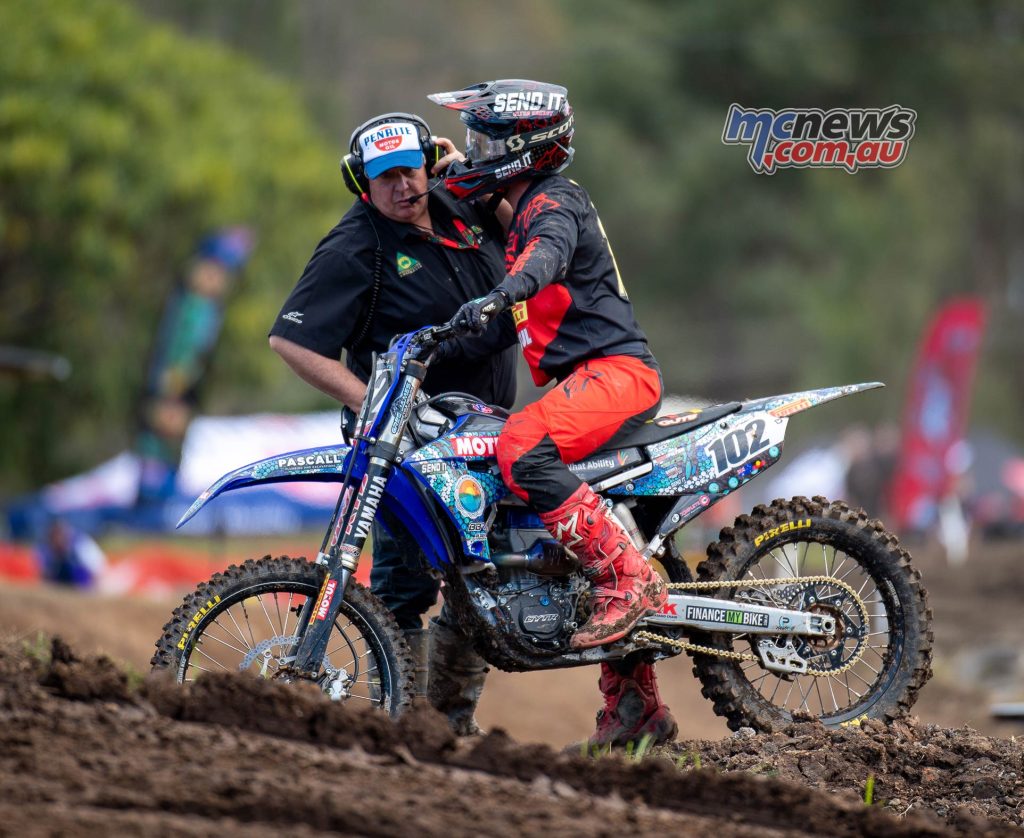 At the 5-minute mark Tanti pulled the trigger and passed Ferris for the lead. Brett Metcalfe on the GO 24 KTM then passed Todd Waters for 3rd position.

As the middle laps of the Moto ticked off, Ferris began to close back in on Tanti and with 2 laps to go made an aggressive pass to retake the lead. From here, things began to unravel for Tanti, the championship leader going down with 1 lap to go. As Tanti remounted, Metcalfe passed him for 2nd position.

KTM’s Kirk Gibbs had put in a monumental charge, going from 7th position on lap 1 to pass riders left, right and centre before taking Tanti for second on the final lap.

At the chequered flag it was Ferris in front to take the win, with Gibbs and Metcalfe rounding out the podium ahead of Aaron Tanti and Todd Waters.

A frantic first lap heralded the second and final MX1 moto of the day and it was moto one victor Dean Ferris with the Holeshot ahead of Aaron Tanti.

Ferris and Tanti battled throughout the opening lap before a mistake by the Honda man gave Tanti the room he needed to make a pass stick.

With a rapidly deteriorating race track, both Tanti and Ferris took several laps to find their flow and establish a race pace before the second half of the race saw things step up a notch.

Ferris began to inch up on Tanti as the race progressed and then pulled the trigger with 8 minutes to go with an aggressive inside line cutting off Tanti’s run in the ruts to the next corner.

Behind the leaders, Kirk Gibbs established 3rd position early and laid down consistent laps to solidify another podium finish.

GAS GAS Australia’s Hayden Mellross put on an inspired ride to charge through to 4th late in the Moto after battling with Todd Waters.

Dean Ferris took the chequered flag to make for a 1-1 day for the overall victory.

Third place for Kirk Gibbs was good enough to secure him second place for the round while Tanti’s second place in the final moto promoted him into third overall and the CDR Yamaha rider retains the red plate.

Riders were presented with a race track giving more lines, options and passing opportunities than they did for the first qualifying session when the gate dropped for the opening moto of the day for the Pirelli MX2 combatants.

Rhys Budd made his intentions clear early on, taking the Holeshot and establishing strong track position with a several bike length lead at the conclusion of the first lap.

Kaleb Barham took his momentum from Maitland into Coffs, running in 2nd place before droping to 3rd for half the race before a small mistake saw him pushed out of the top 5 late in the race.

Wilson Todd took a few laps to figure out the track before once again putting on a clinic of speed and precision, passing Budd for the lead on lap 4 and never looking back.

As Todd gapped the field, an incredible battle took shape between several contenders for the podium placings with KTM’s Nathan Crawford, Yamaha’s duo of Jesse Dobson and Bailey Malkiewicz and Kawasaki’s Haruki Yokoyama.

Crawford was the first to fall from the top 3 and Barham quickly followed suit a lap later. Malkiewicz later fell from contention in this same cluster of laps as the technical Coffs Harbour track claimed more victims.

Todd eventually cruised to victory. Budd in 2nd, Yokoyama in 3rd, with Crawford rebounding to 4th after his fall on his first gate drop since returning from pre season injury. Dobson rounded out the top five.

Pirelli MX2 Red Plate holder Wilson Todd took the Holeshot in the second and final MX2 bout of the day with Crawford close in tow. Todd proved too strong though, opening up a 5-second lead over the opening laps.

As the laps progressed, Dobson passed Rogers for 4th whilst the top 3 positions were solid all the way to the chequered flag. Todd taking his second victory of the day and the overall Round win.

Crawford took 2nd in the Moto, mounting a late race charge to Todd which saw him close in to a couple of bike lengths at the finish.

Cosford posted his first podium of the season in 3rd. Dobson and Rogers finished 4th and 5th respectively.

With another overall victory, Todd marches closer and closer to clinching the 2022 Pirelli MX2 Championship crown.

Jack Mather claimed the opening Holeshot and set his sights on clearing the track early in the race. KTM’s Connor Towill latched onto the back of Mather though and in an impressive display of speed, took the lead 5-minutes into the Moto in a pass around the outside of Mather.

KTM’s Ryan Alexanderson was on a mission, starting from outside the top 5 and systematically picking off each rider on his way to the front. With 5 minutes to go, Alexanderson made the move stick on Connor Towill to take the lead and then stretched his authority to take the win.

Towill 2nd with Byron Dennis on the podium after Mather crashed out of 3rd with only minutes remaining.

Moto 2 saw a repeat opening sequence with Mather taking the Holeshot from Connor Towill, however Towill wasted no time in mounting another attack on Mather, scrubbing past to the lead only 3 turns into the race. 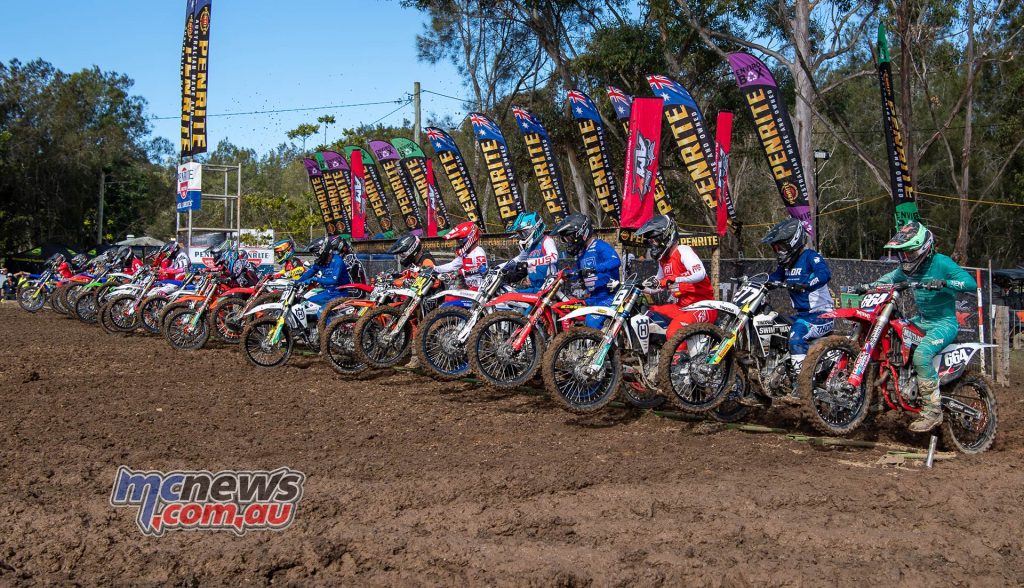 As Towill stretched a 3-second lead by the halfway mark, Husqvarna’s Brock Flynn moved past Mather and up into 2nd and kept Towill honest, eventually closing the gap to just a single second as the laps progressed.

With 5-minutes to go, Towill made a mistake which handed the lead to Flynn, whilst also bunching up the field at the front.

Ultimately Alexanderson was too strong and made it a double.

Flynn scored a solid 2nd position as Towill went down trying to make the pass for 2nd on the final lap. Mather claimed 3rd place, which gave him 2nd overall on the day.

Red Plate holder Kayden Minear posted a consistent day but away from his recent podium speed, posting 5-4 Moto scores, giving him 4th overall and keeping the Red Plate as he leaves Coffs Harbour.

The nostalgia and two-strokes of yesteryear were on display to the delight of race fans at Coffs Harbour.

In the opening moto it was Brenton Inglis on the Yamaha YZ250 from the early 90’s who briefly battled Paul Grant before checking out for the win.

A change of fortune in Moto 2 saw Inglis crash whilst leading the field into the first turn, taking a big impact and a DNF. Grant went on to dominate Moto 2 on his way to the chequered flag.

In the final Moto, Grant and Inglis battled early with Inglis eventually falling from contention, giving Grant his 2nd Moto victory of the day and the overall win.