Team HRC has been at the Misano World Circuit this week for another test session. Factory rider Iker Lecuona was out on track on both Tuesday and Wednesday, the hot and dry conditions in Italy allowing for uninterrupted work.

Having recently undergone surgery on his right hand, Xavi Vierge was unable to participate in the riding this week but was nevertheless in the garage with the team, keeping track of developments, watching some of the action trackside, and taking the time to analyse all the data together with his technicians. 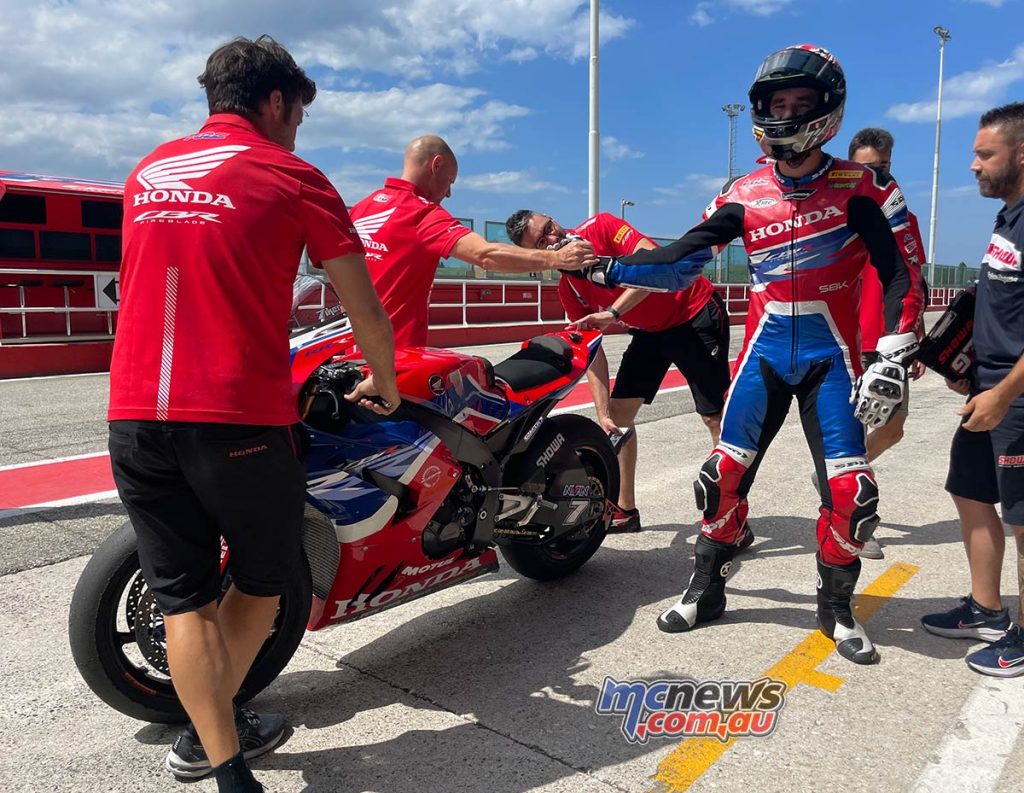 For this test, Iker was joined on track by factory HRC test rider Tetsuta Nagashima. The Japanese rider worked intensively alongside Lecuona over the two days of testing, something that he will do again over the weekend of 5-7 August, as part of the #33 Team HRC: along with BSB Honda rider Takumi Takahashi, Lecuona and Nagashima will compete in the iconic Suzuka 8 Hours endurance race with a factory bike based on the CBR1000RR-R Fireblade SP.

The two riders and their technical teams spent the sessions focusing largely on the electronics, geometries and balance of the bike, comparing different set-ups with those used at the recent Misano WorldSBK round.

Having completed all the work it had planned, Team HRC is pleased with the progress made during these sessions. The team will now continue its work back at base in preparation for round five of the Superbike World Championship, which will play out at the Donington Park circuit in the UK over the weekend of 15-17 July.

“After spending one day at Donington last week, which was very useful as I had the chance to experience this beautiful and fun, albeit very challenging track, we came here to Misano for two more days of testing, and I’m very pleased with how it’s gone. We worked our way through our test plan, and everything went smoothly, without any issues. The team did a very good job, Xavi was also here, with “Tetsu” Nagashima on the other side of the garage as well as quite a few Japanese engineers who came from the factory to see for themselves. Having Tetsu here was important because he is an official HRC test rider in Japan and was able to personally take part in the testing and share the track with me and other WorldSBK riders. It has been challenging in such hot and humid conditions, but we can be satisfied because I think we are continuing to improve. We completed two long runs and the feeling with the bike in the hot weather was pretty good, our race pace better compared to the recent round we had here. In general, I think we did a very good job over the two days. Now I feel a bit tired of course, but I’m happy and ready for the next step, with the Donington round coming up in a couple of weeks’ time.”

Mackenzie and McAMS Yamaha to wildcard at Donington

Reigning Bennetts British Superbike Champion Tarran Mackenzie will make his long-awaited WorldSBK debut in the fifth round of the FIM Superbike World Championship at Donington between 15-17 July.

Mackenzie, who stormed to emphatic success with the Yamaha R1 in the 2021 Bennetts British Superbike Championship with ten victories and 19 podium finishes, will race a World Superbike specification R1 for his McAMS Yamaha team as they make a one-off appearance on the world stage at their home event.

While the 26-year-old will have to quickly familiarise himself with the WorldSBK specification engine and Magneti Marelli electronics, the chassis of his BSB R1 is almost identical to that of the official WorldSBK teams and naturally, both Mackenzie and McAMS Yamaha have extensive experience of the Donington Park Grand Prix layout. The Leicestershire track is just ten minutes up the road from Mackenzie’s Ashby de la Zouche home and was the scene of one of his most commanding victories in the 2021 Showdown, which saw him carve through the pack to take the win.

Mackenzie was scheduled to make his WorldSBK debut in April at Assen, but a crash in pre-season testing saw him ruled out with a broken ankle, from which he has now fully recovered. He made his return to the British Championship in May and has been working his way up the order as he returns to full fitness.

WorldSBK/SSP/SSP300 Sunday wrap from Most

“I am very excited to finally make my debut in the Superbike World Championshop at Donington. It feels like it’s been a long time coming and I was obviously disappointed when we couldn’t do Assen. Donington is a special track for me as it’s only 10 minutes down the road from home, I’ve had some great success there in BSB so I am looking forward to getting out on a World Superbike-spec R1 and seeing what both myself and the McAMS Yamaha team can achieve. Obviously there is a lot to learn with the engine and electronics, but I know the chassis well as my BSB bike is very similar. The level in World Championship is really high and I’m looking forward to getting out on track and giving it our all. I have to say a huge thanks to Steve and the McAMS Yamaha team, as well as Andrea and everyone at Yamaha Racing for making this possible.”

The Aruba.it Racing – Ducati Team has announced a contract extension for Alvaro Bautista who will ride the official Ducati Panigale V4R machine again for the team in the 2023 WorldSBK season.

Bautista returned to the Aruba.it Racing – Ducati team at the start of the 2022 season. With four rounds out of twelve already held, the Spanish rider is currently leading the Superbike World Championship standings with 220 points.

“I have always believed in Alvaro from a sporting point of view and we have always had a very good personal relationship even when our paths temporarily parted. When we decided to bet on him again last summer, some people called this move a very risky gamble, but there was a conviction on both sides that we were making the right choice: results so far confirm our decision and make us happy. This is also the reason why we are glad to continue our relationship with Alvaro for at least another year.”

“I am very happy to be able to continue at least one more year with the Aruba.it Racing – Ducati Team, which represents a family to me. I have always felt good with this team and since I have returned, the feelings have been even more positive than in the 2019 season. When something works so well, we can only keep working, looking ahead. I feel I am still at the top, I feel I can still give a lot. Physically and mentally I think this is the best time of my career. I am also delighted to continue working with Ducati, a very important factory, tech-oriented, always looking for development: to be part of this project, of this team is something incredible on a personal level.”

Comprehensive WorldSBK/SSP/SSP300 wrap from Saturday at Most

Friday wrap from Most WorldSBK/SSP/SSP300