Lights on, Hi-Vis and SMIDSY

by Trev
in Motorcycle News, Uncategorized
A A
Share on FacebookShare on TwitterShare

Lights on, Hi-Vis and SMIDSY – By Phil Hall 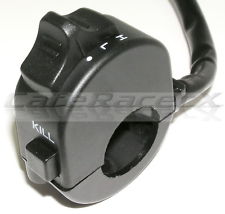 I wonder how many of my readers remember one of these?

Yes, it’s a motorcycle headlamp switch.  It allows you to select whether you want to have your headlight on or off as well as allowing you to toggle between high and low beam. Time was that every motorcycle has one, but you won’t find one fitted to a modern bike and, should you choose to fit one to your bike today (I’ll get to the reason why you might in a moment) you would be breaking the law by doing so.

Why so? Well, gentle reader, back in the dim, dark past, somebody got the brilliant (!) idea that the reason why so many motorcyclists were being killed and injured in motorcycle accidents was because other road users couldn’t see them. Fuelled by various road safety studies including the landmark Hurt Report (I always thought that the name was very apt) demands for improvement in this situation from within and without the motorcycle industry became louder and louder.

It didn’t take too long before some bright spark (!) came up with the theory that, if motorcycles had their headlights on while they were on the road, other road users would be able to see them better. After all, it was a practice for car drivers to turn their lights on at times when visibility was low, why wouldn’t it help other road users if motorcycles were more visible by having their lights on all the time?

Fast forward a little and various jurisdictions, jumping onto the road safety bandwagon, introduced legislation that required motorcycle riders to turn their headlights on while they were out on the street. “There you go,” the wise bureaucrats said, “The problem is solved. We have made motorcycling safer for riders and we can sleep soundly at night.”

Except that it didn’t quite work out like that, for all sorts of reasons. Firstly, and most significantly, motorcyclists of all manifestations, are a rebellious lot. Even mild-mannered Mr Joe Average who rode his CB175 to work because it was cheap, had, lurking inside his business suit and open face helmet, a trace of Marlon Brando, a quiet but determined feeling that he was somehow doing something daring, something anti the system, something “out there”.

“Damn them. If they want me to turn my headlights on just because they say so, I won’t. I’m not going to be dictated to by some faceless bureaucrat, I’m a motorcyclist.” Nowhere in the world did this anti-social feeling run deeper than in the USA. After all, you must understand that, at this time, the majority of states in the US didn’t even have compulsory helmet laws. This was the Home of the brave and the Land of the free.

Here in Oz, the introduction didn’t go smoothly either. Perhaps in no other country apart from America did the roots of anti-authoritarianism run deeper than in this convict-founded nation. There were huge public campaigns, rallies, stickers adorning bikes and deputations to governments at all levels. The MRA (Motorcycle Riders Association) and other lobbying bodies were mostly formed around this time and drew their support and their strength from ordinary motorcyclists who were damned if they were going to be told what to do.

So “requiring” motorcyclists to switch their headlights on while they were riding, even when backed up by a fairly rigorous campaign of police enforcement of the rule, didn’t really work.

Cutting through the crap when it comes to motorcycle crash statistics

But there were other problems, too. A lot of bikes back then (we’re talking early 70’s here, by the way) only had a six volt charging system. Running a bike with lights on while riding usually resulted in two problems. Firstly, the intensity of a six volt headlight was so weak that using it in daylight didn’t really have any positive benefit. The second problem was that doing so flattened the tiny battery and meant that the bike would not start again once you had stopped it. I well remember this being an issue with my MT125 Honda trail bike.

As well as this, most motorcycles back then were fitted with a headlight that used a normal, incandescent bulb. These were notoriously fragile and it soon emerged that, running them for extended periods, combined with the vibration to which they were subject from being mounted on a motorcycle, meant that they failed quickly and often. The legal issues associated with this phenomenon took a while to go away as well.

Perhaps the only tangible benefit (stick with me here) of the “Lights On” campaign was that manufacturers were forced to fit their bikes with more robust lighting systems. Perhaps here is another reason for the death of the British motorcycle industry?

Since time and experience showed that a “Lights On” campaign was not working and that motorcycle rider deaths and injuries were continuing to climb, the next step was obvious. When the citizenry would not comply with a “Please”, the governments replied with a “If you won’t do it voluntarily, we will MAKE you do it.”

So we come to today where, for the last 40 years or so, motorcycles are fitted with a high/low beam switch but no switch that allows the operator to turn the lights OFF. Mandating that lights HAD to be on at ALL times saw the manufacturers who wished to continue SELLING bikes in these jurisdictions , deleting the on/off switch altogether from their new models.

BUT, has the COMPULSORY “Lights On” campaign actually worked? Yes, motorcycle deaths and injuries are continuing to fall, but that is more of a consequence of improvements in inbuilt bike safety (ABS, traction control, better tyres, better brakes, etc, etc) and improvements in rider safety clothing. If you look back at the introduction of compulsory “Lights On” the initial results did look promising, but then the death and injury rate started to climb again. It is moot how much the lowering of the stats was due to the lights issue and how much of it was due to gradual safety improvements anyway.

My dad used to have a favourite analogy that aptly shows how the “Lights On” idea, though seemingly a good one at the time, was never going to work. He used to say that, if you put a frog in a saucepan of boiling water, the frog will hop out. BUT, if you put it in a saucepan of cold water and gradually heat it, the frog will stay in the pan until it is boiled to death. The concept is that it gradually accommodates itself to the increasing temperature and doesn’t realise that it is reaching fatal level until it is too late.

And so it was that, with advertising campaigns to reinforce the message, for a while motorists and other road users started noticing motorcycles. Why? Because they had their lights on and were more visible. But, after a while, because ALL motorcycles had their lights on, the initial novelty of it being so, started to fade and motorcycles started to become part of the background again. Did you get that? Yes, motorcycles started drifting into the background again. This was EXACTLY what the anti “Lights On” campaigners said would happen and they were sadly proven to be correct. Deaths and injuries started to climb again as the novelty of noticing motorcycles with headlights on wore off.

Fast forward to 2014. Deaths and injuries from motorcycle accidents are the lowest that they have been for years. Does this mean that “Lights On” has worked? No, far from it. These excellent results are as a result of the factors I have mentioned above and bear no relation to whether a motorcycle has its headlight on or not. In proportion to the overall deaths and injuries figures on Australian roads, motorcycling death and injury statistics are still alarmingly high.

Now, a little diversion for a moment. Stick with me here, it will become clear. How many of my readers are required to wear Hi-Vis clothing at work these days? It seems that, everywhere you look there is someone with a hideous green or yellow jacket on. I’ve been noticing it more and more. Proponents of Hi-Vis will tell me that that is a good thing. Making people more visible will keep them safer in the workplace. Why, my local motorcycle licensing authority makes all learner riders undergoing road testing wear a Hi-Vis vest over their riding gear so that they are more visible on the road.

The problem? The bureaucrats have fallen for the same simplistic trap that they fell for all those years ago. Making someone/something more visible only works for a little while. Once the novelty wears off and you’ve noticed it for a while, it starts to drift into the background because everyone is doing it and they become indistinguishable from the rest.

It should come as no surprise, then, to anyone who is a student of how governments and their bureaucracies work to know that the latest suggestion is that motorcyclists be required to wear Hi-Vis clothing when riding a bike on the road. “But it will make you more visible; it will reduce the number of accidents; it’s GOOD for you.”

My dad again. “The three greatest lies in the world are: Of course I’ll respect you in the morning: The cheque’s in the mail: We’re from the government and we’re here to help you.”

Of one thing you may be sure. The LAST thing a government, of whatever political persuasion, wants to do is help you. They want to make money out of you, they want to keep you under control and they want to get re-elected. And, to that end, they will do whatever is politically expedient, even pass totally unjust laws if they think the populace will find them palatable (witness the fiasco in Queensland at the moment).

We must resist the Hi-Vis agenda. History has proven that such measures only have a short-term benefit before the status quo returns. The only people they will benefit are the politicians who frame the stupid laws to start with, the bureaucrats who get rich from enforcing the laws and the careless motorists who will continue to use the SMIDSY (Sorry, Mate I Didn’t See You) defence.

None of these measures address the underlying problem of motorcycle deaths and injuries. Instead of EDUCATING road users to LOOK OUT for motorcycles (yes, I know this is starting to happen, and not before time), the motorcyclist is being faced with increasing impositions by governments to ensure their OWN safety while allowing other road users to continue to use the SMIDSY defence. The fact that a car hits you because the driver didn’t see you should NOT be seen to be your fault. If you were taking all reasonable care, then the careless motorists cannot hide behind SMIDSY.

“Lights On”? It didn’t work. Hi-Vis? It won’t work. SMIDSY? It is alive and well and showing no signs of going away anytime soon.