Wayne recently tested out Husqvarna’s 701 Enduro LR and came away highly impressed saying, “It actually really is a big enduro dirtbike rather than a little adventure bike and it’s epic” (full review link), for 2021 though the sad news is that the big-tank 701 Enduro LR is now being dropped from the line-up as a production model. The long range kit will continue to be available as a genuine accessory, but the 701 Enduro LR model itself will be no more.  For the 701 Enduro and 710 Supermoto models though Husky have added a swag of updates to the biggest single-cyclinder motorcycle you can buy.

Kicking off the list of new components is an LCD dash across both models, featuring an integrated gear indicator and rpm display.

Also new is the headlight unit which now incorporates the brake line routing behind the headlight, for a cleaner overall look and symmetrical lower panel.

Both Enduro and Supermoto models are also Euro5 compliant for 2021 with a new exhaust system.

One of Wayne’s gripes about the 2020 701 Enduro model has also been answered, where previously the ABS had to be turned off completely, the Off-road mode now disengages the rear ABS and reduces the amount of ABS intervention on the front. 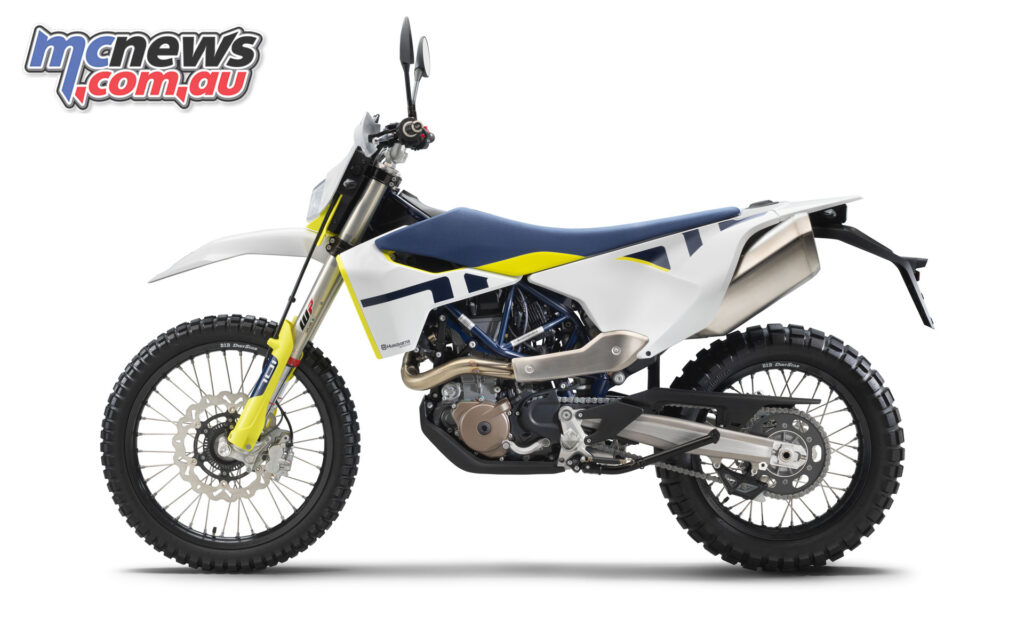 The 2021 Husqvarna 701 Enduro now deactivates rear ABS in Offroad modeA dongle was previously required to engage Off-road ABS mode, however this is no longer needed. Completing deactivating the ABS on both ends requires holding the ABS toggle for three-seconds.

As far as existing equipment, the 74 hp 692.7 cc single-cylinder remains, with ride-by-wire, electric start and 10,000 km service intervals. Torque is 73.5 Nm and there’s a slipper clutch.

The frame is a lightweight chromium-molybdenum steel trellis mated to an aluminium swingarm. The rear sub-frame includes the fuel tank and holds 13 L with a single-piece polyamide construction. The airbox is also accessible under the seat and triple-clamps are CNC machined.

Suspension on the Enduro is a set of WP Xplor 48 mm USD separate function forks, with compression in the left and rebound on the right, with 30 clicks of adjustment and 250 mm of wheel travel.

The rear features a WP XPLOR shock with rebound, as well as high and low speed compression, with rubber damping system and 250 mm travel.

Wheels are aluminium alloy D.I.D. rims with silver nippes, with the Enduro featuring a 21 inch front and 18 inch rear, clad in TKC 80 tyres.

The Supermoto runs a more road centric set of Xplor 48 mm USD separate function forks and shock, with 215 mm travel at the front and 240 mm at the rear.

The 2021 Husqvarna 701 Enduro and 701 Supermoto will be available from authorised Husqvarna Motorcycles Australia dealers from late March, 2021 onwards. Pricing for Australia has yet to be announced.

25-litre fuel cell kit for Husqvarna 701 arrives in May

Husqvarna sales increase 43 per cent in 2016

Massive gallery of images from AMA SX Round Four

So what exactly does it cost to run an ASBK homologated electronic package?