Alastair Seeley continued his record breaking ways at the 2017 Vauxhall International North West 200 as he smashed the Superstock lap record to claim his 18th victory on the famous Triangle circuit on his Tyco BMW.

The ‘Wee Wizard’ set a new mark of 122.898mph to win from Lee Johnston (East Coast Construction) and Dean Harrison (Silicone Engineering Kawasaki). Seeley has now won a race at the North West every year since his first victory in 2008. His Superstock race victory was the 25th win for TAS Racing team bosses Hector and Philip Neill but it wasn’t without its drama.

“I hit a false neutral on lap two at the roundabout after I got into the lead and had to run up over the grass and on to a footpath.” the 35 year old said. “I had to work my way back to the front and I thought I’d better not do anything silly on the last lap. Hopefully we can continue this form on Saturday for the massive crowds who are around the circuit.”

It was also a major consolation for the Carrickfergus rider after his retirement on lap two of the Supersport race with an engine problem earlier in the evening.

“It is fantastic to get our 25th NW200 win. This is what racing is all about and it is fitting that Alastair is the man who is bringing it to us.”

The high profile pairing of John McGuinness and Guy Martin on the new SP2 Fireblades did not take part in the Superstock race after McGuinness crashed during practice (Link). The TT legend was taken to hospital in Belfast where his broken tibia and fibia were plated, putting the 26-time TT winner’s 2017 TT campaign in serious doubt.  As is standard procedure following such an incident, the Honda Racing Fireblade SP2 was impounded by race organisers.  As the team was unable to inspect the machine and reach a conclusion about the most likely reason for the crash, the team opted to withdraw Guy Martin from that evening’s Superstock race.

Seeley had been fastest in Supersport practice but Martin Jessopp took advantage of the local man’s absence to win his first North West race on the Riders Motorcycles Triumph.

“I am lost for words.” the Yeovil man said. “I have been trying to win a race here for ten years and now I have done it. I tried to ride my own race and open a gap on the rest of the field.”

Jessopp won by 0.772 seconds from Ian Hutchinson on the McAMS Yamaha with James Hillier third on the JG Speedfit Kawasaki a further 1,2 seconds back.
It was the Triumph’s first win at the North West since 1970.

Jessopp didn’t have to wait long for his second North West win, taking victory in the final race of the evening, the Supertwins event on his Riders Motorcycles ER6 Kawasaki.

“I had pushed hard all race and was taking it a little bit easier on the last lap when I saw I had a six second lead on my board.” Jessop explained. But I looked back at the roundabout and saw Rutter behind me so I had to get my head down again.”

Rutter’s Kawasaki was built by Ryan Farquhar, who had been seriously injured in the same race twelve months ago, and it took a new lap record from Jessopp on the final circuit of 110.423mph to win by 0.8 seconds from Rutter with Ivan Lintin (Dafabet Devitt Kawasaki) third. 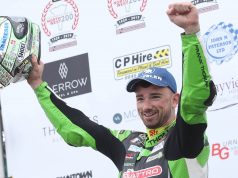 Glory for some despite shortened North West 200 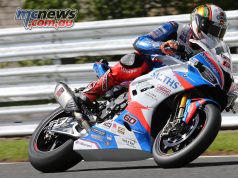 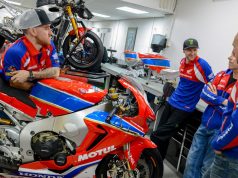 David Johnson joins Hutchy at Honda for TT and NW200