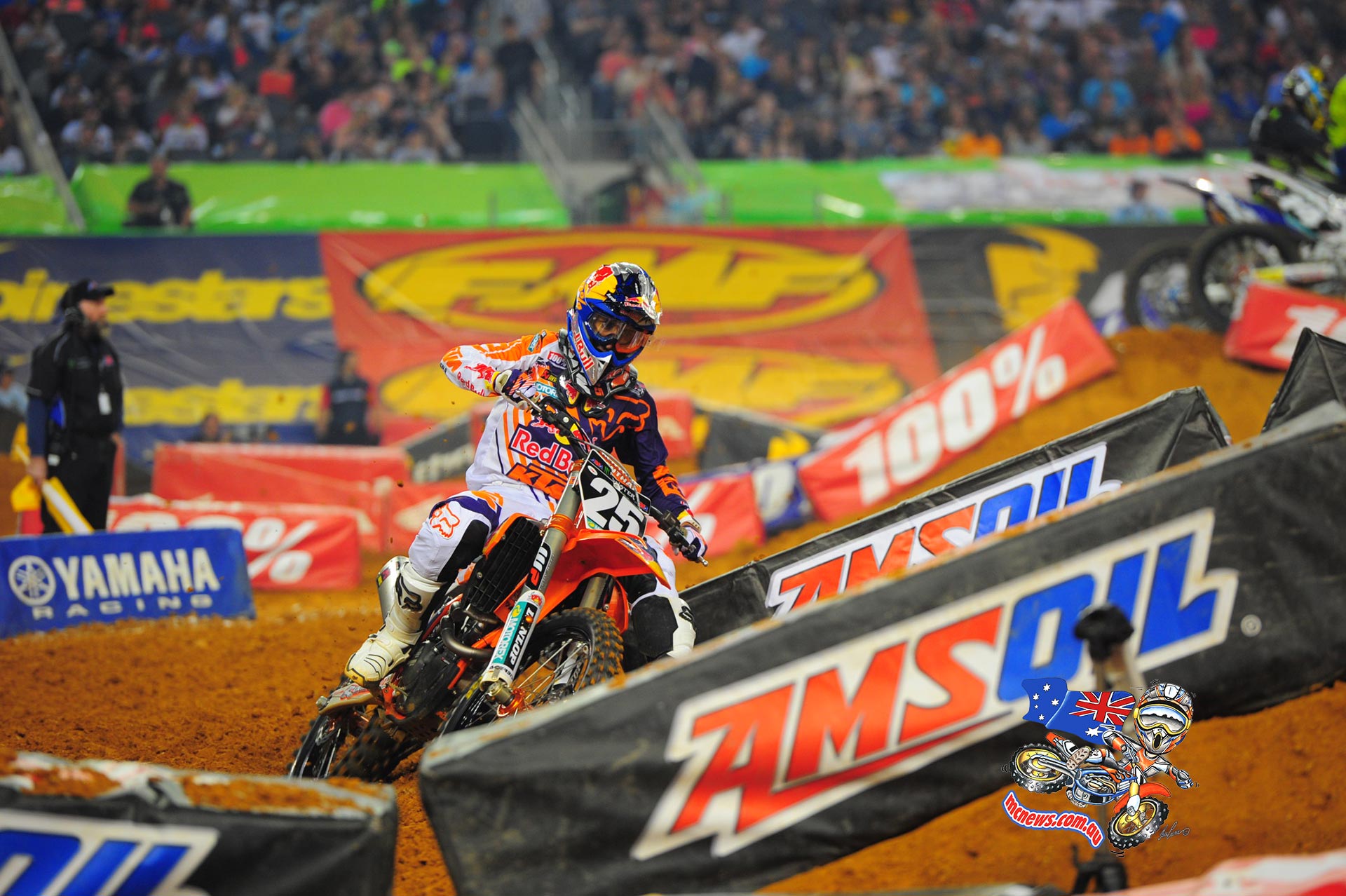 Monster Energy AMA Supercross hosted the seventh race of the 2015 season in front of 54,931 fans inside AT&T Stadium. It was a dominant night for Red Bull KTM, who not only grabbed the 450SX Class win with Ryan Dungey, his second of the year, but also the opening race of the Eastern Regional 250SX Class Championship with Marvin Musquin. Each rider led every lap of his respective Main Event, providing KTM with its third ever Main Event sweep in both classes.

Dungey led the field out of the gate in the 450SX Class Main Event to earn the SueprcrossLive.com Holeshot Award ahead of Monster Energy Kawasaki’s Davi Millsaps and Discount Tire Racing/TwoTwo Motorsports’ Josh Grant, who was quickly shuffled back. Dungey was quick to open a lead on the field ahead of Millsaps and Team Yoshimura Suzuki’s Blake Baggett, who moved into third, while Roczen was making his march to the front.

On Lap 1, Roczen passed Baggett for third and was quickly followed by Team Honda HRC’s Trey Canard, who won the previous race. Millsaps then came under from Roczen, who was able to make the pass and move into second on Lap 5. On the following lap, Millsaps crashed out of the race, allowing Canard to take over third. While Roczen initially closed on Dungey, the margin eventually grew as the laps wore on and the top three remained unchanged through to the finish.

Dungey became the third different two-time winner this season, joining Roczen and Canard, and moved into a tie with Jean-Michel Bayle for 13th on the all-time 450SX Class wins list with 16.

“Wins are important. You’re especially going to need them as we get towards the end of the season,” said Dungey. “We’re doing the best we can each week, putting ourselves in a good spot and we need to keep doing that. I got a good start tonight and was able to ride my own race.”

Dungey extended his lead in the 450SX Class standings to 12 points over Roczen, while Canard sits 23 points behind.

“It was tricky out there,” said Roczen. “I got off to a decent start and made a small mistake early, but I’m happy with a second place. It’s a long, hard season and the championship won’t come easy.”

Musquin extended his advantage over Bogle, who sat comfortably ahead of Rodriguez for third, until a crash by AG Motorsports/Gurrnaid Energy Honda’s Kyle Cunningham brought out a red flag on Lap 8. Since the 15-lap race was past its halfway point, the restart featured a staggered lineup of riders across the start straight. When racing resumed, Musquin opened up the lead again and Bogle reasserted his control on second. The battle for third, however, intensified as Rodriguez received pressure from both Monster Energy/Pro Circuit/Kawasaki’s Joey Savatgy and his Star Racing Yamaha teammate Jeremy Martin. The riders went three wide in the whoops with Savatgy emerging from the battle with the position.

Musquin took his fifth career Main Event win, multiple seconds ahead of Bogle, while Savatgy fended off the late challenges of Martin to claim his first career podium in third.

“I had a great start then I just did my laps and kept doing what I had to do,” said Musquin, who missed all of last season with an injury. “Just being consistent is what it’s going to take and that’s what I’ve been preparing for. I’m just happy to get it [a win] done this early, be here feeling good and healthy, and starting out strong.”

In her attempt to become the first female ever to qualify for a Monster Energy Supercross race, Vicki Golden came up short tonight at AT&T Stadium. She will continue to follow her dream next weekend in Atlanta at the Georgia Dome.

“Today was good and bad,” said Golden. “Unfortunately, I did not qualify, but all week, I have been saying that if I don’t qualify, I want to be as close as possible. We did that at least today. I felt good on the track today, and I just need to be loose on the track. I am going to make the most of this week and come back strong next week for Atlanta. Thanks for everyone’s support.”

Monster Energy Supercross continues next weekend with its eighth stop of the 17-race season and the first of back-to-back races from Atlanta’s Georgia Dome.