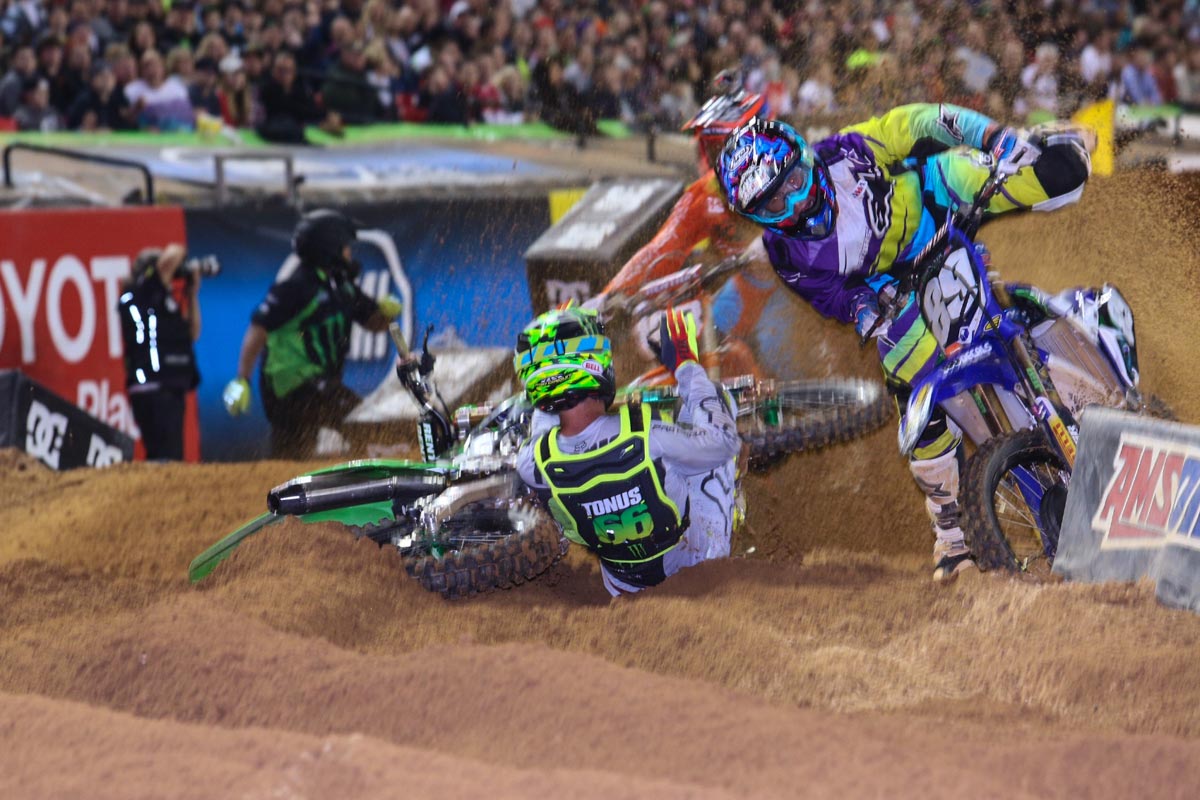 On a night when the stars of NASCAR were on hand to support Monster Energy AMA Supercross defending 450SX Class Champion and Red Bull KTM rider Ryan Dungey raced to his fifth win of the season in front of 61,683 at the Georgia Dome following a last-lap pass. In the opening race of the Eastern Regional 250SX Class Championship, Rockstar Energy Husqvarna Factory Racing’s Martin Davalos captured his first win since the 2014 season.

Musquin was able to make the pass on Brayton to lead the first lap and quickly opened a gap. On the ensuing lap, Dungey made an impressive climb to second, passing three riders. Brayton held onto third for a lap before giving way to Reed. The Red Bull KTM duo of Musquin and Dungey set a torrid pace out front, but Reed kept them in his sights. The lead trio consistently pulled away from the field over the course of the next handful of laps before Musquin and Dungey made it a two-rider battle for the win.

Dungey was able to close in on his teammate in several places, but the French rookie would pull back away. This continued until the final lap when Musquin approached Team Yoshimura Suzuki’s James Stewart to put him a lap down. After one of the whoop sections Stewart forced Musquin to change his line into a corner, allowing Dungey to gain the momentum to get alongside both riders. Musquin then bobbled and lost control of his motorcycle, allowing Dungey to make the pass. Musquin then went off the track but stayed upright, losing no additional positions.

Dungey took the checkered flag just over four seconds ahead of Musquin, with Reed third. It was Dungey’s fifth win in eight races and his third inside the Georgia Dome. It signified KTM’s first-ever 1-2 finish with Dungey and Musquin, and was the manufacturer’s first since the opening race of the 2014 season.

“I was wanting to make the pass happen, but Marvin [Musquin] was setting the pace out front. A really good one,” said Dungey, who now has a 24-race podium streak that dates back to last season. “I lost some ground and then would gain on him. It kept going like that. Unfortunately we [almost] got together there at the end, but that’s racing. He’s [still] a winner tonight. To run like that like as a rookie is impressive.”

Musquin’s runner-up finish was the best of his career and was also his second podium result this season. He also led his first ever laps in a 450SX Class Main Event.

“I’m happy and disappointed right now. This is my best finish in the 450SX Class and I was pushing hard, but I really wanted to get the win. I’m happy for the Red Bull KTM team to go first and second.”

Dungey extended his lead in the 450SX Class standings to 33 points over RCH Soaring Eagle/Jimmy Johns/Suzuki Factory Racing’s Ken Roczen, who had won two of the last three races heading into Atlanta but finished sixth following a 16th-place start. Anderson, who finished seventh, is third, 46 points out of the lead.

In the first Eastern Regional 250SX Class Main Event of the 2016 season, Troy Lee Designs/Red Bull/KTM’s Shane McElrath earned the SupercrossLive.com Holeshot Award but then went off the track and dropped to the tail end of the field. That allowed Davalos to assume the lead, with Pacific Coast Customs/The Viewing Yamaha’s Darryn Durham in second and GEICO Honda’s Malcolm Stewart third.

While Davalos sprinted to an early lead, Stewart passed Durham to take over second on Lap 1. Two laps later Durham lost another position to Monster Energy/Pro Circuit/Kawasaki’s Tyler Bowers, who started fourth. On Lap 6, Yamalube/Star Racing Yamaha’s Aaron Plessinger passed Bowers, overcoming a ninth-place start to move into podium position. Out front Davalos enjoyed a comfortable lead that grew even larger when Stewart crashed into a downed rider on Lap 7, maintaining his possession of second despite the misfortune.

Davalos lost ground in the closing laps as he navigated through lapped riders but still took the win just over a second ahead of Stewart. Plessinger finished third for his second career podium result. It was Davalos’ first win since St. Louis during the 2014 season and it signified Husqvarna’s first 250SX Class win since Houston all the way back in 2001.

“The last year and a half has been really tough for me,” said Davalos, who suffered a serious injury during the 2014 season. “I’m just happy to be out there. I got a good start and I was able to just log in 15 solid laps. It got a little hectic towards the end with lappers, but I’m so happy to finally be back up here [on the podium].”

With the opening race win Davalos now has a three-point lead over Stewart in the Eastern Regional standings. Plessinger is third, five point back.

Monster Energy Supercross will travel to Daytona Beach, Florida, next Saturday, March 5, for the ninth race of the season from Daytona International Speedway.