Celestino Vietti (Mooney VR46 Racing Team) marches on in style in the 2022 Moto2 World Championship, putting in another stellar performance in Argentina for win number two of the season. Idemitsu Honda Team Asia celebrated a double podium as Somkiat Chantra took back to back rostrum finishes, this time in second, and Ai Ogura fended off Aron Canet (Flexbox HP40) on the final lap to finish P3. It’s the first time two former Idemitsu Asia Talent Cup riders have shared the intermediate class podium. Pole-sitter Fermin Aldeguer (MB Conveyors Speed Up) crashed out after contact with Vietti at Turn 13, deemed a racing incident.

Polesitter Aldeguer got away the best, but alongside him, Augusto Fernandez (Red Bull KTM Ajo) was more sluggish. A bad start then turned into a disastrous start for the number 37, as he made some contact with Ogura’s rear wheel at Turn 1 and crashed out of contention. Vietti made a great start from the third row to move up, the only rider keeping tabs on Aldeguer in the opening exchanges.

At Turn 1 on Lap 4, Vietti then carved past Aldeguer to take the lead. Chantra was holding third, the Thai rider a second away from Aldeguer’s rear wheel, as Canet also made great progress to climb up to P4.

Vietti, Aldeguer and Chantra seemed to be holding station. But with 16 to go, drama struck. Vietti was slightly wide at Turn 13 and sniffing an opportunity, Aldeguer stuck his front wheel up the inside. The two came together and the rider coming off worse was Alduguer, who was up on his feet but out of the race.

Up ahead, Vietti also now had his hands full with Chantra. Canet was P3 but over a second off second, with Ogura keeping tabs on the Spaniard in P4 – and the Japanese rider was the fastest rider in the lead group. For a second time, Vietti was then wide at Turn 13, and this time it did allow Chantra to come through and take the lead. On the following lap though, Chantra was wide at the same corner, putting Vietti back in charge.

Chantra stayed settled in behind Vietti for a number of laps then, with the action shifting to behind between Ogura and Canet. The battle allowed Vietti and Chantra sail 1.7s up the road from the duo, and with five laps to go, it looked like it was Vietti vs Chantra for victory.

With just over two laps to go, Vietti pulled the pin and the gap went up over a second heading onto the last lap. Chantra, in turn, was 3.8s clear of teammate Ogura, but the Japanese rider was absolutely not clear of Canet. With a place on the podium up for grabs, the Spaniard was swarming all over the back of him and lunged at Turn 5. Canet was wide though, allowing Ogura back through, but the Spaniard then tried again at Turn 7 and managed to hold it around the outside of Turn 8.

As it already had in plenty Moto3 battles, it would come down to the penultimate corner. As Vietti sailed over the finish line for win two from three and Chantra secured his first back to back podiums, Ogura shot up the inside of Canet with a classic harsh but clean move, and the Honda Team Asia rider kept it pinned to the line to make it the first time two former ATC riders have shared the podium in the intermediate class.

Riders reflect on opening day of practice at Assen

Vietti extends his Championship lead to 21 points over Canet after taking 70 points from a possible 75 – and COTA now awaits. The two had been the most consistent until Chantra shot to the top in Lombok… with Texas shuffle the cards once more? We’ll find out next weekend!

“A tough, difficult race and a really strange grip condition. We used the hard for the first time on the long run, we battled a lot with overtaking and counter-overtaking and maybe I even made some small mistakes but it was fun today. The Team did a race against time for getting ready in just a few hours. Compared to last year, I am able to understand the bike better, where to work and what changes to make. I’m happy with the points in the championship and with the leadership: we don’t have to think too much about it, just take full advantage of all possible opportunities.”

“The race is done here in Argentina – it was quite a difficult one to be honest. I made a mistake and lost two seconds on the first lap, and then I battled back from a long way to finish fifth. I caught up to the top three podium battle in the last corner. Another couple of laps and I think I could have done even more. It’s all getting closer now in terms of our performance – and I think it’s only a matter of time now before we can be up where we want to be. Looking ahead to America – it’s a track I really like. Last year I was really fast there, and I have a better bike now this year – so I’m expecting big things. I think we could go all the way!”

As last laps go, Argentina was pretty special from Sergio Garcia (Solunion GASGAS Aspar Team). The now-Championship leader went from third to first and attacked Dennis Foggia (Leopard Racing) with some penultimate corner poetry to take his first win of the season. The Italian was quick to congratulate the move despite being forced to settle for second, once more banking some serious points as he and Garcia pull clear at the top. Ayumu Sasaki (Sterilgarda Husqvarna Max) went from front row to podium despite a Long Lap penalty the Japanese rider had to serve from Indonesia, finally putting some bad luck to bed.

It was a perfect getaway from pole for Garcia, who comfortably led into Turn 1, but a slower start for teammate Izan Guevara on the outside of the front row. However, despite dropping to P5 on the opening lap, Guevara expertly picked his way back through and on Lap 2 at Turn 5, took the lead from Garcia. The two GASGAS riders immediately started stretching clear as second on the grid Sasaki took his Long Lap Penalty. 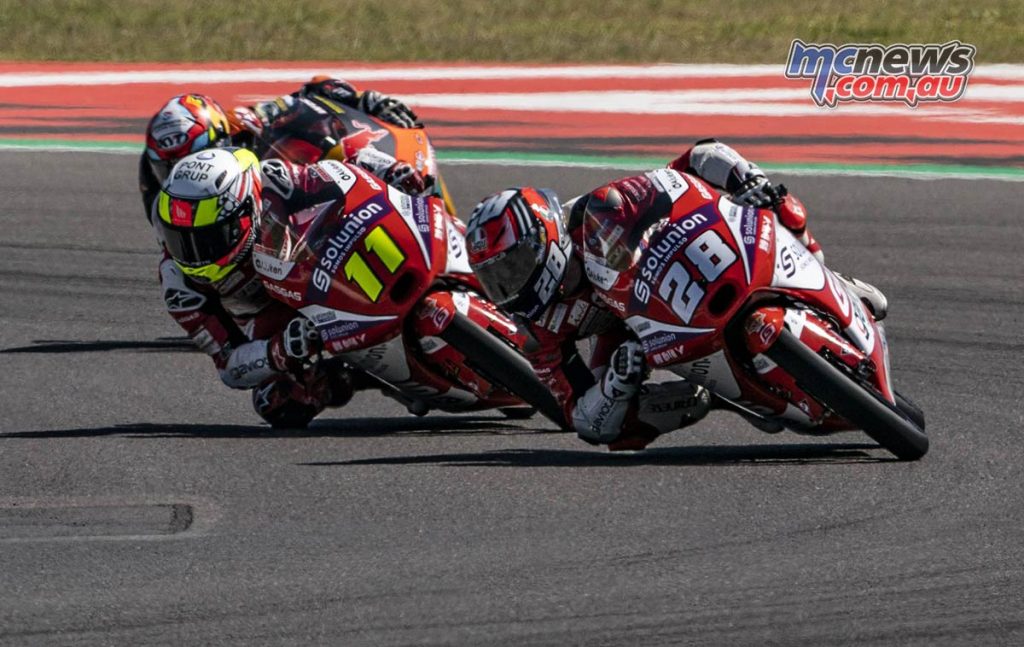 Jaume Masia (Red Bull KTM Ajo) set the fastest lap of the race on Lap 3 and had climbed from outside the top 10 into the top three, but with plenty of squabbling going on, the GASGAS leading duo were nearly a second up the road. By 14 laps to go though, Masia had bridged the gap and had Andrea Migno (Rivacold Snipers Team) in tow.

A leading quintet of Guevara, Garcia, Masia, Migno and Diogo Moreira (MT Helmets – MSI) held station at the front, but drama then unfolded for race leader Guevara. At Turn 3 with 12 laps to go, the sophomore’s machine said no more and through no fault of his own, Guevara was out of the race, dropping down the Championship standings in the process.

Meanwhile, Dennis Foggia (Leopard Racing) had made his way up to P5 from a tougher qualifying, and on Lap 11 of 21, the Italian snapped up a two-for-one deal at Turn 13 – Moreira and Masia dispatched, Foggia was now P3 and in the hunt for the win.

Turn 13 then staged arguably the biggest drama of the race. Trying to go through a door that wasn’t fully open, Migno collided with Masia and both were down with just over five laps to go. That left Garcia leading Leopard duo Foggia and Tatsuki Suzuki by half a second, with Riccardo Rossi (SIC58 Squadra Corse) and Sasaki in the top five, the latter after clawing his way back from outside the points.

With two to go, Foggia was closing in on Garcia. Half a second became 0.2s in a couple of laps and at Turn 12, Foggia led. The Italian kept the lead onto the final lap from Garcia, with Suzuki, Sasaki and Rossi in the top five, but Garcia then found himself in the firing line as Suzuki sliced past to make it a Leopard 1-2. The Spaniard was able to respond, however, replying at Turn 9 and then locking on to Foggia just ahead. Was there time to line up a move?

There was. The number 11’s burgeoning reputation as a rider who will always go full send on Sunday – and within the limit – has been well-earned and Argentina would prove no different. Slicing up the inside at the final corner, the GASGAS rider got it done, kept it, and gassed it to the line for victory with Foggia hot on his heels.

“It was a really difficult race for me, because at the beginning my feeling with the bike could have been better. I worked to improve my pace lap by lap; and the last laps of the race were really incredible. The feeling was really good in the last corners. In the final corners I closed my eyes and said to myself: I have to try it. To get this win here is amazing… I’m really happy! I want to say thank you to all my family, who always support me, and all my team who have been incredible also.”

“I’m happy I could finish on the podium. I knew I had the pace even though I had to do a Long Lap penalty. I lost just two seconds and then just focussed. In the last five laps I struggled with grip that cost me in the fight for the win. The first two races have been difficult but we are strong and I’m happy to be back.”

Just behind them, Sasaki dived up the inside of Suzuki too and made that stick, back on the podium despite a Long Lap to turn proven speed in 2022 into points. Suzuki, for his part, was given a drop one position penalty for track limits on the last lap too – so he’s classified fifth as Rossi takes P4.

Impressive rookie Moreira continued to earn that moniker as the Brazilian took P6, just ahead of a big step forward for 2021 FIM JuniorGP Champion Daniel Holgado (Red Bull KTM Ajo) as he gets back to full fitness after injury struggles in pre-season. Carlos Tatay (CFMoto Racing PrüstelGP), Kaito Toba (CIP Green Power) and his Aussie team-mate Joel Kelso rounded out the top 10.

Argentina marked somewhat of a breakthrough weekend for Kelso.  The Darwin based teenager led the majority of the final qualifying session but was pipped in the dying seconds of the session to qualify fifth.  Kelso then backed his impressive qualifying performance up in the race with a tenth place finish, after running as high as eighth through the middle stages of the race. However, Kelso was one of only four riders to record a 1m48s lap during the race. Kelso’s fastest lap on lap seven, a 1m48.993s, was only 0.159s off the fastest lap of the race, which was a 1m48.834s recorded by Andrea Migno on lap five.  Kelso scored six-points from his tenth place finish which adds to the point he picked up in the Qatar season opener to currently place him 18th in the championship.

“This weekend was not so easy for us. We struggled in FP1 and FP2. We managed to find a way to make a good qualifying, which was really positive to be starting from fifth position for the race. Honestly, we had higher hopes. We thought we could do better in the race today, but that is racing in Moto3. We’ll keep working for the next one. Thanks to all the team and to all the sponsors for the support.”

High-res images from the 2022 German GP at Sachsenring