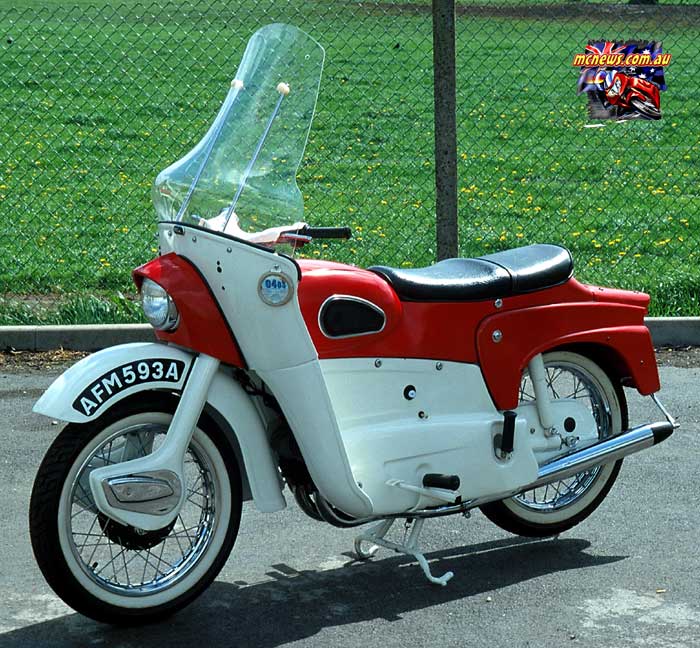 If the Japanese launched the Ariel Leader today, with a modern four-stroke engine, it would be considered to be a stunningly creative and radical design. In 1954, when Ariel’s Chief Designer Val Page was drawing the Leader, the bike was almost science fiction.

Valentine Page is arguably Britain’s greatest motorcycle designer but the Leader was undoubtedly his masterpiece. He tore up the rulebook for two-wheelers and produced an elegant, effective and easily manufactured tourer which was flawless in its execution, appearance and effectiveness.

The neat, 250cc two-stroke engine was hung from a rigid beam frame made from two simple pressings. Cheap and easy to make, it gave excellent handling and also contained the fuel tank which was then in the optimum position for sweet handling.

Although a gifted free-thinker, Page was an eminently practical designer. Therefore the trailing link front forks were on the Leader not for effect but because they provided low tyre wear and predictable handling. Like the fully enclosed chain case, and elegant built in fairing, Page intended every aspect of the Leader to be practical.

For its time, the inclined two-stroke motor was a masterpiece of efficiency. At 70mph, top speed was comparable with 250cc sports bikes of the day whilst fuel consumption was miserly. Cruising at 60 mph, 70mpg was possible.

The dummy petrol tank between the rider’s knees provided space for a luggage compartment whilst streamlined panniers, a luggage rack and even height adjustable lights made the Leader 50 years ahead of its time.

But best of all, a Leader felt like an elegant, sophisticated ride and several worlds away from the dull, porcine products being offered by Ariel’s owners, BSA, and the even more turgid 250s sold by Matchless.

The final cherry on the cake was that the Leader enjoyed the lowest warranty claims of any BSA group product. It was a simple bike to build and, with the most cursory maintenance, would run forever.

Practical, reliable, with excellent handling and good looks the Leader should have been the star of the British motorcycle industry. But there was one factor which would eventually kill the bike: the Americans hated it.

In the critical US market, the Leader looked strange and its all weather capabilities were wasted on a market which saw motorcycles as purely recreational vehicles to be ridden primarily in summer.

Attempts were made to get the most out of the expensive tooling with naked versions of the Leader, in the form of the Arrow and Sports Arrow, but still the Americans refused to buy a bike which had strange front forks and appeared to have no frame.

Well after he should have retired, Page had one last fling with the Ariel. He designed a typically neat 400cc straight four engine, with shaft drive, which was intended to power a new military bike. The new engine fitted the Leader like a glove and now Ariel had a true super tourer which would have captured a huge amount of BMW sales. But a cash strapped government cancelled the new military bike and with it died Page’s engine and what could have been a truly revolutionary bike.