More than five classes provided an entertaining day of qualifying and racing for Round 6, the final instalment of the Yamaha Motor Finance Australian Superbike Championship presented by Motul Pirelli which is being held at Winton this weekend.

Over two qualifying sessions and one race, the speeds from all competitors increased, and with a dry track for racing this afternoon the battles were heated as the stakes became higher, with championships on the line.

Competitors in the Akrapovic Production, Honda Moto3/125GP, YMF R3 Cup, Hartwell stars of Tomorrow, and GP Juniors classes all pushing their bikes to the limit before another two races take place tomorrow.

Competitors had nothing to lose and everything to gain this morning as the Akrapovic Production bikes were first to head out on track for one of two qualifying sessions today. 20 minutes on the clock saw Bikebiz’s Sam Condon brave the wet conditions and pull a quick lap time of 1:47.709, putting himself in a good position for Qualifying 2 (Q2). With a dry line forming in the second session, Ipone’s Reid Battye was untouchable in times posting a 1:37.277 lap time, securing pole for race one this afternoon.

A stacked grid of 24 Akrapovic Production riders headed to the grid this afternoon for their first race of the weekend. Despite sitting in pole position for the race start Battye slotted in to second behind race leader Cube Racing’s Tom Toparis when racing got underway. Closely following the pair in third was Condon, as they made their way around Winton Motor Raceway to commence their second lap.

The top three battle was tight as continued pressure was applied to Toparis from second and third placed riders, Battye and Condon. Battye made many attempts to put his front wheel in front of Toparis’, but young Toparis held him off with only four laps remaining. Fourth position remained occupied by YRD’s Callum Alderson who was racing a solo battle, while a battle for fifth, sixth and seventh played out behind him. Race Centre’s Drew Sells had clawed his way to fifth position relegating both 2 Thugs Customs’ Brandon Demmery and JDR Racing’s Jack Dawes to sixth and seventh.

With one lap to go, Battye, who had been fighting all race to take the number one position from Toparis, finally made a move stick, relegating him to second as they headed into the final corners of race one.

And at the wave of the chequered flag, positions remained the same, with Up to 300 Production’s Battye collecting the race one victory over second placed Toparis. Condon finished the race in a comfortable third position, while Alderson tailed it solo to cross the line in fourth but taking first spot in the Over 300 Production category.

Demmery locked in fifth position for race one while Sells, who was unable to redeem any positions crossed the line in sixth. Sells was followed by Dawes, Aiden Hayes, Peter Stevens Motorcycles Ty Lynch and Jack Passfield in seventh, eighth, ninth and tenth respectively. 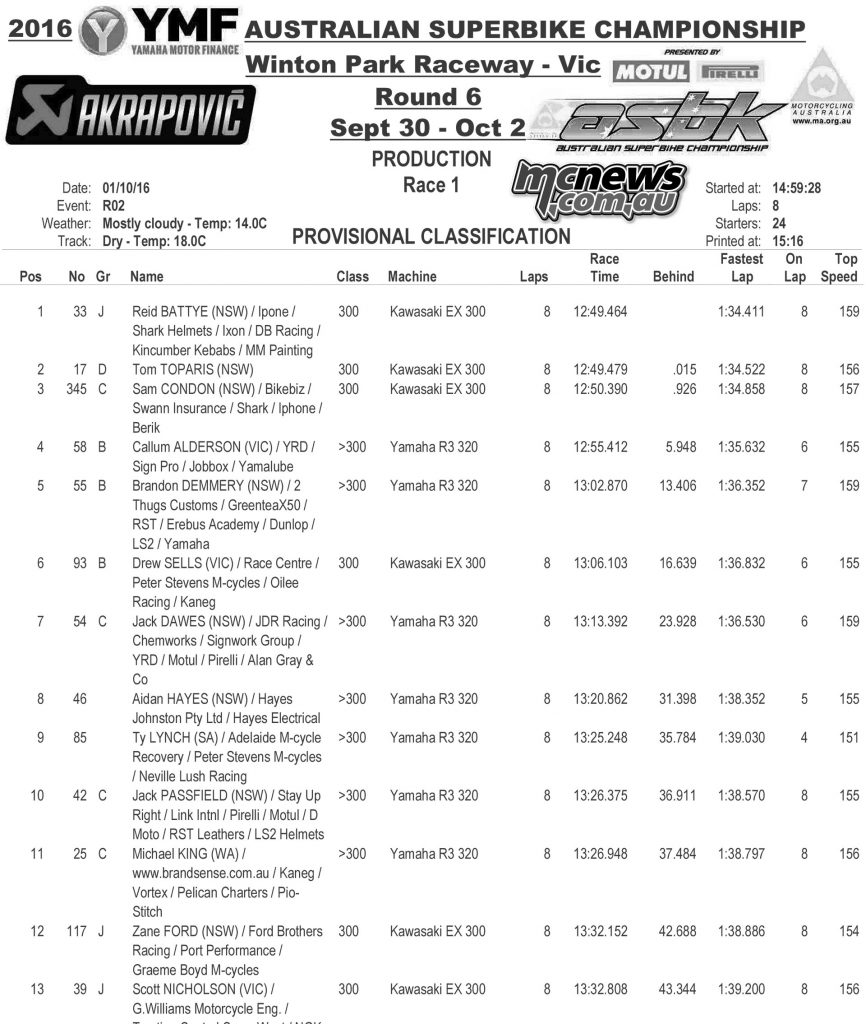 There was no denying the competitive edge in the air as the Honda Moto3/125GP competitors hit the cold 11.7-degree track for qualifying one today. It looked to have been yesterday’s fastest Suus Customs Matt Barton who would secure the fastest lap, but as tyres warmed the pace dropped, and it was LTR Racing’s Locky Taylor who secured the quickest time of 1:51.421. A drying track was just what these competitors wanted for qualifying two. Making use of the dry line was Tayla Relph securing pole position with a time of 1:36.870, before suffering a crash towards the end of the session.

When race one kicked off for the Honda Moto3/125 GP class this afternoon, Dylan Whitside got a phenomenal jump of the start to lead for the majority of the first lap from Tayla Relph and Brian Houghton, but as they headed to the final corner of lap one Houghton found the speed to take the lead, lengthening his gap down the straight.

Houghton first, Whiteside second, and Relph in third, were the standings at the start of lap two but making use of the slip stream over Relph was Taylor on the back straight which relegated her to fourth. Suus Customs Matt Barton, was pushed wide on the first corner of the first lap leaving him to play catch up for race one in fifth position.

Houghton had extended his lead to four seconds by the half way mark in the race leaving the battle on track to Whiteside and Taylor for second and third. And with three laps to go Taylor had marginally closed the gap, stealing second place on the front straight of Winton Motor Raceway.

At the show of the last lap board, change had happened with Whiteside once again taking his second place back, and at the wave of the chequered flag, positions remained unchanged. Houghton was victorious across the finish line over five seconds in front. Whiteside finished second, however a tyre technicality saw him disqualified at the conclusion of the race, which handed second to Taylor, while Relph claimed third. Barton retired from the race in the early stages. 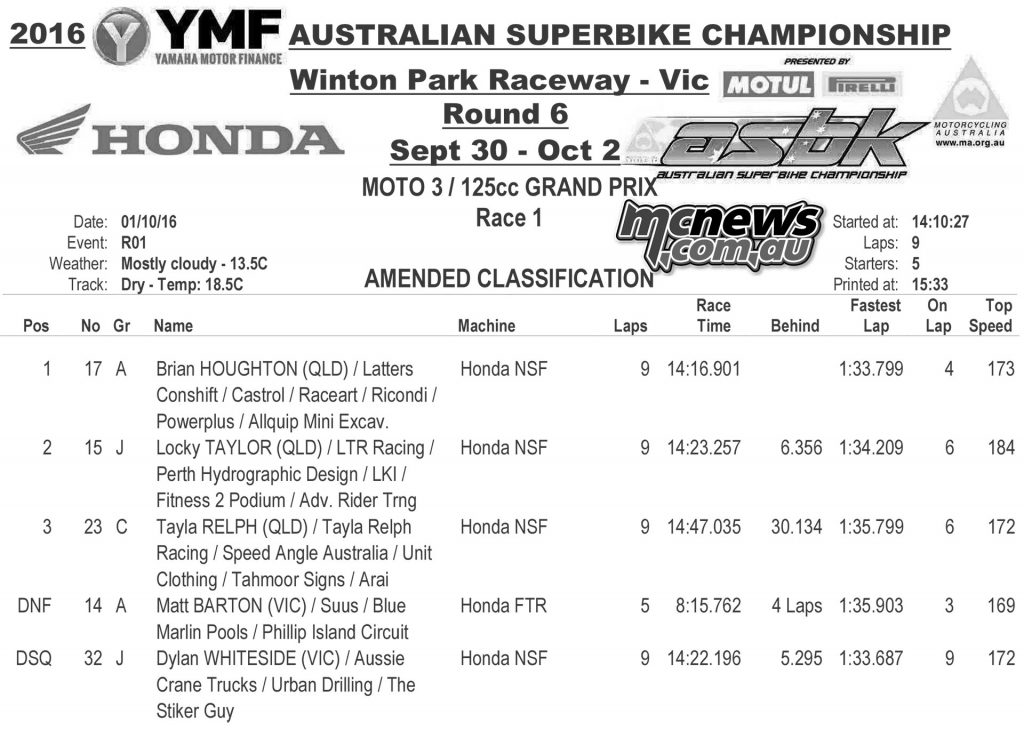 YRD’s Callum Alderson had the upper hand this morning having already ridden on the circuit, as the YMF supported R3 Cup dove out on to Winton Motor Raceway for their first 20-minute qualifying session of the day. And his track time in the Akrapovic Production class paid off, as Alderson set his pace as the man to beat in the YMF R3 Cup Q1, finishing with a lap time of 1:49.906. Despite current championship points leader Zac Levy having the fastest time for most of qualifying two, Alderson snatched it back with a fast time of 1:35.713, securing pole position.

As race one for the YMF R3 Cup competitors commenced it was a dash to the first corner, with Puma RV’s Zac Levy leading the pack. Despite Alderson’s attempts from second to claim the lead, it was Levy who crossed this start/finish line marking the start of lap two.

The intense battle between Levy and Alderson played out over four laps, with each Yamaha mounted rider having the opportunity to lead numerous times. But as the pack grew distant from the pair, there was a battle for third and fourth playing out between Aiden Hayes and Ford Brothers Racing’ Hunter Ford.

At the conclusion of racing for the YMF R3 Cup competitors, despite many attempts before the final corners of the race, Levy made a move on Alderson stick, allowing him to cross the finish line in the number one position over Alderson. Ford claimed third over Hayes, making an earlier move stick, both riders finishing almost 13 seconds behind the race leaders. 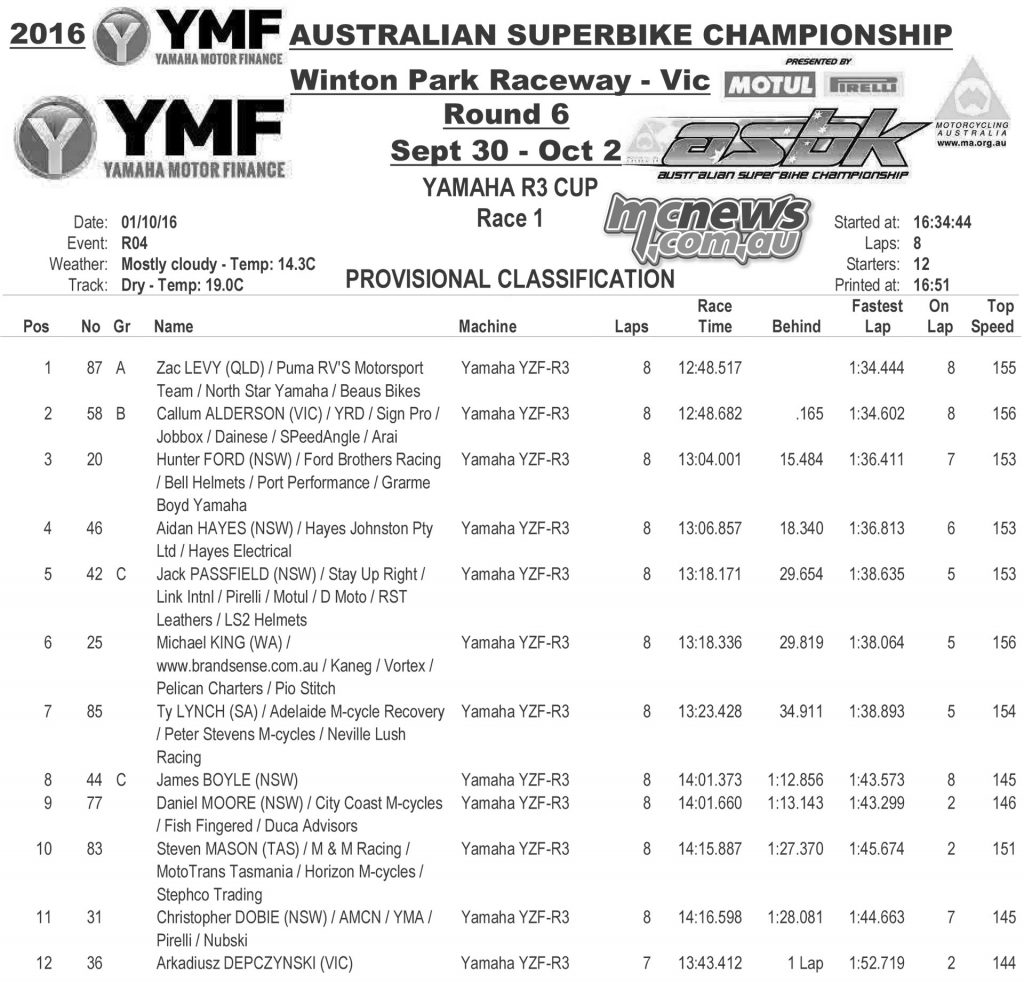 There was 15 minutes on the clock this morning has the Hartwell Stars of tomorrow headed out on a patchy but drying Winton Motor Raceway before their first race of the weekend this afternoon. After accumulating seven laps under the belt, it was enough to put Steve Willmott is pole position for race one, with a qualifying time of 1:40.498.

An impressive 14 competitors took to the grid for the first Hartwell Stars of Tomorrow race of the weekend, and after only just a single lap Emmanouil Ntaras and MM Painting’s Douglas Bloomer proved that they mean business this weekend, launching off into positions one and two.

But unfortunately for BMW mounted Ntaras a ten second jump start penalty hindered his charge out in front, allowing Bloomer to inherit the lead.

With the first race for competitors being a short sharp six laps, Yamaha R6 mounted Bloomer merely had to keep it upright in order to secure the victory. And secure a victory is exactly what he did.

Bloomer collected his first race win from Ntaras in second, followed by Adrian Forde who wrapped up his first race of the weekend in third. Luke Jones and Jamie Kennett crossed the finish line in fourth and fifth places respectively. 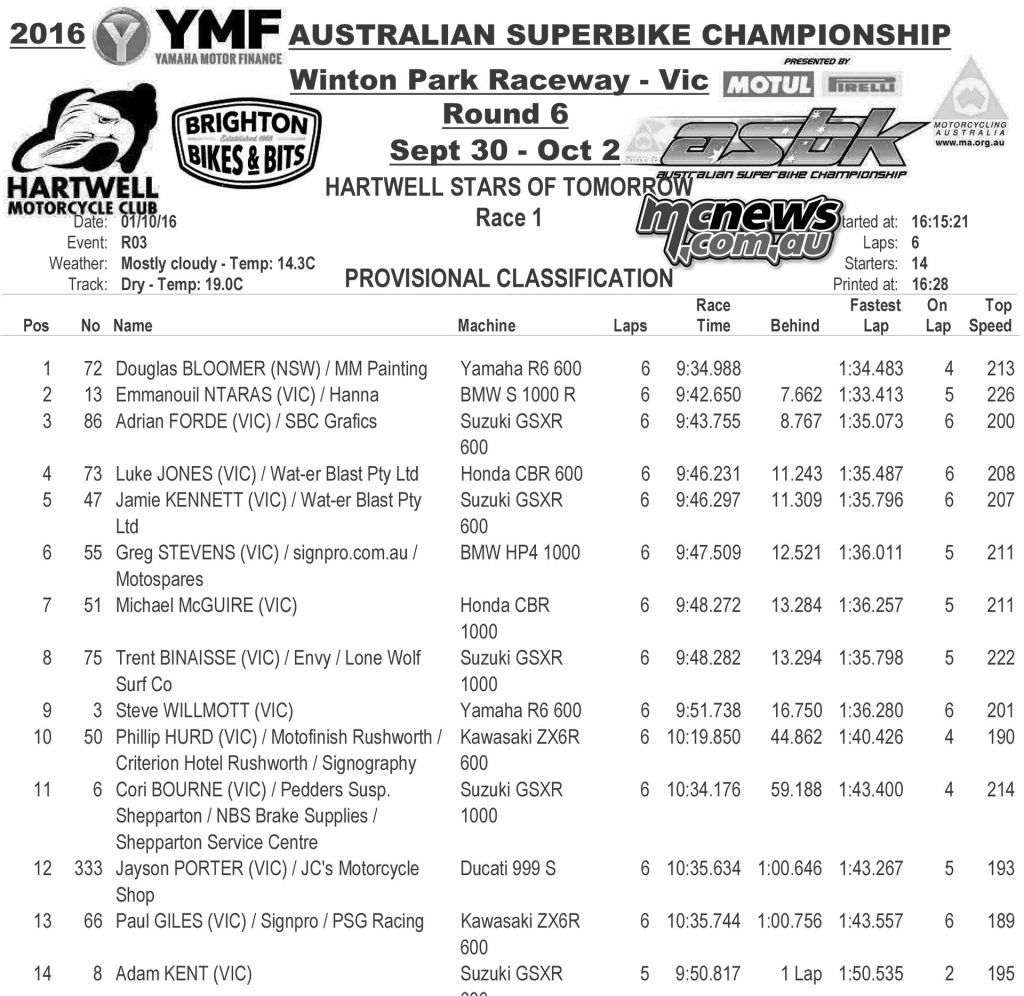 It was just before lunch that the GP Juniors surfaced on track for their only qualifying session of the day. Lucky enough for these developing riders, the track was almost dry which made the ability to post a fast lap time even easier. At the end of the session a strong time of 1:44.434 saw Scott Nicholson claim pole position.

From the moment bikes launched off the grid for the GP Juniors, pole position holder Scott Nicholson snatched the lead to defend off second placed Joel Kelso around the three kilometre circuit. The pair stretched their lead to 11.5 seconds on third placed Benny Baker with only two laps under their belt.

Kelso was patient the remainder of the race and positioned his passing move over Nicholson with only two corners remaining in the race. Making the move stick Kelso crossed the line victorious, only inches ahead of Nicholson. 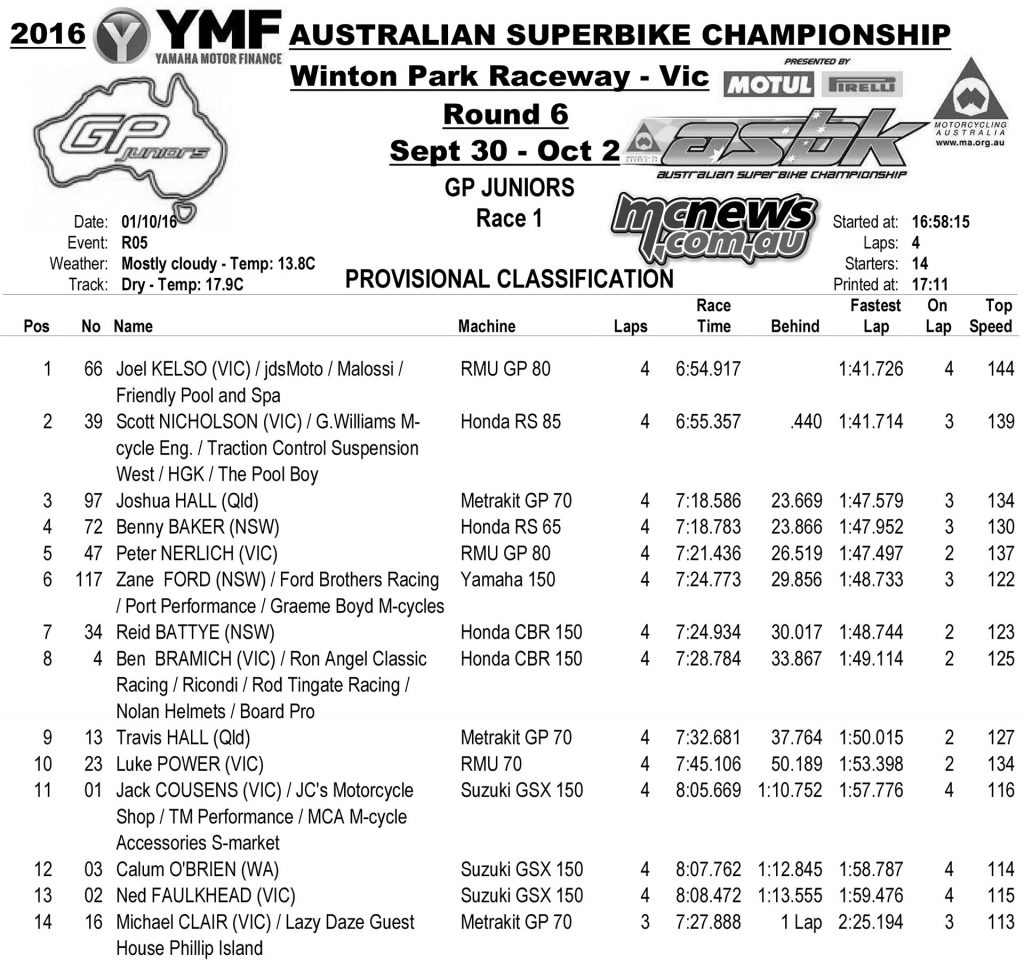