AFX-SBK gets underway at Mallala – first races run and won

Action got underway beneath cloudy skies at Mallala Motorsport Park this morning marking the second round of the Swann Insurance Australasian Superbike Championship.

First out was a 24-strong field of Kawasaki Ninja 250/300 machines for the opening bout of the weekend.  It was Kyle Buckley who drew first blood. 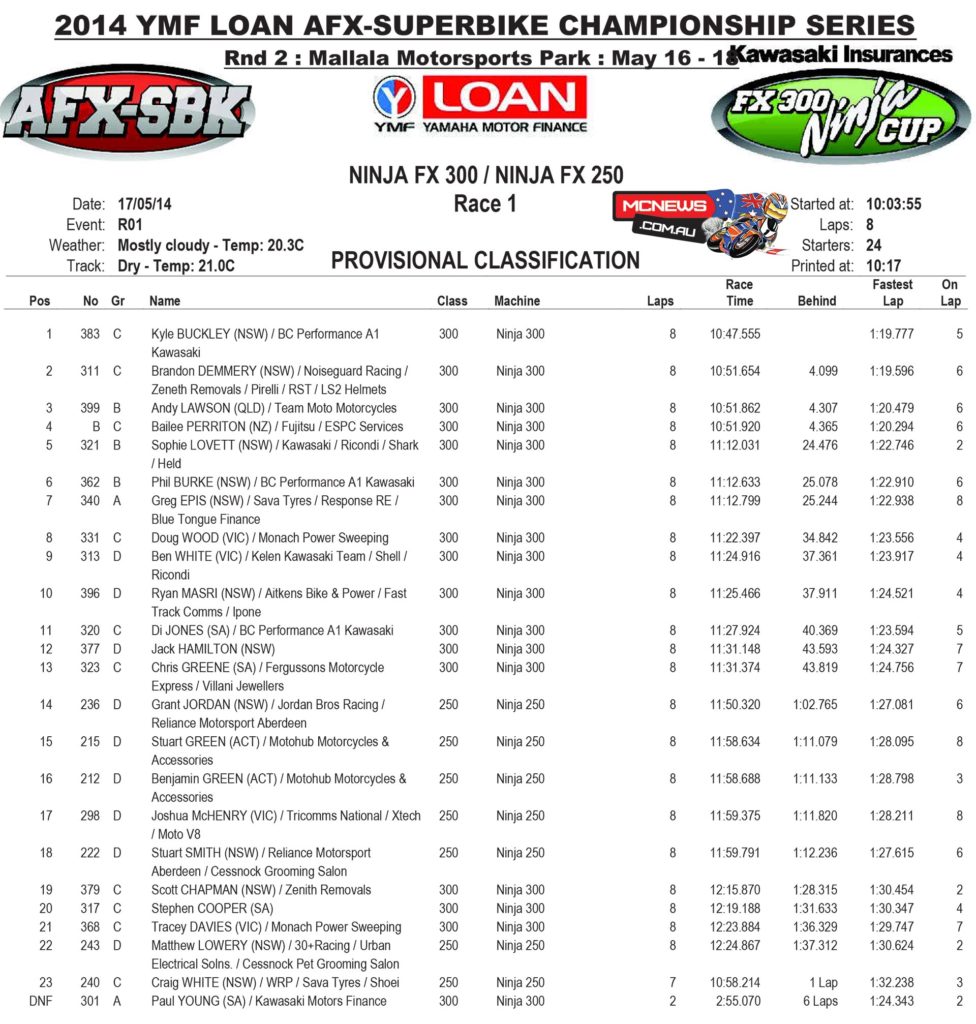 A diverse range of machinery in the shape of the Formula Oz category were up next.

One bike missing from the grid was Glenn Scott, the InsureMyRide rider deciding to focus on the Superbike class this weekend.

In Scott’s absence another Honda rider held sway at the front, Chris Trounson led the race from start to finish and took the win by three-seconds over Matthew Harding (Kawasaki), with Liam Wilkinson (Aprilia) a similar distance back in third. Adam Christie took fourth on a BMW ahead of Phil Lovett (Kawasaki) while Ryan Taylor was the first 600cc machine home and sixth outright. 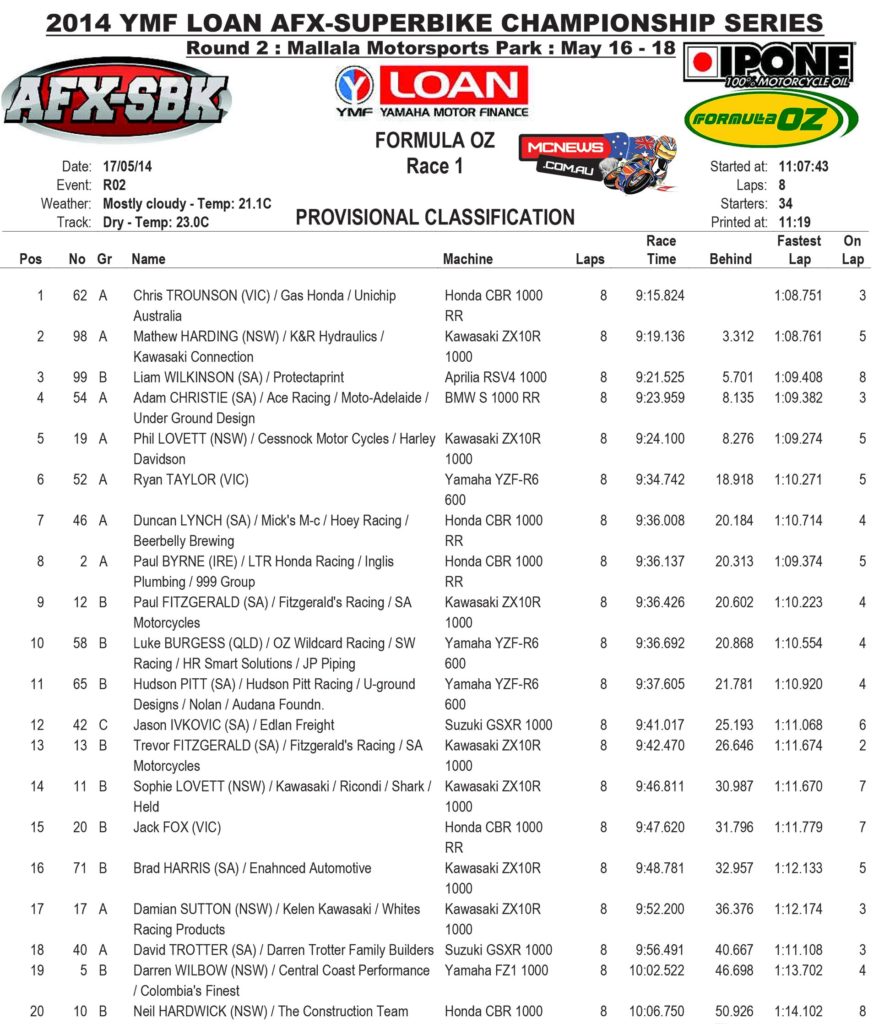 Aaron Morris led the field away in Supersport but a red flag put pay to proceedings at the end of lap one when a rider fell at turn six.

Action got underway again after a lengthy delay and soon an epic battle started unfolding between Aaron Morris, Daniel Falzon, Callum Spriggs and Aiden Wagner with Falzon dipping into the 68s on lap three.

Aiden Wagner succumbed to mechanical issues with four laps to run and started losing a lot of time, reducing the leading quartet to a triumvirate of combatants.

Aaron Morris was using plenty of race craft to keep Falzon’s lunges at bay. Falzon was forced to make a determined pass on the last lap at turn seven but Morris held his line and Falzon tumbled off into the dirt before rejoining the race to salvage sixth place.

Morris the winner over Spriggs while Wagner limped home to third place ahead of Patrick Medcalf and Justin DiGiandomenico.

On lap two Hook ran wide after the Northern Hairpin and lost a number of positions.

Bugden and Halliday put their heads down to ensure Jamie could not break away and with seven laps to run Bugden trailed Stauffer by less than half-a-second, with Halliday only a few bike lengths further behind.

Jamie then made a mistake or suffered some sort of a mechanical issue under brakes into the final complex, allowing both Bugden and Halliday through easily.

Wayne Maxwell really started to wind up as the race wore on. After breaking his leg only weeks ago while racing in Europe Maxwell put the bit between his teeth and clawed more than half a second back on the race leaders lap after lap as he worked his way through the field.

With two laps to run Maxwell was right on Halliday’s tail.  Maxwell made his move at the Northern Hairpin to dispense with Halliday and got the last lap board while climbing all over the back of Bugden.

The pair teammates at Suzuki last year, when Maxwell went on to win the ASBK Title, but there was no mates happening at Mallala today!  Maxwell got Bugden around the back of the circuit and pulled away, seemingly almost easily from the Yamaha rider to take victory. Halliday third, Condon fourth, Scott fifth and early race leader Stauffer claimed sixth ahead of Jones and Olson.

The final class to take to the track for their opening bout was the combined Pro Twins / Nakedbike category.

James Arnold got away to a great start, in fact a too good a start! The Ducati Panigale rider judged to have jumped the start and while finishing only two-seconds behind race winner Angus Reekie (KTM) on the track he was relegated to fifth after his jump start penalty was applied. Michael McMillan was promoted to second place and Simon Galloway third. 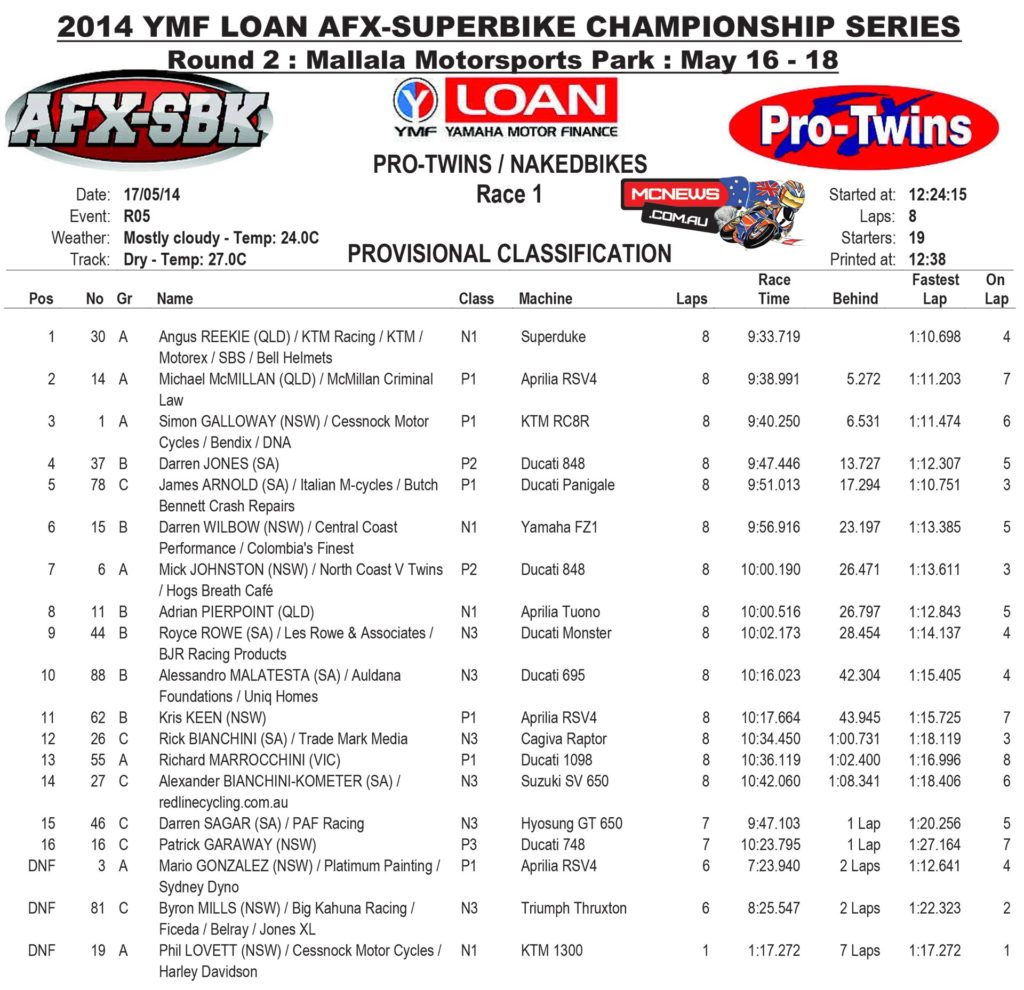