Perfect conditions greeted Australian Supersport competitors at 1011 this morning for the start of their second and final bout of the World Superbike weekend.

Falzon and Spriggs the chief protagonists through the first turns ahead of Morris, Davies and Pitt. Spriggs took the lead at Siberia, Morris also got the better of Falzon around the back of the circuit. Morris just about took to the grass at turn 12 in his efforts to get the best drive on to the chute for the first time, but by the stripe it was again Falzon that held sway up front.

Hudson Pitt was trying to stay with the leading quartet, while two-seconds behind him Mitch Levy and Sam Lambert tussled over sixth position.

Falzon was the only man to dip in to the 1m36s on the second lap to pull almost half a second over his pursuers. Spriggs and Davies returned fire on lap three, both putting in 1m36.5s to Falzon’s 36.6.  Heading into turn four for the fourth time Spriggs ran wide, allowing Davies an easy line through to second place.

That tussle for second place had allowed Falzon some breathing space, and the South Australian used it to good effect. Spriggs, Davies and Morris were virtually trading paint and elbows at almost every turn.

Hudson Pitt had been keeping the leading quartet honest, only a second behind that battle for second place, but his engine expired before the Hayshed at half race distance. His Suzuki looked to have gone bang in a big way, a terrible blow for the young South Australian who will now turn his efforts to competing the Malaysian Championship.

With three laps to run Falzon had been reeled in and was back within striking distance of his pursuers. Spriggs, Morris and Davies still nose to tail.  On lap seven Aaron Morris managed to break into the 1m35s with a 35.81, sucking him on to the back of Falzon and he slipped under the South Australian at MG Hairpin to lead the group on to the main straight to begin the penultimate lap.

Falzon took the lead again at turn one. Morris then went under him at turn four to slip ahead and led around then back of the circuit and on to the chute once again, only for Falzon to again blow past at the start line. Morris tried to get him back around the outside at turn two, Falzon held him out, the pair was leaving nothing in the bag now as they pulled away from Spriggs and Davies.

Morris took the lead again at turn four, led Falzon around Lukey, then backed it into MG but with Falzon right on his pipe. Morris still led Falzon around turn 11, wound up the R6 through turn 12 and looked to have a large enough gap to take the win, but again Falzon’s R6, seemingly, by far the faster machine as it simply pulled alongside Morris at the stripe. The timers giving the win to Morris by 0.011 of a second in a nail biter. Spriggs the final podium finisher ahead of Davies in what was a scintillating contest all round.

Daniel Falzon (1st overall) – “Can’t complain with the round one win, we finished second in that race by only 0.011 of a second ,so we were definitely in there for the win, but Aaron proved really strong at the end of the race, where we lacked a little bit, I had a few issues around lap seven and lost a bit of my lead. Anyway, no excuses, very happy with the round win and it is a great start to 2014.”

Aaron Morris (2nd overall) – “A pretty good weekend overall, I was stoked with it, just wish we had done a bit more testing but it’s a good start to the season and I’m happy with it.”

MCNews.com.au – You look to be struggling for speed compared to Falzon down the chute?

Morris – “Yeah, it’s been a rocketship last year and it seems as though nothing has changed, hopefully somebody will do something about it soon. Anyway, we look forward to our next outing at Formula Xtreme and then after that maybe to ASBK.”

Callum Spriggs (3rd overall) – “A good start to the year, managed to get third overall so pretty happy and good points for the Phillip Island Championship and can’t wait until our next race at Formula Xtreme.” 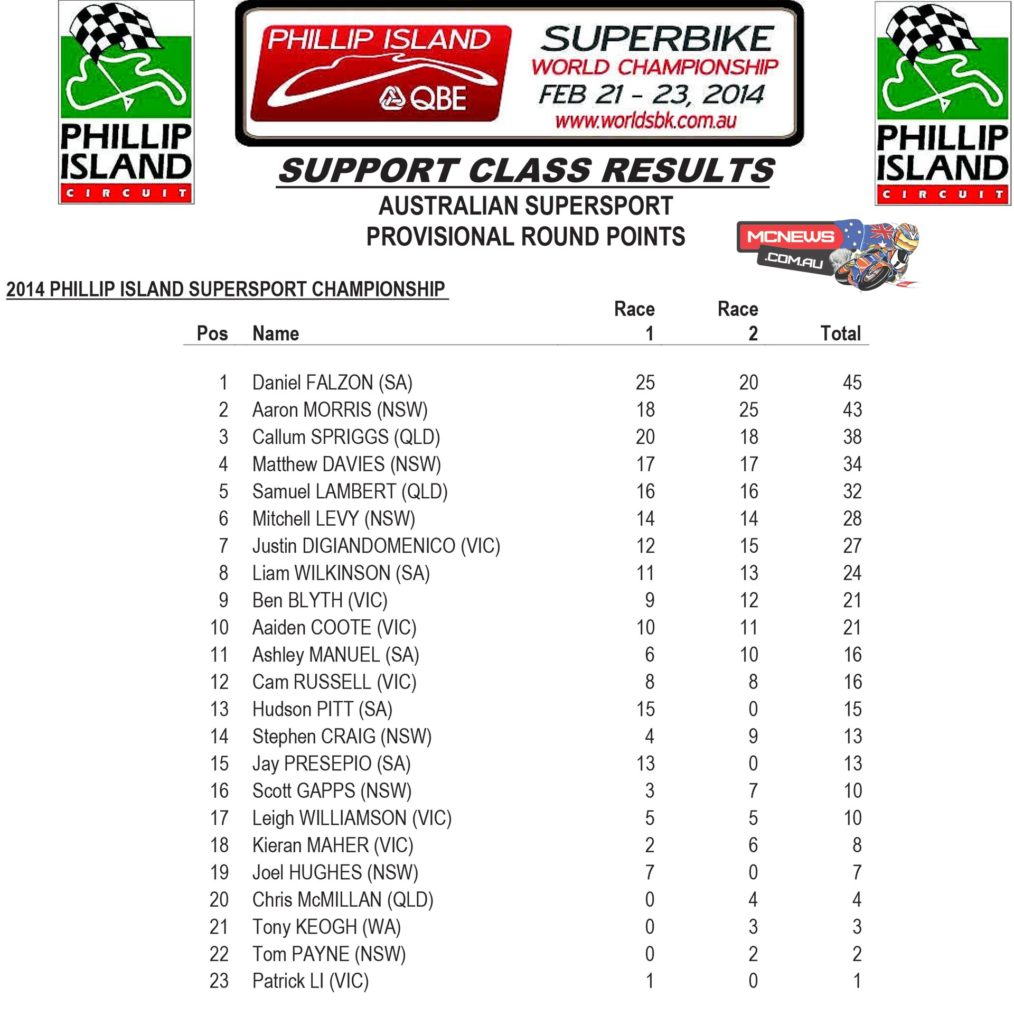