Bimota – From beginning to end

While living in Rimini, Italy, in the early 70s, Massimo Tamburini could not help but be keen about bikes.  His hobby of building special frames for road bikes soon caught the attention of local sporting enthusiasts and his hobby became a full-time passion.

In 1972 Massimo joined with Signors Bianchi and Mori to form the Bimota Motorcycle Company. The first frame kit, the HB1 (Honda/Bimota) was released in 1973 and the chrome molybdenum wrap around frame housed the common SOHC CB750 Honda Four. Ceriani forks, Marzocchi rear shocks, sporting tank and seat, cast wheels and cast iron brakes and Brembo calipers transformed the Japanese machine. These machines are now exceedingly rare. Few people could afford the price tag in those days.

Bimota’s real interest and passion was racing and in 1973 Amando Corecca rode a Paton engined Bimota in the Grand Prix. The 500cc Paton four-stroke twin produced 65bhp at 10,500rpm but it could not compete with the MV or racing two stroke Suzukis and Yamahas. Bimota’s reputation was enhanced when in 1975 Johnny Cecotto won the 350cc World Championship on a Bimota framed Yamaha and also in 1976 when Walter Villa won the 250cc and 350cc World Championships on a Bimota framed Aermacchi Harley-Davidson (H-D).

Also attracting attention that year were Bimota framed mono-shock Morbidelli engined 250s. In 1976 a machine of this caliber was capable of 260km/h pumping out 64bhp from a water-cooled two-stroke twin.

Bimota built an Aermacchi H-D 500cc race bike in March 1976 which used a 500cc twin water-cooled two-stroke engine with 4 carburetors and 90bhp. The machine was extremely quick but very temperamental. H-D preferred to concentrate on its 250s and 350s with Walter Villa.

The same year Suzuki commissioned Bimota to produce 50 frame kits for its water-cooled TR500 twin. These attractive machines produced 83bhp at 9,000rpm and ran Bimota magnesium wheels, Brembo disc brakes and Ceriani forks. Dry weight was 121kg. Whilst rare one of these machines can still be seen at Governor’s Bridge Motorcycles in the UK.

The success of this machine led to the GS750 Suzuki powered SB2 which appeared at the 1977 Bologna show. It was the first Bimota available as a frame kit or as a complete machine. The road version featured a spectacular wrap around frame with swooping bodywork. Very expensive, probably fewer than 70 of this model were made. Although retailing at 3,800 UK pounds, at the time, the razor sharp handling and Japanese power made this a very desirable machine. One of the first real superbikes which handled as well as went like stink.

Next and the start of a long line of street machines was the 1977 KB1 which housed a 900/1000cc Kawasaki DOHC Four in a beautiful package.

Although Bimota again came to attention on the race scene, when Jon Ekerold won the 1980 350cc World Championship on a YB3 Yamaha, the company chose to concentrate on the road market. The result a string of high priced Honda, Kawasaki, Yamaha, Suzuki and Ducati exotica.

Building their own fuel injected 500cc water-cooled two-stroke engined GP/road bike in the late 90s (the V-Due) led to financial collapse when the bike proved unreliable.  The company was then bailed out after going into receivership only for them to go belly up again a few years later.

The last remaining Bimota stocks are being sacrificed by up to $10,000 off their previous prices.  Which caused major heartache for owners of later model Bimota machinery, who saw thousands knocked off the resale value of their motorcycles overnight. 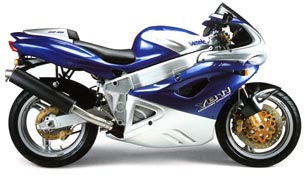 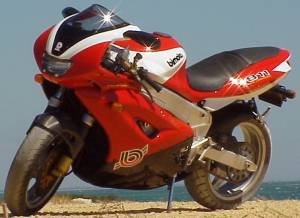