The YB11 is powered by a lightly modified Yamaha YZF1000 ThunderAce donk.    This particular Bimota I tested had steel brake lines and an Arrow muffler as the only departures from standard trim.  And the 207 Dunlops were not the OE fit.  When the owner bought this bike he asked for the Michelins to be changed to the Dunlops.

The YB11 is getting a bit long in the tooth now.  It was first released in 1994.  And I have no doubt that, at that time it would have  seemed like an incredibly awesome motorcycle.  In 1999 we have the latest incarnations of the R1, GSX-R 750 & RSV Mille to compare the Bimota to.   Nevertheless it still measures up to the opposition in many respects. 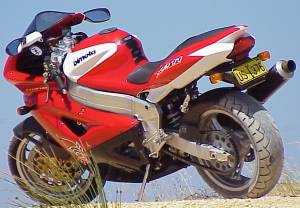 The seat is a real race type, quite low to the ground, at only 770 mm.  But It is the shape that strikes you when you jump aboard.  It has no flat edges and is well rounded.  This feels a bit strange as you take off, then tip it into a corner and think, ‘holy shit I better grip this tank a bit harder or I am going to slide off the inside of the seat’. The seat however, does have good points.  It isn’t as uncomfortable as you might think.

I covered around 600 kilometres during the first day of the test without too much whining and leg stretching.  The shape makes it incredibly easy to move about.  It just takes some getting accustomed to. 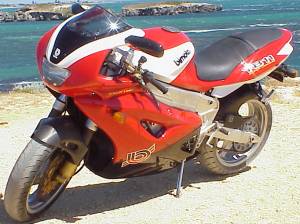 The reach to the bars is quite wide and low, even when compared to the most extreme Japanese sportsbikes.   Nevertheless I didn’t find ourselves complaining about weight on the wrists.   It feels a bit strange at first but doesn’t seem to make you too uncomfortable.

Everything on this bike from an ergonomics point of view is very different to Jap sportsbikes, but somehow it never made me really  uncomfortable.  The long reach back to the high pegs shocked me a little at first, but my legs never really gave me ’cause for complaint.   Strange – it must be reasonably comfortable somehow.  I am only around 180 cm.   The owner of this bike is over 190 cm and he tells me it is a very comfortable riding position for him, when compared to most sportsbikes.

The levers are both 4-position adjustable and provide good feel, the clutch especially.  It is internally unchanged from the ThunderAce as far as I know but somehow it seems so much better.   It could be the Brembo lever and master cylinder.  I am no star of the drag strip getaway act, but I could holeshot off the line aboard the YB11 far  quicker than anything I have ridden previously.  A nice level of wheelspin and wheelie was easy to modulate.

The 5-speed gearbox is quite good, but far from perfect.  The shifts are quite clunky. 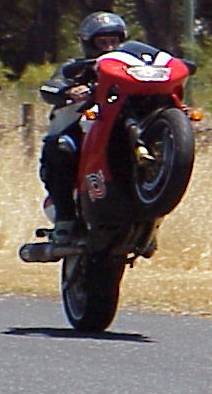 The weight bias is very much towards the front end, as you would expect from such a race style bike.   This helped the aforementioned launches off the line, but when combined with the pretty stiff rear suspension it made made pulling monos a  hard task.

I can normally jump on a bike and pull a half respectable mono after about 5 minutes of getting used to the seating position and feel.

I got the hang of it in the end.  The trick was to get it up high nice and early, play the mid-range and change up early.

A bit of a top end stagger showed up during the dyno runs, this could have also affected the ease of pulling wheelies on this particular bike.

The rear shock and forks are both from Paioli.  The forks posses gigantic 51mm stanchions.  Both were quite firm, which is to be expected of a machine of this race bike style.

The suspension felt good but the worn 207 Dunlops fitted to the test bike did not inspire enough confidence to push it too hard.  With decent tyres I reckon the Bimota would handle a little like a GSX-R 600, but with more stability.

The race style suspension does demand that you keep your movements smooth.  I do not believe this bike would suffer fools.  Any little mistakes are felt.  On softer bikes the suspension takes care of any hamfistedness.

That is not to say the Bimota feels dangerous.  It doesn’t at all, it just gives me the impression that a nice smooth riding style is required for fun to be had.

The brakes are supplied by Brembo and are excellent.  The initial bite isn’t as hard as the latest six-potters but they are very strong and do not fade.  The rims are lovely Antera items and really do look quite trick.

Fuel range is a little over 200 kilometres.  An orange warning light tells you when there is about 4 litres left in the 15 litre bodywork covered, aluminium tank.

The other 3 idiot lights are for neutral, oil and high beam.  The gauges are white faced with a temp gauge situated between the speedo and tacho.

The Bimota is around $30,000. Is this justified ?  That would have to be up to the individual.  It is a rare machine. I believe there are less than a thousand in existence worldwide.  It does have extremely high quality/cost suspension components.   It is very individual and a great looker.

Whether this adds up to value for money I can’t say.