As before, the heart of the new F 750 GS and F 850 GS is the in- line, 2-cylinder engine, which has, however, now been completely reengineered.

The new F 850 GS generates 70 kW (95 hp) at 8250 rpm and develops a maximum torque of 92 Nm at 6250 rpm to deliver its supreme engine performance. In particular, the increased torque results in improved pulling power.

In the new F 750 GS and F 850 GS too, the 2-cylinder in-line engine is installed transversely to the direction of travel and is liquid-cooled. In contrast to the engines of the previous models, however, its crankshaft has a 90-degree journal offset and a 270 degree firing interval (previous models had a 0 degree crankshaft journal offset and a 360 degree firing interval. This change is accompanied by a new sound, which BMW claim is similar to that of the 90 degree V2 engine.

While the oscillating mass forces of the previous models were compensated for by a connecting rod fitted to the middle of the crankshaft with a defined arrangement of counterweights, unwanted vibrations in the new engine are eradicated by means of two counterbalance shafts.

These two opposed counterbalance shafts are arranged in front of or behind the crankshaft, a little below its axis, and are driven from the left of the crankshaft by the spur gears. In conjunction with the newly designed crankshaft and firing interval of 270 degrees, this results in a considerable increasing in running smoothness accompanied by a thrillingly impressive engine sound.

To prevent unwanted churning losses and to ensure maximum operational safety, even under tough offroad conditions, the engine of the new F 750 GS and F 850 GS features dry-sump lubrication, which does not require a separate tank for engine oil.

In this area, the lubricant is constantly pumped away by the oil pump and transported to the gearbox housing before it runs without pressure into the oil sump. The oil-feed pump then supplies the oil circulation from here. Its great offroad character is reflected in the F 850 GS’s underside protection, which protects the oil sump from any damage.

The cylinder head of the new F 750 GS and F 850 GS contains two rotating overhead camshafts driven by a tooth belt, which operate four valves per cylinder by means of light and therefore fixed-speed rocker arms. The timing chain drive is on the right-hand side of the engine.

The valves are dimensioned to support an optimised combustion chamber design, which results in the best possible power and torque exploitation as well as increased efficiency. They measure 11.2 degrees on the intake side and 13.3 degrees on the outlet side. The valves have a plate diameter of 33.5 mm (intake) and 27.2 mm (outlet). The compression ratio is 12.7:1.

Carburation is by means of intake pipe injection with next-generation BMS-M engine control. The rider’s control signals are passed on directly by a sensor on the throttle grip via an e-gas system to the motor controller, which regulates the angle of opening of the throttle valves so as to maximise controllability and optimise the response characteristics.

The entire power transmission of the new F 750 GS and F 850 GS has also been subjected to complete reengineering. The primary drive arrangement on the right-hand side of the engine is responsible for transmitting the torque from the crankshaft to the clutch by means of spur gears.

This is now designed as a self-amplifying anti-hopping clutch (wet clutch). Not only does it allow the rider to benefit from discernibly reduced operating forces in the adjustable clutch lever but it also leads to a significant reduction in engine drag torque, resulting in a considerable plus in rider safety – particularly in the case of braking manoeuvres performed while changing down in gear.

Six-speed gearbox now with secondary drive arranged on the left- hand side. Gear shift assistant Pro for fast up and down gear shifting without using the clutch, available as optional equipment ex works.

In the interest of improved riding dynamics, the newly engineered 6-speed gearbox now transfers the torque with an optimised transmission ratio spread to the secondary drive on the left (formerly right), in the form of an O-ring chain. For fast up and down gear shifting without using the clutch, 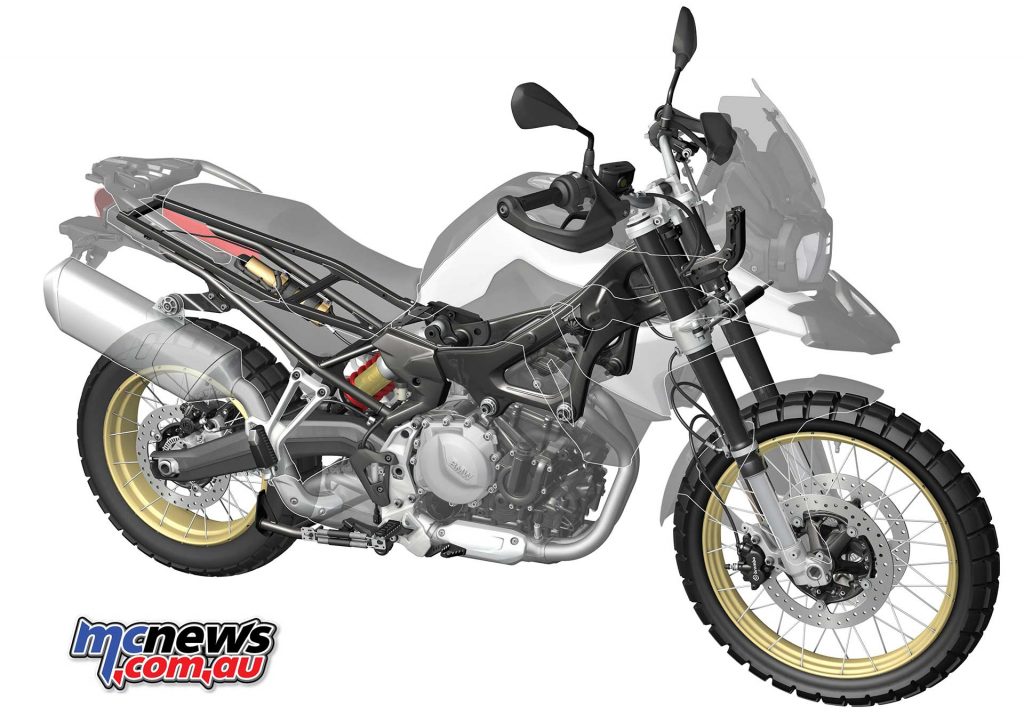 With this it is possible to shift gears up without using the clutch, thus permitting perfect acceleration with virtually no interruption in traction force. Moreover, the Gear shift assistant Pro also makes it possible to change down without using the clutch. This enables very fast gear shifting with a minimum of clutch use, resulting in a discernible reduction in undesirable load reversal effects on the back wheel and the jerk movements this can cause.

In addition, the independent movements of rider and passenger that are associated with conventional gear changing are considerably reduced using the Gear shift assistant Pro. This making joint motorcycle enjoyment that much more comfortable. The Gear shift assistant Pro also simplifies things considerably for motorcycling beginners and the sports-minded rider can enjoy very fast shifting.

By positioning the secondary drive on the left-hand side of the motorcycle, it has been possible to move the exhaust system of the new F 750 GS and F 850 GS to the right. This is of great advantage when it is necessary to manoeuvre the motorcycle by hand, which the rider generally does from the left-hand side. The end muffler, which is now on the right and, like the rest of the system, is made of stainless steel, provides considerably more space to do this and also reduces the danger of suffering a burning injury from the hot muffler. The new F 750 GS and F 850 GS can also be fitted with an HP exhaust system with a highly sporty design, as optional equipment ex works.

The F 750 GS and F 850 GS already come with the two riding modes ‘Rain’ and Road’ installed as standard, to allow the individual desires of the rider to be accommodated. Also included in the standard features is the ASC automatic stability control, which ensures a high degree of rider safety.

With the riding modes ‘Rain’ and ‘Road’, the riding characteristics of the new F 750 GS and F 850 GS can be adapted to the majority of road conditions.

In ‘Rain’ mode, the throttle response is configured to be soft, while the control characteristics of the ASC or DTC and ABS or ABS Pro are based on wet and slippery road surfaces.

In ‘Road’ mode, the engine permits an optimum throttle response, while the ABS and ASC control systems are configured for ideal performance on all roads. The same applies to the ABS Pro and DTC dynamic traction control systems, available as optional equipment. If the ESA electronic suspension adjustment (available as optional equipment) is fitted, damping at the rear takes place in the default (‘Road’) setting.

The new GS models of the F series can be equipped with the riding modes Pro option as optional equipment ex works. They additionally contain the riding modes ‘Dynamic’ and ‘Enduro” as well as the DTC dynamic traction control and the curve-optimised ABS Pro with dynamic brake light. The riding mode ‘Enduro Pro’ is activated by means of an encoding plug and is available only in the F 850 GS. It offers additional customisation options for altering the vehicle characteristics in accordance with rider needs and further increases the riding enjoyment available with the F 850 GS.

In ‘Dynamic’ mode, the sporty side of the new F 750 GS and F 850 GS really comes to the fore. Throttle response is then instantaneous and the DTC and ABS Pro systems are coordinated for road use with high frictional values. If fitted, the Dynamic ESA is set to the default ‘Road’ configuration.

In ‘Enduro’ mode, the offroad capabilities of the new F 750 GS and F 850 GS can be experienced particularly impressively and intensively. This mode offers a soft engine response and the restrained intervention by the DTC allows an experienced rider to perform deliberate and controlled drifting. This characteristic, as with that of ABS Pro, is configured for loose surfaces and road enduro tyres, typical of terrain situations. The coordination of the Dynamic ESA function is set to meet the needs of terrain riding and configured with the ‘Enduro’ setting.

Finally, ambitious enduro riders will be interested in the ‘Enduro Pro’ mode for the full offroad performance offered only by the F 850 GS. This riding mode is configured for the use of lugged tyres and is activated by a specially coded plug. With ‘Enduro Pro’ the rider can individually configure and combine characteristics such as throttle response, DTC and ABS Pro. Here too Dynamic ESA is modified for offroad use and is set to the ‘Enduro’ value.

Some surprises in how brands have fared at P.I. WSBK

Some surprises in how brands have fared at P.I. WSBK