Boris on COTA MotoGP | A Yellow Rose in Texas

Boris on COTA MotoGP – A Yellow Rose in Texas

Marquez has won the last eight races on US soil. The last four from pole position. If the Texans didn’t think he was Mexican, it’s a fair bet he could be governor of the state.

In the lead-up to Sunday’s serious business, the practice sessions were crash-fests, with Asparagus A taking the crown with four get-off in QP2. But many racers visited the little rocks edging of the Circuit of the Americas – Marquez, Iannone, Lowes (or course), Bautista and Lorenzo. Rins even broke his arm and was declared unfit for the race.

It seems the track had degraded since 2016 and was now riddled with bumps, which Dani Pedrosa classed as “shocking” and it unsettled many of the teams. Aprilia even hauled out a new fairing, but that could be just because Asparagus A had broken all their normal spares.

As it turned out, things looked both normal and strange on the grid. Marquez was on pole, Vinales in second, Rossi in third, then Pedrosa, Zarco and Lorenzo, who was staring at the back of Rossi’s bike in sixth place and being very grateful he wasn’t further back staring at racers he’d never seen before.

Seconds after lights-out, Dani Pedrosa pretended like it was last century and speared into the lead ahead of Marquez, Rossi, Lorenzo and Vinales, who didn’t get the best of starts.

But it only took Maverick four corners to pass Lorenzo. It took Lorenzo a few more corners to pass him back, but Vinales was having none of that and put Lorenzo behind him at turn 13. Zarco then passed Lorenzo at Turn 19, and at the end of the first lap Lorenzo was still in the same place he had started the race, sixth. Ahead of him Dani Pedrosa led Marquez, Rossi, Vinales and Zarco. Close behind him rode Crutchlow, Dovi, Miller and Folger.

It did not bode well for Lorenzo in the medium- to long-term.

But it really went to crap quickly for Maverick Vinales, who low-sided himself out of the race on the next lap, for no obvious reason. But we’ll blame the bumps, shall we?

And with that, the championship suddenly looked very different.

The race itself became somewhat processional for while, alleviated only by Abrams retiring sideways into the kitty litter.

At the pointy end, Dani led, Marquez followed, Rossi sat comfortably in third and Zarco was wondering if and when he should make a play for the big time.

Lorenzo went backwards a few more places, having been passed by Crutchlow and his team-mate, Dovizioso.

Meanwhile, the camera found Maverick Vinales in his pit. He very suddenly looked very young and very vulnerable – which is what happens when you learn you’re not actually immortal.

Out on the track, Zarco was now the fastest man in the race and an overtaking manoeuver on Rossi was clearly on the cards.

Miller was making life a misery for Lorenzo, who had uniquely opted for a soft/soft tyre combination in the hope his wilful Ducati would provide some of the feel his old Yamaha freely gave him no matter what tyre combo he put on it.

And then Zarco had a crack. Rossi ran a little wide on Turn One and the Frenchman decided it was his time to shine. He pushed forward and tried to go up the inside of the Doctor. Instead, he forced Rossi wide and onto the run-off area, whereupon Rossi rejoined the race having straightened a corner, and was now closer to Marquez than he was until Zarco forced him wide.

Race direction kinda saw it that way as well, and penalised Rossi 0.3 of a second, which was to be deducted from his time at the end of the race. Lin Jarvis was shaking his head in disbelief.

But Rossi did not know about the penalty. Nor did he find out about it during the race, which makes what happened next all that much more fascinating.

Marquez decided Pedrosa had led for long enough and went past him in Turn 10. Dani returned the favour in Turn 11, as Rossi watched patiently from just behind them both. Zarco, for his part, had decided overtaking Rossi was not something he needed to try again this race and drifted back into a solid fourth to play with Crutchlow.

With 13 laps left to go, Marquez passed Pedrosa again, made it stick, and then started smashing out 2.05 laps while everyone else was making 2.06 laps. Except Loris Baz, who threw it away on Turn 19 and stopped making any laps.

Rossi’s 2.06 laps were a few tenths of a second quicker than Dani Pedrosa’s laps, and it was obvious Dani’s front tyre was starting to fry itself on the right-hand side.

But it did not stop him having another go at Marquez. He outbreaked the kid coming into Turn 12, and briefly stuck his Repsol Honda in front of Marc’s. But Marc was having none of it. He dialled it up, passed Pedrosa, and began opening a serious gap, reminding everyone why he was still the King of Texas.

Behind all of this, Crutchlow and Zarco were re-fighting the battle of Waterloo, and Iannone had passed Miller and moved so close to Lorenzo’s rear tyre the little black balls coming off the soft Michelin must have been sticking to his visor.

Six laps were left. Marquez had disappeared into the distance and Rossi was stalking Pedrosa with intent, still unaware of the 0.3-second penalty he had. Certainly, Rossi’s third position looked safe – Zarco and Crutchlow were miles behind him, but if he got around Pedrosa, he would have to beat him by 0.4 seconds or more to secure second place.

But he did not know that when he eventually passed Dani. And it did not matter. With two laps left, Rossi quickly opened up a one-second gap.  Behind Dani and his dying front tyre, Crutchlow recreated Wellington’s victory over the French at Waterloo for fourth, Dovizioso rode a lonely race to secure sixth, while both Iannone and Petrucci shunted Lorenzo back into the clutches of Miller, but the Spaniard held grimly on for ninth. Which everyone in his team agreed was better than 10th. Or gravel.

And that’s the preliminaries done with. The circus heads back to Europe now.

And Rossi, despite all the predictions (except mine), leads the championship as they travel to sunny Jerez.

Where he won last year. 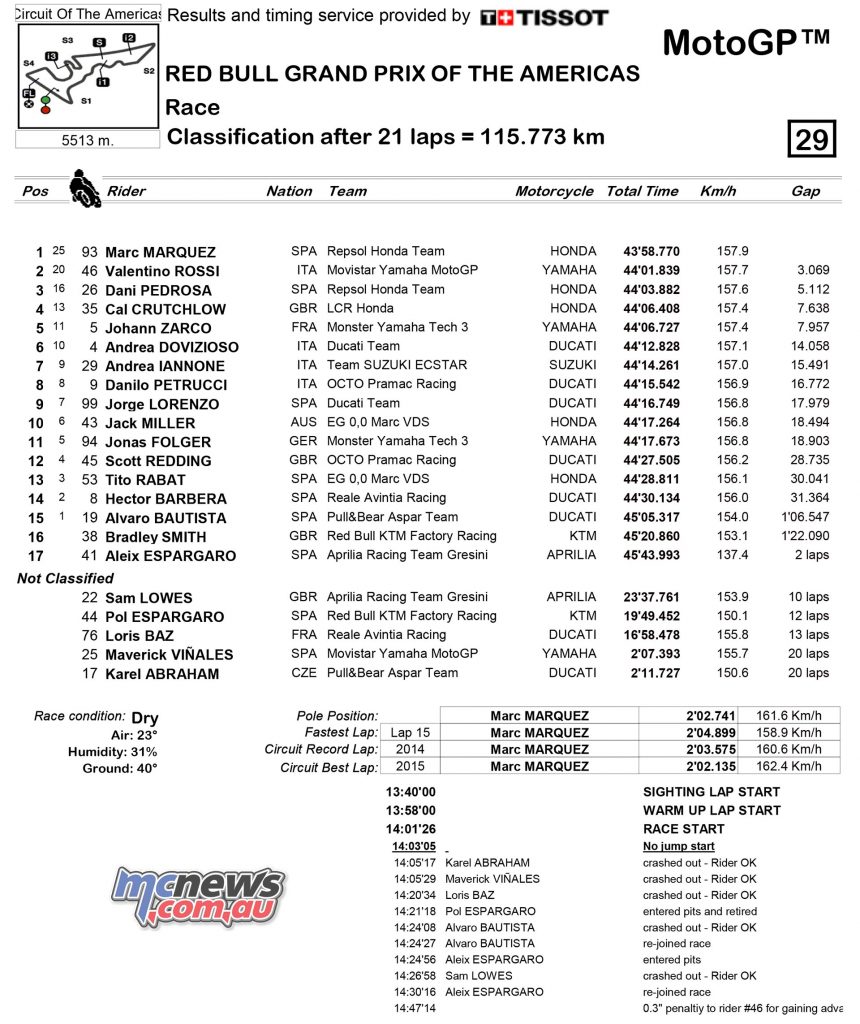 2017 MotoGP World Championship Standings after round three at COTA

Massive Supercross Image gallery from round 12