I did say I would need Valium for the Australian round of the MotoGP championship, didn’t I?

Say what you want about the spectator facilities at Phillip Island (and I have, at length), that racetrack tends to throw up some of the most magnificent motorcycle racing the world has ever or will ever see.

And that’s exactly what happened.

It was a race which, as Crutchlow observed after finally beating Iannone to the line for fifth, “Is what MotoGP is all about.”

Cal might not know much, but he sure does get that.

Qualifying and practice was subject to the usual weather vagaries of the island. It was sunny, it was windy, it was wet, it was damp, it was dry, it was sort of dry…it was what it says on the Phillip Island box, ie. “You don’t like the weather? Wait five minutes”.

And when they lined up on the grid, it looked like the championship, as far as Dovizioso was concerned sitting way back in eleventh, was going to be Marquez’s to lose. Dovi makes no secret of not liking the track all that much and it showed.

Marc was on pole, again. Beside him sat Vinales, who looked like he had found some of the form he’d been missing since the start of the season, while Zarco sat ominously in third, three-tenths of a second shy of Marquez’s time, and a scant two-tenths ahead of Iannone, who appeared to have finally found the Suzuki’s sweet spot, and was perched in fourth. Miller had obviously been incentivised by his recently broken leg and an ebullient home crowd was sitting in fifth, just ahead of KTM’s Asparagus brother.

Rossi was sixth, and Aprilia’s Asparagus completed Row Three along with a confused-looking Brad Smith.

Lorenzo, who’d had a very fast get-off in Practice and who’d been seen limping along on crutches because his knee had been turned into porridge, was back in 16th, having been out-gunned by Rabat, Rins and young Abraham – a bloke who actually doesn’t even get paid to race. 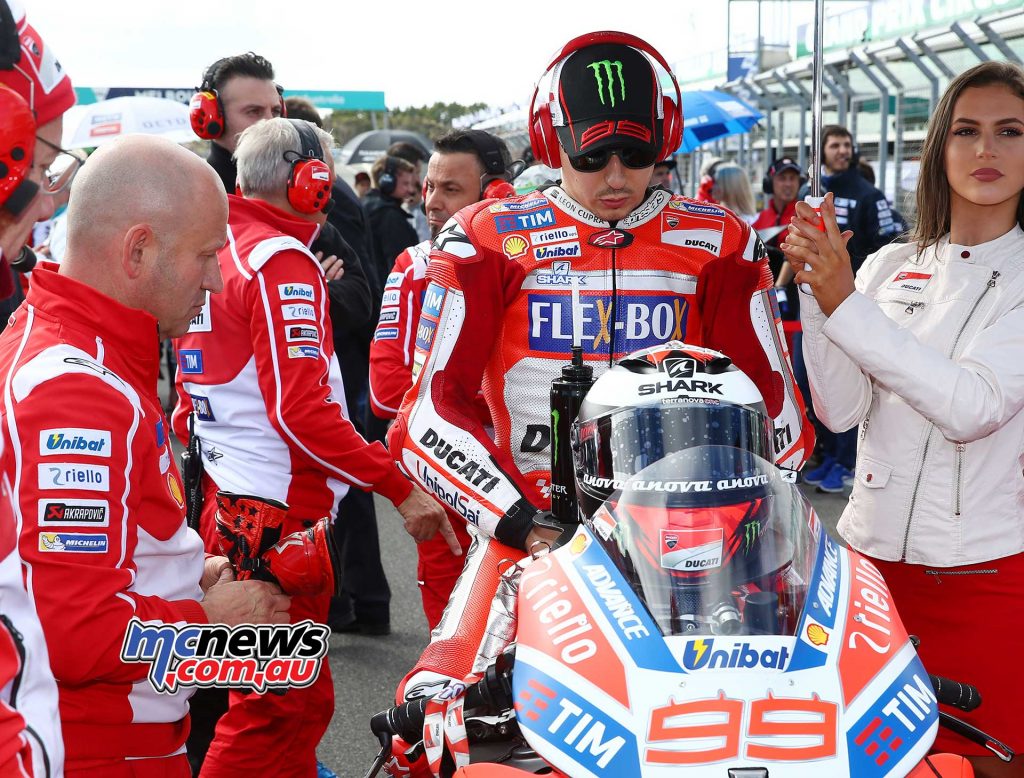 Marquez led a fearsome charge into Turn One, but it was Miller who came out of Southern Loop in front – and then began to gap the field.

If the Australian crowd was permitted to light flares, tear off clothing and set fire to tents, like they do in Italy, France, or Spain, this is when that would have happened.

A bloke with a broken leg was leading his home MotoGP. It was almost worth going to jail for, sick with Tasering and blinded by pepper spray.

Marquez must have been amazed because he faded back a few spots, and Vinales and Rossi began to chase Jack.

Rossi actually caught him, and then there were two blokes with broken legs leading the race.

But then it just got wilder. Dovi had ridden himself back into 20th after overcooking a corner, while Marquez remained in touch with the lead, which was to change constantly, much like the manifold fights for the other two steps of the podium.

Amazingly, only one rider sailed into the vegetables when Asparagus A threw his Aprilia at a passing seagull.

I was astonished and delighted at what was happening up the front. Zarco actually rode his bike into Rossi, leaving the Doctor with tyre marks up the side of his leathers, while Iannone, Vinales, and Marquez hammered away at each other like fiends.

Of course, the only rider banging for a championship was Marquez. It was his to lose, which made his ride all the more astonishing.

He must have known Dovi, his only rival for the title, was back in 12th, fighting it out with Petrucci and Lorenzo for the Slowest Ducati At The Island – which Petrucci finally claimed when he came second-last just ahead of the Tech 3 Yamaha caretaker, Broc Parkes – but it made no difference to Marquez. Like I said. The kid is carved from the very soul of racing.

And it was brutal as hell up the front, as Rossi once again demonstrated there seems to be no end of fight in his 38-year-old body.

But five laps from the end, Marquez began to stamp his authority on both the race and the 2017 title. While the battle raged for the podium, he managed to eke out a bit of a lead, as Rossi fought it out with both Zarco and his own team-mate Vinales for second.

I kept expecting Zarco’s soft-soft tyre combo to finally give up, but the Frenchman has proved to be a master at managing his hoops. It took every bit of Rossi’s decades-forged race-craft and inherent bastardry to keep him at bay, as well as making sure Vinales understood who the number one Yamaha rider still was.

It was certainly a MotoGP race that ticked every box. Old masters and young geniuses, grinding fairings, getting forced wide then recovering for (or from) seemingly impossible overtaking manoeuvres, one bloke chasing a championship but not leaving anything in the dressing room despite his rival being miles behind him…it’s almost impossible to write about what we all saw, lap after searing lap, and I had to watch the race twice just to absorb it all.

And this was after the blistering wet magic that was performed at Motegi the week before.
Great things happen in threes, they say, and while Marquez might be 33-points ahead of Dovzioso now, you’ll remember Dovi won there last year. And there is still one more race after Sepang.

I’ll get another Valium prescription. My doctor’s good like that.