I don’t think anyone likes the Qatar round. It’s run at night under lights, which weirds everyone out. There’s sand on the track, there’s dew on the corners, there’s the howl of camels mating out in the dunes, and the screams of locals being flung out the doors of their desert-duelling Land Cruisers if what I see on YouTube is true. 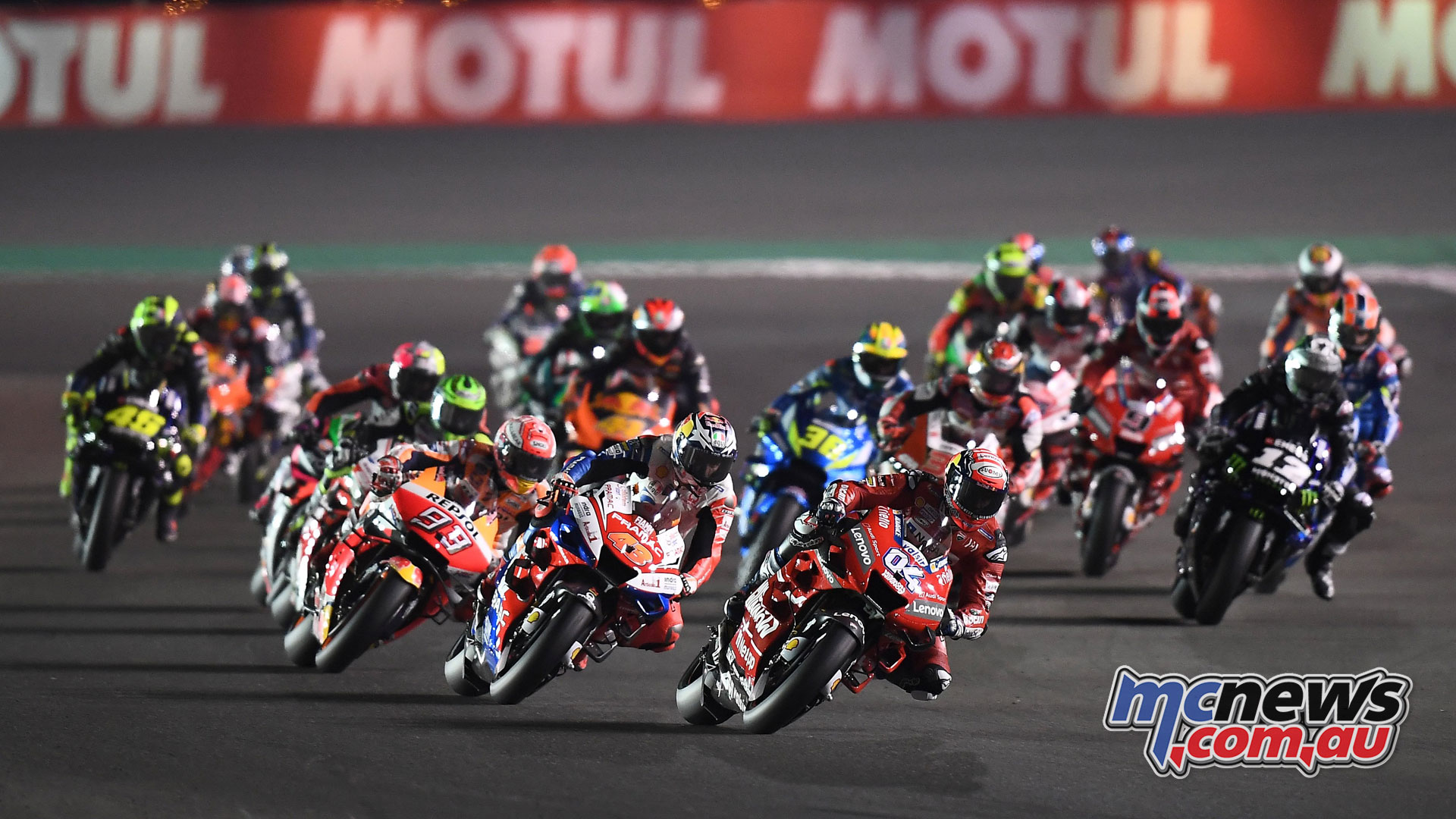 And if you live in Australia, then you’re watching the grid spear off into Turn One at 4am – an ungodly hour by any reasonable measure.

I watched Qatar from a motel bed in Bathurst, where I had pulled up to get some rest after a mad weekend of riding the Mitta Mitta-Omeo Road over and over like some kind of congenital speed-tard.

I was, of course, a little crushed Rossi had found himself back in 14th after destroying his front tyre in Qualifying. I had hopes for The Doctor after he topped FP1, but what could he do from 14th except depress me further? 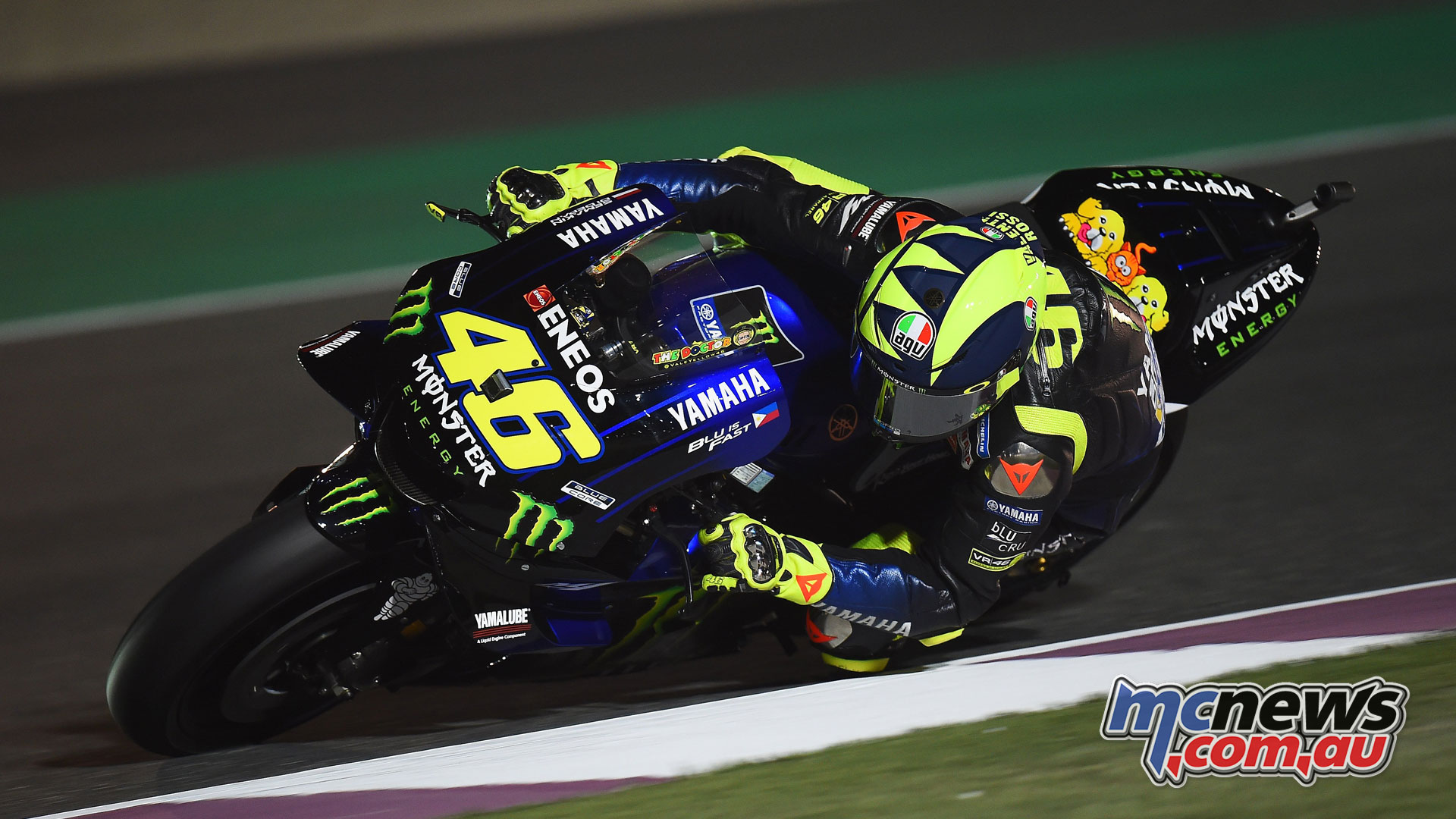 Hell, at least he was ahead of his mortal enemy, Jorge Lorenzo, who had crashed his Respol Honda during Q1, and was no doubt feeling every single one of his recently cracked and screwed bones as he sat on the grid listening to Shania Twain songs on his headset.

Vinales sat on pole. Whatever Yamaha had found during the off-season seemed to be working well enough to sit him on pole. What happened when the red light flicked off was what always seems to happen to Maverick. 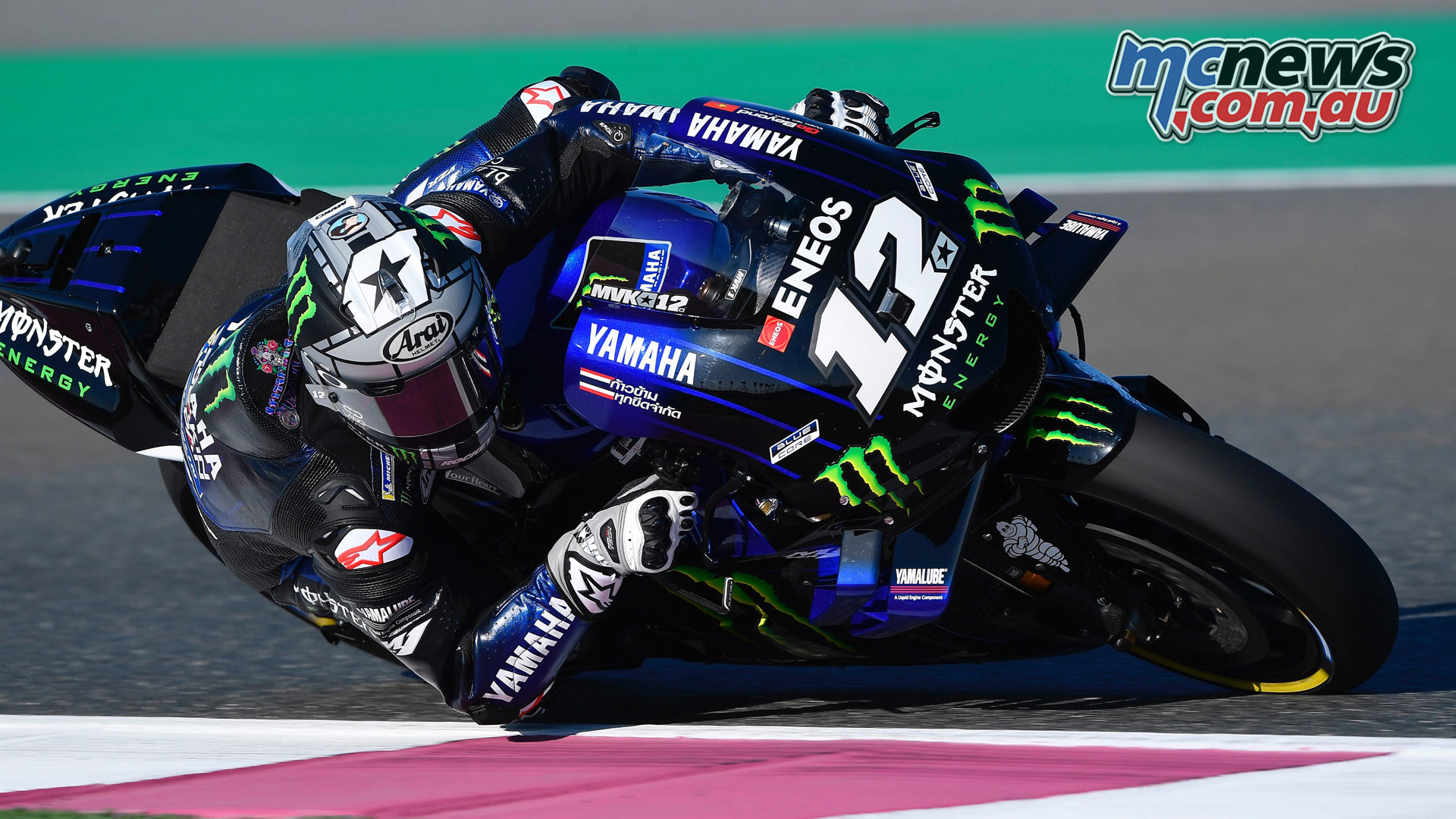 He thinks the first ten laps are warm-up laps, gets swamped, spends the rest of the race playing catch-up, then rides like 1000 bastards in the last three laps. Then Lin Jarvis yells at him for two hours after the race. It must be emotionally exhausting for them both.

Dovizioso and Marquez were also on the front row, while Jack Miller, rookie Quartararo, and the ever-hopeful Crutchlow filled the second row. Rins was back in tenth. 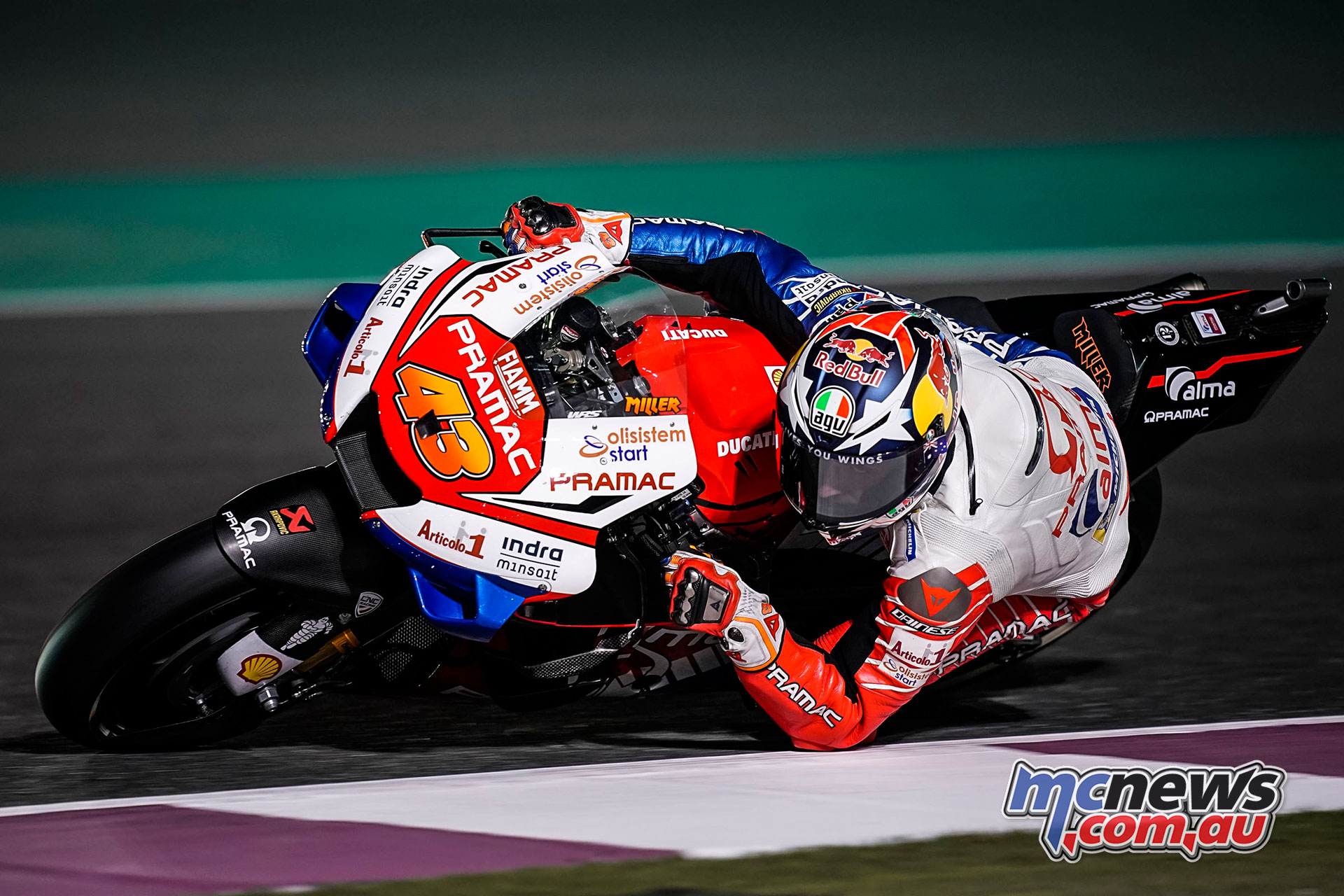 But very shortly after the start, Rins was looking like king of the universe, and Ducati was congratulating itself on having its new “holeshot launch” thingy working well – those Ducatis took off like missiles.

But just like Bologna’s fancy new swingarm aero-foil thingy, which is being examined by lawyers after the four teams complained about it, controversy is once again set to follow the Italian brand around this season, I reckon. 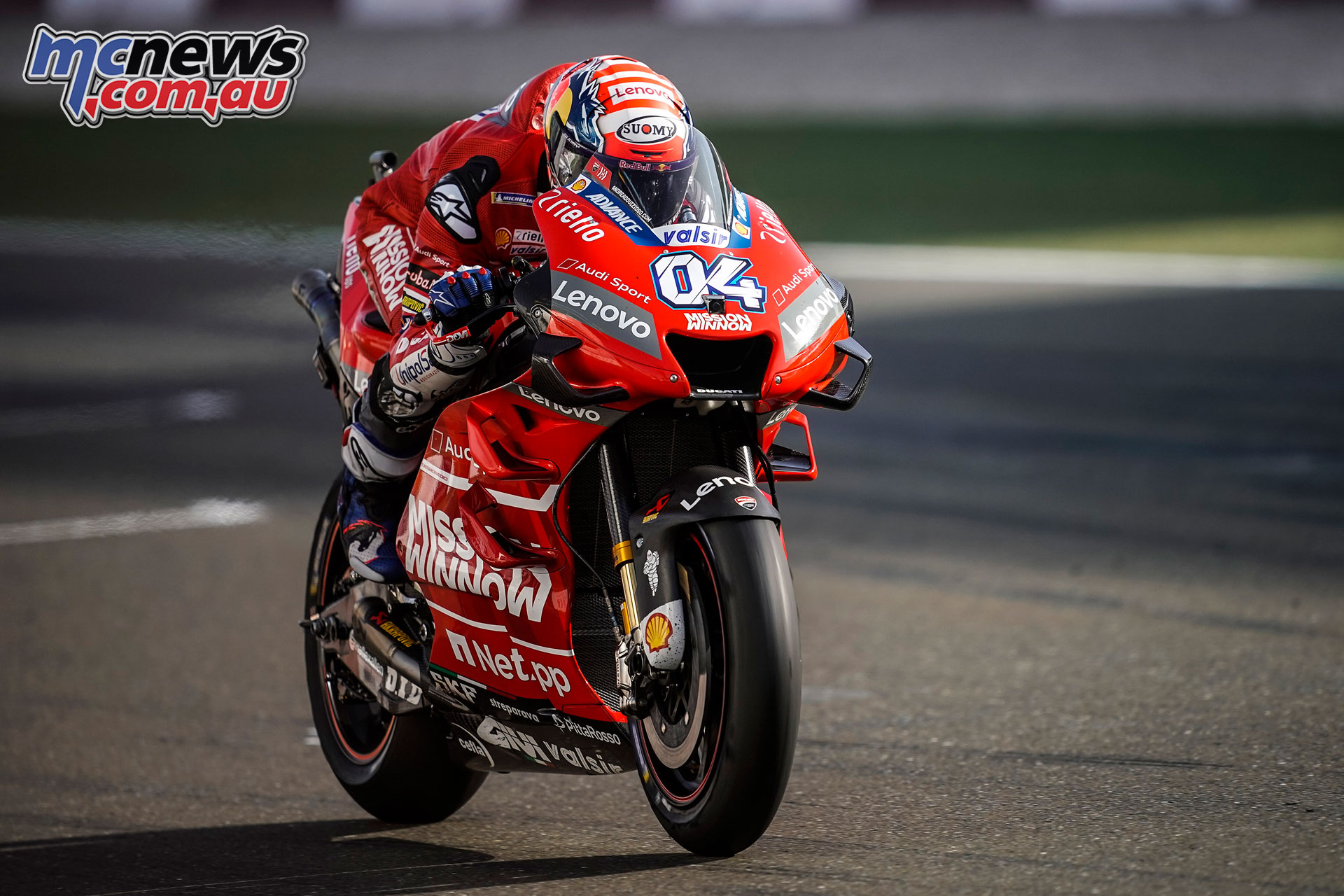 A few almost-terrible things happened on the opening lap. Miller, who had serious pace and was in second place just behind Dovizioso, threw his seat away. Apparently, the paint, the glue, and the witchcraft holding it to his Pramac Ducati failed and he pulled it from its wobbly place and pitched it into the desert. He then discovered one cannot ride a MotoGP bike without a seat and retired before something really terrible happened.

Quartararo stalled on the grid during the warm-up lap and got to start from pit-lane, which was perhaps not the debut the young gun was looking for. But he redeemed himself by riding to a not-so-terrible 16th place ahead of Miguel ‘Why Am I Even Here?’ Oliviera, a still-could-not-give-a-shit Abraham, a perennially hapless Rabat, and a dazed and confused Syahrin – all of whom did not start from pit-lane. 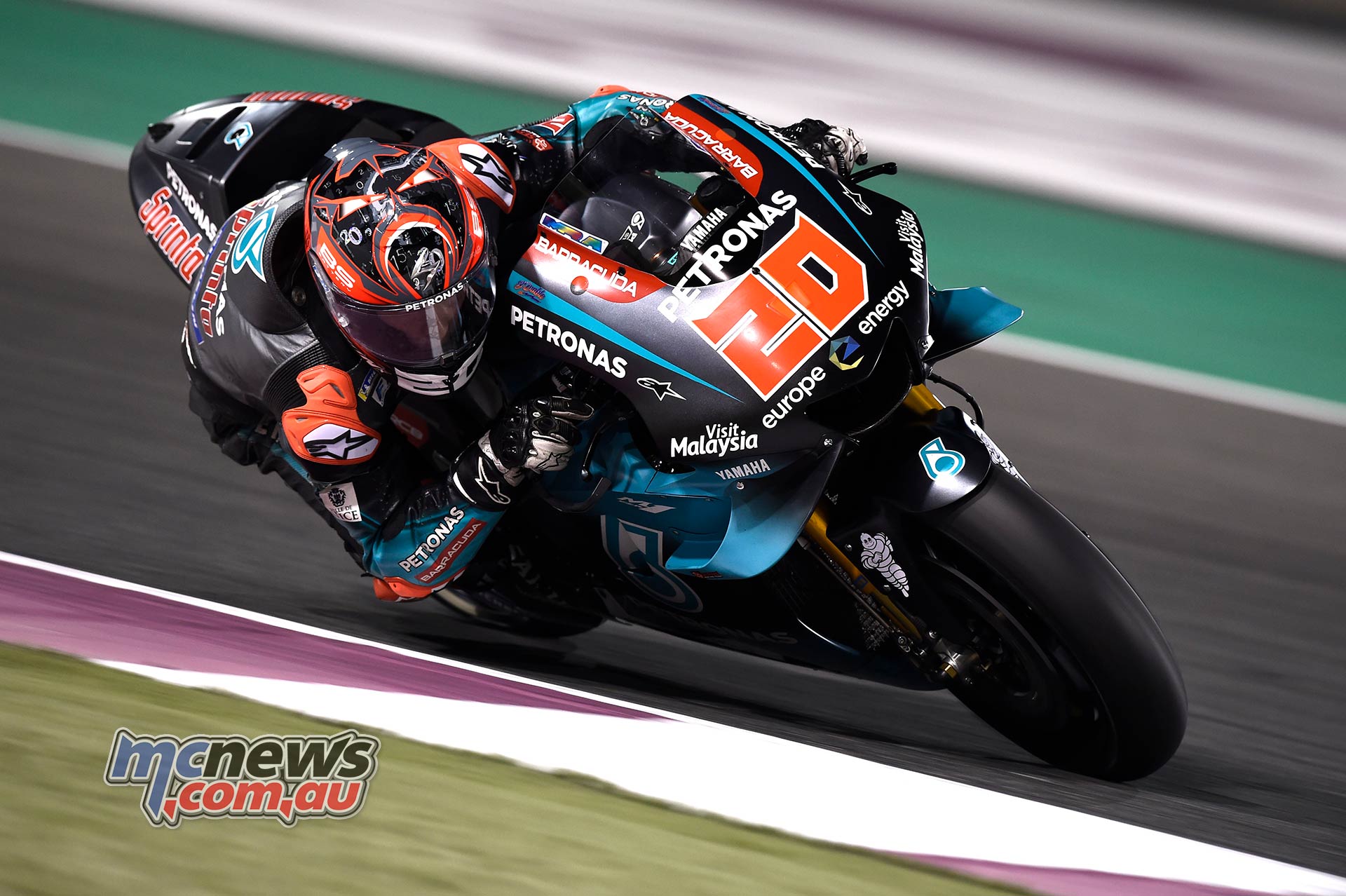 Up front, shortly after the field dodged Jack’s seat, the race quickly settled into a tight group of nine riders, with Rins steadily charging through the lot to take it to Dovizioso by lap five.

Rossi was the fastest man on the track while Dovizioso and Rins chewed on each other at the front, watched by a menacing Marquez, and The Doctor slowly but surely worked his way through the field.

At the halfway point, the top ten riders were separated by less than a second, and it was a subsonic procession of nerves and planet-sized balls in the desert night.

Crutchlow, who had not ridden a bike since last year, looked to be carved from grit and determination. Cal has eaten most of the gravel on most of the tracks, so that would be the grit. He was determined not to eat any here, which was the determination. 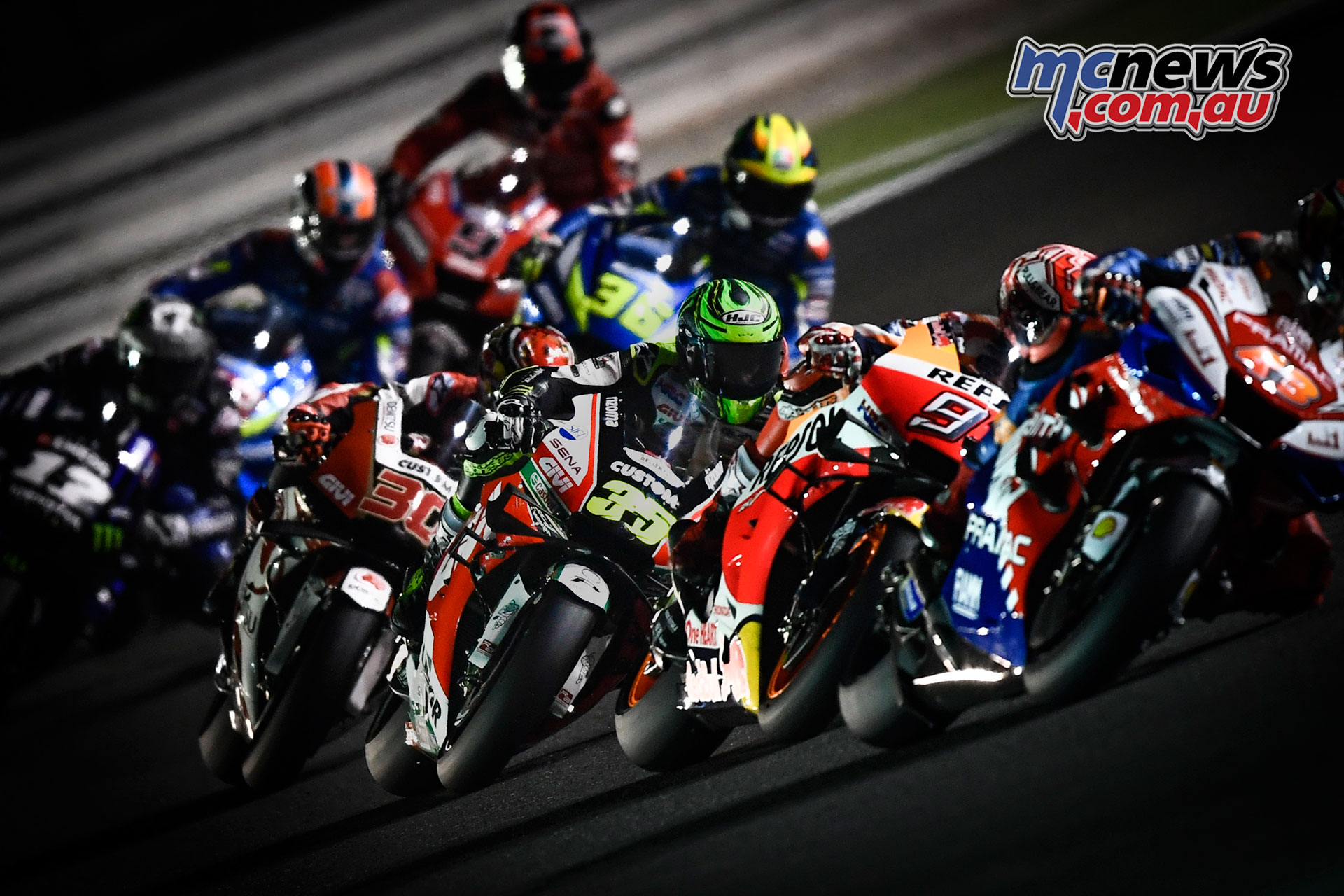 As the race wound itself into the closing stages, the inevitable happened.

Dovi, who had kept the pace down deliberately while toying with Rins and letting him lead now and again, turned it up. Marquez followed. Rins, who had convinced himself a victory was possible even though the Ducati kept hosing him down the straight, finally crumbled, overcooked a corner and let Marquez and Crutchlow through. Uncharacteristically, Cal did not crash at this point (which further upset Rins), but kept his nerve to finish third. 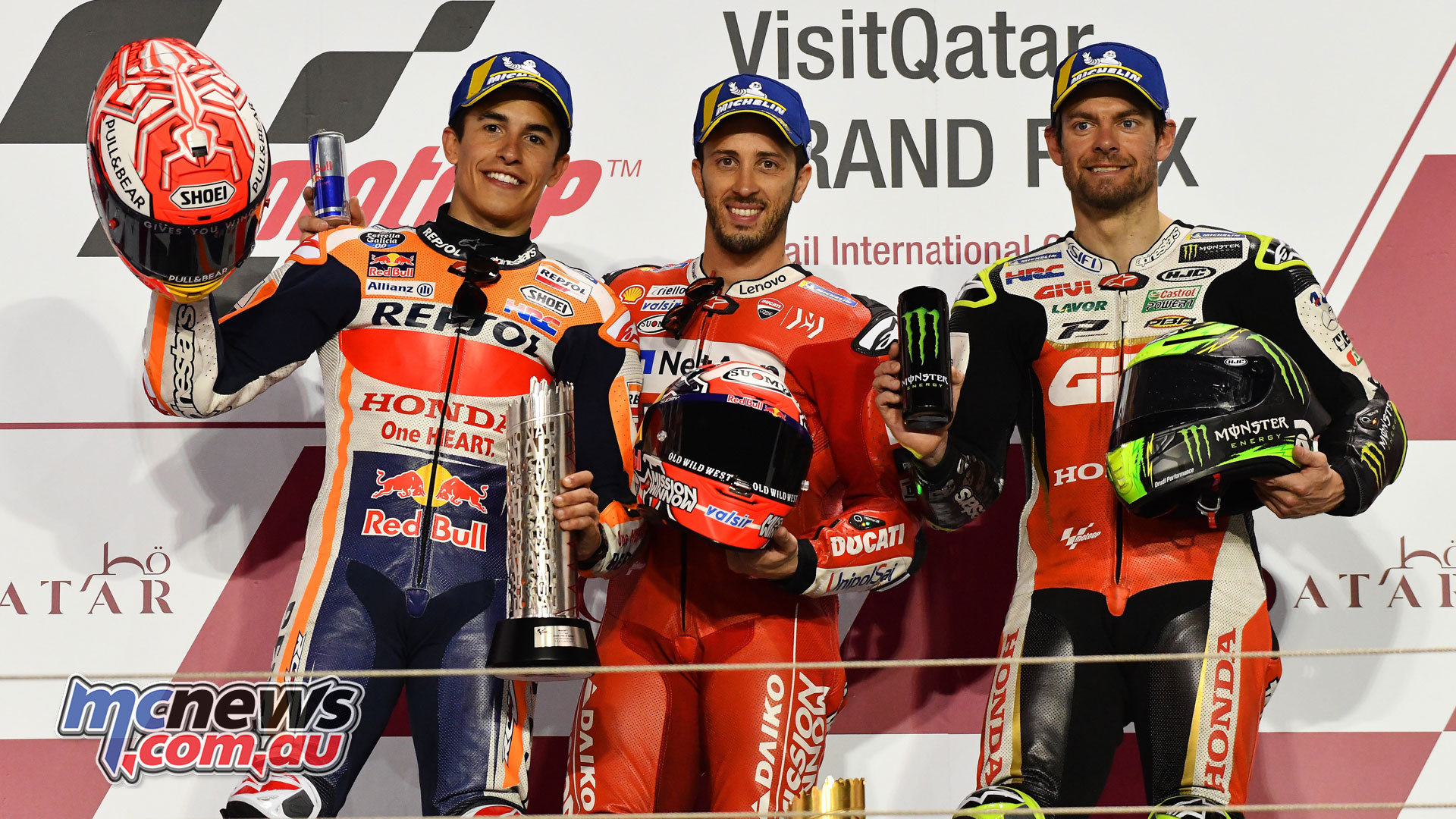 Behind them, Rossi had ridden brilliantly and was now in fifth – a staggering achievement from 14th on the grid. He finished two places ahead of his team-mate who had been on pole, which no doubt made for some wry grins back in the garage before Jarvis started putting the boot into his Number Two rider.

Victory was once again a death-match between Marquez and Dovizioso, and they finished much like they did last year – a few hundredths of a second apart after do-or-die lunges by Marc in the last corners. The World Champion is nothing if not predictable there, and Dovi is nothing if not prepared for him. So he beat him again. 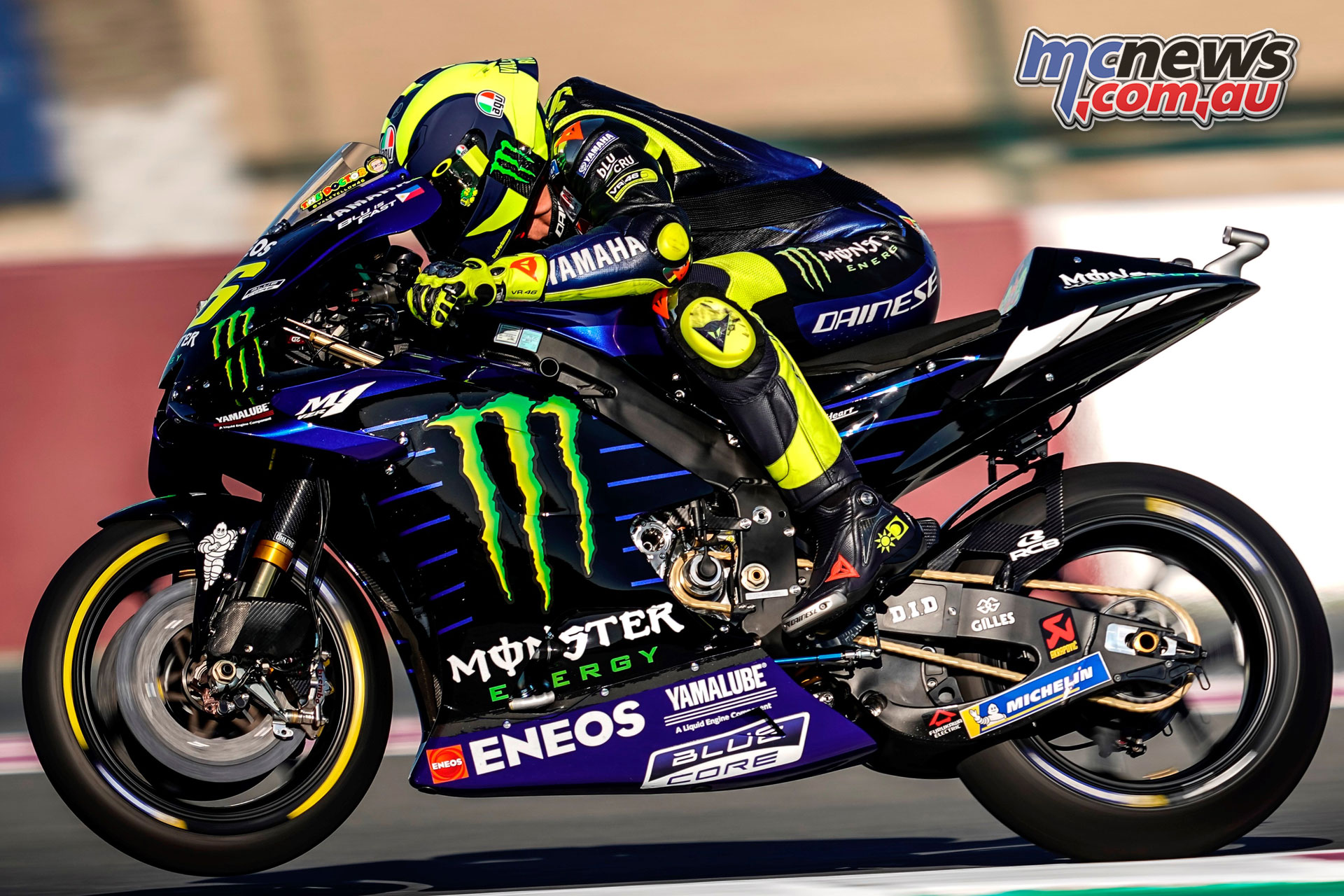 But it’s Qatar. And while it counts and it’s official and I got up at sparrow-fart to watch it and would again in a second, it’s still a novelty race as far as the riders are concerned.

This probably accounts for why Iannone threw his bike into the sand on the warm-down lap. Or maybe one of his monkey-gland lip-implants exploded. We may never know.

I hope he’s better by Argentina.