Broc Pearson is yet another young Australian road racer with talent, who is taking on the challenges of one of the most competitive motorcycle road racing series currently on the globe, the Asia Road Racing Championship.

Broc Pearson takes it away from here

It was a very long and eventful weekend for us at Suzuka Japan, where we raced in round three of the Asia Road Racing Championship in the 2 Hour team endurance race.

I was very fortunate to be teamed with Indonesian Febriansyah Qifli as he is a rider with very high understanding on the CBR250 and a rider with loads of talent, I couldn’t have been happier to be paired with him for the weekend.

We departed Brisbane airport Wednesday evening and arrived in Japan early Thursday morning, where we were greeted with beautiful sunny weather.

Throughout Thursday, I spent the day settling in, but it was quite easy as the climate is relatively similar to Australia. I spent some of the day inside the hotel, and some of it at the local mall, where I had some afternoon tea and dinner before getting a big nights sleep.

Friday was an unbelievable day for me and it boosted my confidence through the roof. Last year I really struggled at the amazing Suzuka circuit, in the dry conditions I was an average six-seconds per lap slower than the fastest riders, and I was really nervous not knowing if I could bring the lap time down.

In Fp1, I shared the session with Feri, we were bike #112 for the weekend and as that isn’t my usual number, I didn’t take any notice when I saw it on the tower timer. We only had six laps each and I remember looking up on lap five and seeing the number “112” in 3rd position and I thought “Is that me? Omg yes it is!!!” That was an awesome moment knowing my times were up there, and instantly I had dropped six-seconds from the last time I was on Suzuka. I made a pit on lap six and jumped off the bike to let Feri finish the session, he did a great job running my set-up for my weight and he was only a couple seconds from the lead. Hiroki Nakamura and Hafiz Azman were the riders to beat as they set the benchmark early by topping the sheets in FP1.

FP2 was rode by Feri, he tried out some different suspension and gearing settings, he was able to figure out the positives and the negatives with the setup as he rode the full 30-minute session by himself. He completed his fastest laptime of 2:46.7  which put us in p15. It was a great lap time when riding with the incorrect gearing and standard mapping. Local Japanese team bike #68 lead the session with a 2:42.9. Big news in the session was Hafiz Azman who crashed out with a fractured wrist, he had been paired with Hiroki Nakamura and they were the team to beat and #1 and #2 in the championship standings. This had forced the pair out for the endurance race.

FP3 was my time to shine and that’s what I did. I had a very enjoyable session trying out a new gearing ratio which was definitely better then the previous combination. I used the track time to follow the Japanese local riders as much as I could, to watch and learn the fastest lines around the Suzuka circuit. I was stoked to drop my times by another half-a-second, despite not getting many laps, as I entered pit lane three times to make some adjustments to the rear suspension as it was too firm, and I was getting too much rear end sliding in the corners. 2:43.9 was a great lap time for me and I was very happy with i,t but I knew I had to bring it down again as Hiroki Nakamura was the pace setter with a 2:41.9.

Up early Saturday morning for the qualifying session. My team and I decided that it was a good idea to change the gearing one last time to perfect it for the track as we tuned in the engine mapping to pull the gearing where it was needed. Qualifying got underway and I tagged right on the back of Hiroki Nakamura, as I knew he was going to be the man to beat. Lap 2 was my first flying lap, tagging right on the back of Hiroki as he and I both set our PB lap times of the weekend, Hiroki went to the top as I went straight underneath in p2 with an almost identical lap-time.

Strategies were going through my head, “how do I get this kid off the top spot, should I try and attack a lap-time using slower riders?” And that’s what I did. I slowed up off the race line and waited for a group of slower riders and gave them a couple second gap before the lap started, throughout the lap I perfected all my corners and had the riders ahead timed perfectly for slip-streaming on the final lap. At the end of the session I had managed to drop my PB to a 2:41.9 still not able to beat Hiroki who dropped to a 2:40.5 but, unfortunately, I did not realise that Woraphod from the Asia Dream Cup Thailand team had also used me for a good lap-time, which bumped him up from 12th to second, placing me third in qualifying.

Feri had a better session as he brought his times down to a 2:44, which just secured us a spot on the front row for the 2 hour endurance race.

Later in the afternoon I commentated the AP250 category, which was a sensational race won by Thai rider, Apiwat, and included Australian rider Jack Mahaffy.

We awoke Sunday morning to be greeted by dark clouds and wet weather, which didn’t worry me as I enjoy the wet, but I was rather enjoying the dry conditions throughout the weekend.

It was a short warm up on the Sunday morning in the rain and we softened up the suspension to get some more grip and just adapted to the conditions in the 15 minutes we got on track and I was very happy as my team mate Feri was great in the wet and we finished the warm-up inside the top 3.

Race time came and I was standing on the grid, 10m away from my team mate Feri who was holding my bike on the other side of the track, I had never done a Le Mans start, not to mention doing one in the pouring rain which made it a bit more nerve racking. Countdown came and off we went, I sprinted to my bike, hit it into gear and I managed to hold my 3rd place qualifying  position and stay in a comfortable position for the start of the race. 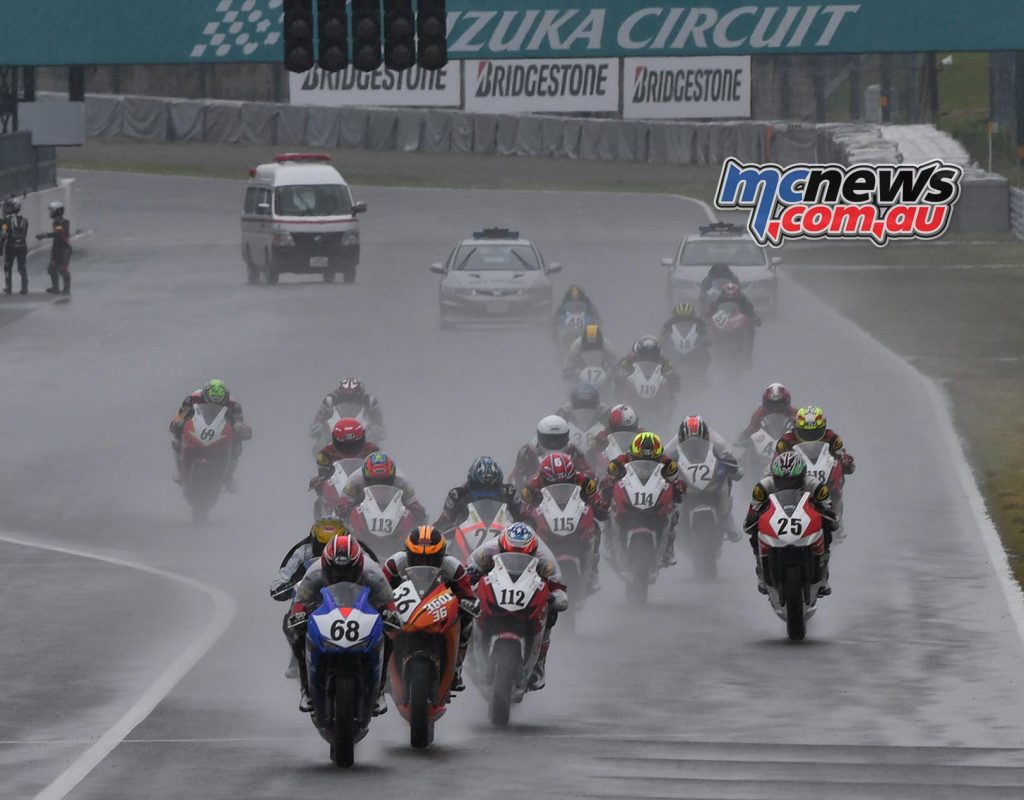 On lap two I dropped to 4th position, the three riders ahead were all local teams. All of my fellow ADC pairs had fallen behind and it was myself trapped in with three local Japanese riders. Countless laps went past and I had stretched at least half-a-minute over the rider in 5th place and I was ahead in 4th, with the bunch of the top three riders who were all battling it out for the lead.

The track was flooded with standing water and the bike was sliding around all over the track, I couldn’t relax for even a split second, otherwise I would find myself on the ground. With the humidity of Japan and all the wet spray of the bikes ahead, I started to get some significant fog on my visor and I was struggling too see, which caused me to make a few mistakes with loss of focus.

By lap 10, I decided that I needed to get out of the spray of following the leaders and get to the front, I put the hammer down and got myself to the lead but I was sliding constantly and the fog kept getting worse, I had no choice other than to slow down, dropping back into 4th.

Lap 25 was where everything went completely wrong, my visor was completely fogged and I couldn’t see anything, I had a three-minute lead over the next Asia Dream Cup rider, which would’ve picked me up the win and enough points to move up into 2nd in the championship but it all went wrong at turn 9. Coming through turn 9 I had lost all vision of the track when mid corner I hit the wet paint and high-sided into the gravel. I couldn’t believe that it had just happened, and instantly I got up and ran to my bike, which was covered in mud lying in the gravel. I sprinted to it and picked it up but the bike was giving no response as I tried to start it. I was saying…. “please, don’t do this, not now.” Then the instrument lights came on and the bike started, I was furious and was trying to get the bike out of the mud but the tyres were covered in slop and I couldn’t get out. At least three-minutes went by before I got out of the mud and back on track, we had dropped to about 14th overall and 6th in ADC. I quickly finished the lap and entered the pits immediately my right handle bar was bent down and I wasn’t able to use the front brake. We got it fixed and I got back on track straight away to finish my hour on the bike to hand it over to Feri to finish the race.

Feri did an incredible job throughout the final hour he rode, despite the crash and losing major positions, he never stopped trying. Turning the fastest lap of the race and charging through the field, at the same time he amazed me as he tried to recover and get back onto the podium which I had thought to be gone.

I had already removed my leathers when a staff person said, “Broc, you should get back into your leathers because you may get onto the podium,” and that’s what I did, back into my leathers with my fingers crossed.

By the end of the race, Feri had crossed the line in 7th Overall and 2nd in Asia Dream Cup to get us on the podium.

I was very excited to get back on the podium and move into 2nd in the championship. The race was won by a local Japanese team Seiji Maeda and partner Yoshiharu Okada. The top ADC team to cross the line finished in 6th which was the Vietnam and Singapore team of Bui Duy Thong and Azhar Noor. 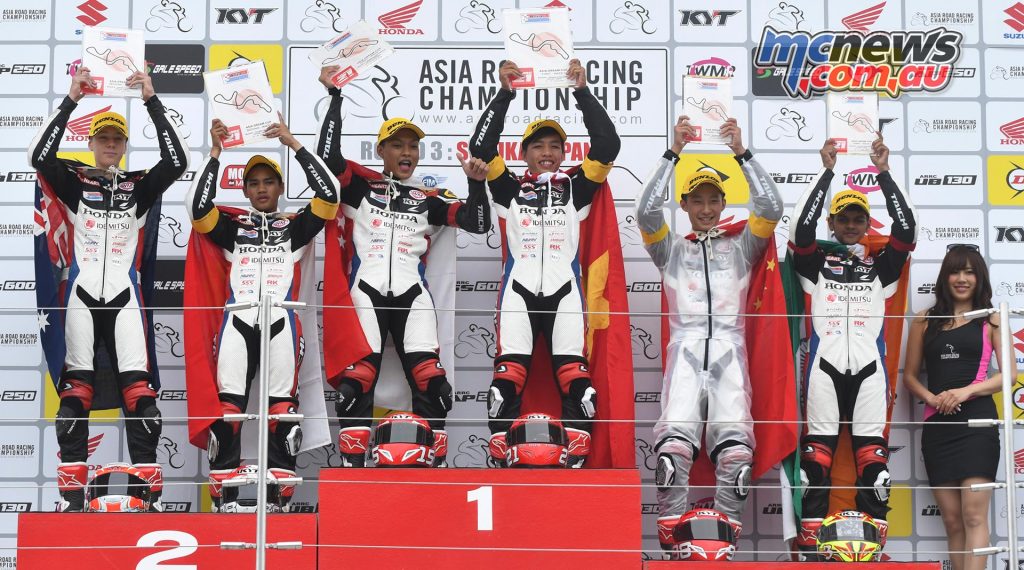 I am really looking forward to round four, which will be held at Sentul in Indonesia in a couple months time, where we hope to start hunting down championship leader Hiroki Nakamura.