Australian riders were in winning mode at Round 5 of the 2016 FIM Asia Road Racing Championship at India’s Buddh International Circuit. Anthony West eﬀortlessly scored a double win in the SuperSports 600cc class, the Australian national anthem rang out again when 15-­year-­old Broc Pearson stepped up onto the top of the Asia Dream Cup podium to make up for a DNF in Saturday’s opening 7-lap bout. 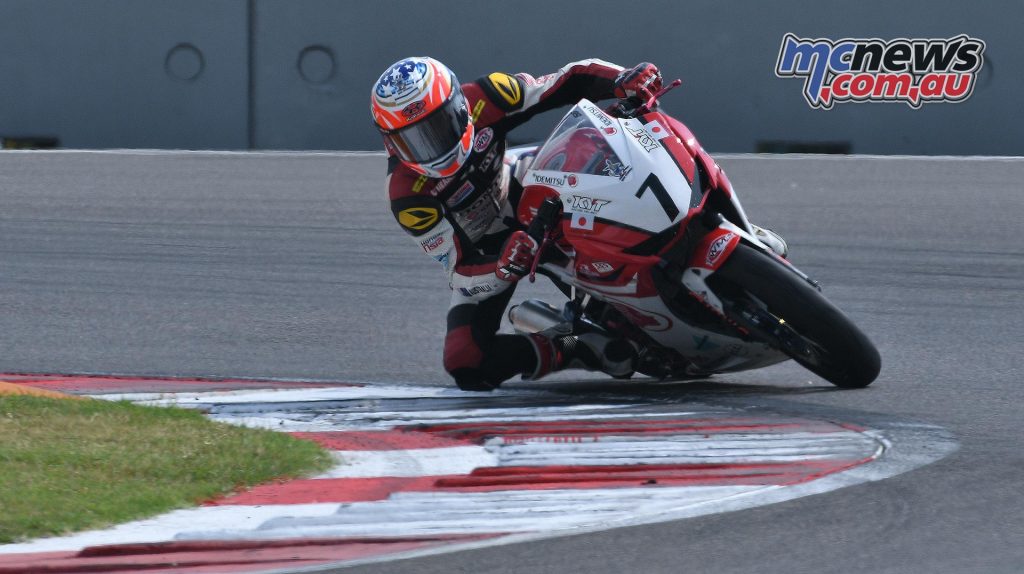 Overcoming his height and weight disadvantage, Broc looked extraordinarily determined as he powered his bike into turn one for the holeshot on Sunday.

Hiroki Nakamura, Sittipon Srimoontree, Haﬁz Nor Azman and Mohd Febriansyah rode up to challenge his position, Broc and Nakamura touched on lap two, and dropped to fourth and ﬁfth respectively. However, both riders were able to make up for lost time and Broc muscled his way up to the front on Lap five. 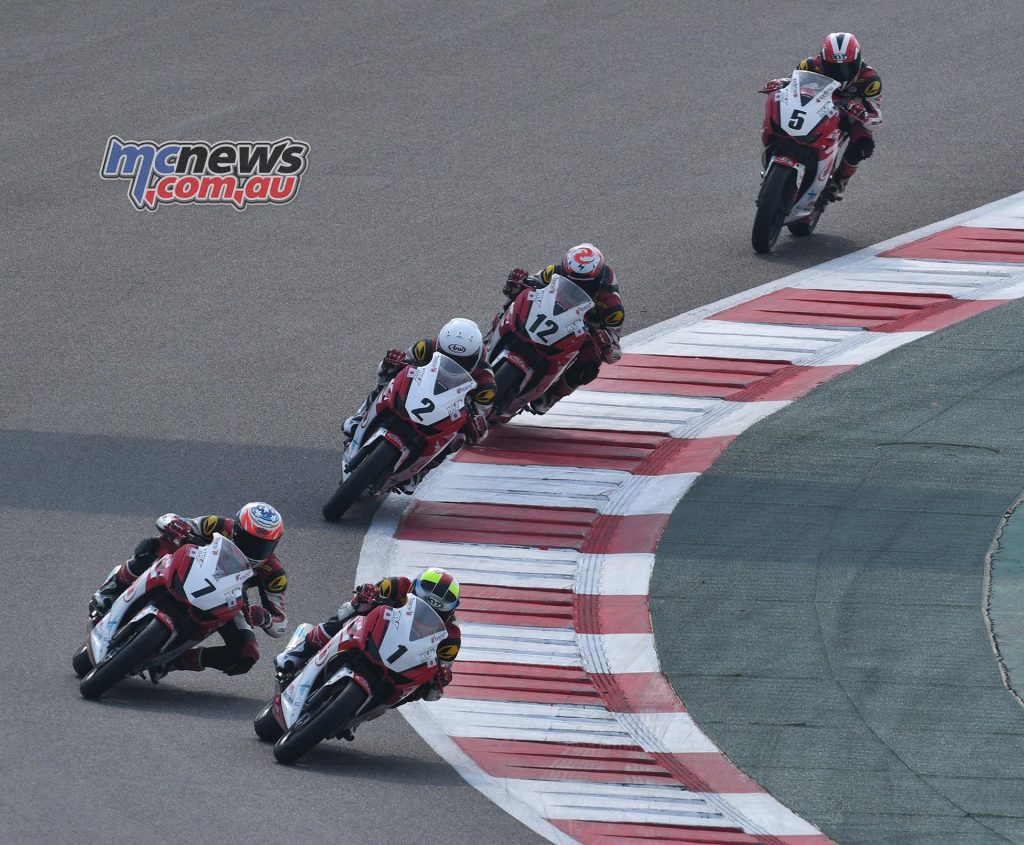 In anticipation on of the ﬁnal lap battle, the competiton hotted up on lap six and after a momentary hiccup lost him some ground the young Queenlander recovered well.  Gaining conﬁdence from the experience, the determined youngster out-sprinted Sikpon and Haﬁz Nor Azman to the ﬁnish line.

“There’s no better way then starting the day off with been fastest on the timing sheets and that was just what I did when round five of the Asia Road Racing Championship got underway. I used FP1 to just learn the track,  a few laps in I remember thinking, ‘there’s a lot of rolling speed corners and I think that’s just perfect for my weight, as it’s easy to keep my rolling speed going”. I was happy to finish the session in 3rd despite just learning the track. FP2 I knuckled down and really started to push my limits to find the limits of the track.

“I set a flying lap on lap 4 of the session, I crossed the line going ‘wow, that felt like a fast lap’. I took a glance to my left to the big screen and seen my name in P1 and +1.2 seconds from the next rider. I took the rest of the session to work on bike set-up and didn’t set another real qualifying style lap, but still finished in P1 by half-a-second. 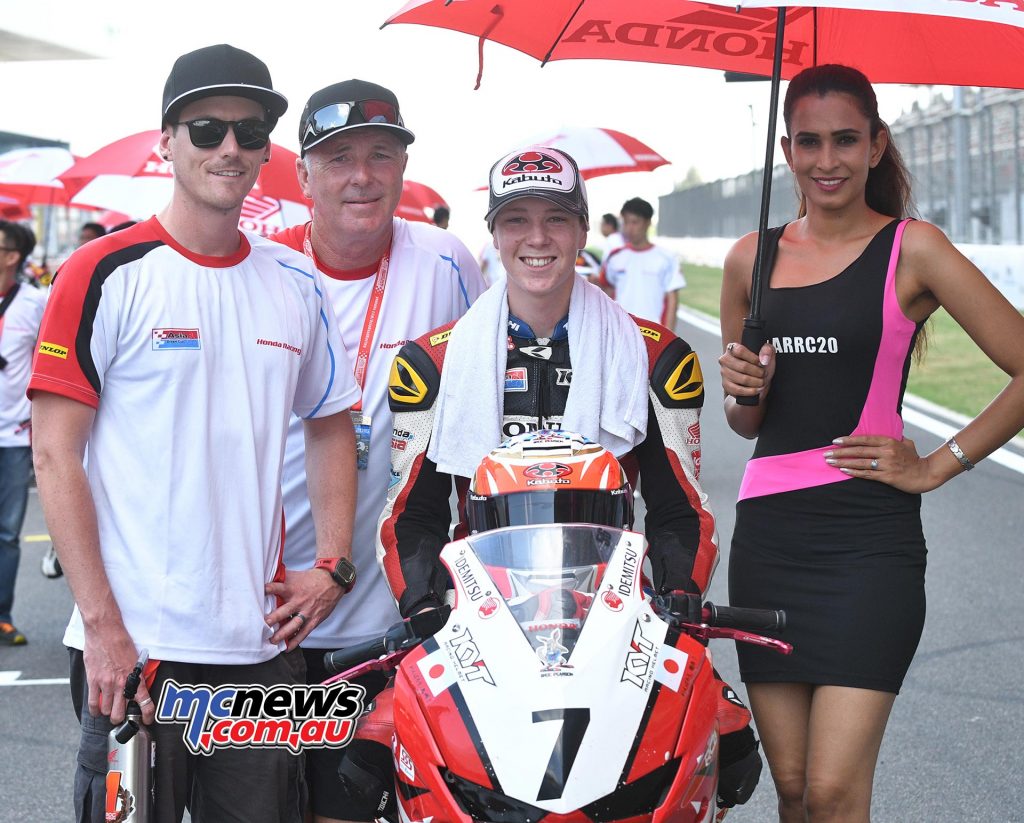 “We kept the ball rolling Saturday morning as qualifying got underway, the session was tough as their was so many riders on track and I had a lot of riders trying to follow me for a good lap which made it tough for me to set a clean lap. I set a fast lap with a few minutes remaining of the session but I felt it wasn’t fast enough for the top three so I just kept pushing, every other lap was problematic due to the amount of traffic on track. I went across the line with only the one lap I had put in but I wasn’t happy with it and was scared to glance at the big screen to see my position, I had a look up and was amazed to see I had taken pole for my first time ever in the Asia Dream Cup. I got into pit lane and said to my dad and Alex (Cudlin coaches Pearson), ‘I can’t believe that was a pole lap, it didn’t even feel fast, I thought I wouldn’t have been inside the top five!’

“From that high we were devastated in race one. It got underway nicely as I got the holeshot into turn one, and was able to hold onto it for a few corners until we reached the back straight where I was passed by a couple of riders. I tried to break away from the group but I wasn’t able to make it work, so I settled into the pack until I saw Hiroki split himself from the group. At this point I was running 6th and it was the beginning of lap 4. Half a lap later I was in second place and charging towards Hiroki but then entering the second last corner, I went in too deep and lost the front under brakes. Sliding along the ground, instantly thinking, ‘that’s it, championship battle is gone, what have I just done’. I was in pain but I had no other option to get back on the bike and finish the race, I knew I was 19th which wouldn’t score me any points but with chances of others crashing there was no way I was giving up. I’ve been in Asia Dream Cup for two seasons now without a single DNF, so I had to push on. Unfortunately I crossed the line with no points but it was my fighting spirit that counted and I had to focus on tomorrow’s race.

“Sunday was the best day of my life and I will never forget it. I went out in the warm up session just to check my bike over from Saturdays crash. Everything was okay so I just rode around to get comfortable again and wasn’t concerned when finishing warm up in 7th. Race 2 got off to another cracking start with the holeshot again, but I was shortly overtaken again on the back straight, my plan in the race was to never leave the top 3, just in case someone tried to split the group that I would be going with them. On lap 3 I had a huge moment went both me and Hafiz overshot the corner, I had no where to go but into the rear of Hafiz’s bike, fortunately I was able to get rid of enough momentum to not make any damage and Hafiz and I were lucky to exit the corner with no damage done.

“Before I knew it, it was the last lap and I had half a second clear out front. Unfortunately I wasn’t able to hold it coming onto the back straight and was shuffled back to 3rd but soon recovered the lead a couple turns later. Leading into the last corner, I could see the front end of Sittipon and Hafiz on my inside and I knew no matter how late I was to brake, they would brake later so I braked early and let them up my inside so I could get the fast exit speed and as I thought, they ran wide in the turn and I shot up the inside to take my first ever win.

“I crossed the line cheering in my helmet and as the commentators said, I was one excited boy. This was the best day of my life and I can’t thank everyone enough for supporting me and never giving up on me, major thanks to Alex Cudlin for always having my back and helping me out. Most importantly, thanks to my family for always supporting me and I could never repay everything they’ve done for me.”

The final round of the 2016 Asia Dream Cup will be staged in Thailand across the first weekend in December. Hiroki Nakamura has already secured the Asia Dream Cup 2016 Championship as the Japanese rider has an unassailable lead over second place Hafiz Nor Azman and Broc Pearson. Things are tight in the battle for second place and the top seven riders in the championship hail from seven different countries.