Shane ‘Shakey’ Byrne and Ryuichi Kiyonari are currently locked in a fierce battle for a record-breaking fourth MCE Insurance British Superbike Championship victory, but as the BSB title race reaches Oulton Park this weekend (8/9/10 August) Josh Brookes is on a mission to continue his winning form.

Byrne arrives at the BSB triple-header event in Cheshire leading the standings, but after twice missing out on victory at Thruxton last weekend the Rapid Solicitors Kawasaki rider is fully focused on leaving Oulton Park with a haul of victories. He scored a victory at the challenging Oulton Park circuit back in May.

Byrne said: “Oulton Park hopefully will be another good round for us; we have won there this year already earlier in the season. We had two second places at Thruxton, but because I want to be winning and we have been recently, finishing second last weekend seemed so difficult. I believe that is testament to what we have done so far.

“I want to get to Oulton Park and try and get back winning again and we have three races to do it; that is a big point’s haul for the championship and we need to nick them. For sure I think there will be some other riders up there this weekend but it would be great to get a win or three for Rapid Solicitors Kawasaki,” added Byrne.

Byrne knows he won’t have it all his own way, as at Oulton Park back in May Brookes scored his first win of the season, stealing the march on the triple champion by just 0.118s in the closest finish of the season so far. Australian Brookes heads into this weekend on a high, knowing that he scored a double win at the previous round last weekend for Milwaukee Yamaha.

Brookes said: “I think we can head to Oulton Park this weekend feeling really positive. Last time we were there we had a great win and a close second so I feel we will be ready to go for it again. Thruxton taught me a few things and with positive vibes in the team after the double win last weekend we are really looking forward to the three races.”

Kiyonari though remains the most successful rider in the BSB championship at the Cheshire circuit and the Buildbase BMW rider has proven with two wins and a further three podiums that this year he is ready to challenge Byrne to become the first four-time title-winner.

In close contention last weekend was Quattro Plant Kawasaki’s Dan Linfoot, who claimed his best result of his career with a brace of fourth places, whilst Lloyds British GBmoto Racing Kawasaki’s Chris Walker and Tommy Bridewell on the second Milwaukee Yamaha will be keen to return to the BSB podium in their quest for a Showdown position.

Graeme Gowland snatched the lead in the Motorpoint British Supersport Championship by a single point last weekend at Thruxton as he added to his winning tally. Now the Smiths Racing Triumph rider is pushing to stay ahead of his team-mate, Australian Billy McConnell, at Oulton Park.

McConnell, however, comes to Cheshire confident, having celebrated a double win at the challenging parkland circuit in May.

The charging Smiths Racing Triumph team-mates will have to keep Martrain Yamaha’s Alastair Seeley at bay, as the former champion is now just four points adrift of the lead after claiming the Sprint race win last weekend.

Luke Jones also proved again at Thruxton that he is ready to battle with the leading trio, scoring his first pole position of the season on the ultra-fast Hampshire circuit and following this up with second place in the opening race.

The closing pack of Luke Stapleford, Glenn Irwin, Luke Mossey and Jake Dixon are all also hunting for a return to the podium.

In the Evo class, Alex Olsen leads the title chase from Tim Hastings and David Allingham ahead of the two races this weekend. 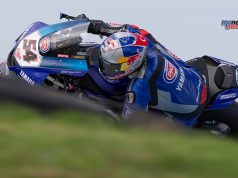