MCE BSB Championship leader Haslam had his momentum curtailed when he crashed out causing a red flag in the opening session of the day; he was knocked unconscious and has also fractured his vertebrae. Haslam is stable with no neurological injury but will take no further part in the event.

Glenn Irwin also crashed out of the opening session, the Be Wiser Ducati rider sustained shoulder and elbow dislocations, which have been put back in and hopefully he is expected to be discharged from hospital soon.

Christian Iddon was another rider to crash in free practice one at Knockhill, the Tyco BMW rider has a deep cut / wound / soft tissue injury over his elbow which will require a surgical procedure.

Luke Mossey fired the JG Speedfit Kawasaki to the top of the times after the opening two free practice sessions at Knockhill with a lap under the existing circuit record to hold off Shane ‘Shakey’ Byrne. However a crash in free practice one has sidelined MCE British Superbike Championship leader Leon Haslam for the remainder of the event.

Mossey had upped the pace in the afternoon session to fend off the attack from Byrne in the dry conditions, but the pair had traded blows at the top of the timesheets before the JG Speedfit Kawasaki rider emerged on top at the chequered flag.

The Honda Racing pair were in close contention this afternoon with Dan Linfoot closing in on his team-mate to complete the top five and nudge Peter Hickman on the Smiths Racing BMW back into sixth place.

James Ellison was the fastest of the McAMS Yamahas in seventh place ahead of John Hopkins on the Moto Rapido Ducati, Jakub Smrz and Sylvain Guintoli who returned from his most recent MotoGP duties to complete the top ten for Bennetts Suzuki.

Billy McConnell was 13th quickest on day one.

“It’s been a long time off the bike since the last round at Oulton Park! It was a bit weird this morning really with all the red flags and it is unfortunate for the guys who crashed. I was happy with P3 in the first session and if I’m honest I was just glad to get that one out of the way after seeing all the crashes! I felt good and the JG Speedfit Kawasaki felt good. This afternoon we got under the lap record and went quicker than we ever have done here. It’s looking good for us and I’m feeling confident for the rest of the weekend. The JG Speedfit team have done such a good job to get us where we are now. I am just looking forward now to the rest of the weekend and hopefully we can get on the front row in qualifying tomorrow and have two good races.” 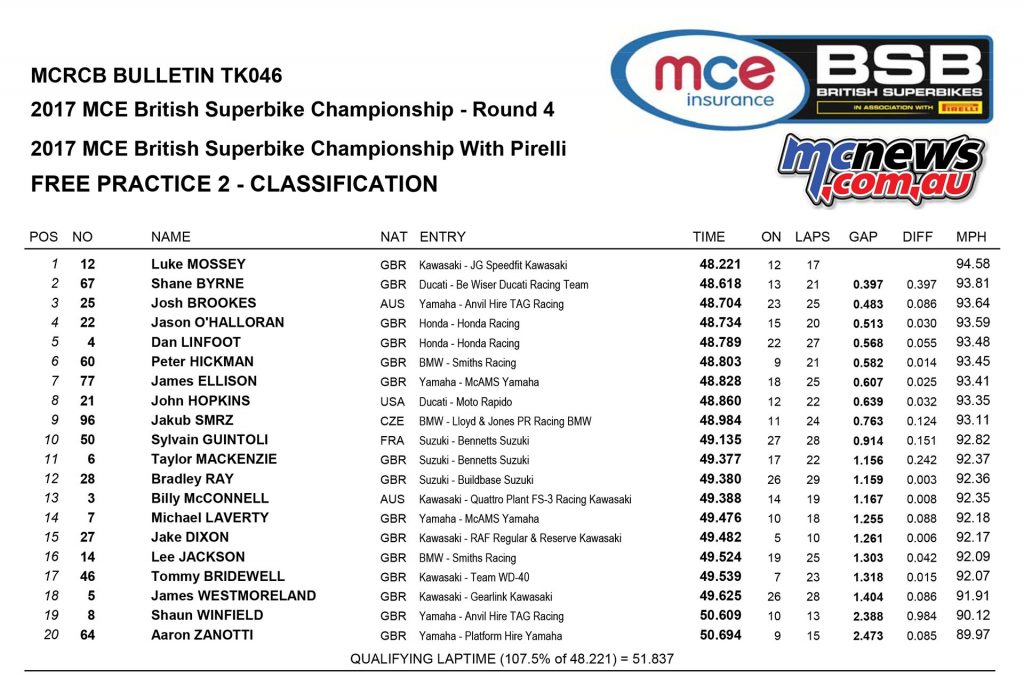 It was a Yamaha 1-2 in Superstock 600 with Ryan Watson leading the way. 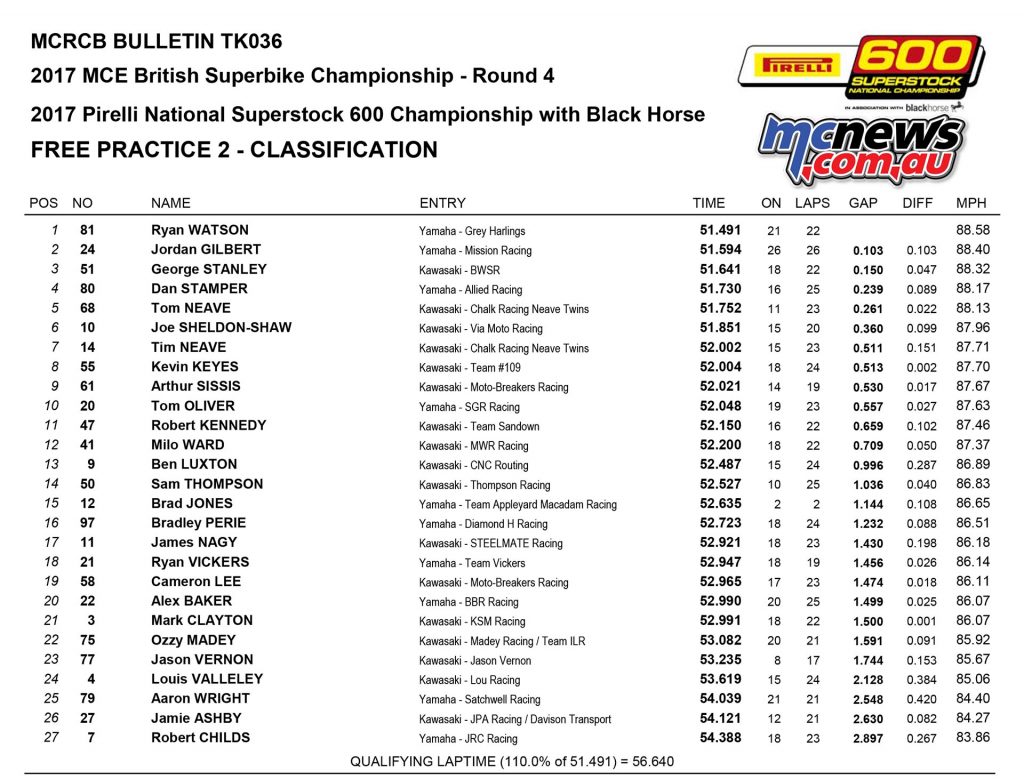 Danny Buchan topped Supersport 1000 pratice ahead of Richard Cooper while 21-year-old Chrissy Rouse made it a trio of different manufacturers in the top three. 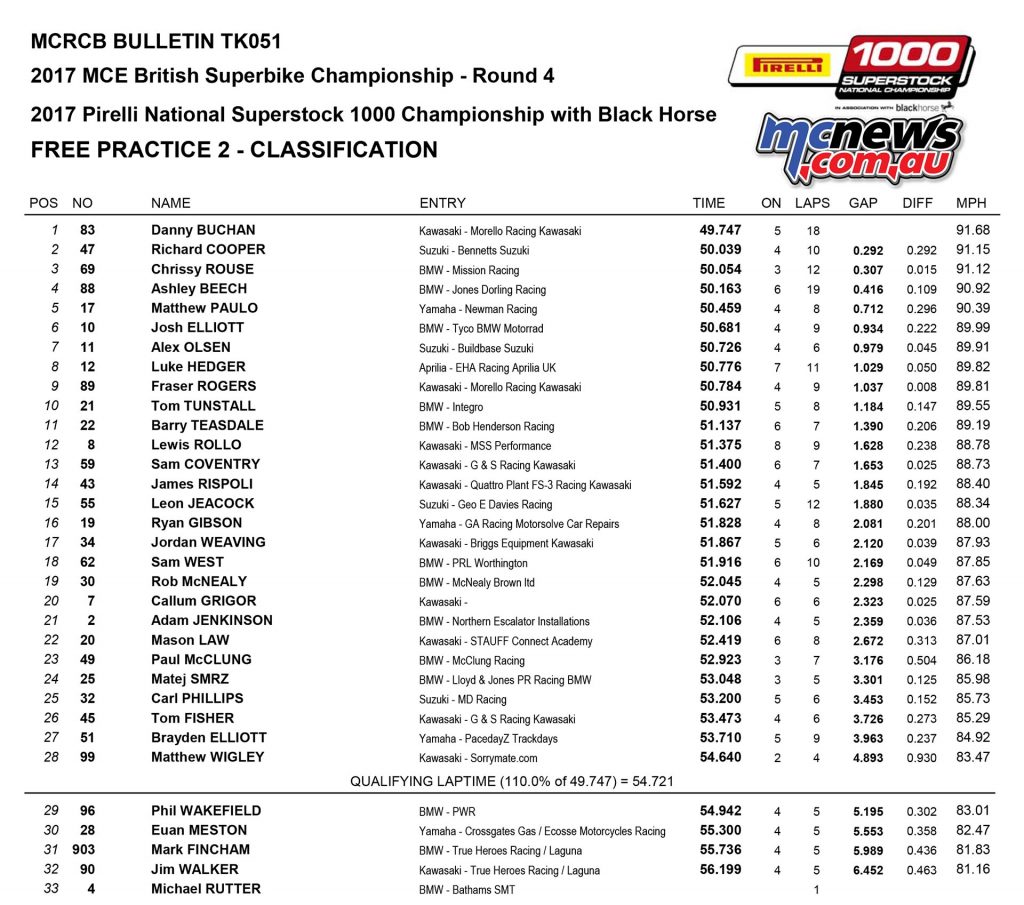