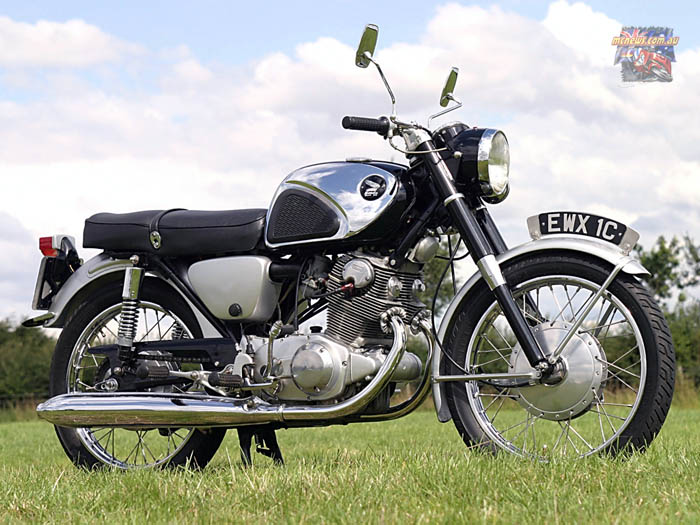 Today, it is difficult to imagine just how much hostility there was to Japanese motorcycles in the 1960s. Amongst us schoolboy aficionados, all the real enthusiasts were 101% British bike fans. We knew the script off by heart.: The Japanese made rice burners. They could never make a motorcycle bigger than 50cc. In fact, all Japanese motorcycles could be summed up in one succinct phrase: Jap Crap.

And yet the overwhelming evidence told a completely contrary story. Honda arrived for the 1959 TT with beautiful little DOHC 125cc twins which ran like turbines and won Honda the manufacturer’s team award at their first attempt. By 1961, when the CB77 was launched, Honda was running four cylinder works machines and producing road bikes of unparalleled quality.
Even so, the 305cc OHC Honda Superhawk came as a bombshell. It didn’t leak oil, break down or require hours of patient, loving care from its owner. Instead, you got on it, closed the choke, pressed the button and rode the Honda until you wanted to stop. In an era when any journey on a British bike contained the thrill of wondering whether you were going to break down, the Honda was a culture shock.

Sochiro Honda, who designed the Superhawk, meditated at Buddhist shrines in Japan to clear his mind and gain inspiration from ancient themes before putting pen to paper. The result was a bike which is uniquely Honda in look and feel – but with all the pragmatism of a product aimed at mass, world-wide sales.

The specification was stunning. There was, horror of horrors – an electric start! How we sneered. Did real motorcyclists want such an effete affectation? Well, of course they did! The brakes – a 9” tls front and an 8” rear – were so good that they were frequently grafted on to European race bikes. And the lights worked – even when switched on in the dark!

Of course, we knew for certain that there was no way that a 9,000rpm, 100mph plus, road bike could last more than a few weeks. But the Superhawks did. In fact, with regular oil changes, they ran forever and a day and all of their performance could be used all the time.

They were fun to ride too. The received wisdom was that Hondas didn’t handle but the Superhawk’s frame was a direct lift from the early race bikes and it worked a treat.

Now, the Superhawk still remains one of the most user friendly and reliable classics – and the most underrated. 40 years on, enthusiasts still prefer British bikes – emotion over logic once again.