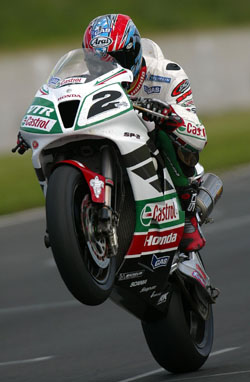 On Sunday July 14 Colin Edwards finished third in the opening race at Laguna Seca, USA ­ his dream of a home round double victory had disappeared. He now trailed championship leader Troy Bayliss by a worrying 58 points.

But, by 4.10pm that day Edwards had set the tone which was to be the trademark of his 2002 world title success. His Laguna Seca victory over Bayliss confirmed what many already knew ­ Edwards did posses the steely determination to ignore pressure and stare adversity in the face.

His memorable victory in the USA round launched his charge to the title, edging out Bayliss in the Californian heat in relentless fashion ­ eclipsing his rival’s first race winning time by 4.2 seconds.

“Looking back, that afternoon was one of the biggest of my career,” recalls Edwards. “I’d set pole position at Laguna on the Saturday, we had the starsand stripes livery for my home round ­ everything was in place for two wins.

“I had the edge in the first race that day but ran wide with about four laps to go and Troy (Bayliss) and Ruben (Xaus) came by. To finish third was souldestroying.”

Edwards, 28, continues: “Don’t ask what happened later that day, everything came together and the whole team went from despair to joy, it’s about as good as turning points get ­ all after the low point of my season in race one.”

From his Laguna launch pad Edwards then embarked on a remarkable run of victories, breaking records at every round as he proved that he was armedwith everything needed to clinch a second world title.

And, as the season drew to a close, the Honda Racing Corporation backed his ambition with a new, improved 999cc motor for the Castrol SP-2 machine. But Edwards believes the championship package was also complemented by other aspects of the team.

He reports: “My crew chief Adrian Gorst always had that desire in his eyes. If I had ever lost track of what we were chasing I only had to walk in the garage and be reminded of what I was paid to do.

“But I was taken by surprise when we arrived in Germany for the Oschersleben round at the end of August. We’d tested at Michelin’s test track in France the week before and that really got me dialled in after the August break.

“By Germany, our Showa technician Christian Kaye had been working on some new fork settings, Castrol had developed an improved oil and Michelin were proving why they are the biggest and best in the world.

“The improved engine wasn’t actually that noticeable at the Michelin test but when we arrived at Oschersleben the improvement on the previous year was incredible.

“It wasn’t at that point that I felt I could win the title but I certainly felt I now had what it took to win every race. That first one-hour free practice on the Friday morning at Oschersleben was the biggest boost I’d had all year.”

Edwards responded that weekend with a double victory and the tobacco-chewing Texan knew all the pieces of the jigsaw were in place for one last, concerted push towards the title.

Yet Edwards, more than anyone else in the World Superbike paddock, knew there would be one key factor in him regaining the title he won in 2000 ­ somehow getting the better of Troy Bayliss.

Edwards continues: “We did the sums in Germany and even if we were going to win all the remaining races we knew that Troy still needed a bit of misfortune. And I can’t fault the guy for being in that commanding position after a faultless start to the year.

“He beat Ben Bostrom and myself at Kyalami, got the better of me at Monza ­ two events where I thought we’d see a different race winner.

“I think my win at Sugo in the fourth round was important. We knew that Troy was struggling a little bit in qualifying but quite often that counts for nothing with him ­ he’s like a terrier when it comes to race day and just won’t give in.”

Edwards won the opening race at Sugo and took runner-up spot behind Honda’s Makoto Tamada in the second race but the Bayliss bandwagon was rolling on.

“The Silverstone round was also pretty significant for me,” Edwards recalls.  “I know it brought about all kinds of issues regarding Ducatis failing to cut out when they crashed but there was more to that round for me.

“I’d had a first and a second place that day, Troy had a fifth and a first. That evening I was still 29 points behind him when I felt I should have been closer. But Troy had nine wins from 12 races by that point, I’d had two wins and was little more than 25 points – or one race win – behind him.

“If I’d taken nine wins from 12 races and the next guy was little more than a race win behind me I’d be worried. I suppose that was the time in the year where I had to be mentally strong.

“I realised all I could do was keep piling the pressure on Troy and Ducati by just being there week in, week out. We’d started making some enquiries to HRC by then about the new motor and knew exactly what the plan was with those guys.”

Two runner-up places for Edwards in the Misano round in June were welcome, especially after an uncharacteristic third and 11th place return from the Adriatic coastal venue the previous year.

“Even after the Misano event we weren’t back on the top step of the podium but we were still there, in touch with Troy. We had belief that our day may well come ­ not letting his lead drift over 50 points became psychological.

That day came for Edwards in the 12th and penultimate round at the famous Dutch circuit of Assen. Edwards typified his resilience by powering out of a gravel trap on his Superpole lap to secure pole position.

Two wins, coupled with a second race crash for Bayliss, threw the championship wide open once more ­ the reward for Edwards’ efforts.

“When that happened at Assen I simply ccouldn’t believe it,” Edwards says. “I got the signal saying Troy was out of the race but didn’t know why. Those last few laps of racing at Assen used up about a year’s worth of concentration.”

The new World Superbike champion has clinched one of, if not the most dramatic title tussles of recent years. After Bayliss took six wins from the first six races all considered the championship over ­ all except the Texas Tornado.

“I do the easy part, I’m doing circles for a living,” states Edwards. “It’s the team I’ve got to thank. I’m working with probably the best guys in the business and they’ve all been awesome, all year.”