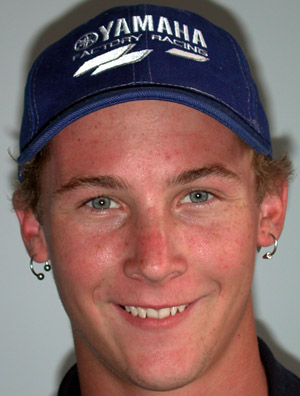 Craig Coxhell came to the Australian road-racing scene in 1998 at the Victorian Stars of Tomorrow. Riding a 250-production machine, received for his birthday the week before, he finished third overall in that event behind Peter Rebartes, and Rodney Taplin.

Craig then signed a two-year deal with Radar’s Team Yamaha. In 2000 Craig rode the Radar’s R1 in Australian SuperBike and stepped down to the smaller R6 machine in FX events. He earned fourth in Australian SuperBike Championship, and came second to Chad Turnbull in FX SuperSport. Coxhell was also named ‘Australia Rider Of The Year’ and received the RK Samurai Trophy.

In 2001 Craig continued with Radar, competing on the R1 in both Australian SuperBike and FX. He finished second in Australian SuperBike, behind Shawn Giles, and third in FX behind Robbie Baird and Jamie Stauffer. Craig also wrapped up the Victorian Titles and took the Harvie Wiltshire Trophy to cap off what was a good year for the young Shepparton rider.

Craig again signed with Radar for 2002 but this time the Yamaha team only competed in the FX Tri-State Series.

2002 started off on a reasonable note with strong race results in the opening three races of round one at Eastern Creek but Craig’s machine failed on the final lap while dicing for the lead with Kevin Curtain.

Then the FX series moved on to Craig’s home track at Winton. Here he finished on a high note with a second place in the final race.

Then the series moved back to Eastern Creek where Craig’s luck took a turn for the worse. In race one an electrical fault meant Craig could only come home in 18th position. He went out on the spare bike, a 2001 machine from the previous year, for race two but that machine ingested something in to the airbox which jammed a throttle slide open, Craig was left to linger at the back of the field in 18th position once again. The last two races were much better with Craig scoring 6th and 5th places.

Round four was held at Queensland Raceway, things were not looking good after a couple of problems during qualifying and some mediocre results in the first two races. But then some of Craig’s luck must have rubbed off on his competitors as a melee around the back of the circuit resulted in a few riders falling. Craig went on to take the win in the third leg before a wrong tyre choice made the final race a struggle for fifth place.

The penultimate round of the FX Series was at Sydney’s Oran Park circuit where Craig was somewhat disappointed with his performance. The results were far from bad, with a couple of 4th places and a 2nd in the day’s final race, which helped to make the round end on a brighter note. But Craig thought he should have done better, as the Yamaha was working very well that weekend.

At the exciting FX finale Craig took a fifth place behind three-time AMA Champion in the first race, came home behind Mladin again in race two for 6th place, followed by a 5th and 7th in the final races.

Overall Craig finished the 2002 FX season with fifth place overall, 18 points in front of Josh Brookes. Now most riders would be happy with a fifth overall in the FX Series, but, probably because of the previous success Craig had enjoyed over the previous seasons, he had come to expect better of himself.

“I was very disappointed with fifth overall. I would have been happier if I came home third behind Robbie and Kevin,”

“Unfortunately nothing really came together for me in 2002. When the bike was on the pace I was not happy with my performance and knew that at times I should have rode better.

“Then at the times I did really feel comfortable, we were unlucky enough to suffer some component failures. So we didn’t really show our full potential this year.”

Now Craig’s future lies elsewhere with a move to Team Suzuki in 2003, and big hopes for the future.

“Team Suzuki provide a great package and they have given me a fantastic opportunity for next year to compete in the full Australian Superbike Championship on a GSX-R1000,”

“I’m looking forward to learning a lot from both Shawn and Phil Tainton, who are both extremely talented.”

Craig is contracted to Yamaha until December and expects to race in the final round of the Australian SuperBike Championship next weekend, Nov 10, onboard a Bio-Magnetics Yamaha R1.